Here’s How Sally, the Porsche 911 Carrera in Pixar’s Cars, Was Made

Porsche and Pixar are teaming up on a new Sally-inspired build to commemorate the 20th anniversary of the beloved 996 of Radiator Springs. 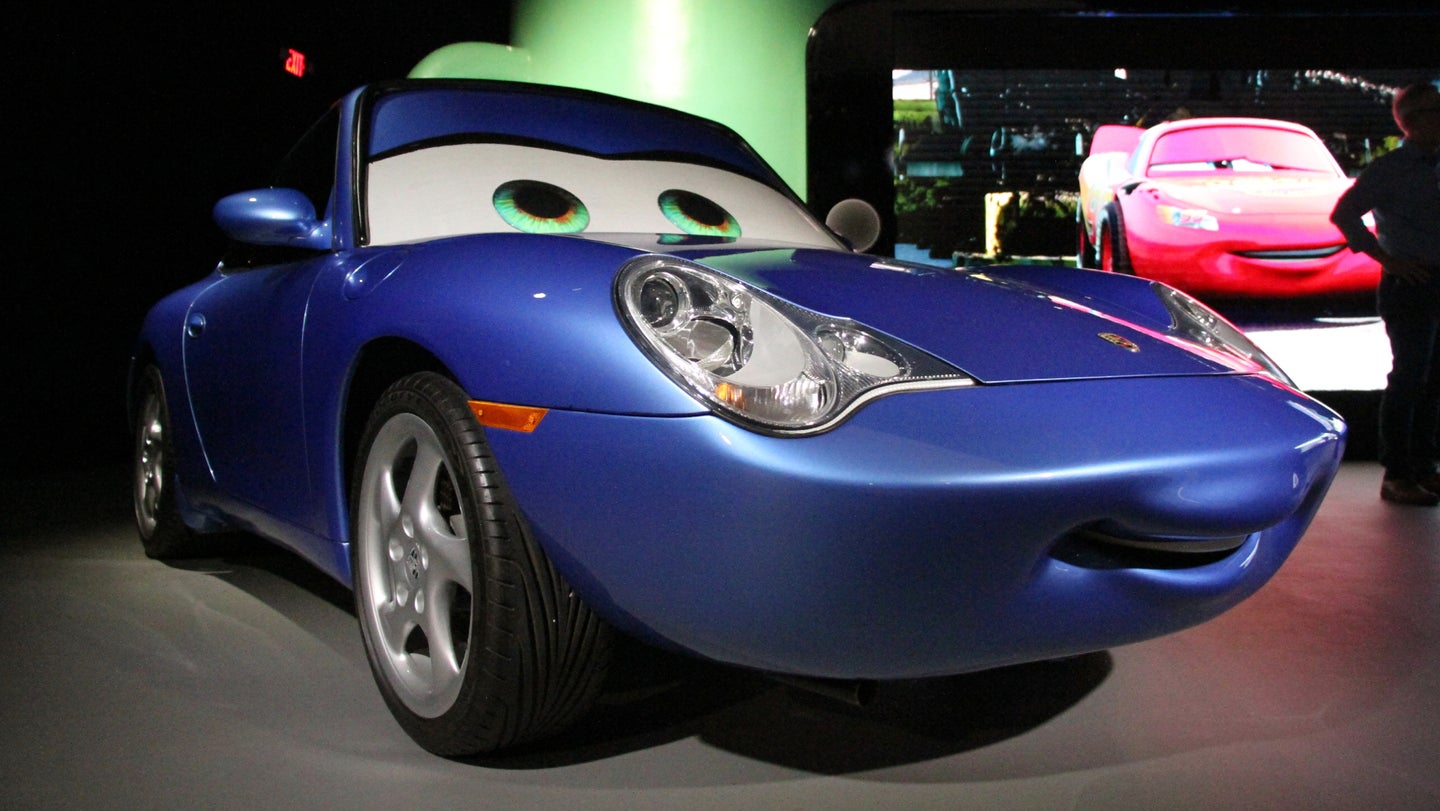 Between Pixar's in-house designs and the real-life models it's licensed from various companies, the Cars films are full of instantly recognizable vehicles nowadays. The very first of those licensed models was Sally, a 2002 Porsche 911 Carrera who was an endless promoter of the quaint town of Radiator Springs. Now Porsche and Pixar are teaming back up to make a new, one-off, and special edition 911 celebrating the 20th anniversary of Sally's model year, which will be auctioned off through RM Sotheby's to benefit childrens' charities upon its completion in a few months' time.

Instead of using a 996-generation 911 like the original Sally, the new Sally Carrera will be based on the current 992 gen and designed from the ground up as a road car as opposed to a computer-animated cartoon character. For the project, Pixar is working closely with both Porsche's styling department as well as the Porsche Exclusive Manufaktur team to make sure this new Sally is an easily recognizable callback to the real car.

The processes of turning a 911 into Sally and then turning Sally into a modern roadgoing 911 are fascinating and in-depth. At this year's SXSW in Austin, Texas, I got to find out exactly how Pixar and Porsche did it.

Turning a 911 Into a Cartoon Character

Pixar Production Designer Bob Pauley and Creative Director Jay Ward discussed Sally's full history alongside Porsche representatives and both of them fessed up to owning little blue coupes like Sally. Ward said that the film series' star cars are often "cast" and developed into characters based on different models' well-known histories or deeply ingrained associations. The character of Sarge the Jeep was a perfect example. "People can watch it without the sound on and get who the character is," Ward explained.

So, Pauley and Ward envisioned Sally as a friendly blue 911—a car that could easily keep up with her love interest, Lightning McQueen.

"A 911 has the engine in the back, so there's no large radiator grille—no opening in the front. It's actually a very smooth, clean design," Ward explained.

Radiator grilles worked on other characters like the Mack or Mater trucks because they could be viewed like a big nose or a mustache—but the team liked that a 911's smooth front end would allow Sally room for more expression. Big expressions are key to the Cars world, as the entire decision to give them big windshield eyes was inspired by the classic 1952 Disney short, Susie the Little Blue Coupe, which featured a similar character design for its animated cars.

Initial drawings of Sally were of a 993-generation Porsche with round headlamps, so Pixar and Porsche's new Sally-inspired 992 build really isn't as off the mark as it might seem to melty-egg enthusiasts. Pixar ultimately wanted Sally to be a current car given that McQueen was a current-model-year race car, hence the 996.

Pixar needed Porsche's sign-off to use a 911 in the film, though, so it invited company representatives from Porsche out to Pixar four years ahead of the film's 2006 release to view an early screener.

According to Ward, one of the men from Porsche initially had some doubts about casting a 911 as a woman in the film based on the fact that some 85 percent of its customer base at the time was men.

"I said, 'I understand your concern, but if your customers are 85 percent male, it sounds like the place you need to grow is in female customers,'" Ward explained. "I don't know if that resonated with them, but they approved it, they loved it, and Sally became the very first licensed vehicle that we had approved to create for the movie."

Licensing is key to some of the "casting" decisions Pixar has made in the Cars franchise. When asked if there were ever any cars they couldn't fit into the film, Ward brought up their initial idea for a Radiator Springs mayor, Dutch Packard. Problem is, it's tough to figure out who owns the current-day rights to Packard, and without that, including a Packard-based character was a non-starter. The Doc Hudson character ended up taking over much of Dutch Packard's role eventually, which was far more feasible. Hudson the car company merged into AMC, which was later acquired by Chrysler, a company that Pixar could easily reach out to for approval.

From the approval stage, Pixar acquired a 911 Carrera for taking tons of reference photos to get the car right. Everything from chrome reflections to how the blinkers behave was vital to getting this 911 to look as realistic on-screen when rendered in CGI. Much like a real car, the Cars cars then got sculpted into models so the modelers on the animation team can better understand the shape of the characters.

Pixar's own rendering tech was improving greatly at the time, and Cars was particularly tough given that cars—as objects—are a bit like large mirrors, reflecting the scenery around them in their finish. One of the trickiest parts of designing Sally was the 996's complex headlights, which have a variety of textures and reflectors that made it tough to render.

While they were working on the film, the team also had the idea of making a life-size Sally Carrera in mind. That car was based on a real 1999 Carrera, but was shortened by seven inches and had the A-pillar modified to sit more upright to showcase Sally's eyes. The '99 bumper was discarded in favor of a digitally printed bumper with Sally's iconic mouth.

One particularly interesting thing about Sally's character design is her paint—a lighter metallic blue. Most of the licensed star cars in Cars reference real-life paint colors, but for Sally, the paint hue decision went the other way around. Most Porsche blues of the 996 era were darker ones that didn't fit Sally's bubbly personality, so Pixar's designers came up with their own "Sally blue." This special paint color went on the real-life car as well, along with the pinstriping on the character's lift-up spoiler.

Sally toured alongside a real-life Mater and Lightning McQueen for the Cars release and was later donated to the Porsche Museum in Stuttgart. Like many of Porsche's other cars, Sally really still is a running, driving vehicle, though not a roadworthy example. The blacked-out side windows make it a bit tough to see out of, but sure enough, the eye graphics are see-through and you can still see a full beige 996 interior inside, albeit with obvious cuts on the door card.

Reviving the Character Design Process for a New Sally

Perhaps the most interesting part of Porsche's new Sally tribute build is how the process of creating it lines up with the process of turning a 996 into a cartoon character. To go from a 911 road car to a lovable character, Pixar had to simplify the car design significantly. Sally is sleek and smooth, after all, and a lot of the complicated aerodynamic elements we celebrate for their performance chops would only take away from a character's friendly face.

"She's so simple and clear because she's got to act in the film," Pauley explained.

Ward and Pauley laid out a certain key, Sally-defining elements that the new 992 version needed to have. First off, there's the unique Sally Blue paint color—and lots of it. "By taking black elements and making them body color, it pushes them back and makes them part of the overall form," Ward explained.

The headlights, too, were simplified somewhat to feel more like a cartoon character. The team also opted for fewer variations in colors—as in, one shade of silver accents on the car. The hand-pinstriped "tattoo" under the wing stayed in the picture, though, as does a silver "Carrera" script in the 996-era's font and silver exhausts.

Sally's wheels were important, too, given that they're her arms and legs in the film. The 992 version will sport an update of the Y2K-era Turbo Twists that will be instantly recognizable.

The team also wanted the 992 Sally tribute to be a driver's spec—as in, a manual-transmission car with no sunroof. A slick roof on a Sally tribute isn't just for chassis rigidity, though. "Otherwise you're looking into her brain, right?" Pauley suggested.

Some creative extras were added back in, particularly when it came to badging. Sally Carrera doesn't have an interior. ("If she did, we wouldn't want to see it," Pauley noted.) So that's where the Sally tribute team got to have a bit more fun on the real-life tribute car's design. It's still a light and welcoming space, but there's also Sally-blue accents, a custom sill plate, and Sally art on the dash.

It's still a work in progress as all the Pixar team had to show at the event were some sketches of what the new 992 car will look like. Either way, that's a design room I'd love to be in on. The finalized car is set to be revealed in the coming months and will come with its own one-of-one matching Porsche Design watch. The 992 car won't have a giant smile across the front end like the original life-size one, but Porsche hopes it will put plenty of smiles on human faces.

Proceeds from the 992 Sally tribute car's auction will support Girls Inc.'s programs for girls and young women, as well as to USA for UNHCR to provide relief for children and families affected by war in Ukraine.

What other horrors are inside the Cars cars besides brains? What are they hiding in those cartoon interiors? Send the author a note: stef@thedrive.com

Porsche Now Has a Program to Engineer One-Off Dream Cars For You—Yes, You

Porsche is preparing to build you a dream machine from the ground up—not just a special paint and options package.