You’re going to want to steer clear of this slow-moving beast. 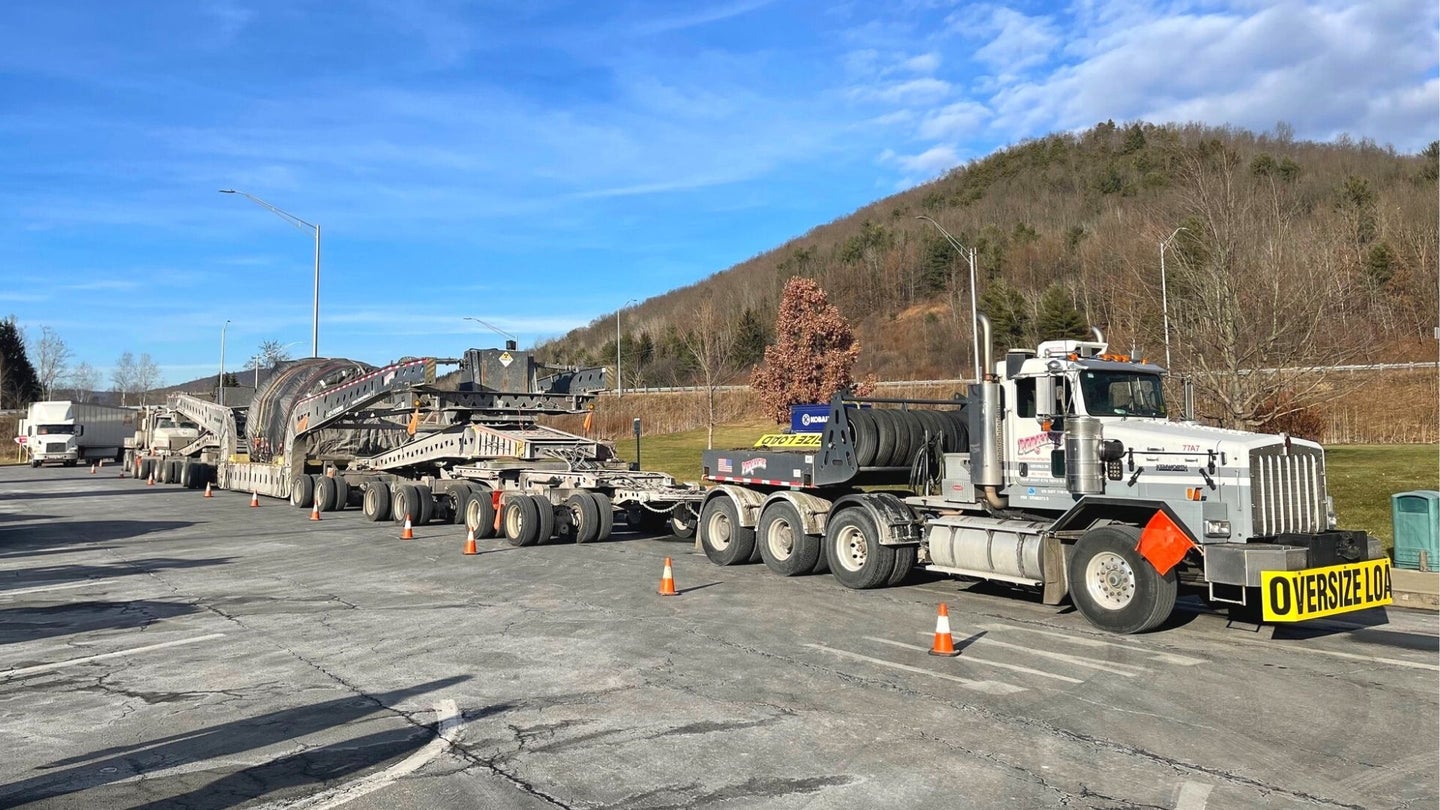 True story: when I was in college, I took a summer job through a temp agency driving the “Wide Load Ahead” pickup truck for a mobile home frame manufacturer. I’d help the semi driver chain up the cumbersome frames and lead the way as we rolled through the county roads of northern Indiana on the way to the delivery site. It was a great job, partly because we’d stop for cinnamon rolls or coffee or lunch after each load. Once, the driver let me drive the unloaded semi-trailer across the parking lot and it felt massive.

Compared to the 213-foot-long, 294-ton “superload” tractor-trailer making its way across Pennsylvania right now, that truck I drove briefly is like a Matchbox car. Traveling at snail’s-pace speeds of 30 miles per hour and lower, the superload truck is transporting a gigantic steel tank bound for disassembling and recycling on the other side of the state.

For scale, an adult blue whale weighs about 150 tons and can span between 70 and 110 feet long. So basically, the driver is towing the equivalent of two blue whales or seventy-three Hummer H1s.

The cargo itself is a chunk of the D1G Prototype reactor in West Milton, New York, where the U.S. Navy used the Kenneth A. Kesselring site for nuclear propulsion training until the mid '90s. Kicking off its journey on January 12, the massive truck and its trailer will travel a total of about 400 miles in 10 days and will mostly stick to Interstate 80, which stretches between San Francisco, California and Teaneck, New Jersey. It's a fairly hilly and mountainous route on the East side of Pennsylvania and whoever is driving this truck has to be a pro.

A local news site in Lehigh Valley posted a warning, and I couldn’t agree more: “A slow-moving ‘superload’ is making a 400-mile trip across Pa. Avoid it at all costs.” Here in Texas, it’s not uncommon to see one wind turbine blade strapped to a trailer on its way to assembly on someone’s property, and it’s much bigger than you might imagine. Thinking about getting behind a two-lane-wide superload in the middle of the night in the winter season gives me the cold chills.

Still, it would be interesting to see.

Automatic safety systems sure can jam on the brakes.

This Twin-Engine, Six-Wheel-Steer Truck Was Supposed to Replace Semis After WWII

Born in America’s postwar rush to reinvent, it was meant to be more economical and agile than semi-trailers. Things went about as you’d expect.