Two-lane roads don’t stand a chance against this big rig. 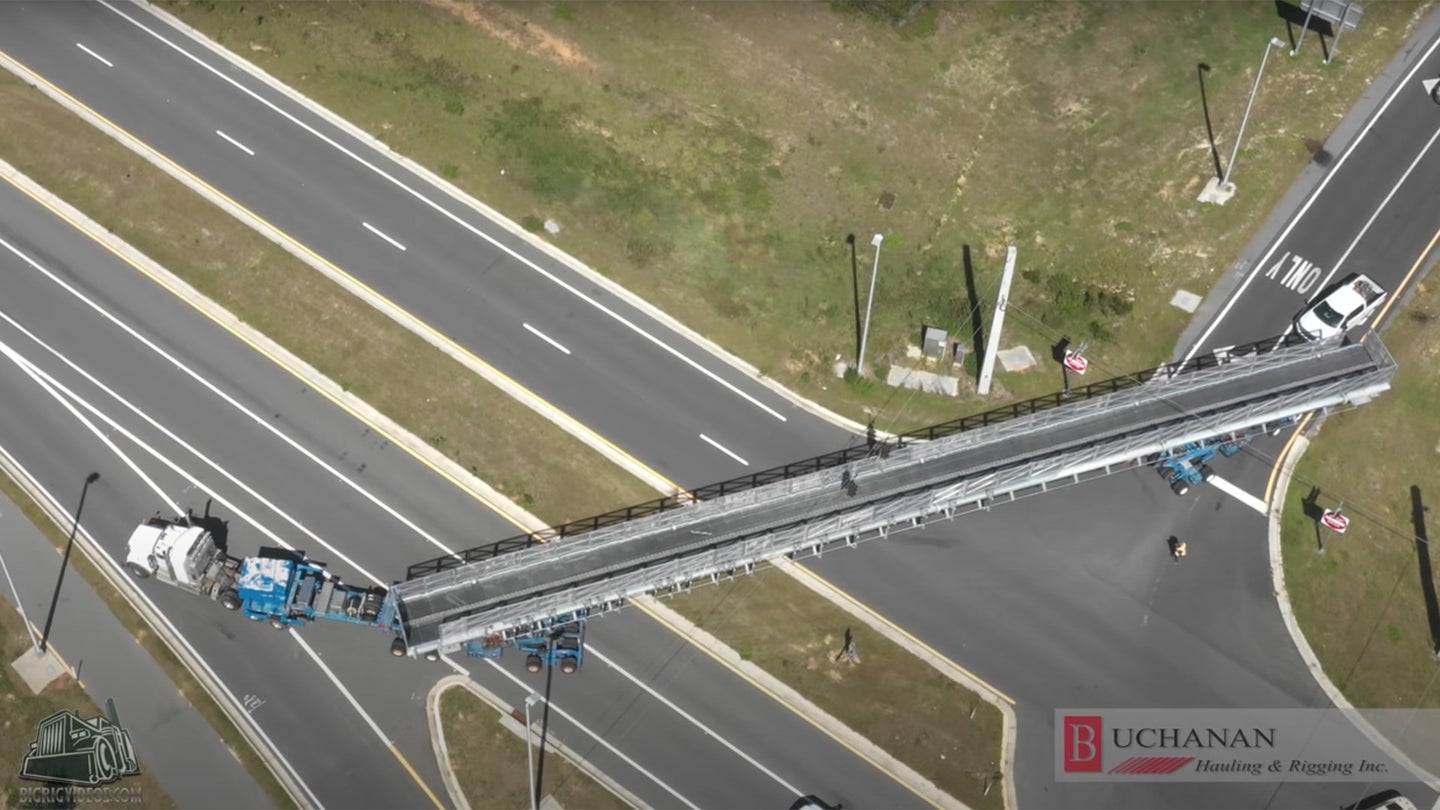 Driving a semi ain't easy, no matter what's behind the truck. From a load of logs to a reefer trailer full of food, each brings with it a set of struggles that are unavoidable when you weigh 30 times more than the cars passing by you. It gets especially tricky when hauling oversize loads that are even more cumbersome, whether it be for their width or their length. Some are both, though, like this 335,000-pound toll gantry "super load" that just so happens to measure 235 feet long.

The Buchanan Hauling & Rigging team managed to move this enormous structure from Central Florida to Port Saint Lucie on the state's eastern coast. As if the long distance wasn't challenging enough, the first leg of the trip took place on two-lane roads. That means swinging wide, driving in the ditch, and relying on your trusty crew of spotters.

It requires a special trailer setup to navigate such tight turns and, in this case, a particularly stout Kenworth. There are actually two separate trailers placed at opposite ends of the load, both of which articulate and allow the cargo to swivel. Still, it takes careful planning and a lot of slow-moving to maneuver through small towns and the like.

Florida Highway Patrol was kind enough to shut down traffic in both directions, allowing the Buchanan squad to make full use of the road...and the shoulder...and the grassy runoff. They traveled from there to the Florida Turnpike, where merging was a challenge in and of itself. It was smooth sailing for the next few miles, though, as the land-train-like convoy just had to keep things straight and steady.

It's amazing to see the scale provided by normal semis hauling flatbed trailers, which seem monstrous in most cases but puny when compared to the toll gantry.

Once the truck exited off the turnpike, it was time to drive through a series of intersections that are jam-packed with traffic rather than empty like earlier in the day. The company's Orlando Terminal Manager Tim Skistimas called this "tight, but very doable." You've probably seen a similar situation and wished they'd speed things up, but when you're hauling something that weighs more than a house, you can't really rush through.

Alas, the truck and the toll gantry made their way to the drop site where a crane would soon show up to erect the overhead metal framework.

In reality, deliveries like this happen across the country, and probably more often than you'd think. Some are even heavier, weighing nearly one million pounds in the most extreme cases. No matter what, though, it's always an event when one comes through town. After seeing this clip, how could it not be?

The Aftermath of This Semi-Truck Blowout Looks Expensive

And the video will make you flinch.