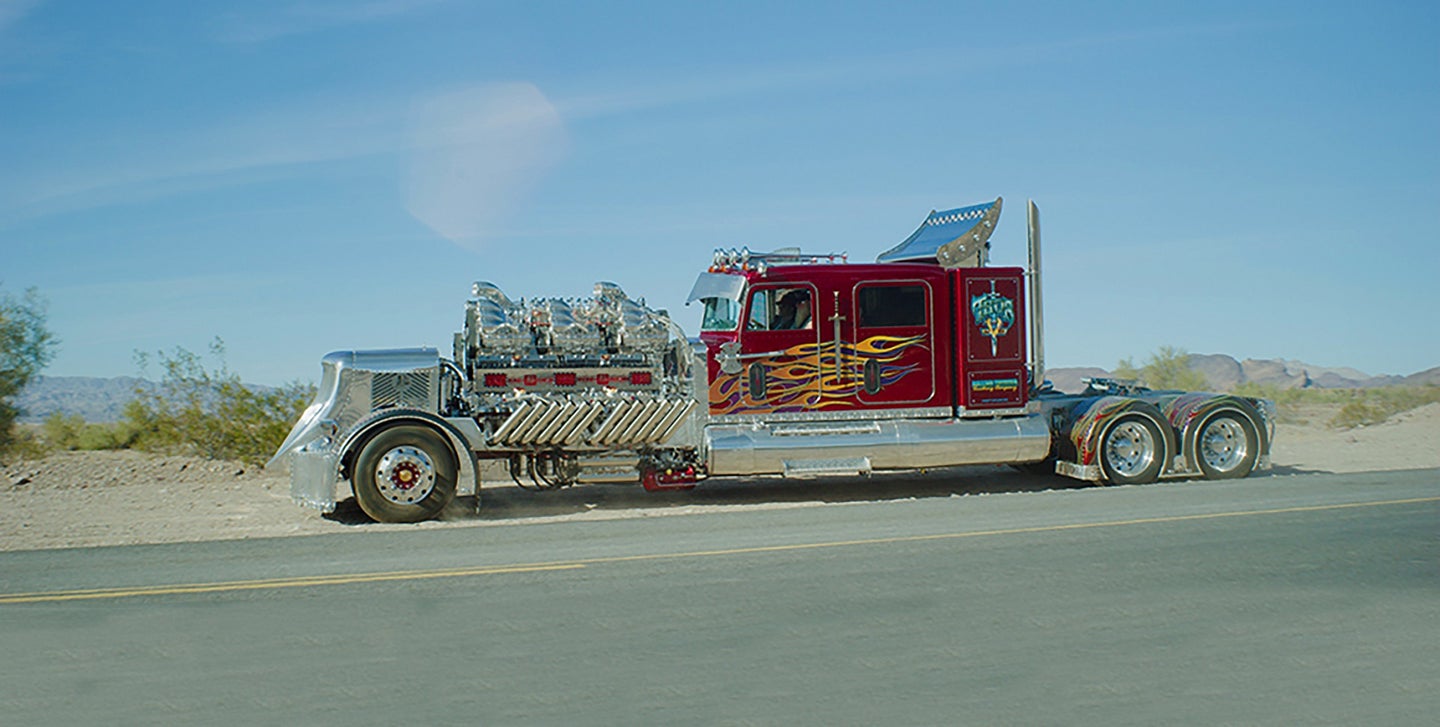 A larger-than-life semi truck called Thor24 sold for an equally gargantuan $12 million at a specialty auction held this past weekend. The chromed-out rig is the creation of renowned SoCal land developer Mike Harrah and his partners Tim Spinks and Paul Abram, who shed blood, sweat, and tears (and spent $7 million of their own money) building the wildest big rig anyone's ever seen.

Thor24 is powered by twin V12 Detroit Diesel semi-truck engines with 12 superchargers that produce a mind-bending 3,424-horsepower and probably enough torque to rotate this little place known as planet Earth. It's as ridiculous as it looks and sounds, and it was even recently featured in Hot Rod Magazine.

Nicknamed the “Holy Mother of Metal,” the heavy-hitting Pete was conceptualized as the most outlandish semi-truck ever built. And with its spec sheet, in addition to its wild looks, that goal seems to have been achieved.

It’s 44 feet long, weighs 32,000 pounds, and is based on a 1979 Peterbilt 359 Crew Cab. Nearly every modification had to be custom made, including the two-stroke V-24 engine. The power plant is essentially a pair of Detroit Diesel 12V-71 V12s mated together nose-to-nose with a custom-fabricated splined shaft, resulting in a total displacement of 1,704 cubic inches, or 27.92 liters.

Normally, the 12V-71 comes with two Roots-type superchargers—one for each bank. But Thor24 comes with eight BDS 8-71 superchargers on top of the stock units that sit in the engine valley. The additional blowers are all driven by another custom-fabricated shaft measuring 103 inches long and weighing just over 263 pounds. In fact, the whole induction system is so massive that Harrah and his crew even had to custom-make a wooden buck to help them design and assemble the entire arrangement. Eight nitrous bottles have also been installed, for good measure.

The result is 3,424 hp at 2,500 rpm, which goes through an Allison HT740 transmission with a locker-type differential at the rear axle. While engineering Thor24, Harrah had to rework the suspension since the stock setup from the original Peterbilt truck didn’t work. As a fix, he swapped it with an A-arm type front suspension from a VanHool coach bus.

Its construction isn’t the only crazy bit as the Peterbilt crew cab is also decked out with a custom interior, featuring a 1,500-watt per channel audio system and seven movie screens with a 40-inch master monitor. It’s all powered by its own Hawker turbine-style auxiliary power unit—the same type of generator that sits in the tail of passenger jets.

When all was said and done, the project supposedly cost a total of $7 million. Considering it just sold for $12 million, we're going to go out on a limb and say that it was a pretty decent investment.

The bipartisan effort claims that doing so would save approximately 1,115 lives each year.

The Aussie-built Pete is powered by a quad-turbocharged, 28.0-liter Cummins diesel and was created specifically for burning rubber.