Another Mach-E owner has posted their timeslips and it’s spurred quite the conversation. 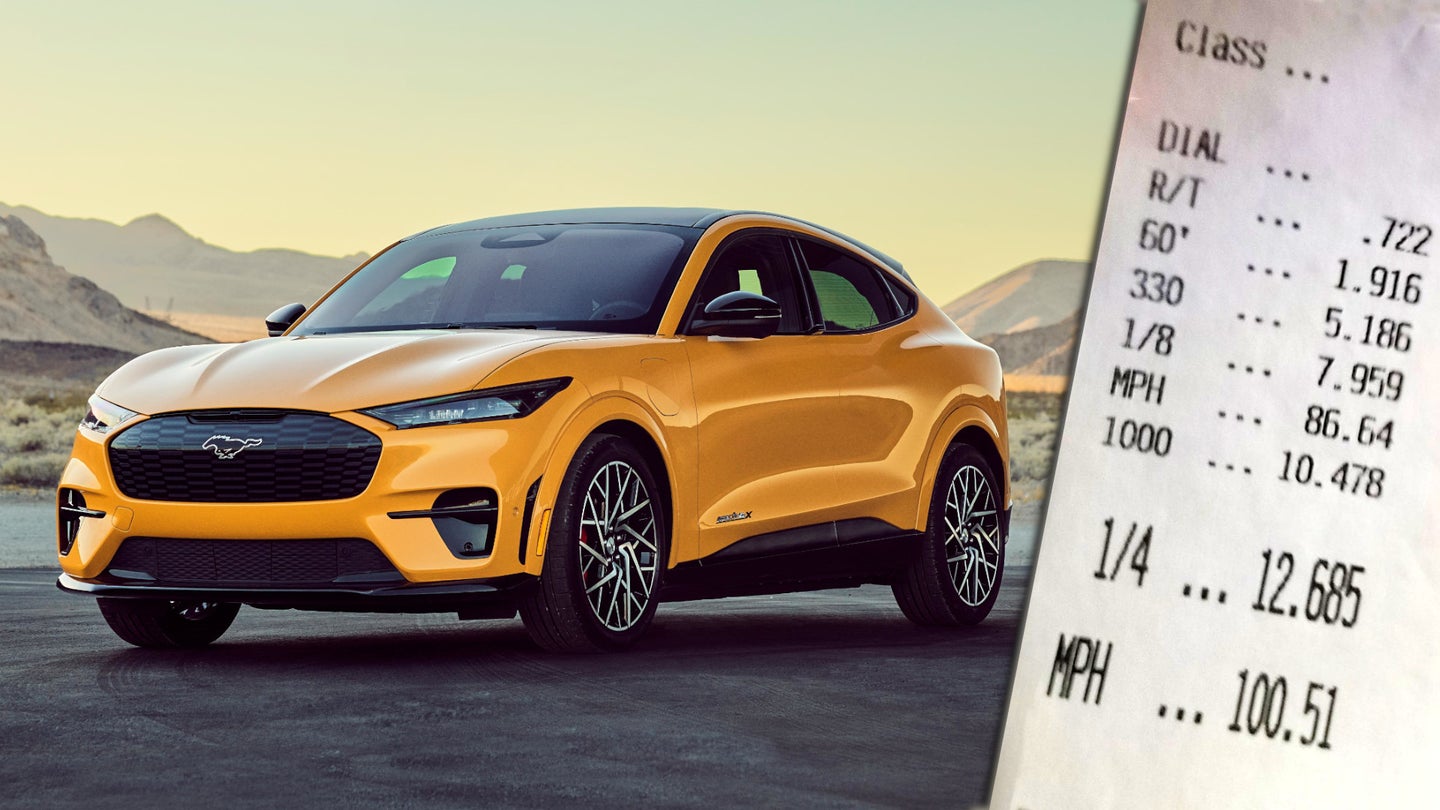 The Ford Mustang Mach-E was controversial on launch for borrowing a legendary performance nameplate for a electric SUV. By and large, everyone got sick of having that argument, and now there's a new debate afoot. It's all about the Mustang Mach-E GT's performance in the quarter-mile, or more specifically, its curiously low trap speeds. Kick off by a post from a man named Tommy to MachEForums.com, the debate has since spread to the pages of Reddit.

The latest consternation comes from a timeslip from a base Mustang Mach-E GT. Running at a 72% state of charge and rated at 480 horsepower, the vehicle laid down a 12.685 quarter-mile time while trapping only 100 mph. The owner also noted a significant reduction in perceived acceleration beyond the 80mph mark. Notably, the times are only a hair slower than those achieved by the owner of GT Performance Edition, which we covered in August—the uprated model achieving a 12.657 second quarter-mile while again only trapping 100mph.

The thing that has the community all riled up is that the trap speeds recorded are a good 5-10 mph slower than would be expected for a mid-12s quarter-mile. Further complicating the issue, tests by Car and Driver had the lower-tier Mustang Mach-E Premium AWD model, with just 346 hp, deliver a 13.8 second quarter-mile at a faster trap speed of 101 mph. It's left owners scratching their heads as to the real issue at play.

One key point mentioned by many is the fundamental way in which electric motors work. As electric motors turn, they create a "back-EMF" voltage across their coils, which increases with rotational speed. The faster the motor turns, the more the back-EMF goes up, until it is equal with the driving voltage being applied to the motor. Electric motors can deliver full torque from zero RPM, up to this limit.

Beyond this point, if the motor is to turn any faster, the driving hardware has to get creative. We can't easily go higher than the battery's peak voltage, so instead the back-EMF needs to be reduced. This is done by a method called "field weakening" or "flux weakening," where currents are applied to coils in the motor to oppose the magnetic field of the motor's own magnets. This reduces the total magnetic field, thus reducing the back-EMF, and allowing the motor to turn faster. However, in this mode of operation, while power remains constant, the torque quickly drops off due to the weakened magnetic field.

Thus, for a single-speed electric vehicle using permanent-magnet motors with field weakening, a drop-off in acceleration is expected as the power available flattens out while aerodynamic drag increases. The issue with the Mustang Mach-E GT models, however, seems to be that this drop-off is happening sooner than owners would otherwise appreciate. Comparisons, whether fair or not, have regularly been made with the Tesla Model Y Performance. With slightly less power but also less weight, the Tesla rival has delivered 11.91 second quarter miles with a trap speed of 116 mph as reported by AutoEvolution.

This has left some owners of the Mach-E frustrated, questioning why their more powerful vehicle isn't closer to the Tesla in a quarter-mile despite similar 0-60 times in the 3-second range. However, a look at their relative top speeds may shed some light on the matter: the Mach-E GT tops out at 130 mph, while the Model Y Performance quotes 155 mph in comparison.

It suggests Ford may have tuned the Mach-E GT models for great off-the-line starts and 0-60 times, while making a trade-off in top-end performance. It also bears noting that times posted on forums have often been recorded by owners in the Unbridled Extend drive mode, which aims to maintain consistent performance lap-to-lap on a track rather than giving everything for one big pass down the drag strip.

Thus, there may still be some speed in hand for the Mach-E. It could be that in current form, the Mach-E holds back some power from the battery or motor controllers at the top-end, which could be unlocked in a future software update. Similarly, Ford could drop a "Drag Mode" optimized for quarter-mile performance. It could even be a simple fact that the handful of timeslips posted online so far aren't representative, and there's a Mach-E ready to drop an 11.9 second quarter-mile given the right day, a fully-charged battery, and the right drive settings.

The fact that the lower-end Premium AWD models are able to trap higher speeds than the Mach-E GTs hint that there may be more performance left on the table. The Drive has contacted Ford regarding this debate and will update in due course.

Regardless, it's likely that the vast majority of Mach-Es will never see a drag strip and owners will carry on perfectly pleased with their purchases. However, for those keen to lay down rubber at the strip in their GT models, a little more hustle would clearly be more than welcome. Whether Ford can bring that to the table remains to be seen.