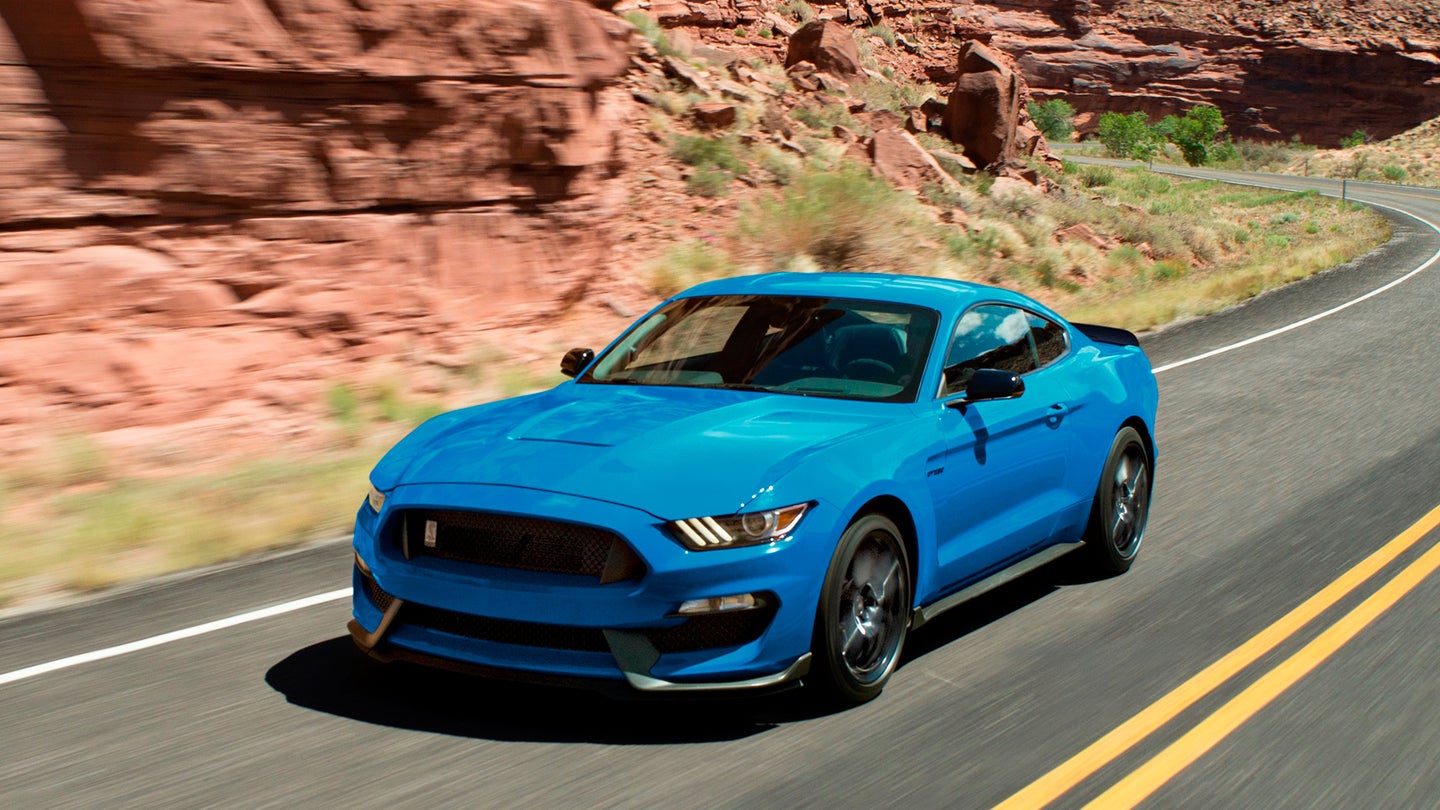 While Dodge and Chevrolet continue to push the boundaries of usable power with the Challenger and Camaro, Ford continues to stand firm—for the time being—in maintaining the Mustang's high-performance model as a well-balanced track machine. Where its crosstown competitors trade in supercharged motors packing horsepower figures in the 600-700-800 range, the sportiest sixth-gen 'Stang makes do with just 526 ponies...albeit generated by a flat-plane crank screamer of a V8 that seems more suited to one of Maranello's Italian stallions than a Mustang.

And that trend will continue through the next year, at least. The Shelby GT350 will stick around the Mustang lineup for at least one more year, Ford announced Monday in a press release.

Indeed, the Shelby GT350 rolls into the new model year all but unchanged. The only alterations the Blue Oval made to the naturally-aspirated muscle car are a trio of new paint colors: Kona Blue, Orange Fury, and Lead Foot Gray. (The carmaker doesn't mention whether the addition of these new hues to the palette come at the expense of three existing colors, like what happened last year when Ford threw out Deep Impact Blue and Competition Orange for Lightning Blue, Grabber Blue, and Ruby Red Metallic.)

Otherwise, it's same as ever: the choice between the wild GT350 and the even wilder GT350R, both loaded up for road course duty with extra cooling and bulletproofing in the powertrain, massive brakes, and the magnetic ride suspension technology that's served Cadillac and Ferrari so well for years now.

And while Ford doesn't come out and say as much, we're hoping this news about the GT350 enduring unchanged bodes well for our hopes that Dearborn will drop a new 700-plus horsepower Shelby GT500 sometime this year. Presumably, the Ford Performance engineers have been so busy working on that new supercharged monster, they haven't had time to do much to the existing Shelby in the lineup.

Besides, on top of increasing aggressive competition in the supercharged, super-powerful muscle car market, 2017 marks the 50th anniversary of the original GT500. It's hard to imagine Ford missing out on a chance to cash in on an anniversary that golden.