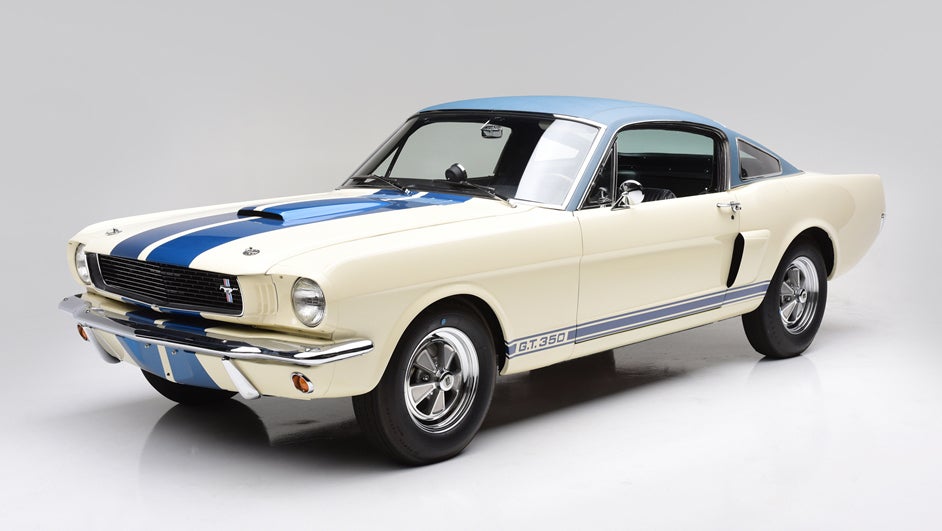 Among the American icons that will be up for sale at the Barrett-Jackson Scottsdale auction in January is the first pre-production 1966 Shelby GT350 Ford Mustang prototype bearing chassis #SFM6S001. It has documentation from the Shelby American Automobile Club certifying that this was, indeed, the first prototype of the ‘66 Shelby GT350. It’s powered by a numbers-matching 289 ci V8 engine with a four-speed T10 manual transmission.

There are a few unique aspects of this prototype that set it apart from production Shelby GT350 Mustangs. The most noticeable difference is the medium blue vinyl roof which was considered for production models. Presumably, Shelby decided against it because, like most vinyl roofs, it just looks weird. What might be the weirdest part is the fact that the color of the roof doesn’t quite match the blue stripes on this Wimbledon White Mustang.

Another feature on this car not found on any other Shelby GT350 is what's called Pony upholstery. It was an upscale option on regular Mustangs that features embossed horses on the seatbacks which unfortunately is not visible in the pictures Barrett-Jackson has in the listing. That might make this the most luxurious 1966 Shelby GT350 ever built.

This prototype started life as a test car before becoming a show car for Shelby. It was sold to its first private owner in 1968 until it was sold again in 1971 to the owner who had it for most of its existence. From 1971 to 2004, the car lived in Oakland, California, where it spent a lot of time in storage. It was restored to as-new condition in 2011 and has won awards at the Mid-America Ford show and Shelby Nationals. It was also on display at the 2015 Pebble Beach Concours d’Elegance.

While the Shelby GT350 was a car that was made to be driven, it makes sense for this one to stay well-preserved rather than thrashing a racetrack due to its historical significance. It’s hard to put a value on this car, but we’ll find out when it hits the auction block in January.

That’s a lot of scratch for purposefully less-than-perfect.