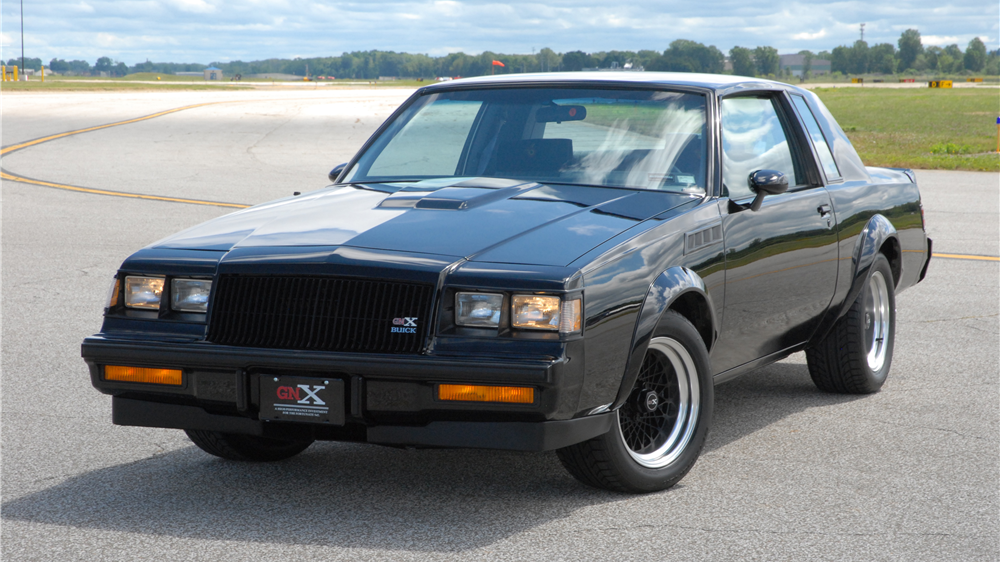 The 1987 Buick GNX “Grand National Experimental” was the swan song for the rear-wheel-drive G-body Buick Regal of the 1980s. It was a high-performance variant of the Grand National, itself a high-performance variant of the Regal. Made in partnership with McLaren Performance Technologies and American Specialty Cars, the GNX is legendary for being an unassuming Buick coupe with supercar-beating abilities thanks to its turbocharged 3.6-liter V6 engine and performance-tuned four-speed automatic transmission. It ran the quarter mile in 12.7 seconds at 113.1 mph and had a 0-60 mph time of 4.6 seconds. Both of those times beat the Ferrari F40 and the Porsche 930.

Available only in black, the GNX also had some subtle aesthetic upgrades that set it apart from the Grand National. It had “GNX” emblems on the grill and on the trunk lid, but no emblems on the hood or fender like you'd see on a Grand National. The GNX also had vents on the front fenders and special 16-inch black mesh style wheels. To the untrained eye, however, a GNX is just another Buick Regal which is part of what makes it so cool. It was the ultimate sleeper of its time.

With values of the GNX starting to go through the roof, and for good reasons, the first Buick GNX ever sold to the public is going to auction via Barrett-Jackson in Scottsdale in January. It’s the first one ever sold, but the third one ever built. GNX #001 and #002 are both owned by GM and sitting in museums. These first two cars were never in private hands.

GNX #003, however, started life as a press car and has changed hands a couple times before being sold to the current owner in 1989. This GNX was put in storage in 1992 and stayed there for over 20 years. The car has recently undergone a mechanical and cosmetic restoration returning it to its former glory.

The result is a like-new condition 1987 Buick GNX with just 10,790 actual miles on it. Any GNX in this good of condition would be desirable, but the fact that this was the first one ever sold makes it a small piece of GM history. There is no reserve on the car and Barrett-Jackson isn’t making an estimate on how much it will sell for, but there’s a good chance this will be one of the most expensive Buicks ever sold. In 2015, an ultra clean Buick GNX with 362 actual miles sold at auction for $165,000 and we’d be surprised if GNX #003 sold for less than that.

It ain’t cheap, but can you put a price on perfection?