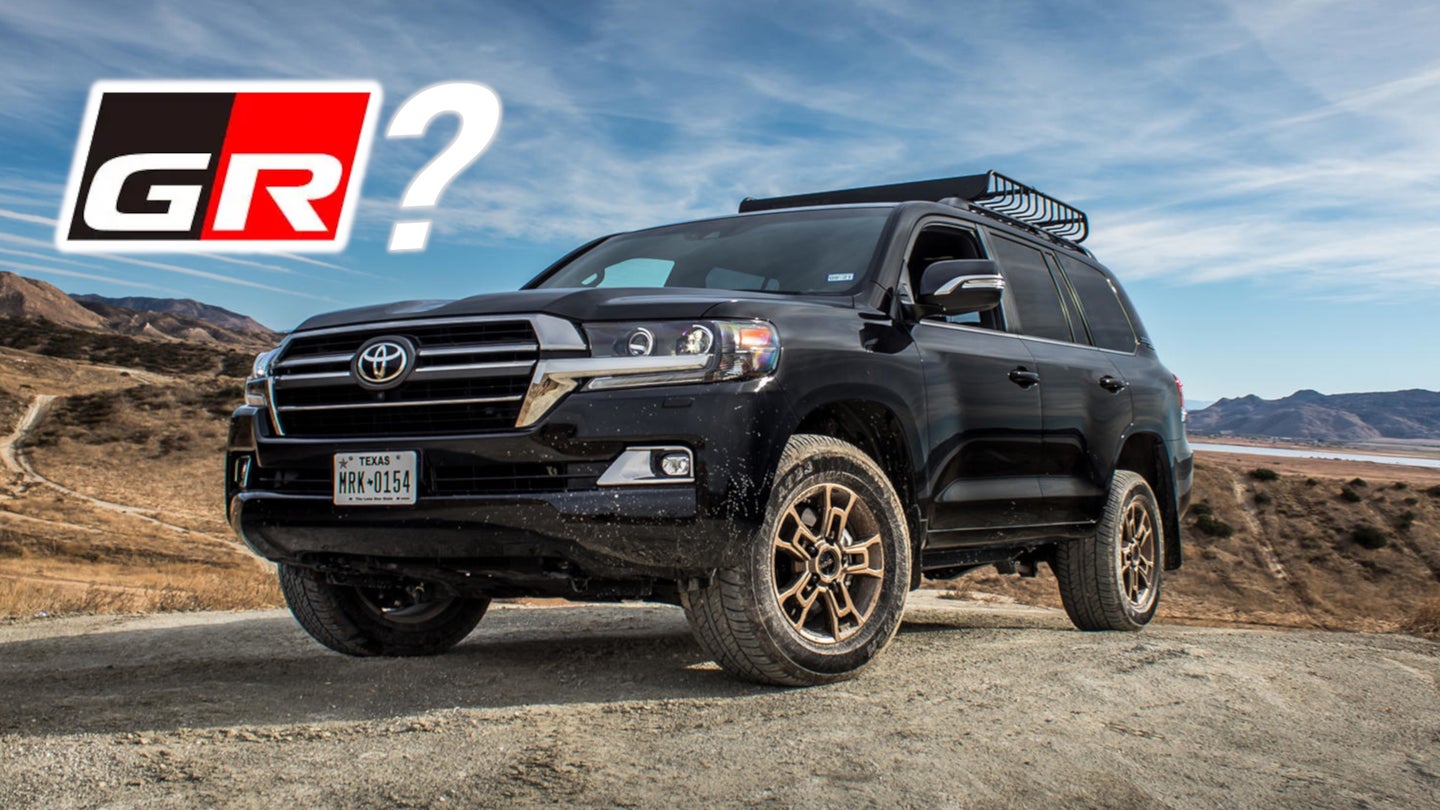 The Land Cruiser is a legendary nameplate worn by Toyota’s off-roading finest. Known for decades of faithful service and bulletproof resale values, the truck is up for renewal with a next-generation version preparing to take over for the venerable J200, which first went into production all the way back in 2007. With the changing of the guard next year will come new powertrains, updated trim levels, and if this new report of a leaked dealer bulletin is to be believed, a tantalizing treat: a Gazoo Racing Land Cruiser set up to dominate off-road.

The news comes via CarBuzz, sourced from a leaked dealer bulletin posted to a Japanese forum regarding the new model lineup. The new Land Cruiser, named the 300 Series, is reported to eschew V8 engines entirely, with base models featuring a 3.5 liter twin-turbo V6 under the hood, putting out approximately 420 horsepower and 434 lb-ft of torque - the same engine as the existing Lexus LS500. There’s also a diesel option, a 3.3-liter turbo V6, which puts out 309 hp and a healthy 507 lb-ft of torque.

The Gazoo Racing model appears to focus more on its off-road credentials than adding grunt, with the GR-S trim level available with either the standard diesel or gasoline engine with no extra power. Interestingly, the diesel model is only available as a five-seater to the gasoline model’s seven. Does Toyota see the overlanding build-out potential with that powertrain? Another possibility is that a larger differential (all that torque!) or fuel tank would cut into the space needed for the folding third row—sources on that same forum post indicate the third row in the new Land Cruiser will fold into the floor, rather than upwards and to the sides like in the current 200 Series.

The key features are the front and rear locking differentials, which make a world of difference in tricky off-road situations. Also included solely on the GR-S is Toyota’s Kinetic Dynamic Suspension System, which allows for automatic adjustment and deactivation of the truck's sway bars. This allows the vehicle to minimize body roll on road without sacrificing articulation when off road. The trim level also ships with a smaller 18-inch wheel option versus the 20-inch wheels on the top luxury trim, which makes sense—higher profile tires are better at soaking up the bumps, after all.

While the suspension and differential upgrades are welcome gear for a sportier off-roader, the GR-S appears to be more of a capable trail machine rather than a hyper-powerful weapon like the Ford Raptor. With the current Land Cruiser model discontinued in the US for 2021, it remains to be seen whether Toyota will bring the new one to the States in future, Gazoo Racing version or not. But we'd say it's just a hair more likely than the GR Yaris making it to America.