The Man Who Talks to Land Cruisers

Not just a parts guy, Onur Azeri is a Toyota wizard with a philosophical bent. 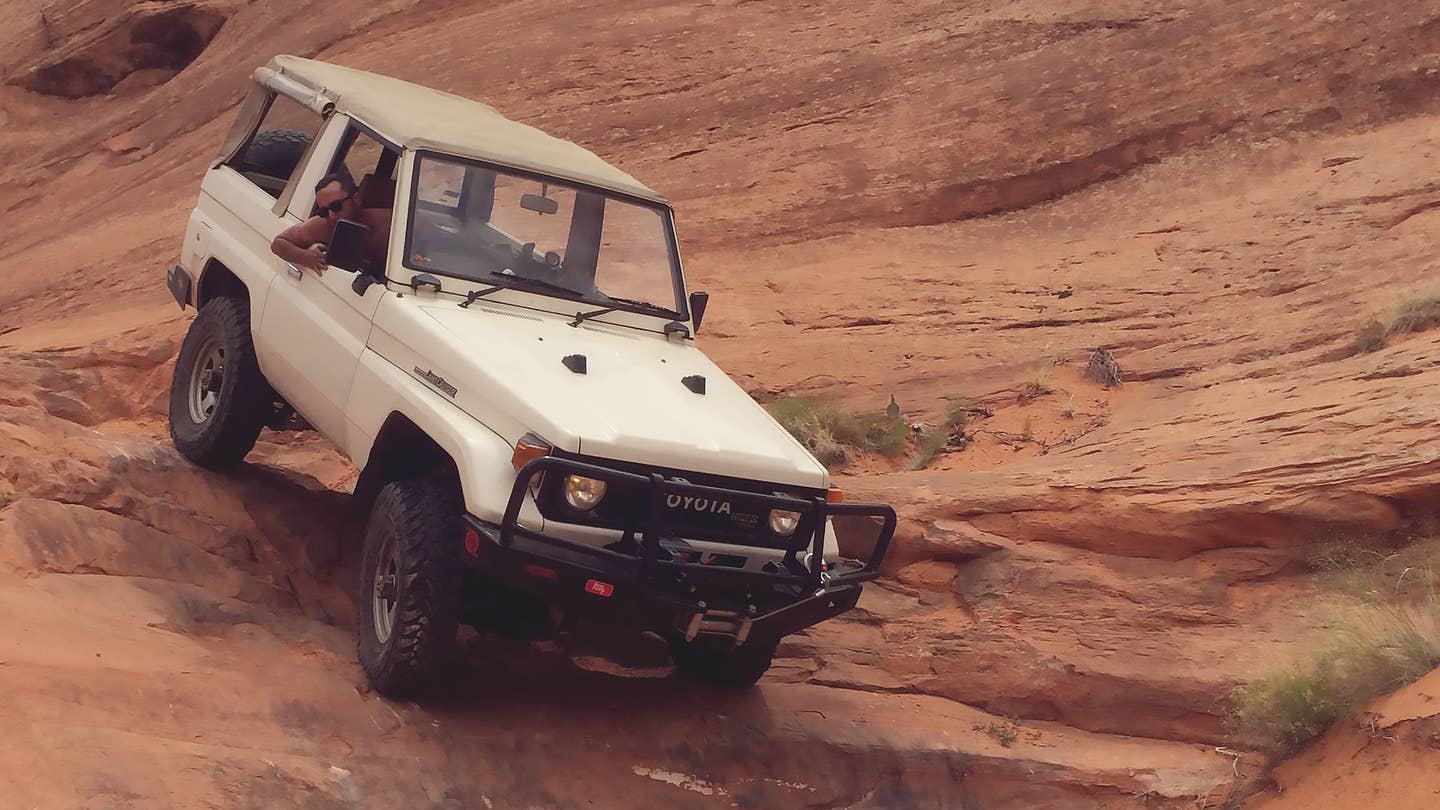 Onur Azeri is known among many Land Cruiser aficionados as the go-to guy for old Land Cruiser parts. There are dealerships and there are aftermarket parts companies, but no one, I'm told, knows parts the way Azeri does.

"He's the dude," Jon Held, a member of the Gotham City Land Cruiser club, said while supervising the offroad test of our project '88 Land Cruiser. The others in the group nodded.

His reputation as someone with a deep understanding of Land Cruiser parts and how they relate to one another is why we worked with Azeri in our own build. It was difficult to find a lot of the little hard parts we needed through ordinary channels. For example, if you're in search of a 6mm tapered shim and no one else knows what you're talking about, Azeri will know. If you need the crossmember from a truck of a different vintage, not only will he know how to source one, he just might pull one off of a truck sitting in his driveway and mail it to you (he did that for us).

Part of Azeri's deep knowledge comes from the fact that he himself is a Land Cruiser nut. He owns and wrenches on his own trucks. But there's more to it than that. Azeri is a Land Cruiser philosopher of sorts. He turned up at Brooklyn Motor Works—the shop in which we built our Land Cruiser—over the summer, when we were still mid-project. He had driven up I-95 from Atlanta in a right-hand drive '85 BJ70, a tiny Japanese market Jeeplet powered by a torquey, slow-going 4-cylinder diesel motor. Summer weather had done its work and Azeri looked hot.

"I don't mind," he chirped. "I just keep cold drinks in a cooler behind my seat and I can drive this thing 55 mph all day."

Interstate driving, he said, wasn't the point. This truck was meant for the slow crawl over logs and boulders.

You may not know "parts guys" personally, but most of the ones I've met were of the modern, "get your parts and get out" variety, their sole mission being to get rid of the customer as quickly as possible so that they could move on to and get rid of the next one. Azeri said he looked to the parts guys of yesteryear for his inspiration, striving to be someone who could look at a part and know not only what it did, but also its context within the greater mechanical organism.

But I'm getting ahead of myself. I'd be remiss in not telling you that Azeri was a PhD candidate at Kent State University before he became a Toyota guru. He was studying, as he puts it, "social scientific research methodologies in application with ancient Greek philosophy and rhetoric, sociology of knowledge and technology, and forms of representation." Whatever that is. Sounds like a good place to start when diving into trying to understand something as complicated as a motor vehicle with more than 5,000 interrelated parts.

While he was writing his dissertation, his academic adviser died suddenly of brain cancer, leaving Azeri in an odd lurch. That was in 2004, and he found himself unsure of his direction.

"To lessen the psychological burden, I was teaching university classes as an adjunct while writing my dissertation in a small, dusty office on the sixth floor of the university library," he said. "At a certain point, the academic worldview became hollow and devoid of meaning."

Meanwhile, he was also spending time in machine, fabrication and auto repair shops in and around Cleveland, Ohio, dabbling in wrench turning. He'd already been working on his own Land Cruiser for a few years and said the hours, days and weeks spent busting his knuckles on old trucks began to take on new meaning. Conversations he'd had with his future mentor, Dan "Cruiserdan" Busey had him thinking about striking out along a different path.

Then one night – Valentine's Day – a plow truck cut him off when he was driving along I-77. Azeri swerved to avoid hitting it and his Land Cruiser rolled onto its side near the edge of the highway. Cold and alone, he waited for a tow truck to rescue him and his busted truck. In the aftermath of the wreck, he decided—along with wanting to rebuild his Land Cruiser—that it was time to make a major change in his life.

"I called up Cruiserdan and asked him if he was still serious about a conversation we had years earlier about my becoming a parts professional," Azeri recalled. "He was indeed."

So Azeri shed himself of most of his belongings, donated his academic books to the Oberlin College library and moved to Albuquerque, where he worked under the tutelage of Cruiserdan at American Toyota.

"I began the methodical process of learning how to be a real parts guy; a parts guy who knows not only how to understand the Toyota parts logical system but also how to correlate that with the 'real world' of Toyota Land Cruisers," he said. "All the while, I learned the necessary vocabulary, skill-set and background knowledge to develop both a theoretical expertise and a lived expertise—building stuff, breaking stuff, fabricating stuff, and exploring the great American West in my various Land Cruisers."

As Azeri's understanding of his new discipline grew, other opportunities presented themselves. He was promoted to assistant parts manager at the dealership, then he moved to Salt Lake City to run a Land Cruiser shop. Eventually, family drew him to Atlanta, Ga., where he's based. Out of all of it—the numerical intricacies of Toyota's parts system, the reality of maintaining a machine that could withstand off-road punishment and the stunning natural scenery in which he was enveloped—Azeri developed a philosophy.

"Anyone can look up at Toyota part number and buy the damn thing, but very few people know a ten or twelve digit Toyota part number and know the entire worldview of that number in its various manifestations—what the first five digits mean, what the suffix digits mean, which Toyota Group keiretsu company manufactures the part, where the part is made, how many different variations of the part there are in its lineage, and so on," he explained. "After all, Land Cruisers are basically all-purpose appliances in the best sense of the word—they either work or they don’t in their intended functions. Thus, using the Toyota part numbering system becomes more akin to the later, mature Wittgenstein of the Philosophical Investigations, where the goal is not to create a structure or rules or policy, but to apply and build, to understand the object or the situation in front of you in a more engaged and lived manner."

Interesting things happen when a philosophy student becomes a parts professional. Not many tend to think of parts and machines that way, but Azeri's unique outlook made him a sort of medicine man among Land Cruiser aficionados.

"Owning a Land Cruiser is like being a member of a tribal organization with rituals, frameworks for action and understanding, and a shared, collective memory of the past," he said.

Deepening his understanding of what he already learned meant traveling to Japan in 2010, to the Toyota factories where Land Cruisers are built. There, Azeri watched the care that went into the manufacturing process as each truck came together on the assembly line.

"After the new Cruiser roars to life, it's sent off to a brightly-lit area where white-gloved women start feeling, caressing, inimitably probing the work of everyone before them," he said. "When we asked the Yoshiwara Plant manager at a post-tour briefing about why only women did the final body quality check on the Land Cruisers, he said that only women seemed to have the touch—kanjiru—necessary to truly understand whether the truck was ready for the end-user. That made a lasting impression on me."

What this all really boils down to, though, is utility. Land Cruiser folks love their trucks, and there's a reason for it.

"How does one traverse the most difficult terrain all over the world in the most reliable and functional manner? Well, you drive a Toyota Land Cruiser," Azeri said, adding that everyone from child-toting suburbanites to Colombian narcos to Médecins Sans Frontières doctors use the trucks to get where they're going. "The Land Cruiser’s ubiquity in all terrains, circumstances, and cultures is the defining reason to always answer the question 'Why Land Cruisers?' with 'Why not?' And because they are damn cool, to be honest with you."