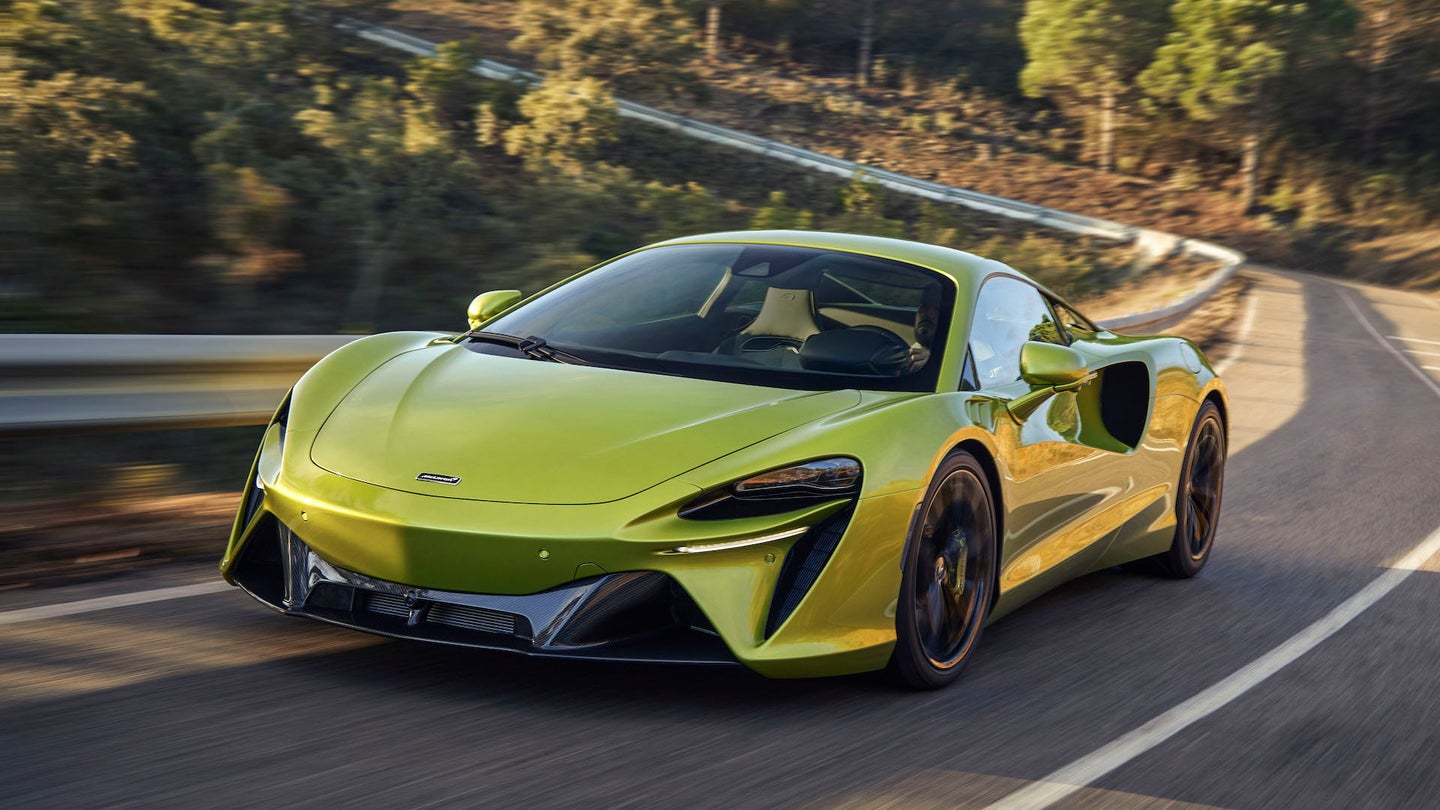 When McLaren, Ferrari, and Porsche all trotted out hybrid-powered hypercars as halo models in the first half of the 2010s, we all sort of knew that electrification would eventually become more common, if not the norm, in the supercar game. Then the Acura NSX came along, as did the McLaren Speedtail and Ferrari SF90. Now, here's the latest entry in the hybrid supercar canon: the $225,000, plug-in hybrid McLaren Artura.

On top of being the first McLaren hybrid one can buy that isn't a P1 or a Speedtail, the new Artura is also notable for having a V6 instead of a V8 like every other McLaren road car in recent memory. Specifically, it's a twin-turbo, 3.0-liter V6 combining forces with a new axial flux electric motor to deliver a total of 671 hp and 531 pound-feet. Zero to 62 miles per hour is dealt with in three seconds flat, 124 mph is reached in 8.3 seconds, 186 is hit in 21.5, and the Artura will complete the quarter-mile in 10.7 seconds. Top speed is listed as 205 mph.

Apparently the first axial flux-type motor to make its way to a "series-production" road car (most others use radial flux motors instead), the rear-wheel-drive Artura's e-motor is mounted inside the transmission bell housing and boasts a power density per kilo 33 percent higher than that of the P1's electric system. Good for 94 hp and 166 pound-feet on its own, McLaren says this electric motor blesses the Artura with the "sharpest-ever throttle response" in any McLaren supercar. Of course, the battery power here is good for more typical hybrid electric benefits like making this the most fuel-efficient McLaren yet. It also has the ability to travel 19 miles (at speeds of up to 81 mph) on volts alone. The 7.4-kWh onboard battery can be plugged in and charged to 80 percent in 2.5 hours.

That said, it doesn't sound like the gas-powered part of the equation has been neglected. The Artura's six-cylinder internal combustion engine has its turbos nestled inside of the V, revs to 8,500 rpm, and uses cylinder heads and blocks with 3D-printed cores for more intricate cooling. Unassisted, it produces 577 hp and 431 pound-feet, more hp per liter than any other Macca bar the Elva and Senna.

An all-new eight-speed, twin-clutch automatic transmission was developed specifically for the Artura while McLaren's first electronic differential independently shuffles torque from one end of the car's rear axle to the other. Fun gearbox fact: when put in reverse, the Artura relies solely on its electric motors to simply turn in the opposite direction, meaning the eight-speed has no reverse gear at all.

In addition to all the hybrid stuff, the McLaren Artura is also notable for being the first car to feature the company's new McLaren Carbon Lightweight Architecture, or MCLA for short. The new featherweight frame was developed with hybridity in mind and is built in-house. Overall, the 3,303-pound Artura pumps out 481 hp per metric ton, a power-to-weight ratio that McLaren claims is best-in-class. For the record, the Artura's hybrid-electric components account for 287 pounds of the mid-engined supercar's curb weight.

While electrified power and low weight are key to the Artura recipe, McLaren hasn't rested on its laurels when it comes to the rest of the running gear. Hydraulic steering, a McLaren staple, remains in redesigned form here to be lighter (in system weight, not feel) while Pirelli P Zero Corsa tires have been enhanced to deliver grip comparable to the P Zero Trofeo R compound found on the 600LT. The improved tires, old-school steering, and aforementioned e-differential pair with a new rear suspension system, rear spoiler, and diffuser to apparently make the Artura both more agile and stable. Carbon-ceramic brakes with aluminum calipers (six-piston monobloc fronts, four-piston rears) as well as the Artura's front suspension system are also similar to those found on the 600LT.

Featuring a design "shrink-wrapped" around typical McLaren supercar proportions, the Artura's body is made of "superformed" aluminum and carbon fiber. McLaren attempted to minimize the number of panel gaps on display and, hence, the car's entire rear clamshell is made of one big, single piece. Aesthetically and perhaps unsurprisingly, it doesn't look dramatically different from the 570S. Not that it's necessarily a bad thing but if McLaren told us the Artura was a facelifted version of that car, I would've believed them. Meanwhile, the new driver-centered interior contains an eight-inch touchscreen with Apple CarPlay and Android Auto, and it's capable of receiving over-the-air updates. It's also where drivers will get access to the car's all-important Variable Drift Control system first seen on the 720S.

For those fortunate enough to actually consider the McLaren Artura as a potential purchase, first deliveries are scheduled for the third quarter of 2021.