In the turbo version, the Mazda3 is all the fun of a Miata in sedan form. All I ask is better control of my music. 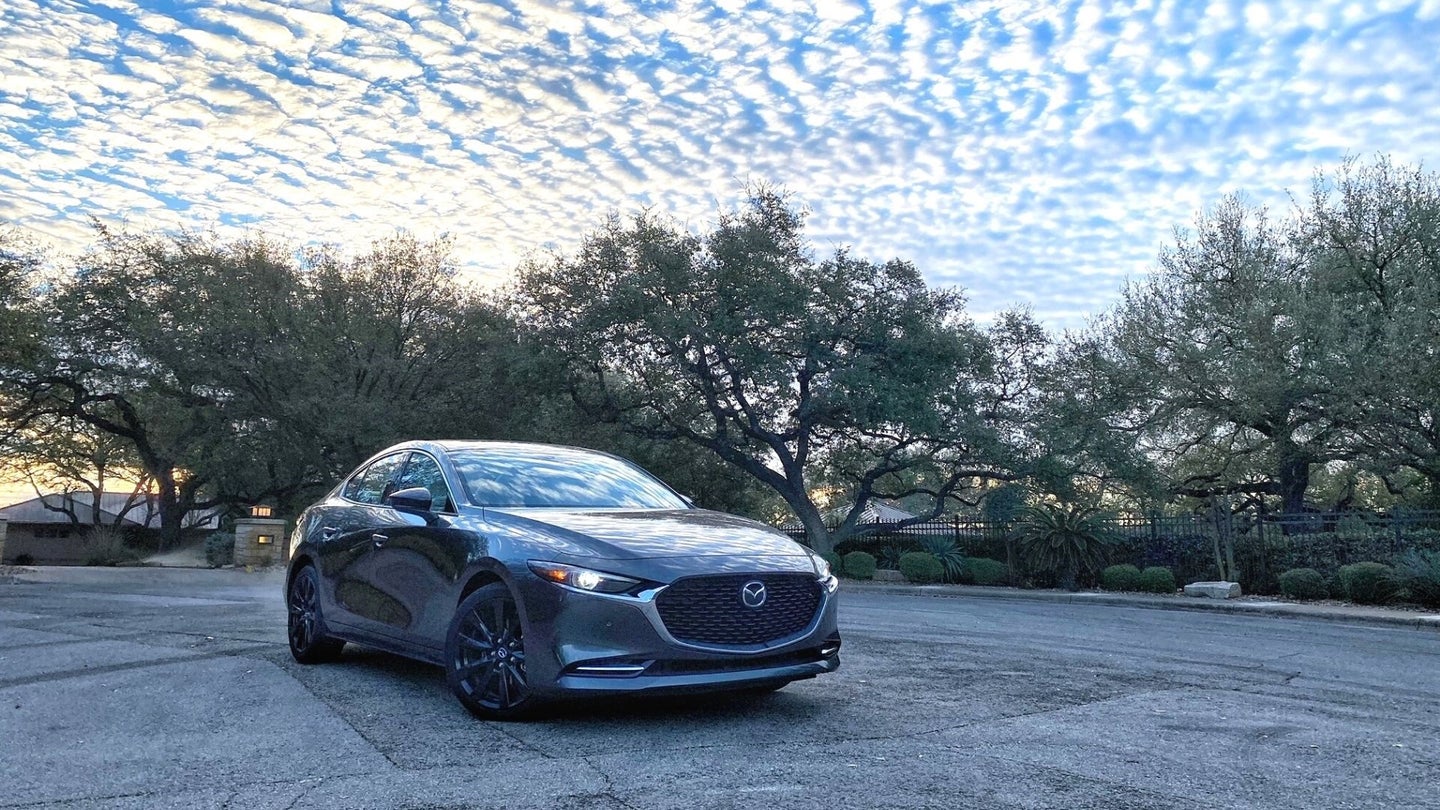 The 2021 Mazda3 2.5 turbo sedan is the girl next door: beautiful inside and out. The sleek lines and angular front end are a nice departure from some of its competitors and the cabin rises above its station with thoughtful design. There’s only one incongruous detail: the infotainment controls.

For an audiophile who likes to switch channels the way your dad likes to flip back and forth with the TV remote, it’s enough to drive you mad. The thing is, it could be so much better. It’s not the audio system, a respectable 12-speaker Bose premium setup that resonates through the vehicle and sounds delicious; the settings give you plenty of options to customize it. It’s the controller knob, which Mazda calls the Commander.

YouTuber Jill Ciminillo interviewed Mazda’s Manager of Vehicle Dynamics Dave Coleman about the controller setup, and he says it is designed for safety. The touchscreen requires the driver to look from the road to the touchscreen to their finger and back, which takes too much attention away from driving. The tactile buttons have a consistent feel and the screen is pushed further away, which means your eyes don’t have to travel as far to see what you’re doing.

In theory, the idea is solid. You use your right hand to twist the controller toward the category you want, and drill down from there by pushing it in. There are shortcut buttons surrounding the controller as well to get to that segment, and once you’ve driven it for a few days you remember which one is in which place. However, that’s where the ease of use stops. Coleman says that you can set and forget the audio controls and never look at them again. I beg to differ for two reasons: one, sometimes I want to skip from Hits 1 to Hair Nation (channel 2 and channel 39, respectively). Or maybe I want to switch from Coffee House to FM 94.7 to catch the daily pop quiz. For me, there are too many steps to get to each of those tasks.

The vexing part about all of this is that if Mazda put as much attention to detail into the functions of this system from a music lover’s perspective, it could be all they claim it is and more. The new Yukon Denali in my driveway right now has a knob that cruises through the stations with a visual representation that is marvelous and simple to understand. The Lexus ES I recently drove uses concentric knobs for tuning and volume, effectively using space.

And that’s the rub: the Mazda3, especially with the turbocharged 2.5-liter four-cylinder engine under the hood, is a dream to drive. The price starts at an astonishingly reasonable $30,050 for the turbo version. We’re talking Apple CarPlay and Android Auto, the upgraded audio system, heated seats, paddle shifters, the whole deal. Even a base Mazda3, which starts at $20,650 is inexpensive for all you get. On top of all of that, Mazda’s Soul Red Crystal Metallic is arguably the most beautiful shade of crimson on the market, and the artistry behind the way they created that red is impressive. The audio system design for the brand's newest vehicle, the CX-30, was integrated into the body even before some of the other components, so it's not as if Mazda doesn't care about the way it sounds.

One of my favorite automotive writers, Ezra Dyer of Car and Driver, sums up the Mazda3 turbo with style:

"The 2.5 Turbo has a much more grownup mien, both in its overall presentation and the way it drives. It's the high-school kid who can't wait to graduate and say goodbye to these infants. While the Subaru WRX is out playing ding-dong ditch with bags of flaming dog poo, the 3's 2.5 Turbo is brewing its own pour-over Sumatra and settling in for a postmodern reading of Homer's Illiad. It wears glasses even though it doesn't need them."

Mazda, hear my plea: talk to some audiophiles and work on the Commander for the next generation. It's the only thing stopping you from pure greatness. First and foremost, make it easier to change the channel or station with knob-in-knob functionality. Next, set up the screen so the presets are easily visible and simple to add and subtract. Third, a simple seek function for when you're on road trips and looking for a decent radio station would be helpful. I don't need a touchscreen, necessarily, but I do want to be the commander (see what I did there?) of my listening pleasure. Your move.