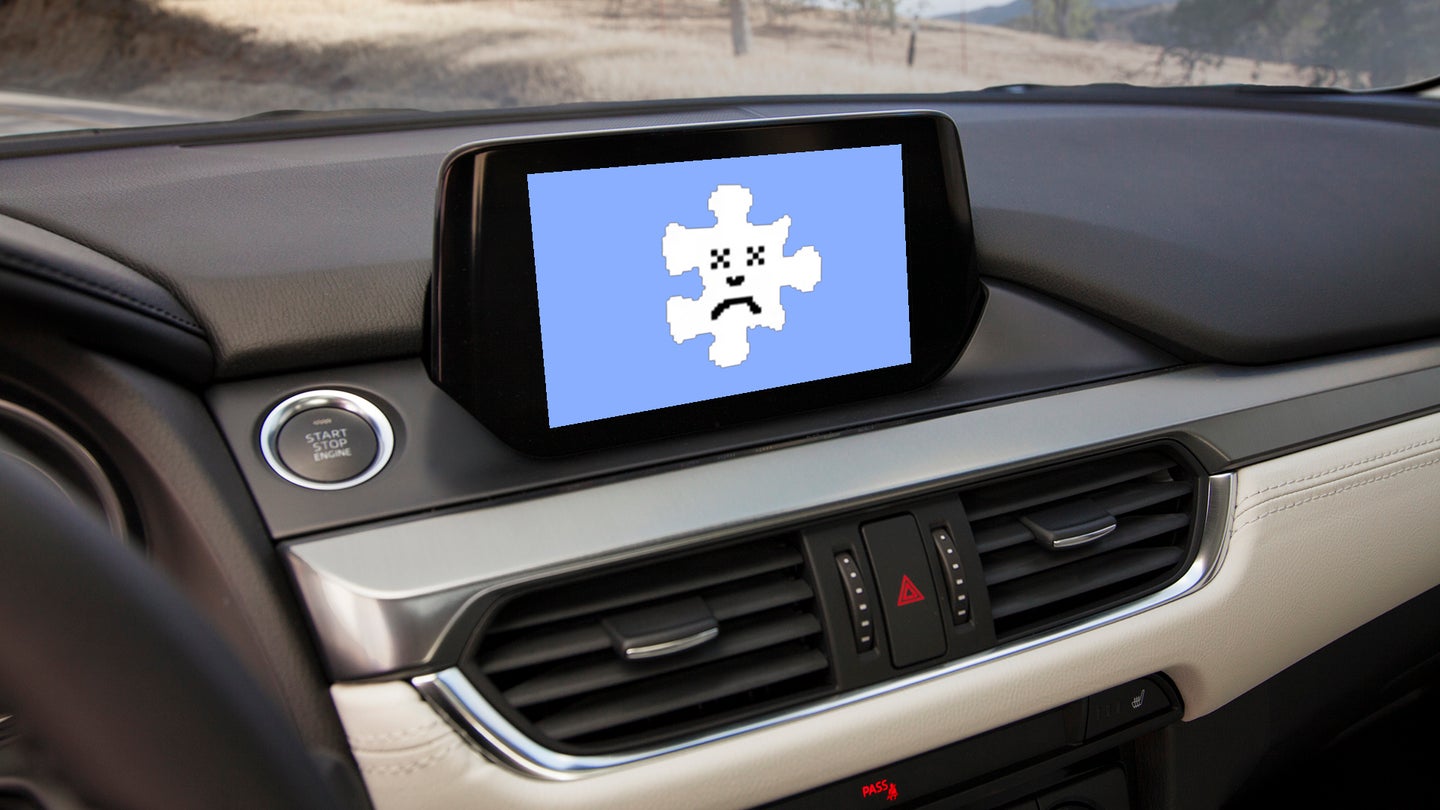 If you live in the Seattle area and drive a Mazda built between 2014 and 2017, I sure do hope you like listening to National Public Radio. Why? Because you may not have another choice if you accidentally set your radio to 94.9 FM HD, which carries local NPR affiliate KUOW. Recently, Mazda owners in the Emerald City have been reporting that the frequency is permanently crashing their cars' infotainment systems and leaving key features like GPS, Bluetooth connectivity, backup camera, and yes, the radio unusable, stuck playing 94.9 FM. Yes, it's a good old fashioned car mystery—one that Mazda thinks it's solved, but won't be able to fix quickly for those affected.

According to GeekWire, it all started about a week ago, when reports started popping up on Reddit and other forums of Mazdas in the Pacific Northwest having their Mazda Connect systems "corrupted" and stuck playing KUOW after tuning in, with all other infotainment features knocked offline. Many of the vehicles appeared to be stuck in a reboot cycle. Dozens of perplexed owners began showing up at area Mazda dealerships, who were similarly confused; one service department reportedly blamed the problem on a recent shift from 3G to 5G cellular networks, a theory that gained some traction in the wake of the 5G vs airlines debacle.

However, that likely has nothing to do with the issue, as terrestrial FM radio signals in the U.S. operate very low on the radio spectrum (between 87.9 and 107.9 MHz). Cellular 3G bands operate above 800 MHz and 5G closer to the millimeter-wave spectrum, though some bands dip down to 600 MHz, which wouldn't be in the realm of causing interference.

Another dealership told the Seattle Times that the issue was related to a corrupted CMU—that's the "Connectivity Master Unit" found in Mazda vehicles which controls the infotainment system and are seemingly not free of other issues outside of the KUOW problem. That particular dealer noted that at least "seven to 10 customers" had the issue which would require a $1,500 replacement. A comment on Reddit mentions that one dealership noted at least 50 cases.

On Monday night, Mazda finally broke its silence and weighed in. And it sounds like the real culprit is software-related.

If you're a frequent terrestrial radio listener, you probably know of HD Radio branding. For those that don't, HD Radio is a digital broadcast format of a radio station signal and enables certain digital information to be pushed down to a receiver, such as artist and song name, and even album art. That last little bit seems to be the source of Mazda's problem. In a statement to The Drive, Mazda said the issue began when "a radio station in the Seattle area" accidentally included album art without an image type extension, triggering the system crashes.

"Between 1/24-1/31, a radio station in the Seattle area sent image files with no extension (e.g., missing .jpeg or .gif), which caused an issue on some 2014-2017 Mazda vehicles with older software. Mazda North American Operations (MNAO) has distributed service alerts advising dealers of the issue," a spokesperson said.

Meanwhile, KUOW's Director of Operations Dane Johnson told The Drive that the station has not received an agreed-upon reason for the Mazda Infotainment issue. KUOW also published a blog post acknowledging the problem and claiming it's investigating on its side.

"KUOW is aware of an apparent issue between our signal and some Mazda infotainment systems, causing radios to reboot when they connect to KUOW’s 94.9 FM signal," the statement reads. "We have been in contact with Xperi, the company who owns the technology behind HD Radio, and have given them complete access to our transmitters to investigate what is causing this issue. Our operations team is doing everything they can to support them in finding a quick resolution."

Without digging into the Mazda Connect code, there's no way to speculate about an exact cause, but there are clear gaps in the way HD radio signals are regulated. In a best practices report published by the National Association of Broadcasters (NAB) in 2019, the trade association found room for improvement in the way that radio stations broadcasted certain information, as well as the way that infotainment systems displayed data received using HD Radio's Artist Experience.

"The display of radio station text and image information is generally inconsistent, creating a sub-optimal user experience," said the NAB in its findings. "Standards for formatting and composing information for dashboard display need to be developed and adhered to by broadcasters. There is a lack of consistency in the use of display pictures and illustrations when music is playing."

As for the fix, well, that's a whole different story, and one that will take some time to play out.

"While dealers are currently experiencing parts delays due to shipping constraints, MNAO will support impacted customers with replacement parts," the Mazda spokesperson said. "These customers should contact their local Mazda dealer who can submit a goodwill request to the Mazda Warranty department on their behalf, order the parts, and schedule a free repair when the parts arrive."

We also still don't know exactly which parts will be swapped out, or why the crash cycle isn't reversible with a software update or reset. But believe it or not, this isn't the first time that Mazda has had a weird software glitch in its infotainment systems. Back in 2019, tech podcast Reply All tracked down a separate issue causing certain audio files to cause Mazda infotainment systems to reboot.

The issue uncovered came down to an input validation. A certain combination of characters in an audio file would cause the vehicle to throw an exception. Normally, these types of errors are handled by a block of code that performs a task to "handle" it. In Mazda's case, the exception was not handled, and, as explained by a former software engineer in the episode, the infotainment system would stop sending a heartbeat signal to the hardware, which resulted in the entire infotainment system rebooting any time "%I" was fed into the title or artist field.

Oddly enough, the Mazda reportedly tested in the podcast was a 2016—which falls directly within the scope of vehicles affected by this newest glitch. Whether or not the two issues are related is unknown.

Some vehicles enrolled in FSD beta experienced false collision warnings and phantom braking due to a software glitch.