The MKII Sprite was missing a nose and had layers of paint and Bondo, marring its quirky appeal. 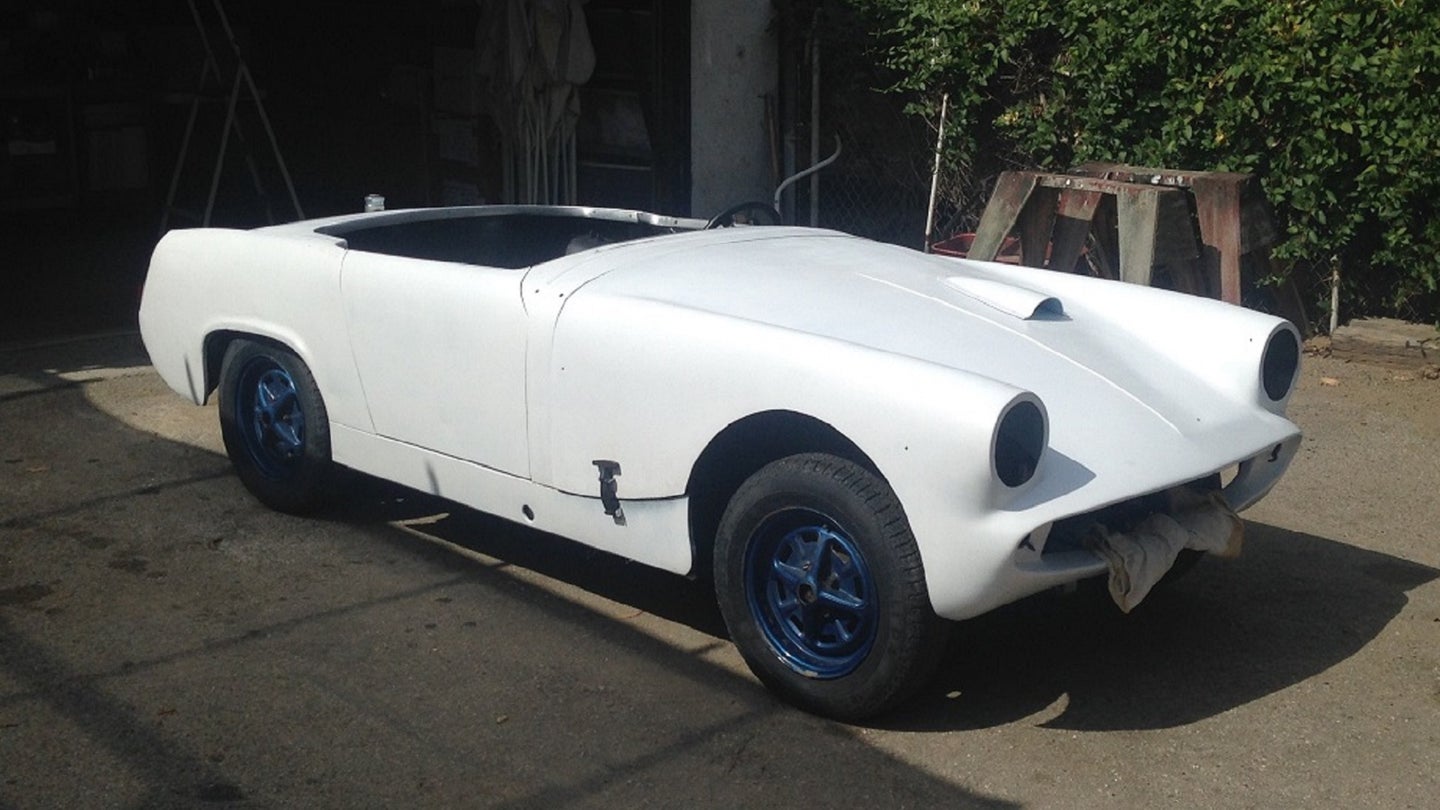 Michael Satterfield must have seen something special in the 1962 Austin-Healey Sprite because he plunked down $100 for it even though the nose was missing and it was in rough shape. In Concours condition, a 1962 Sprite could fetch $20,000 or more. Even in good condition, the Sprite is worth about $8,000, according to Hagerty. Satterfield’s Sprite was not only missing a nose, but it had also been painted and Bondo applied in multiple layers over its original ivory exterior.

Austin-Healey’s tiny, no-frills “Bugeye” Sprite was launched in 1958 and nearly 50,000 were sold before it got an update in 1962. Once it emerged from its facelift as an MKII, the Sprite looked a lot like its kissing cousin, the MG Midget. In fact, the construction of the Sprite was outsourced to MG, so that made sense.

This pint-sized two-door convertible was offered with two engines: a four-cylinder, 958 cc engine, or a slightly bigger 1098-cc powertrain. It made 47 or 56 horsepower, respectively. The top speed for the Sprite, when it was new, was 88 miles per hour, and it took a full 16 or more seconds to get to 60 mph. It’s feather-light, too, at just under 1500 pounds.

Carroll Shelby himself owned a 1959 Bugeye Sprite that served as a training car at his School of High-Performance Driving, hosted at the old Riverside International Raceway road course in California. At that school, Shelby owned three training cars, including the Sprite. Shelby handed over the driving school to Bob Bondurant in 1965, then sold his Sprite.

When Satterfield was 14, he bought a 1954 Ford Crestline from a neighbor for $150 and started working on it as a project car with a friend. They got it running drove it around on “farm business” because they were driving underage. After fixing it and cleaning it up, Satterfield sold it for $1500; by the time he was old enough to drive legally, he had already owned and flipped six cars. As of today, he has bought and sold more than 100 cars, and the Sprite next in line. You name it, he’s probably had something like it, from old Lancias to Maseratis.

Satterfield fixes up cars not just for himself, but for loved ones as well. One of his cousins has seven children; Satterfield promised each child a car if they opted to go to college. One of them was looking at a functional but not-so-cool Ford Festiva, and his fairy godfather fixed up a white-on-white 1986 Mustang convertible for him instead. The young cousin drove that Mustang all the way through college at Pepperdine and law school at Minnesota before he finally sold it.

When Satterfield bought the Austin-Healey in 2014, it was tucked away in an old airplane hangar, where it had been parked since the 1970s in Perris, California. Satterfield tracked down a new nose northwest of Perris, in Big Bear. He put the Sprite back together while he was still living in California, but other projects got in the way and the little sports car sat idle for a few years. Then Satterfield moved to Japan for six months, then back to California. Finally, he trailered the Sprite with a GMC Sierra to Texas, where he lives now.

In a chaotic and crazy year, Satterfield co-hosted the inaugural Groesbeck Grand Prix, which was created to bridge the gap between car shows and vintage racing at Old Fort Parker historic site in Groesbeck, Texas. With a limited number of tickets and COVID-19 precautions in place, the event sold out days before the event. Satterfield is not planning to race his Sprite–which will be restored to its original exterior color– but it will serve him well as a rolling promotional car for the Grand Prix.

He’s not finished with this Austin-Healey yet, however; he’s thinking custom gauges from Dakota Digital and a Miata motor might be just what it needs. This rescue vehicle is already worth much more than the original $100 Satterfield paid for the car. And he's not ready to flip it yet, so wait your turn.

Correction: Saturday, Jan 2 @ 12:23 pm ET: A previous version of this story did not make it clear that the Sprite in the photos is an MKII, not a Bugeye. The Drive regrets the error.