The Lamborghini SC20 Is a 759-HP V12 Speedster, and They’re Only Building One of Them

It's based on the Aventador and was engineered by the racecar aces at Squadra Corse. 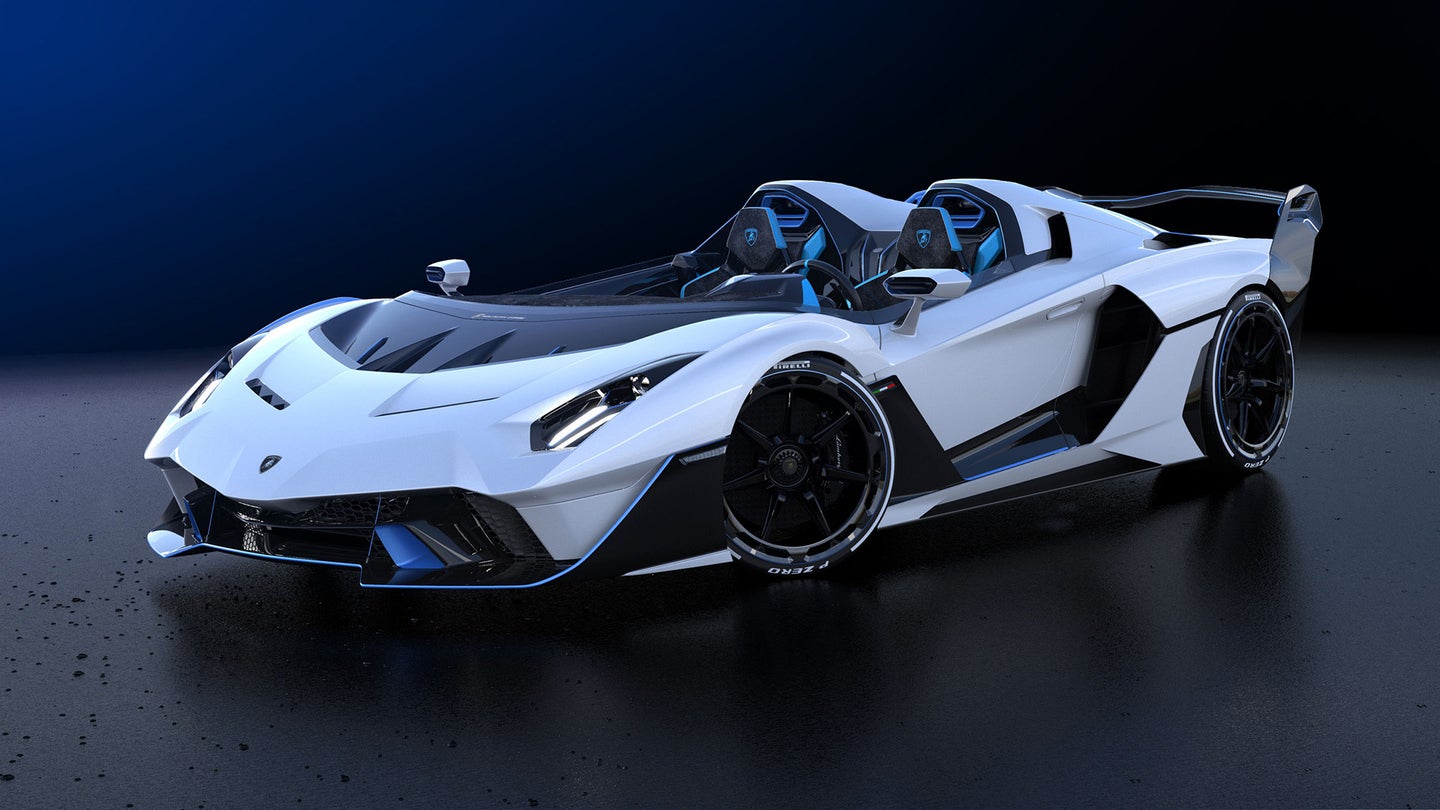 Going one major step further than selling just radical roadsters, Ferrari, Aston Martin and McLaren all have roofless speedster offerings now, with perhaps the McLaren Elva being the most suited for track action. Now, Lamborghini is also ready to present its latest, the SC20, a car we could simply describe as the Aventador J of the 2020s. First spotted in October, it's also the second one-off engineered by the motorsport aces at Squadra Corse, coming two years after the equally unique SC18 Alston, another Aventador-based track favorite from Sant'Agata Bolognese.

With the SC20 being road-legal in certain parts of the world, Lamborghini decided to give it somewhat less power than the track-only SCV12 coupé, keeping its 6.5-liter naturally aspirated V12 at Aventador SVJ levels to deliver 759 horsepower. It revs all the way to 8,500 rpm, and the Lamborghini V12 develops 531 pound-feet of torque at 6,750 rpm. The gearbox is borrowed from the Aventador—a seven-speed Independent Shifting Rod (ISR) system, connected to all four wheels featuring an electronic central differential. Wrapped in Pirelli PZero Corsa tires, the SC20 rolls on 20- and 21-inch centerlock forged alloy wheels. 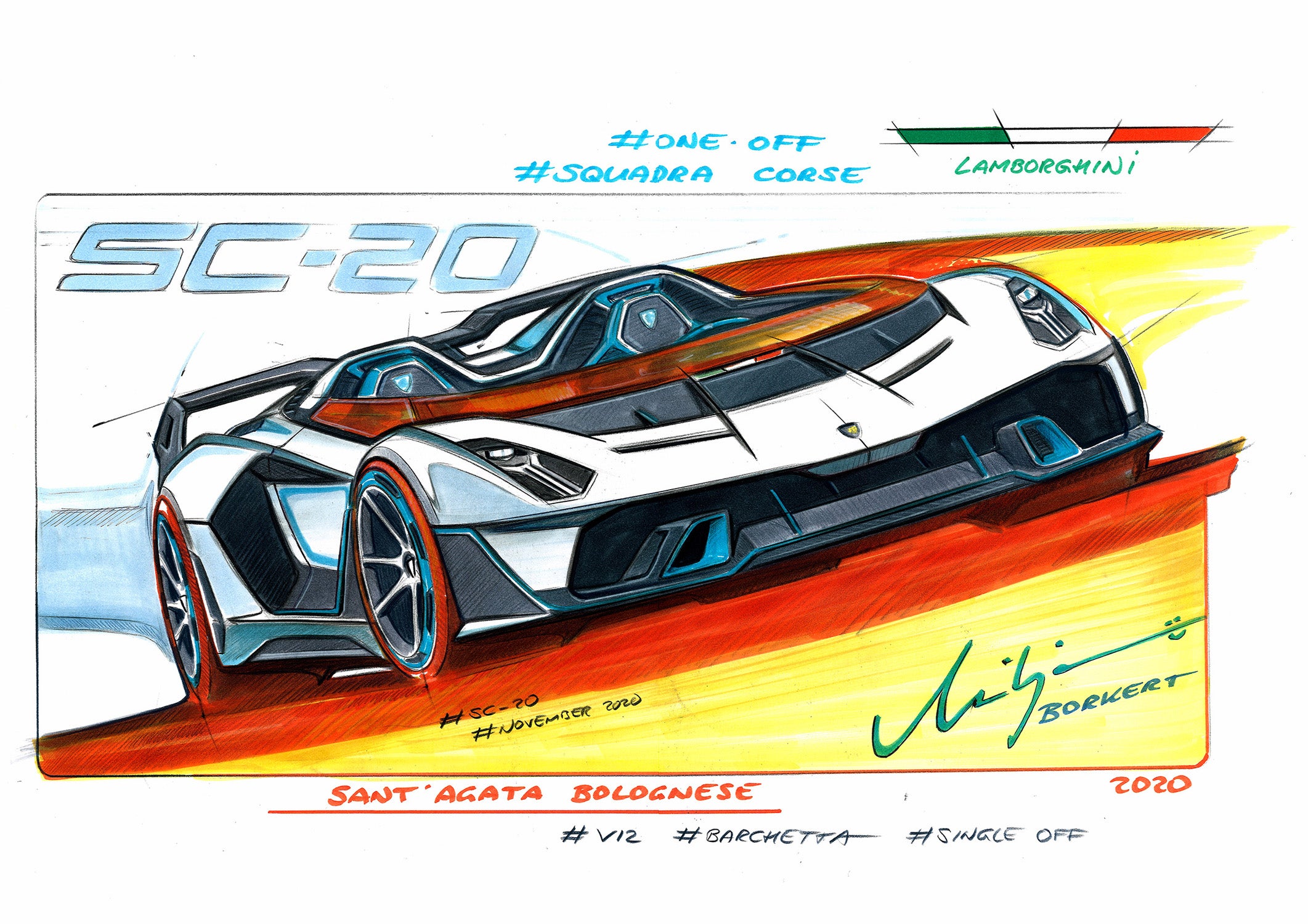 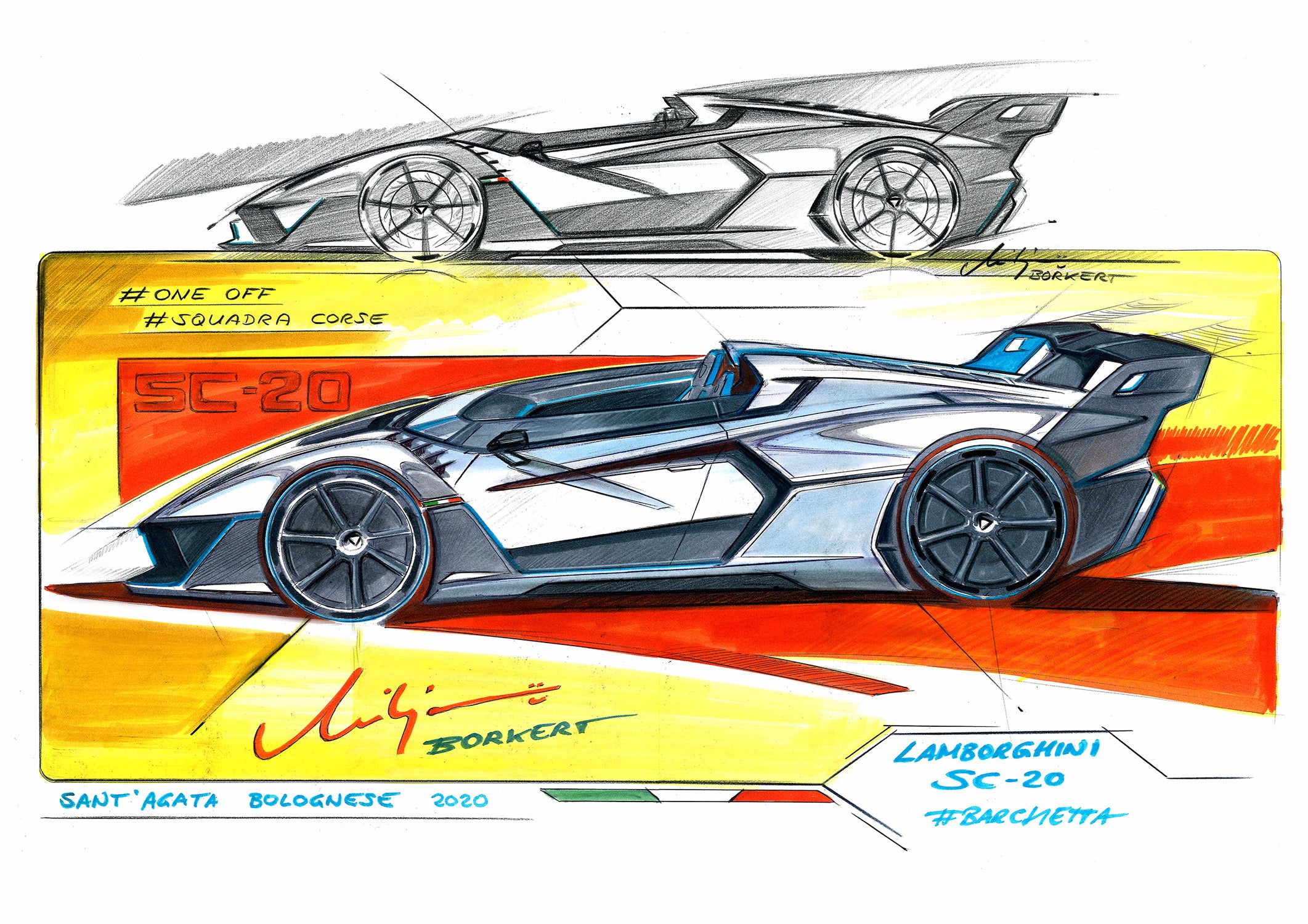 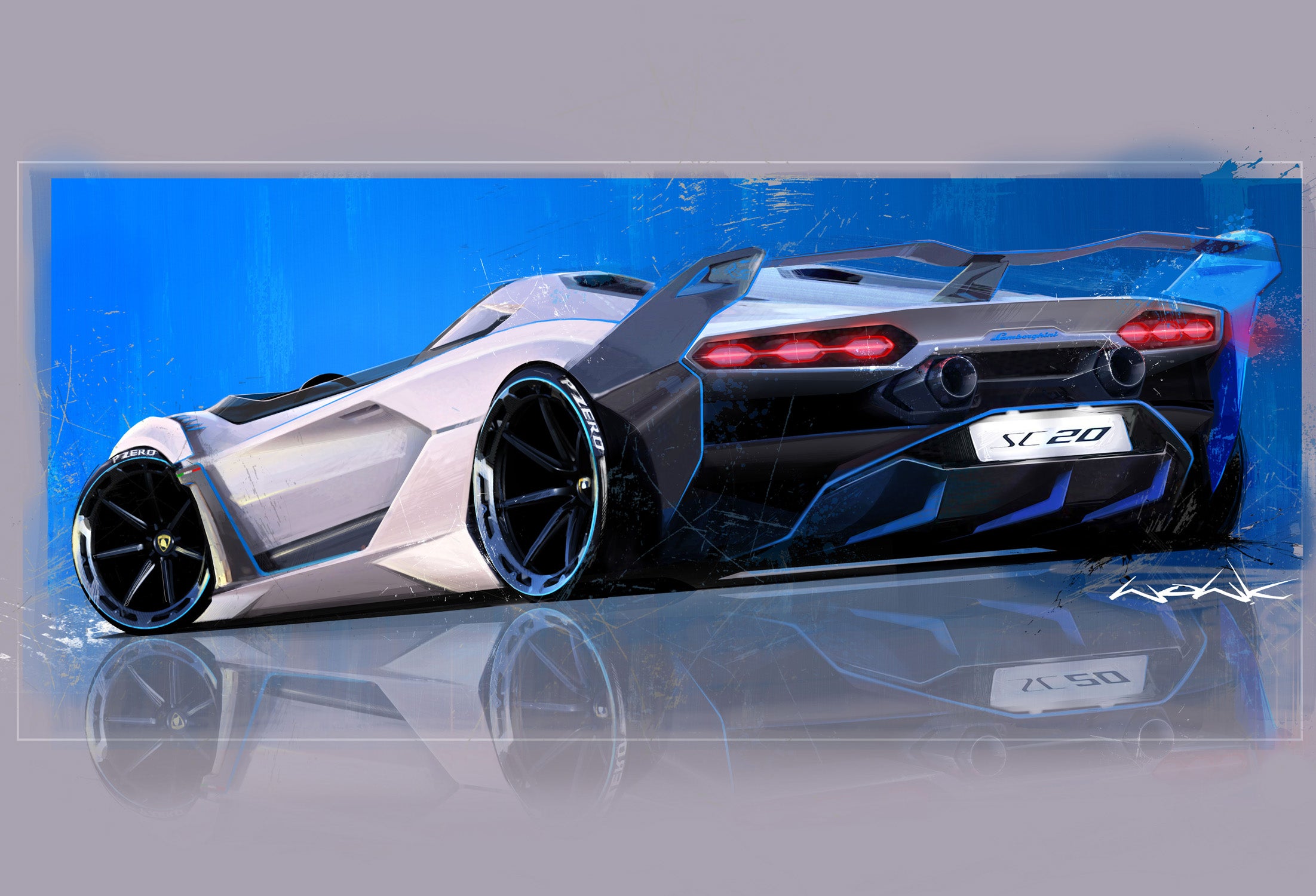 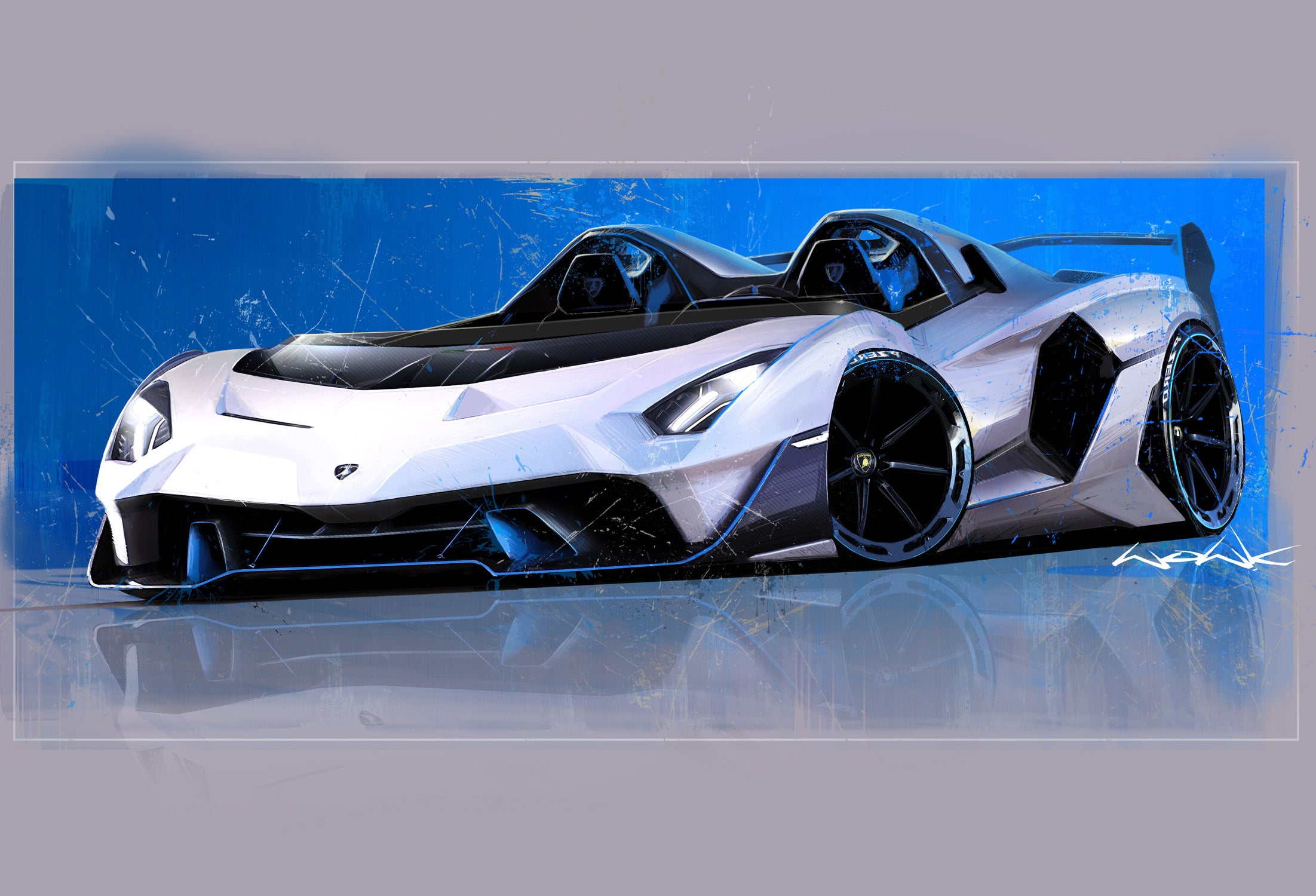 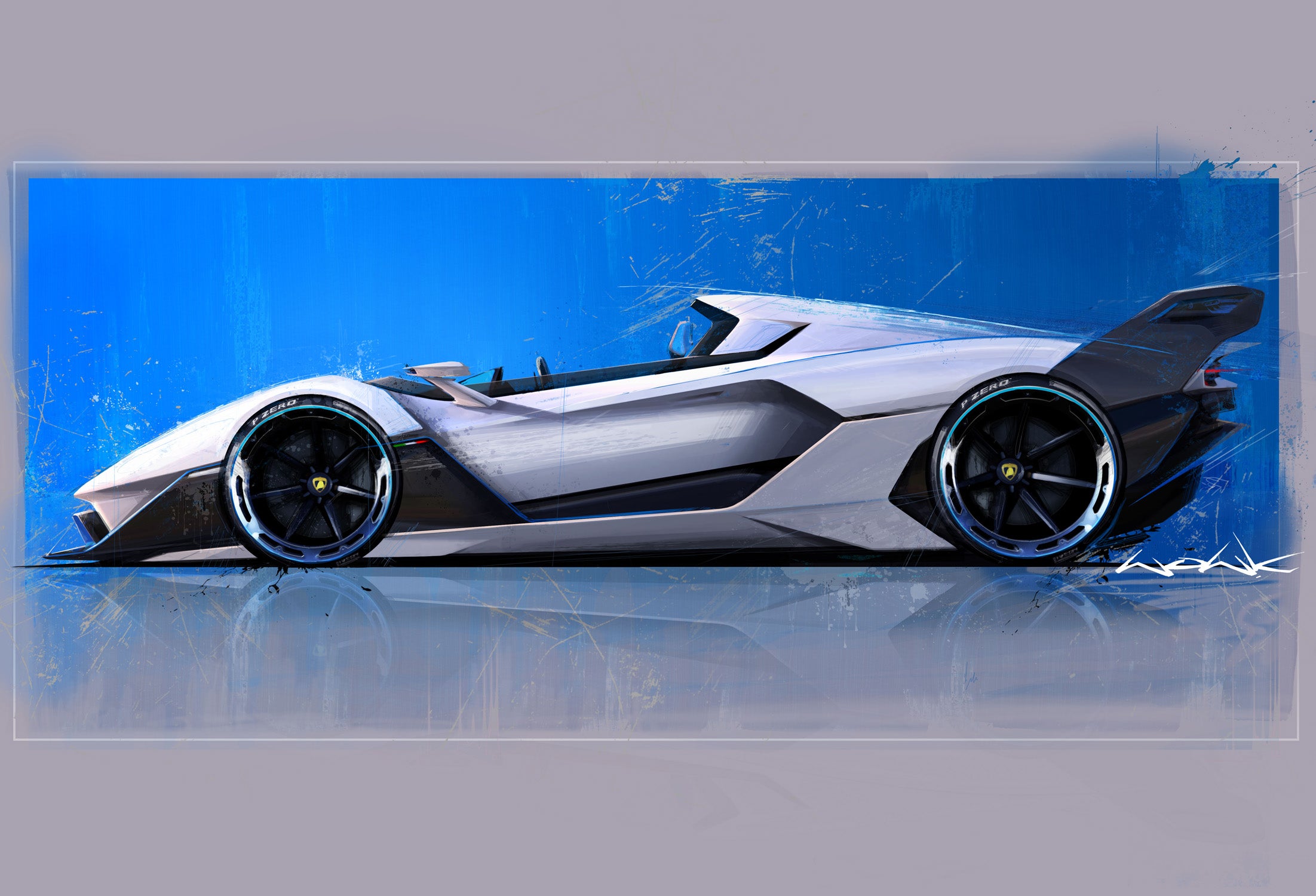 Mitja Borkert, head of design at Lamborghini Centro Stile, says the main inspirations for this one-off were "the Diablo VT Roadster, Aventador J, Veneno Roadster and Concept S," based on the Gallardo. Out of this quartet, only the Diablo VT Roadster wasn't a proper speedster. Instead, it was a prototype with a cut windshield presented by Lamborghini in 1992, with the intention of putting the special into limited production. By 1995, that plan was canceled and the factory sold off its golden Diablo VT prototype.

Instead of gold, the new SC20 features a white (Bianco Fu) base with a contrasting blue (Blu Cepheus) livery. The same shade is found in the interior, along with black (Nero Cosmus) and yet another white (Bianco Leda). 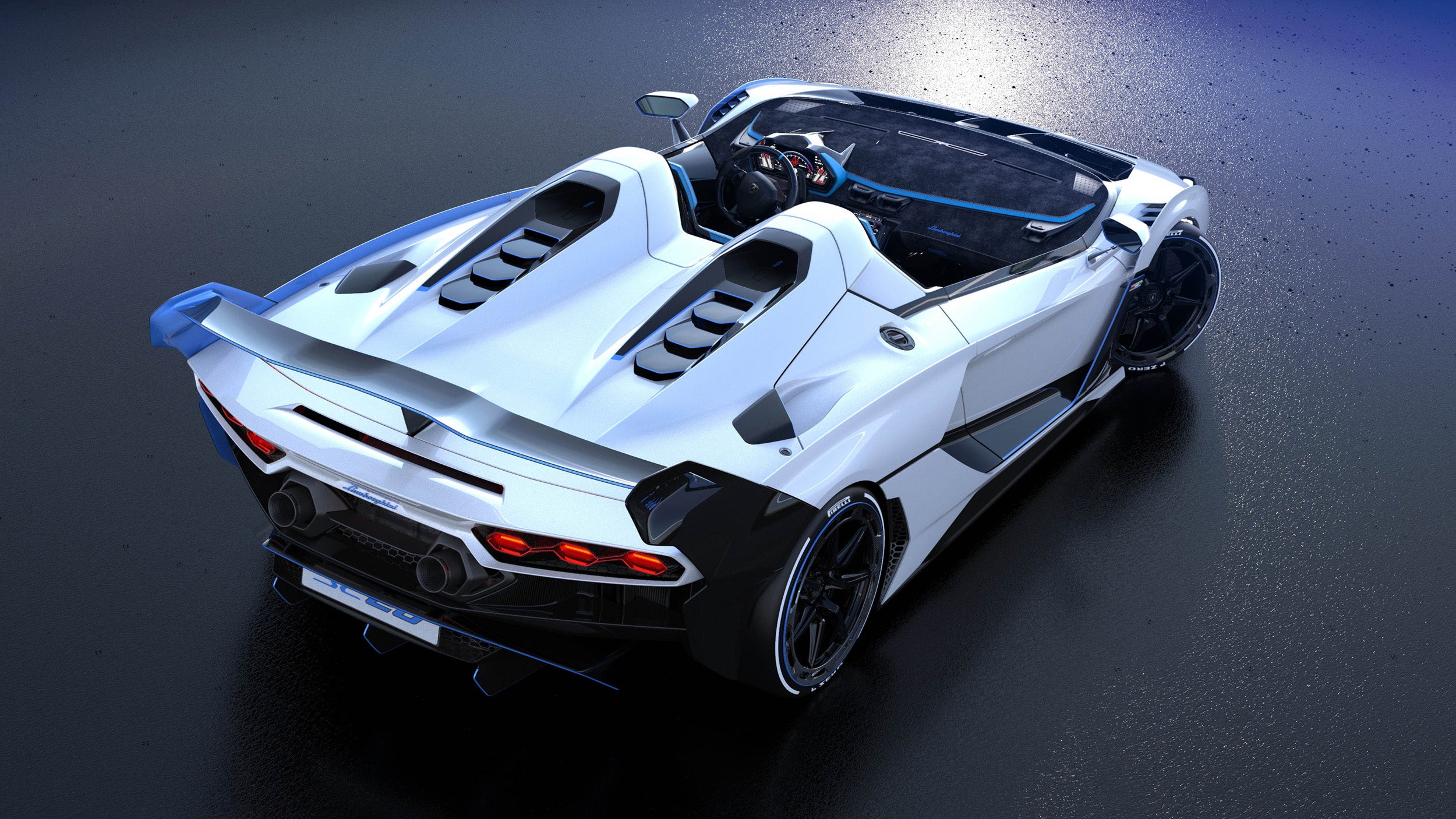 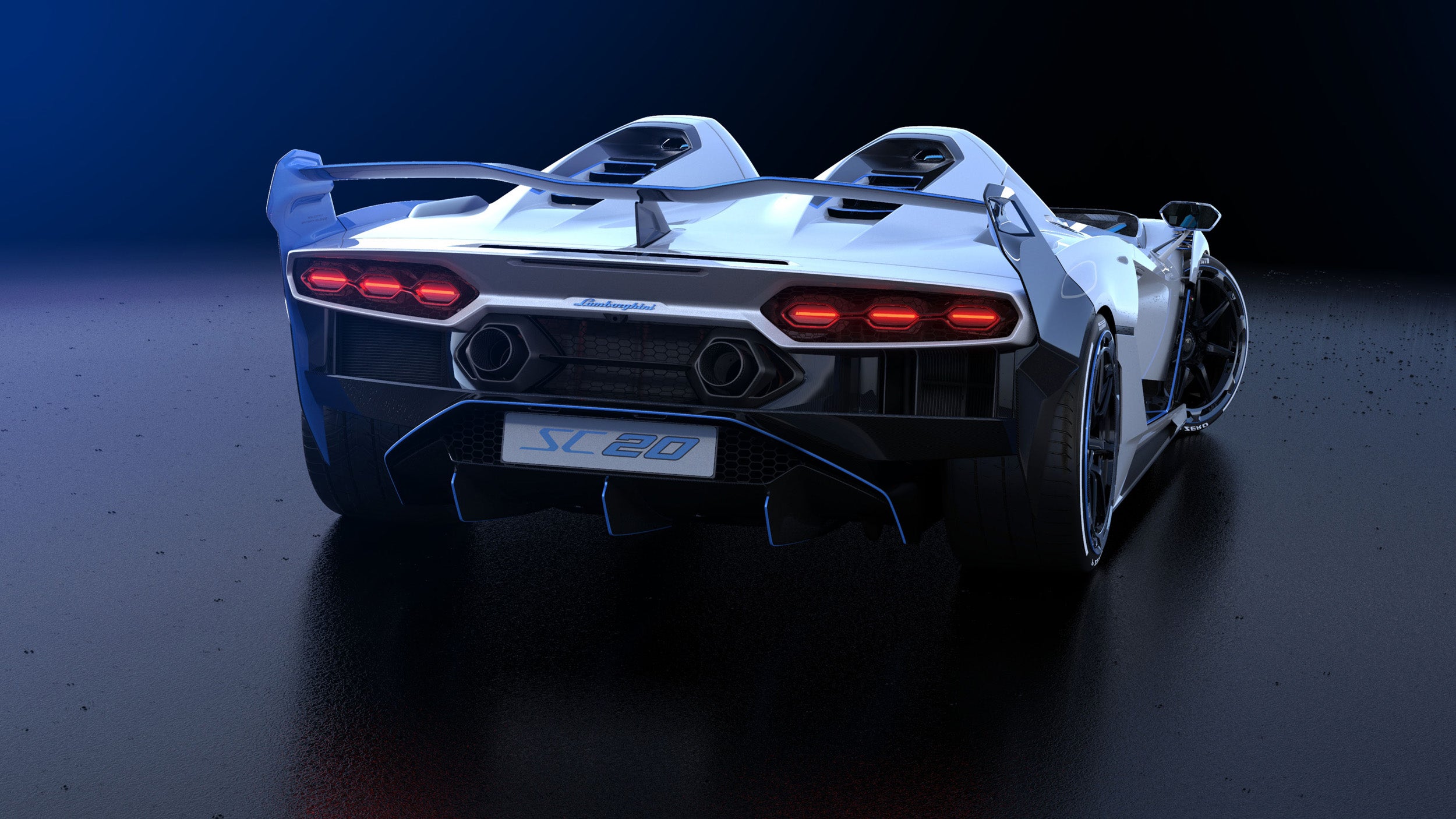 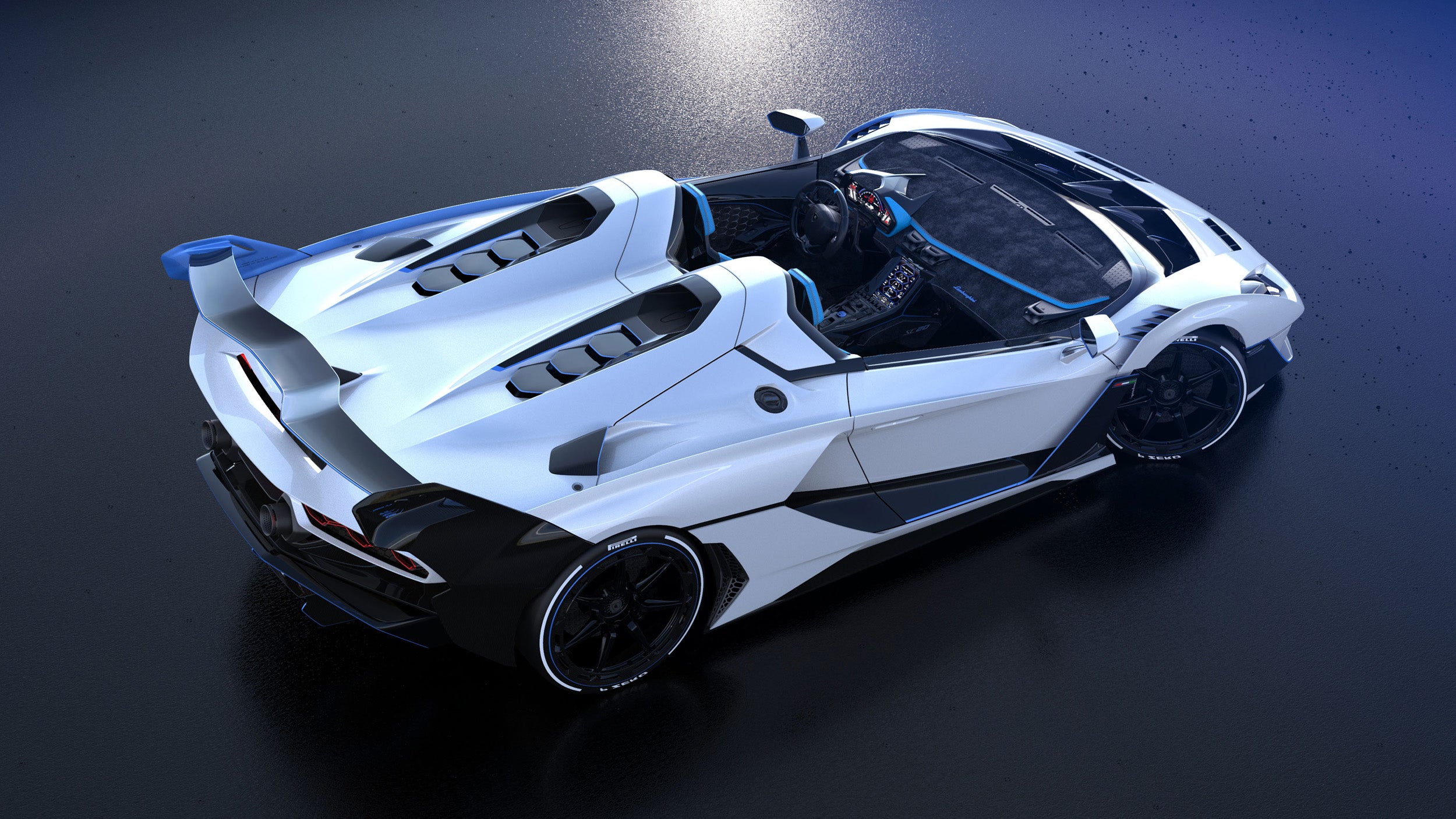 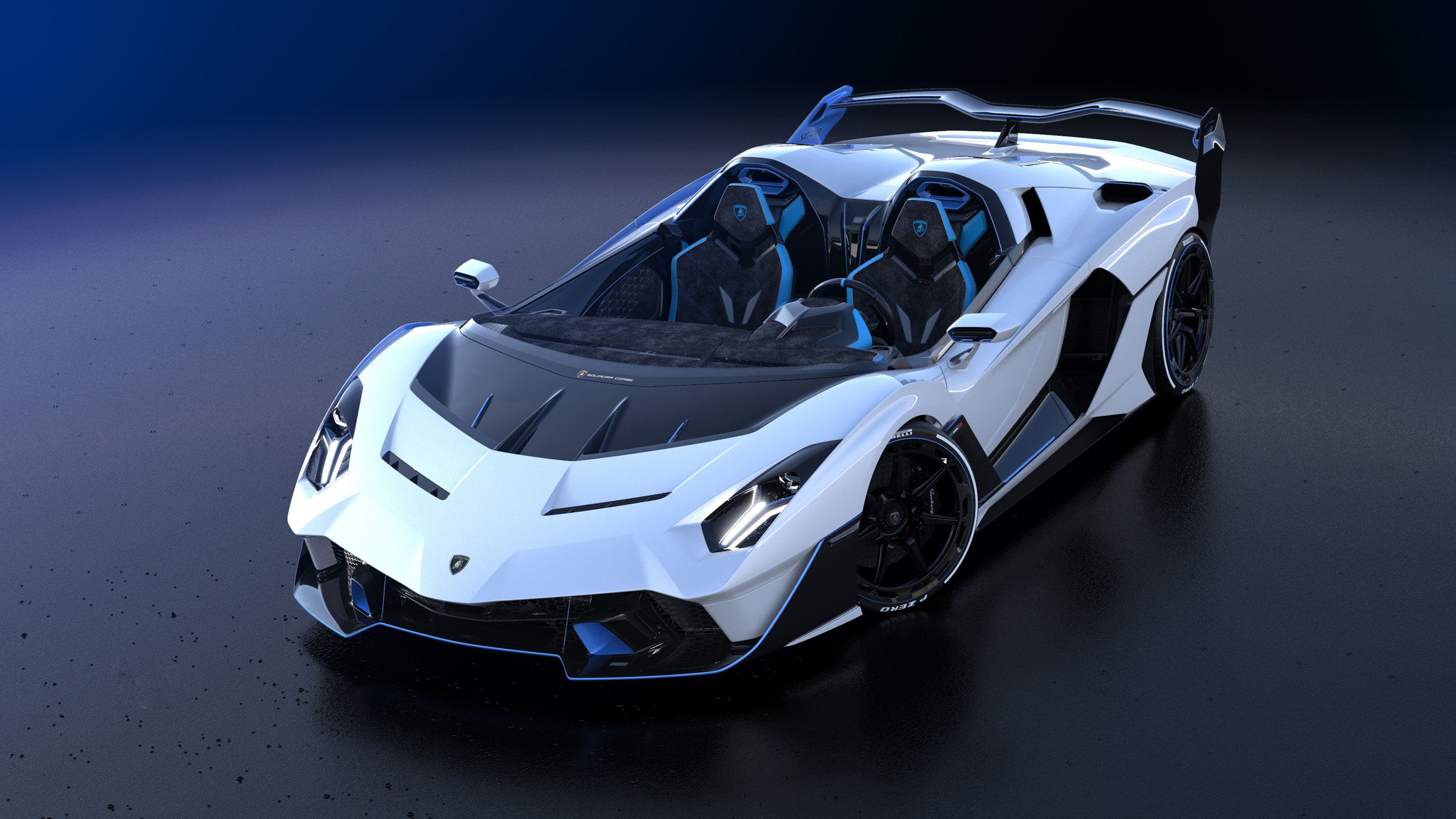 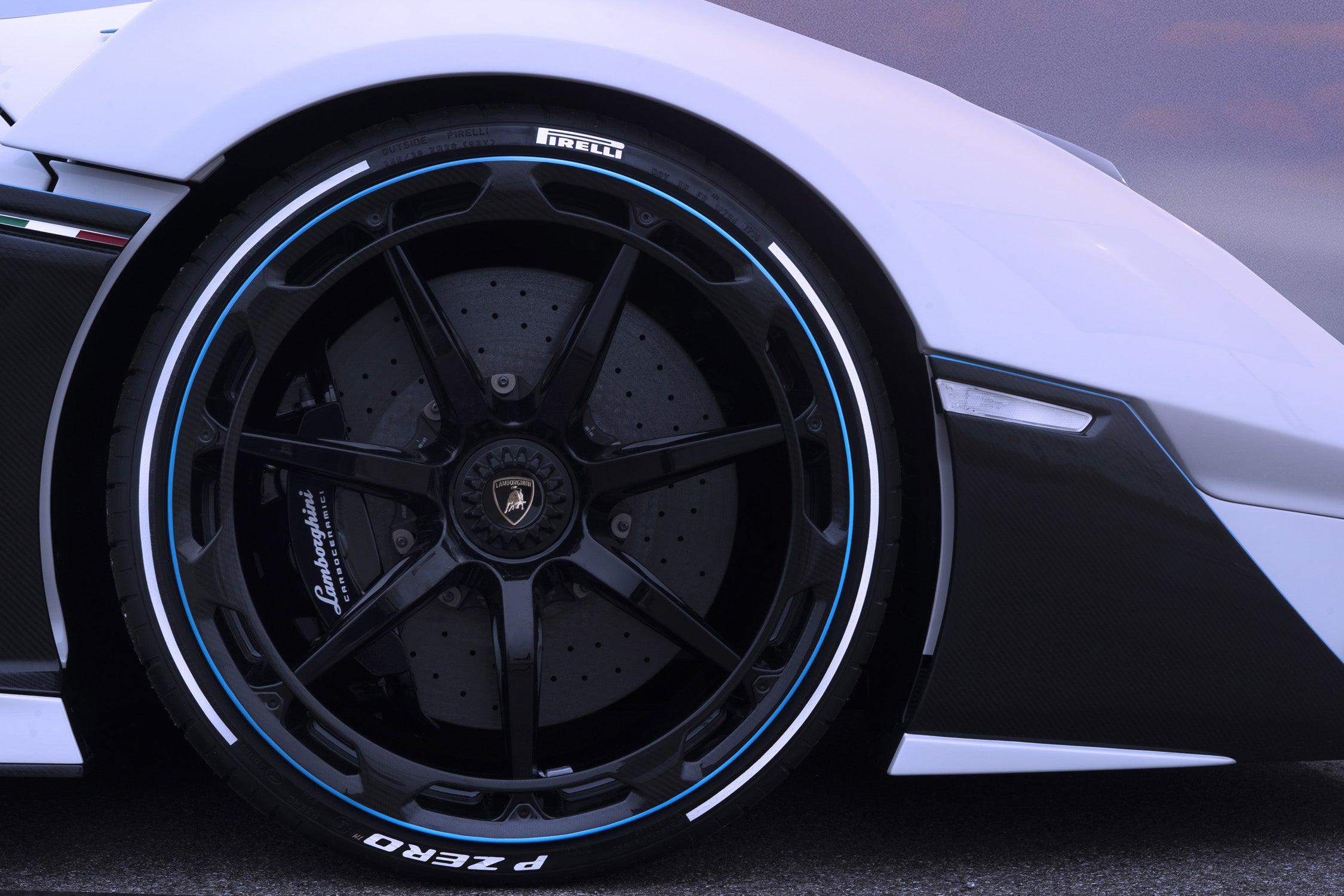 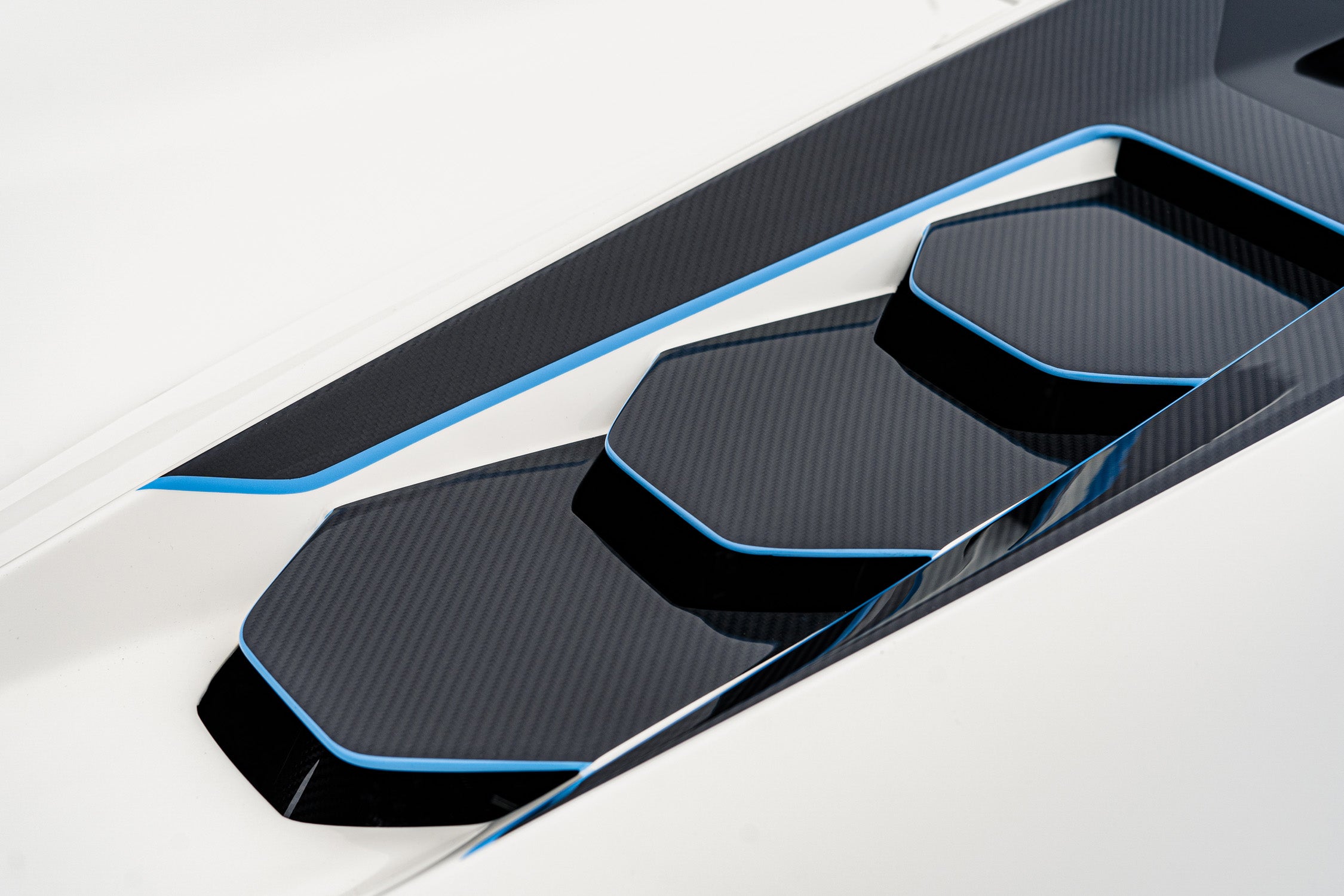 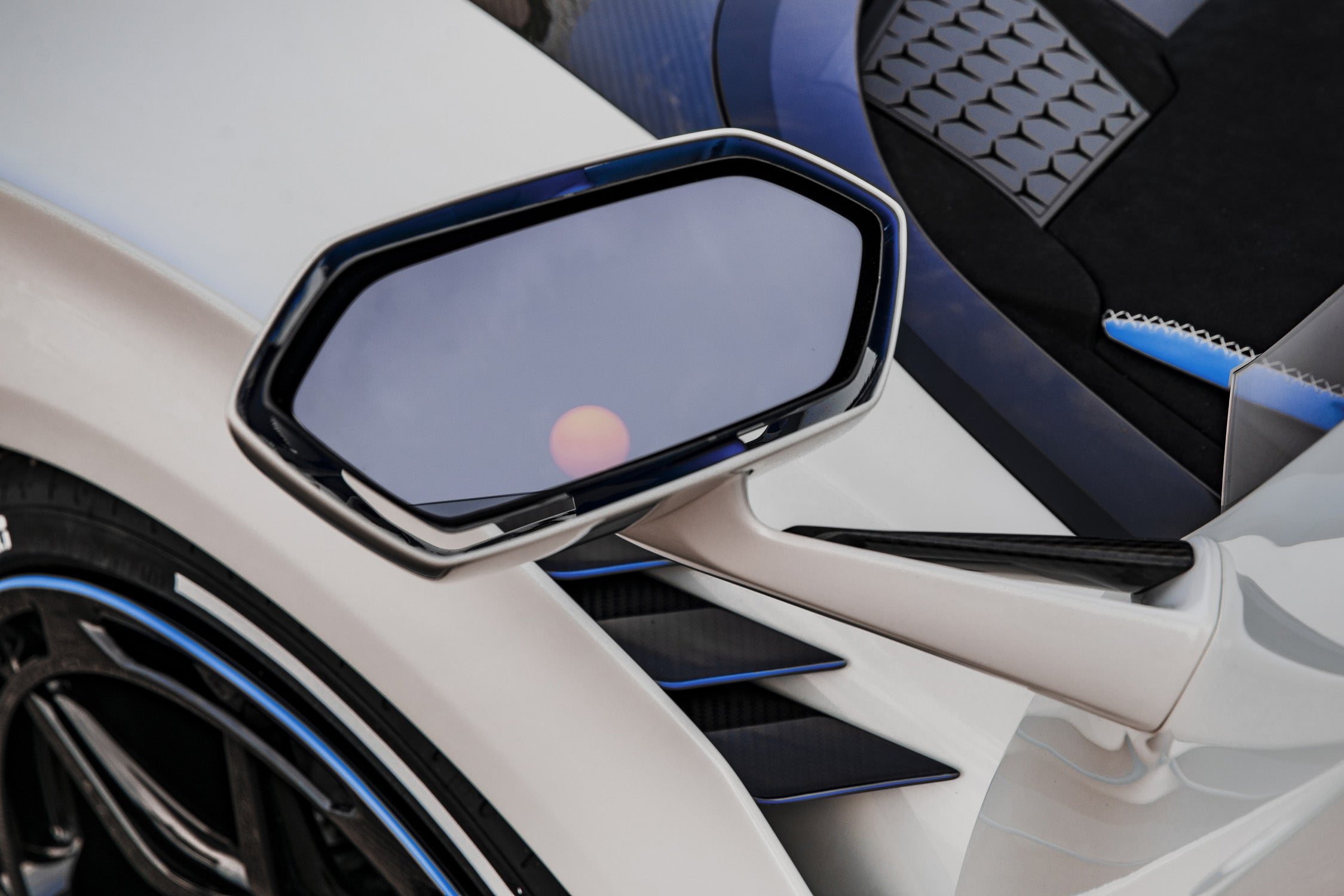 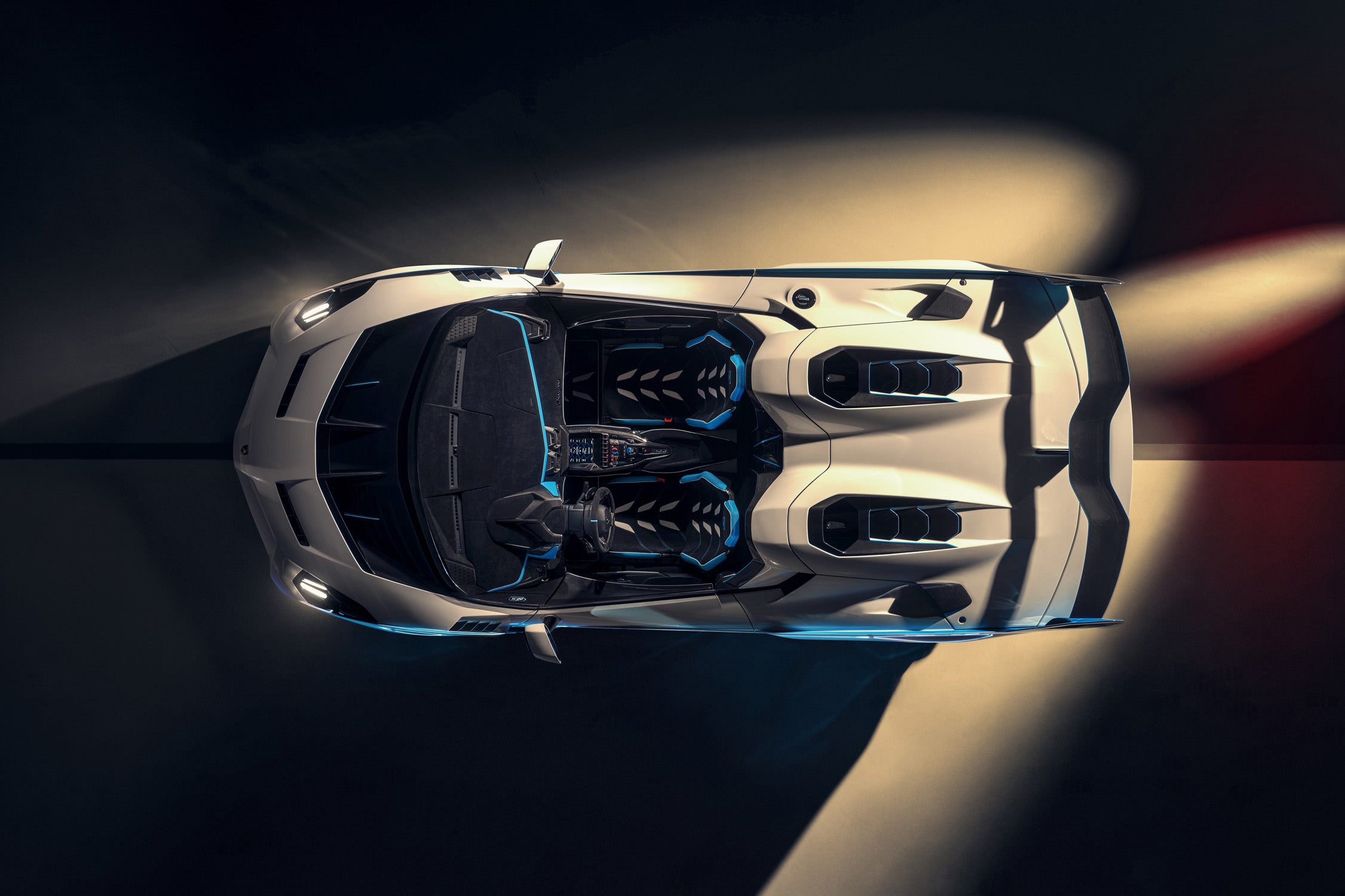 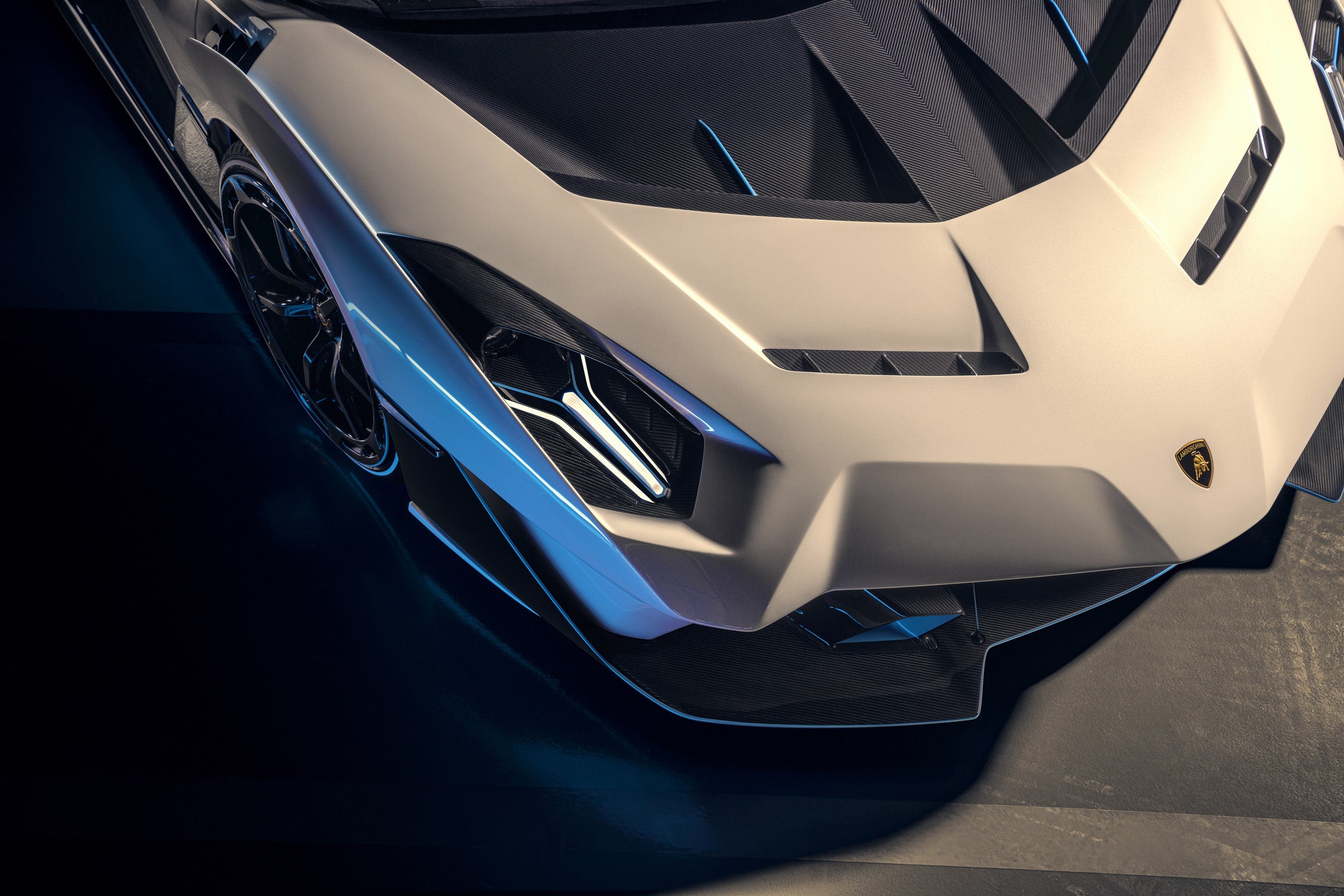 Pretty much everything is made of carbon fiber on this car, including its hand-polished exterior panels and the exposed carbon dashboard cover, central console, rear wall, door panels and steering wheel trim. Lamborghini says the front splitter, with its two fins, as well as the air intakes through the hood were inspired by the Huracán GT3 Evo, while the rest of the aerodynamic package comes from the Essenza SCV12 program. The air vents were created using 3D printing technology.

The SC20's large passive carbon fiber wing can be set in three different positions depending on your downforce requirements. Once that's settled, inside, this two-seater features carbon fiber seats with a combination of Alcantara and leather, while its door handles are machined from a chunk of aluminum.

Lamborghini's Aventador successor will be a hybrid V12 supercar, and one featuring more traditional electrification than the limited production Sián FKP 37. Instead of supercapacitors, get ready for lithium-ion batteries as Lamborghini does exactly what Ferrari has to: find ways to extend the life of its exhilarating naturally-aspirated V12.

While Lamborghini was busy editing the photos of its excellent SC20 gallery (partly shot at the Medicina Radio Observatory just outside of Bologna), we also learned that the Volkswagen Group will be keeping Lamborghini, Ducati and Bentley as the world makes its shift towards electric drive. 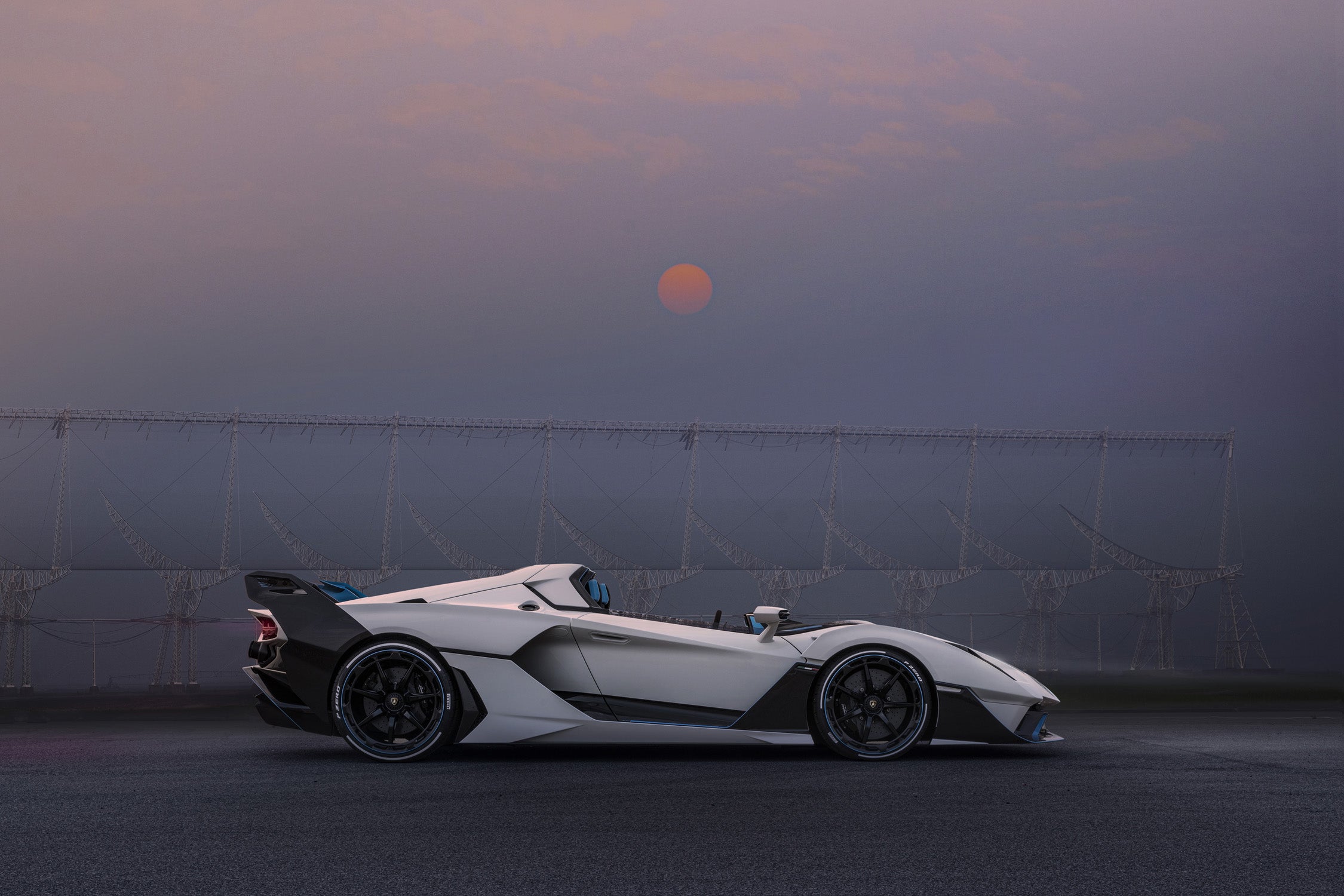 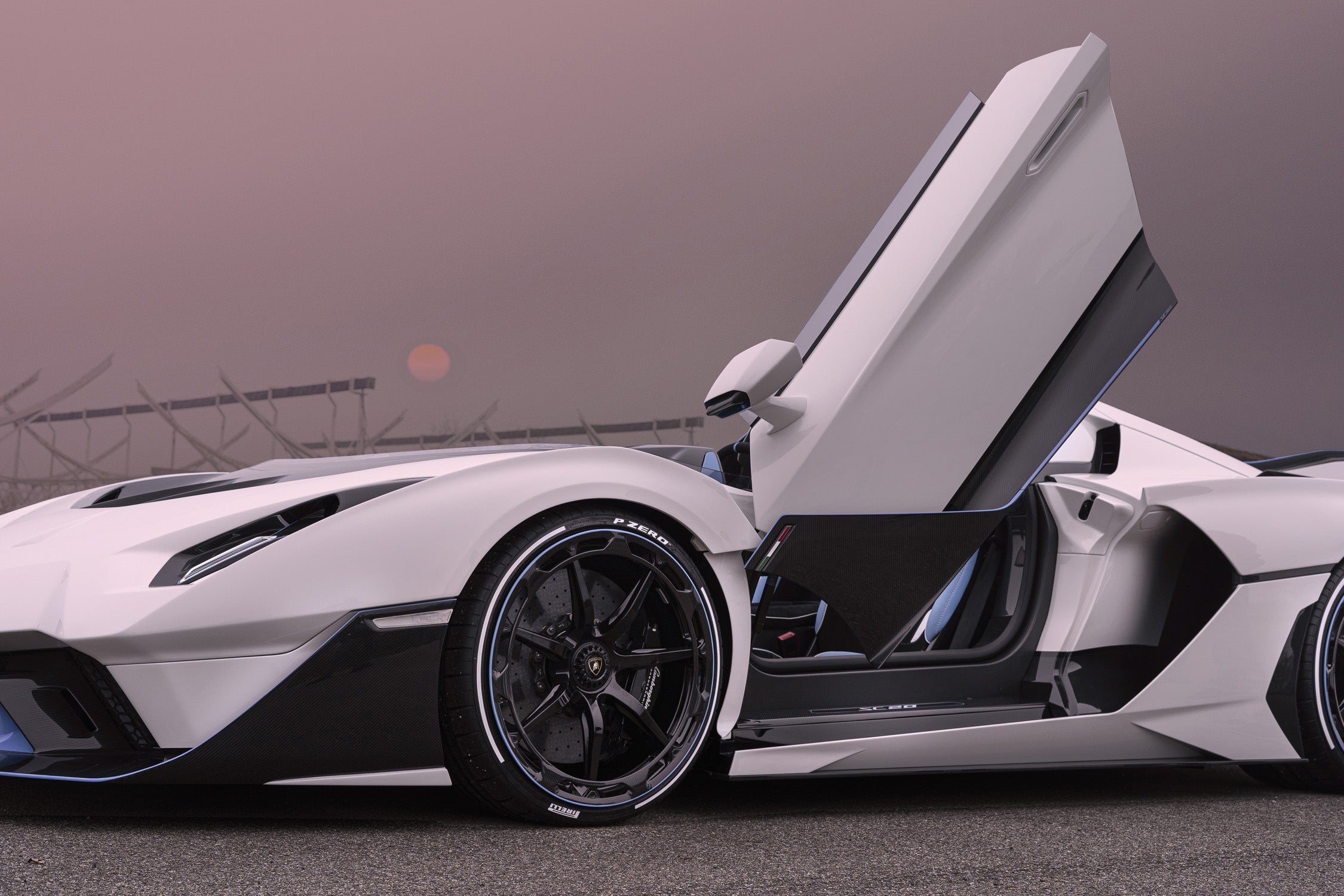 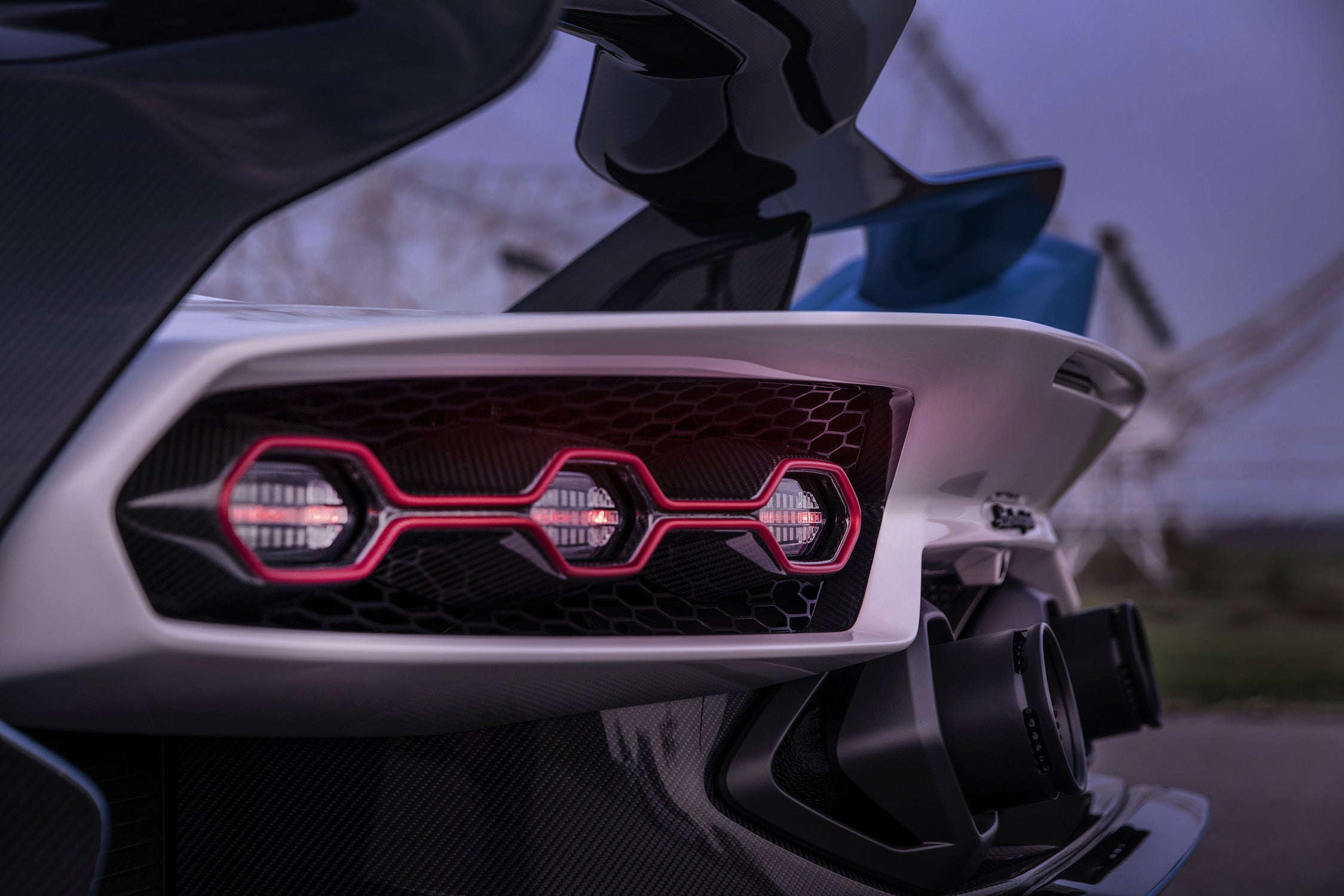 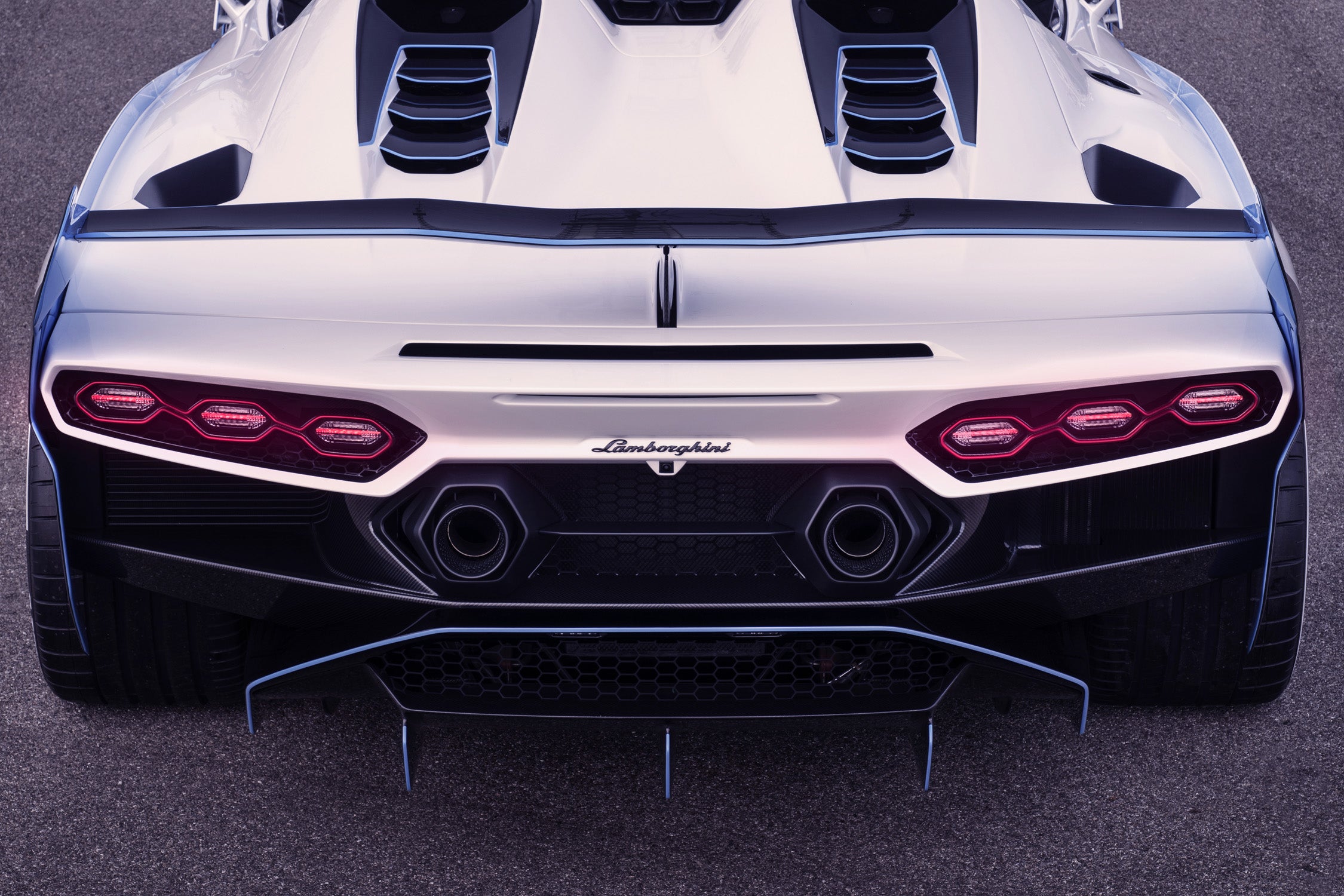 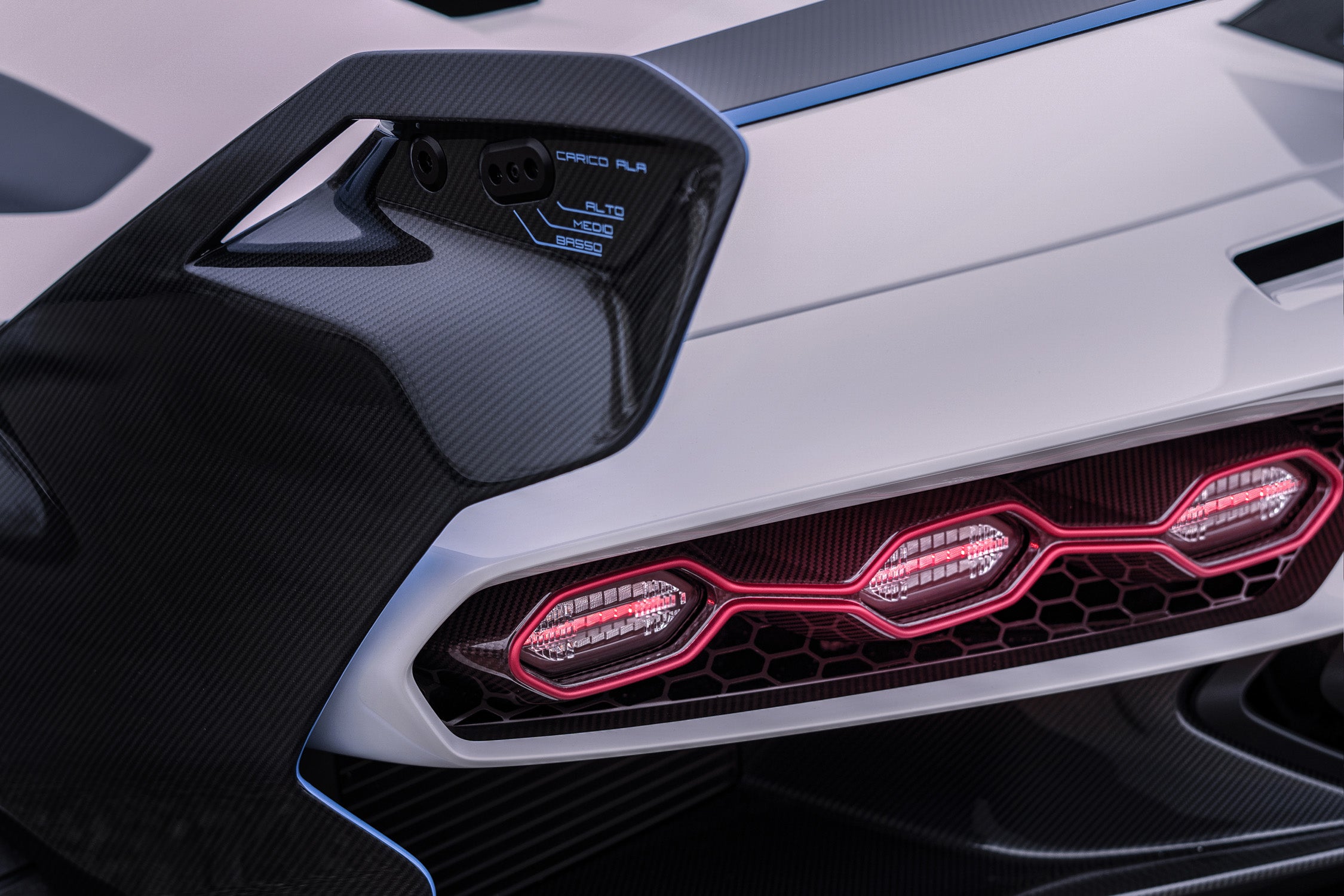 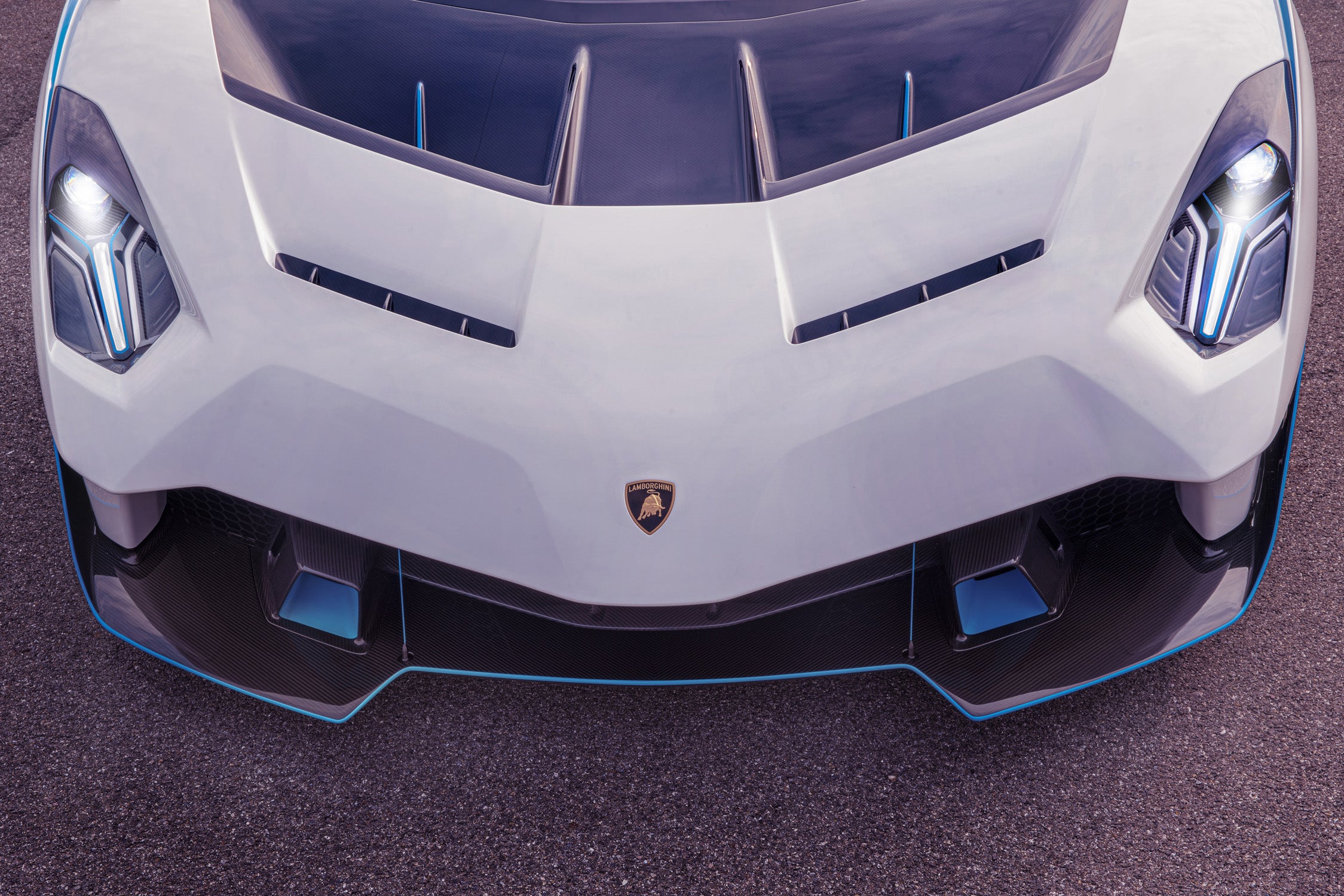 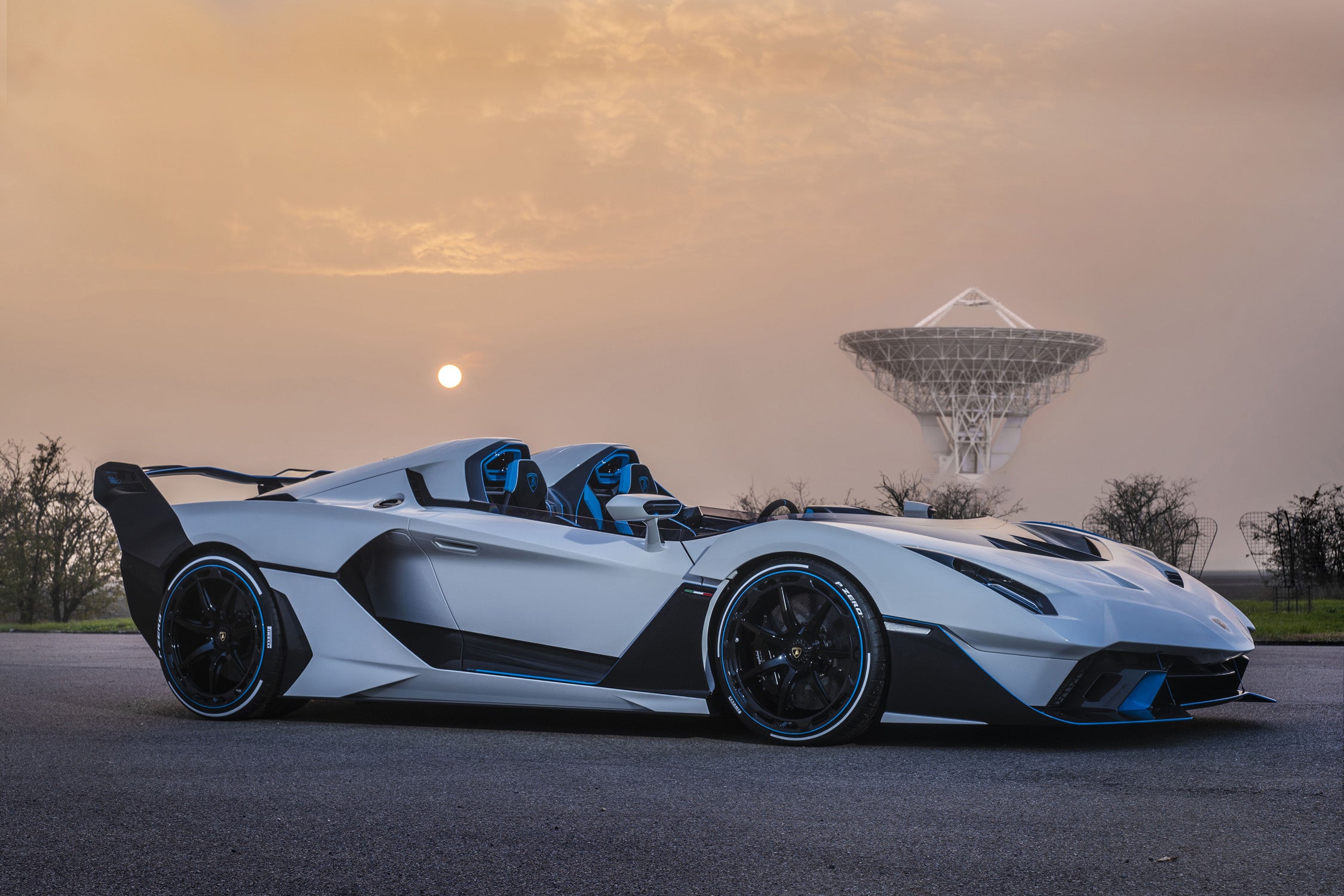 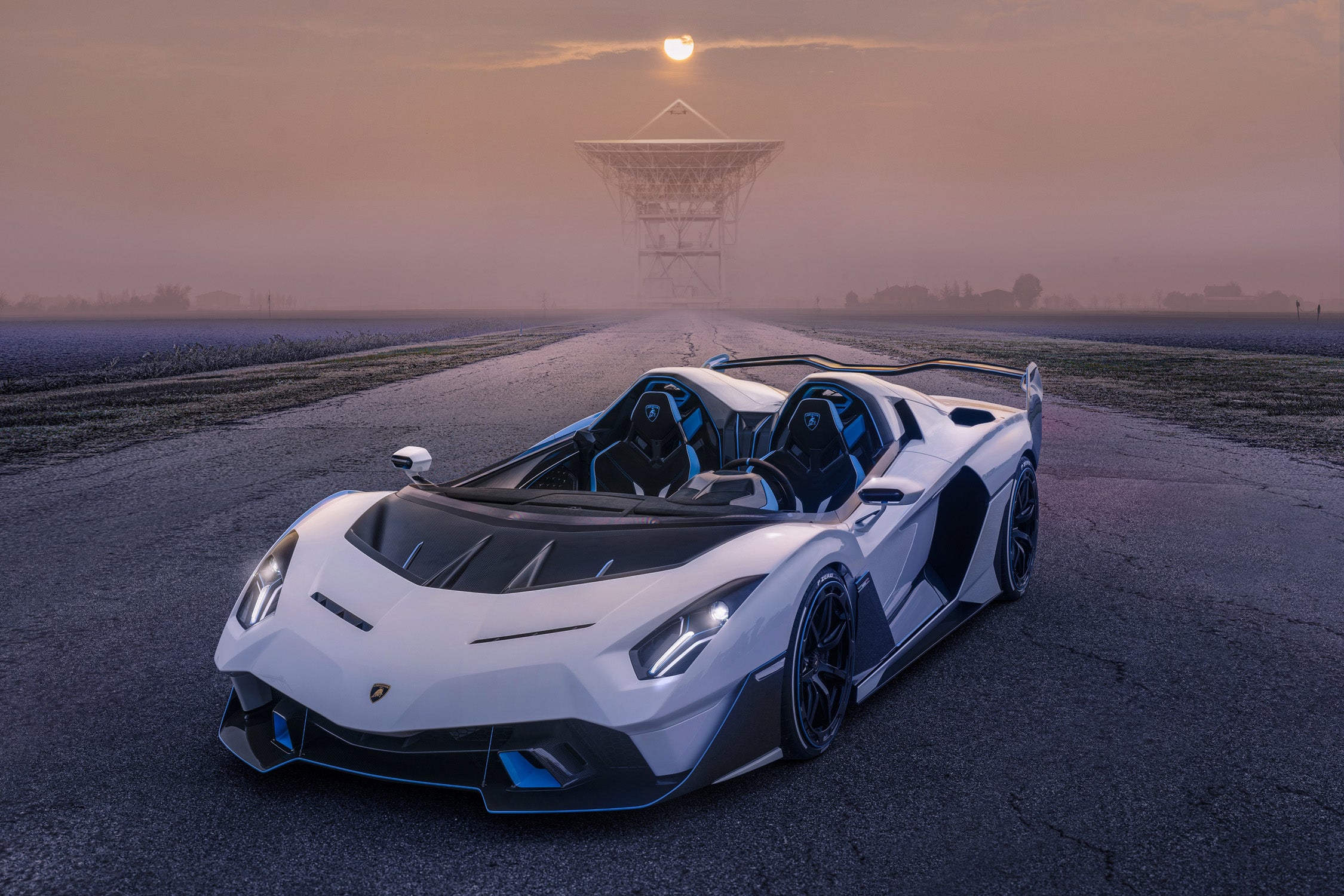 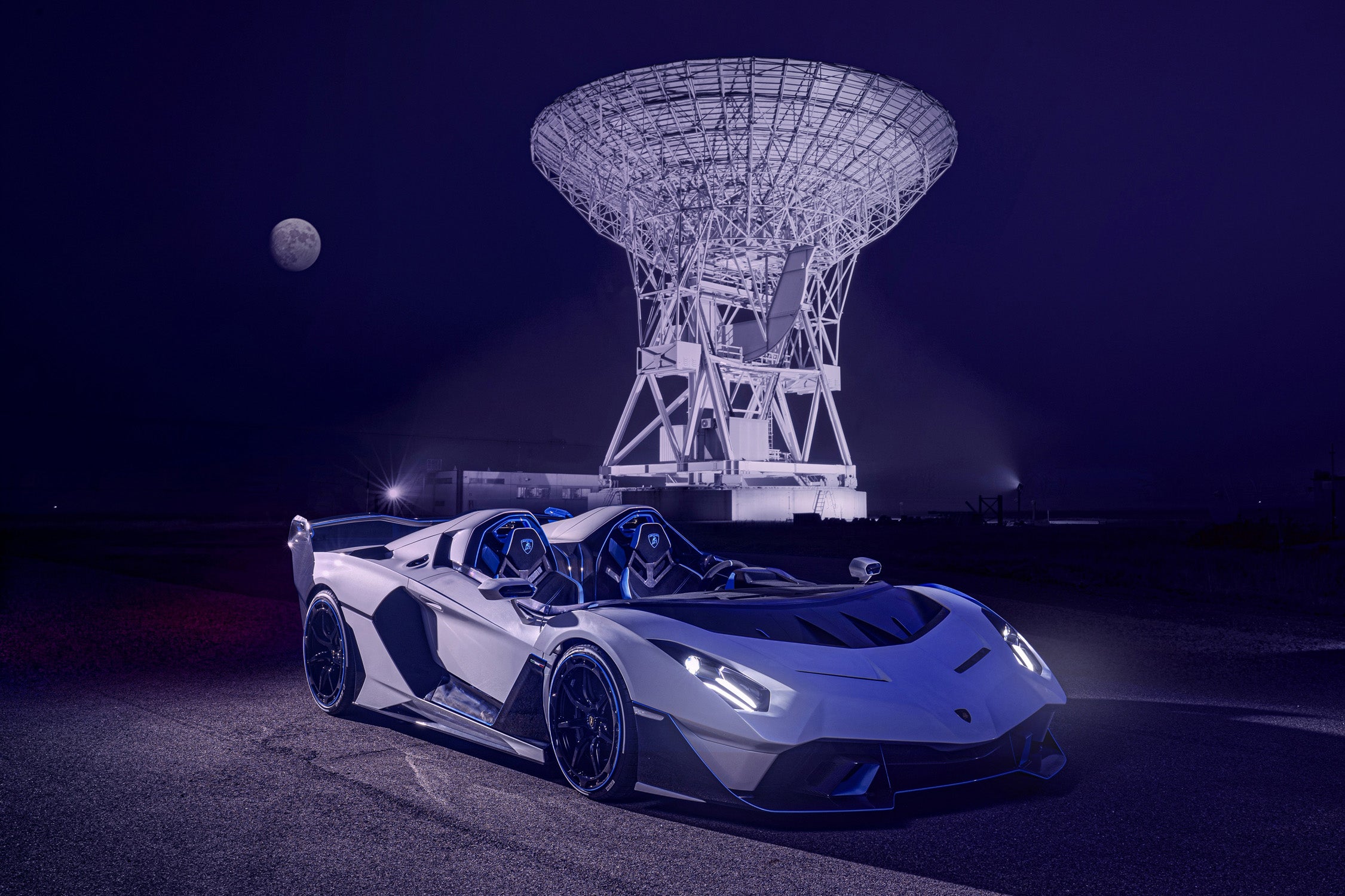 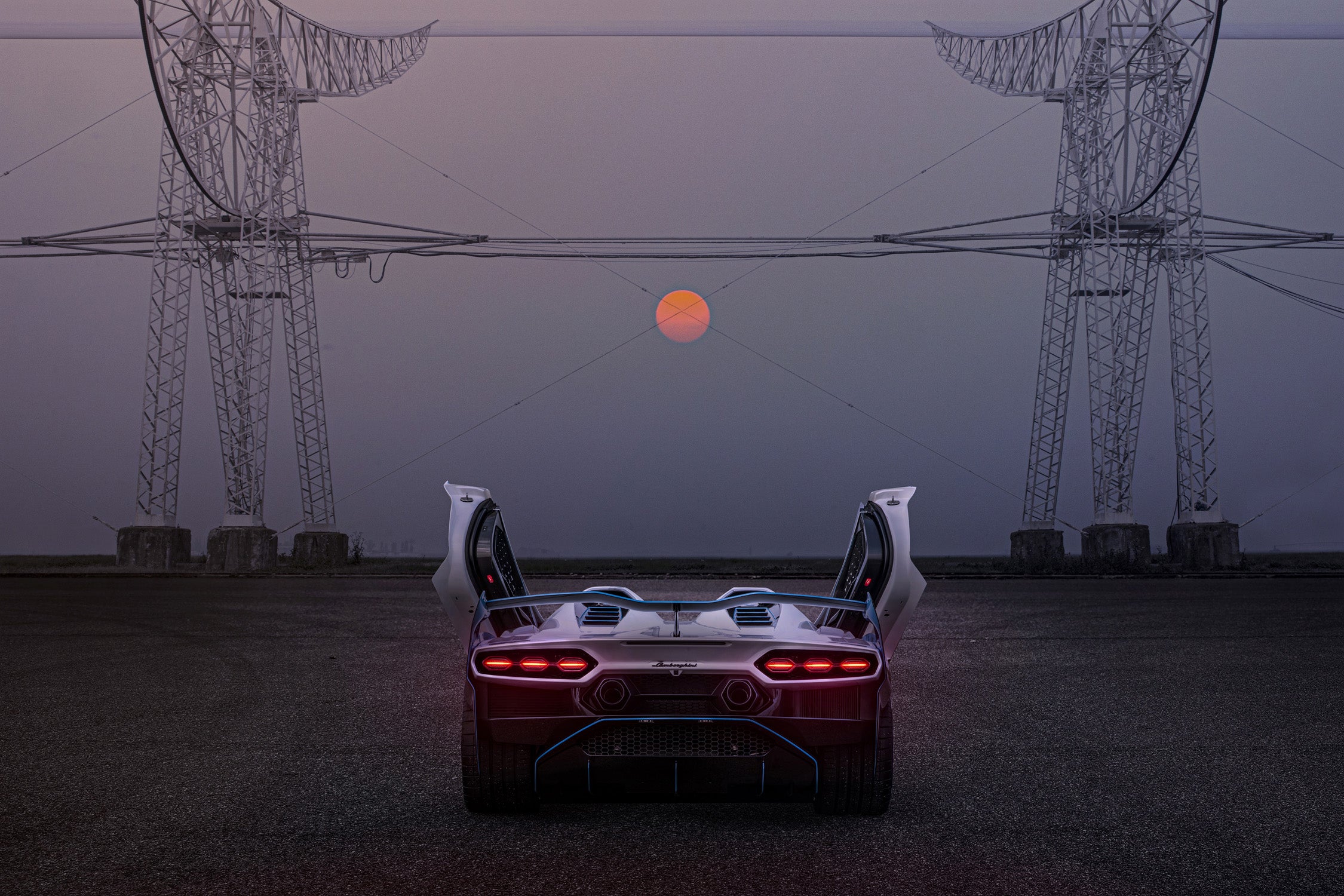 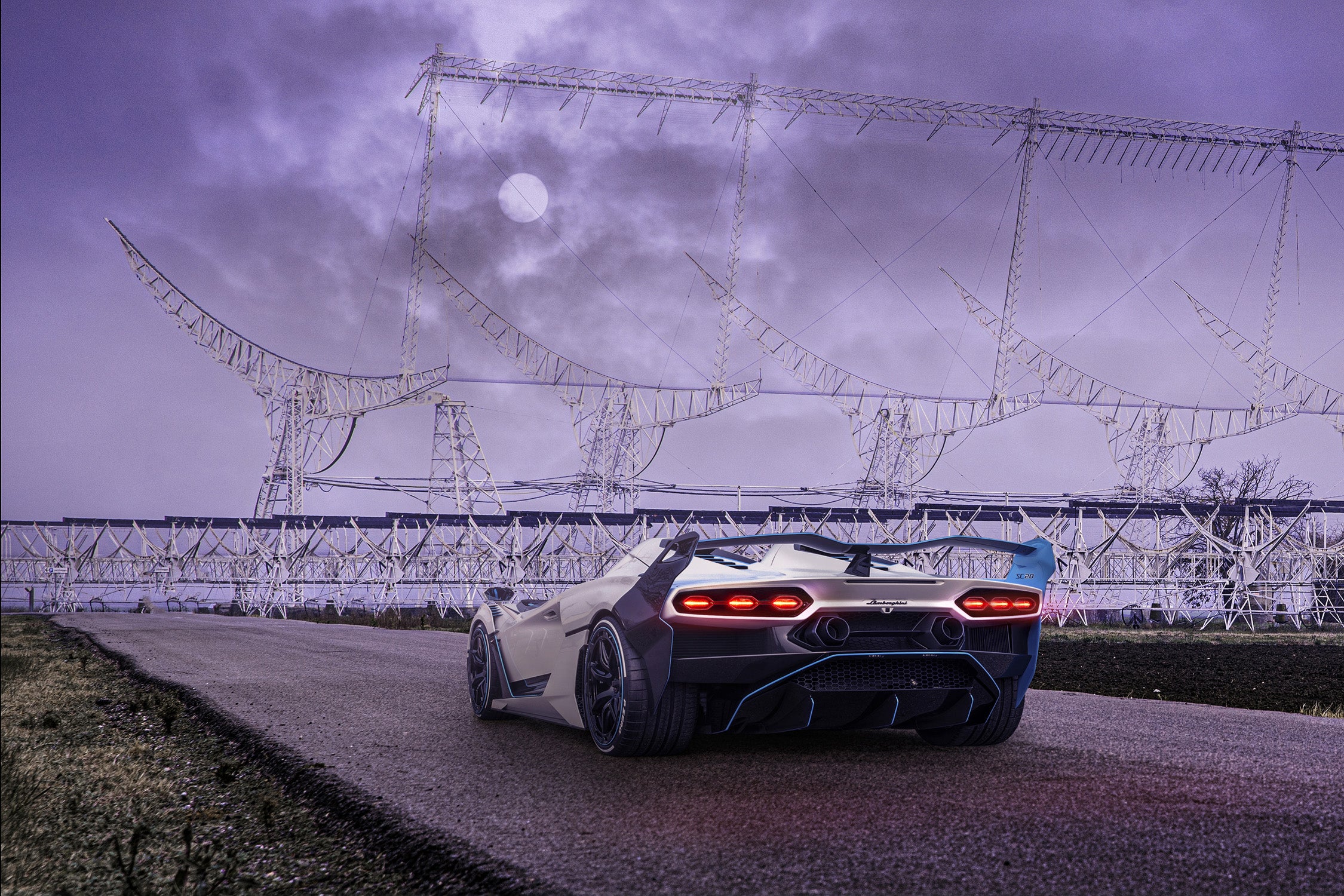 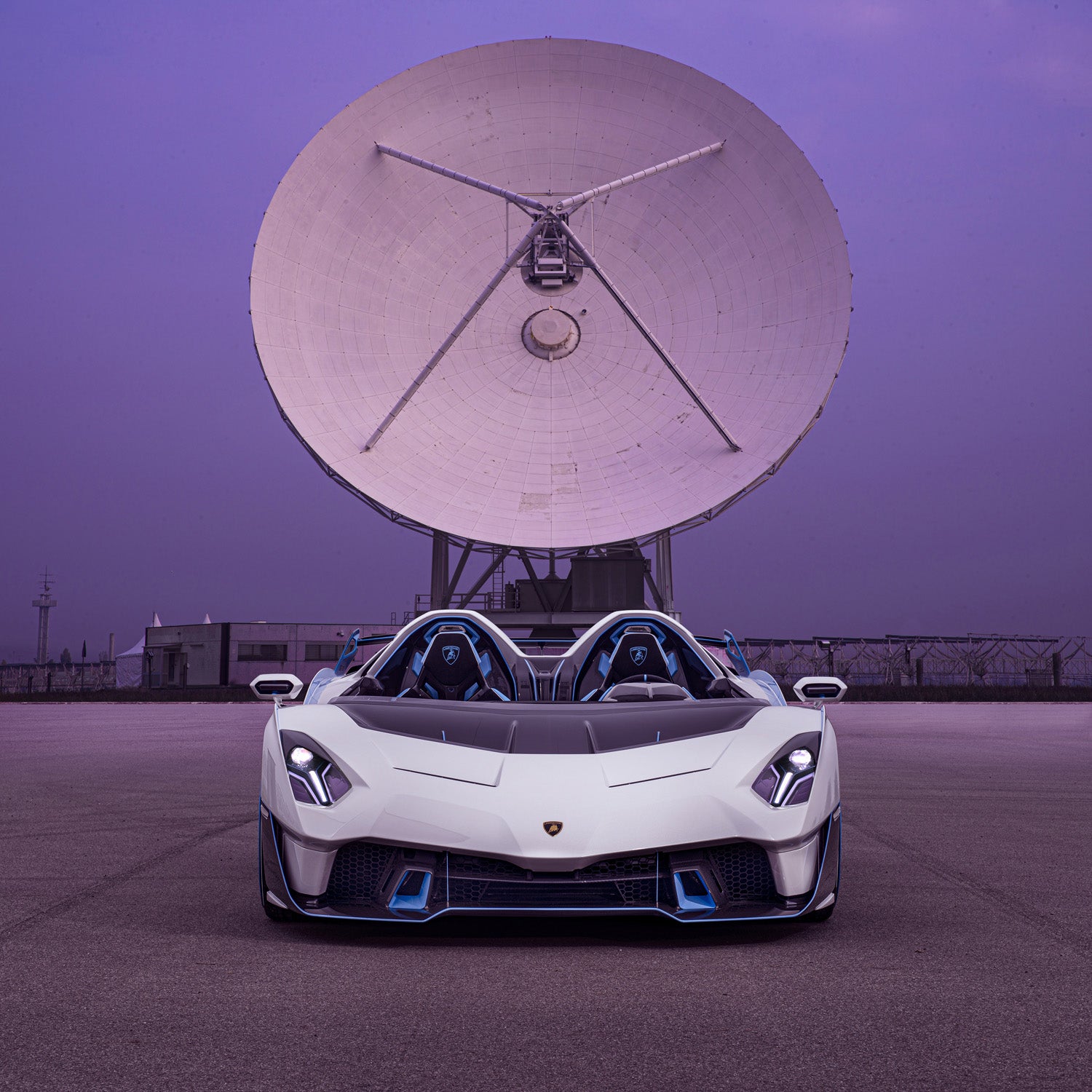 Got a tip on V12s, one-offs, or more? Send us a note: tips@thedrive.com