For her first race seven years ago, she chose one of the most dangerous rallies in the world and she's not stopping now. 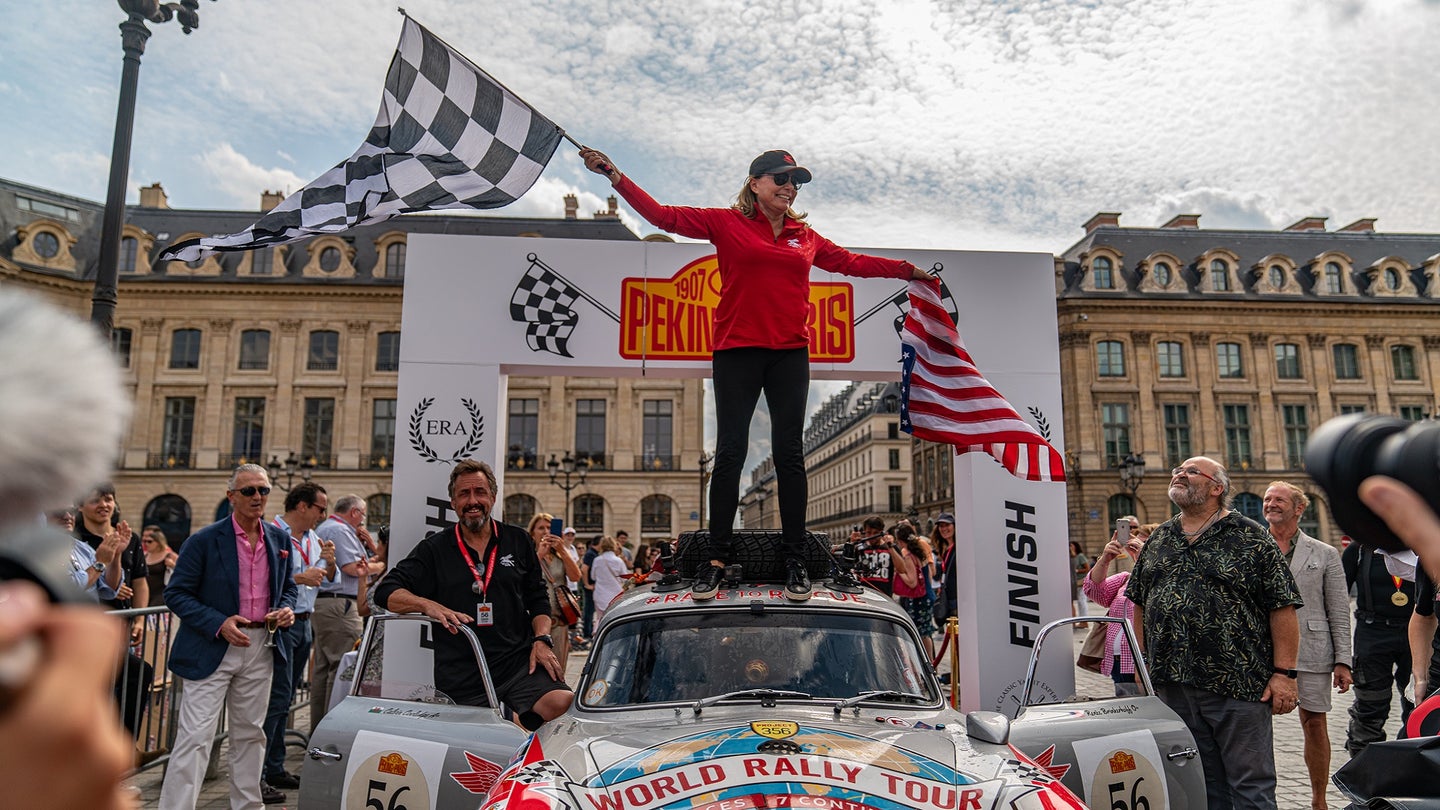 Racer, philanthropist, and founder of Valkyrie Racing Renee Brinkerhoff has been all over the world in her 1956 Porsche 356A. The extraordinary thing about Brinkerhoff’s story is that she was born in 1956, the same year as her Porsche, and she only started racing nine years ago with no experience before that. How many people start a new career—let alone a risky, globe-trotting one—when they’re in their mid-fifties? More interestingly, Brinkerhoff didn’t want to race cars until then. In fact, she wasn’t very happy about it, she says, because she didn’t know much about cars.

Something urged her to do it anyway, and she figured one race would quell the urge. Brinkerhoff is nothing if not bold, and for her first race she chose La Carrera Panamericana in Mexico, which is called one of the most dangerous tarmac rally racing events in the world. She admits she didn’t know the full extent of what she was getting into.

“I heard about this race and thought not only would I get to check the box for racing, I’d get to have an adventure in Mexico,” Brinkerhoff told me. “I had no idea about the race riskiness or its history or anything, but I thought, ‘That just sounds awesome. Seven days in Mexico.’”

Awesome is one word one could use to describe it. Or, for some, terrifying: there was a fatality the first morning she started, and she says there's at least a 30 percent attrition rate due to crashes that render the car beyond repair for the race. Competitors are frequently medivaced out or headed to the hospital. It's a risky sport.

At this point, Brinkerhoff has driven her 356A over 20,000 miles. This Porsche is a purist’s vehicle; it’s a manual, of course, and it lacks any of what Brinkerhoff refers to as nanny features. There's nothing in that car to tell her what she’s done wrong and it doesn't monitor the driver like a modern car; it doesn't correct mistakes. What you put in is what you get out, Brinkerhoff says, so you really are the master of your own destiny in that car for better or for worse.

When Brinkerhoff started competing, she was looking for a name for her team when she landed on Valkyrie Racing. Valkyries are mythological women warriors of Norse mythology who left Valhalla to rescue wounded soldiers on the battlefield and restore them to life. It suits her and it also suits her car, which she breathed back into life after it spent its first 50 years touring comfortably.

Since that first race seven years ago, Brinkerhoff set the goal to tackle all seven continents, and she’s heading to Antarctica next. The rally was supposed to be last week, but due to the pandemic and travel restrictions in Chile, the logistics company that handles all the transporting and support for the expedition canceled their whole season and postponed to 2021.

In the meantime, Valkyrie Racing is finessing the Porsche and continuing to train. The car will be fitted with dual-sided, flexible solar panels across the front crevasse bar. The panels are designed to reflect the snow from below and the sun from above and provide extra energy needs; specifically, this will help to power up the load from the alternator. The crevasse bar itself will function as a third ski, of sorts.

Weight management is a challenge to keep the car at an ideal weight of 1,100- 1,200 kilos. Of course, the 356A was never designed for snow, so an engine brace and gearbox brace have been added to make the car safer and stronger. Because who wouldn't want to ski on a sportscar?

And so I climbed into the cab and then I settled down inside
He asked me if I'd seen a road with so much dust and sand
And I said, "Listen, I've traveled every road in this here land