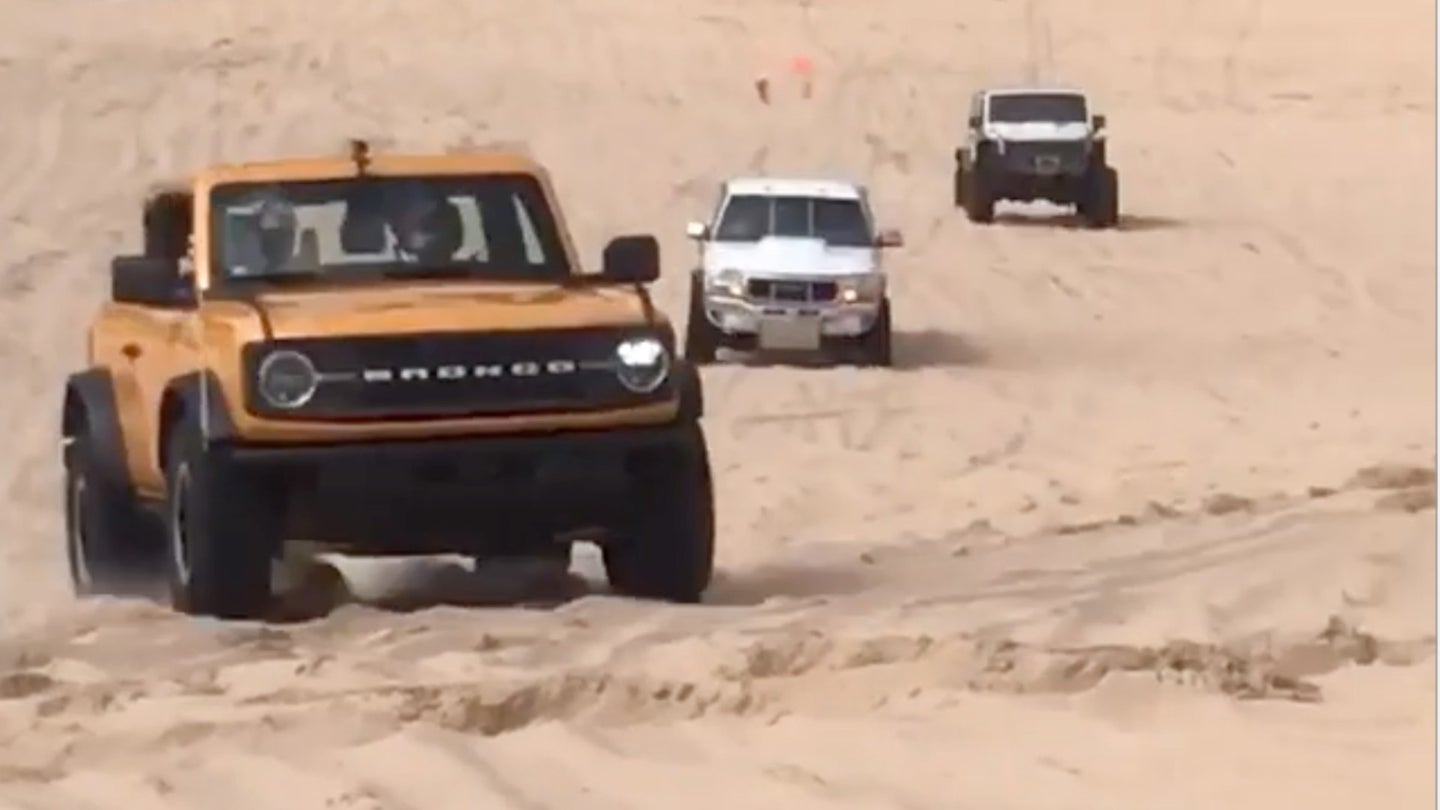 Hot off social media is some of the first no-BS 2021 Ford Bronco footage. Since the revived off-roader's reveal a few weeks back, we've only seen dolled-up press shoots of top-spec models in the desert at golden hour—cool, sure, but hardly realistic. These clips, along with a few previous posts to Facebook and Instagram, show actual Broncos doing actual Bronco things in a sea of Jeeps and other off-roaders.

These videos were posted on Instagram by Ford's North American Product Communications Manager, Mike Levine. They feature a new Cyber Orange Metallic Bronco enjoying a Sunday afternoon at the dunes amongst some angry-eyed Wranglers—make of that what you will.

The Bronco looks at home, charging over the dunes on a set of factory Goodyear 35-inch tires. It's difficult to distinguish the Bronco's exhaust note amongst wind noise and the roar of ATVs in the background, but if we had to guess, it's likely a 2.7-liter EcoBoost V6 model. It. at least looks the part and handles the dunes like a Husky in the snow.

There isn't a ton to go off from these videos, though it is at least a real glimpse of the Bronco in its element. In due time, these will be everywhere but for now, we'll take what we can get.

Who knows how long it'll be until we actually get to drive a Bronco for ourselves, so in the meantime, all we can do is watch the select few flog them through sand and mud. Ford's slated to begin deliveries for the sixth-generation model early next year, though some of the reserved Broncos supposedly won't come until 2022. That's a result of the massive demand the Blue Oval has faced for the open-top four-wheeler. Thousands of people created a cyber mob that crashed the servers taking reservations for the 2021 Ford Bronco upon its release and, last week, we reported that Ford had taken over 150,000 reservations for the truck in 18 days.

The demand is clearly here—it's simply a waiting game for the supply to arrive.

Rest Easy, RVers, the 2021 Ford Bronco Can Be Flat-Towed

Like the Jeep Wrangler, you can drag the Bronco on all fours without damaging its drivetrain.