What can you say about a car that has survived 25 years in Tallapoosa, Georgia? A small friendly little Southern town located somewhere between civilization and Deliverance. 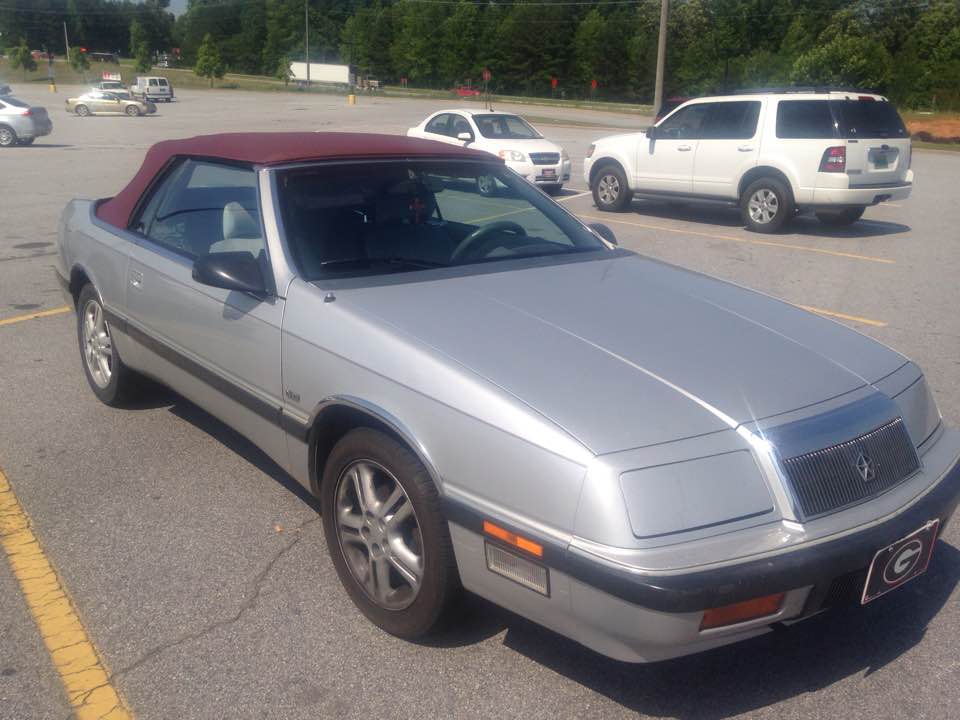 Those were the three most important people in Joanna Blackburn's life. Joey, as she was known around the greater Tallapoosa community, was a pharmacist at the local Walmart and had become a local legend for her love of good folks and great conversation.

Her job was pretty simple on the surface. Don't steal the pills. Don't show up to work drunk as a skunk. Be friendly, especially to the older folks, and focus on the immediate task at hand. Tallapoosa was a place where roots grew deep, You were not only expected to be conversational, but genuinely friendly to your people, which meant all the people.

Joanna wasn't much of a churchgoer, but she loved the people. One day right around 2002, an 85-year-old gentleman who had been coming to see Joanna since day one gave her a very special something, and all it took was a daily quick conversation as a show of genuine kindness and a check for $2000.

It was a 10 year old Chrysler Lebaron convertible with only 42,000 miles on it. The last of the LeBarons came with all the basic niceties you would expect on a 1990s ride. Cruise control. Anti-lock brakes. A 3.0 Liter V6 engine. Even alloy wheels and a premium sound system were included in this rolling piece of Americana.

Today a lot of people who have never owned a LeBaron would call it a turd, and they would be as wrong as they are inexperienced. The 1994 Chrysler LeBaron was a cruiser in every sense of the term, and cruise it did as Joanna took the long and winding roads of state 120 and coasted to a back parking space where no one could dent her ride.

At first, Joanna was planning on having it as a summer ride. But summer turned to autumn, and the leaves seemed to dance around the LeBaron as she drove it to and fro every single day. There was a 1985 Toyota Camry still molderizing in the garage. But Joanna just loved having the freedom of that open top, and Georgia's temperate weather made it easy for her to keep her LeBaron as her one and only "Happy weather ride!"

As the years went by the LeBaron started showing a few of its cost cutting roots.   When the cloth seats sagged, Joanna put a couple of small pillows she found at a local yard sale. When the seats tore up again, she found covers with flowers on them for fifteen bucks at Walmart. Joanna just rolled with it for a while. But then the local junkyard got in a nicer set that they installed for two hundred bucks along with a new set of alloy wheels Five years later, she was back to putting pillows on those seats.

When the dashboard cracked along the driver side she ignored it. But as dispensation for her automotive sin, she did put up a wooden cross on the rear view mirror and gave the LeBaron a brand new top.

Miraculously the cracking stopped and to this day Joanna credits the cross and Dolly Parton's Greatest Hits for the heavenly intervention.

The LeBaron is so far showing 292,865 miles of eternal salvation, and it's a gem. Engine. Transmission. Even the cassette tape deck that has more Dolly Parton music than even Dolly can stand. It is what America was.

Joanna ain't sellin' it anytime soon.  She knows that sometimes the cars worth keeping are those that only a real owner can admire for its inner beauty.