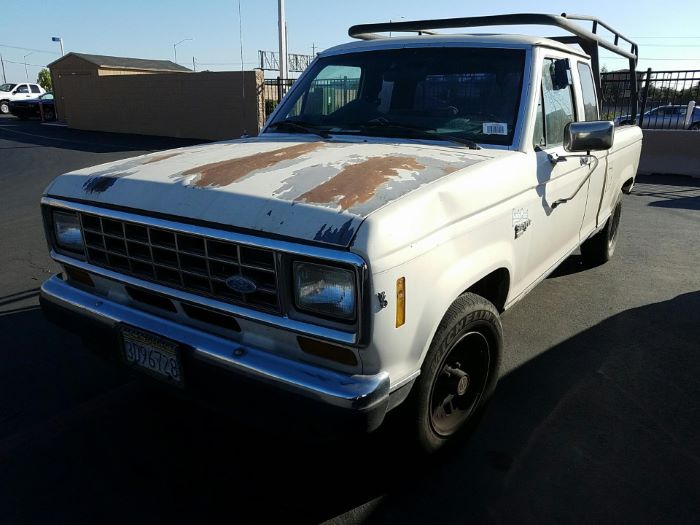 "Damn! What did they do to this thing?"

It was 2005 and Matt Summers was looking through all the repos at the local title pawn. For those of you who don't quite know what a title pawn is, imagine if you could borrow $500 at an interest rate of 25% a month in exchange for a lien on your vehicle.

That's what a title pawn is..., and that's why Matt, owner of Salvage Hunters Auto Parts, was busy looking at a bunch of cars and trucks that were as rough as an old wore out mop.

"What do you have in this thing?" Matt had ignored the 1992 SAAB 900 with the moldy barf stains and was fixated on an old 1986 Ford Ranger that had more primer than paint.

"Oh, about $300 altogether." Matt heard the shrill voice of a grossly obese manager at Titlemax by the name of Kayla. When Kayla wasn't busy making deals on the side that put money in her pocket, she was laundering cars that would be sold on the cheap to friends and associates.

Lucky for Matt, he was both.

"Deal!" Kayla smiled because she knew that $50 would soon be in her pocket and nobody would miss the $50 Ford Ranger when it came time for Titlemax's auditors to look up its final disposition price. Junk is junk, and a car that was worth more to the junkyard man than the average Joe could be sold on the cheap without anyone knowing the difference.

Matt arranged for three more 50/50 deals. A 1993 Chrysler Town & Country with a good motor. A 1994 Buick Century that had a minor wreck in the front from due to a DUI, and a 1996 Plymouth Neon with a bad clutch and ripped out wires where the factory radio once had been. Each was easily a $500 profit to Pat. Over time parts would be removed, mailed off, or driven to Salvage Hunters thousands of retail customers. He ran a lean ship with cheap parts cars that would be at his place for no more than a year before the remnants were crushed and recycled into whatever the Chinese needed for raw materials.

But this Ranger was going to travel a different road.

For parts, Salvage Hunter had a fleet of Rangers. Everyone loved these old things back in the 2000s, but they hadn't gone through the inflated prices that nostalgia tends to inflict on certain emerging classics. Pat simply had one of his employees give the Ranger a tune-up, replace a couple of wheel hub bearings, and install a leftover ladder rack that had been on another junked ranger.

And that was that. Matt now had the perfect delivery vehicle. "Everything on this truck is Amish!" -  Pat thought to himself. No A/C. No radio. No power steering. No power windows. Heck, it could have been driven by Fred Flintstone if you could ever find an employee with strong enough feet.  It was as base as an old truck should be and the ancient 4-banger in it offered a soulful 'clickety-clack!' as the truck was used to drop off engines, transmissions, doors, and a long list of suspension and body parts throughout the Deliverance country of North Georgia.

It did the job. For eight... long... years.  Parts were always available for the taking while the truck offered all the giving that a rust-free 20-plus year old hauler could offer for a successful small junkyard.

When the Ranger rolled over its five-digit odometer for the fourth time, it was late-2015 and old 1980s Ranger parts were no longer in high-demand as they once were. The truck was flat wore out and so Matt, being Matt, decided to give the truck one last ride.

"Let's send it to Carmax and see what they'll offer for it!"

The answer? Two hundred fifty bucks. It wasn't good money. About half of what it was worth. But Matt didn't want that truck to be sold to one of his employees or worse yet, one of his employee's friends or family members. Matt flipped the title,  took the check, and drove off later that day to Titlemax, where he found a 1996 Ford Ranger that had been as dented up as an old Coke can at a middle-school playground.

There was Kayla, who, now in her 40s had a striking resemblance to a blonde Jabba the Hutt. Matt smiled, gave her a wink, and asked her the one question that always had one answer.