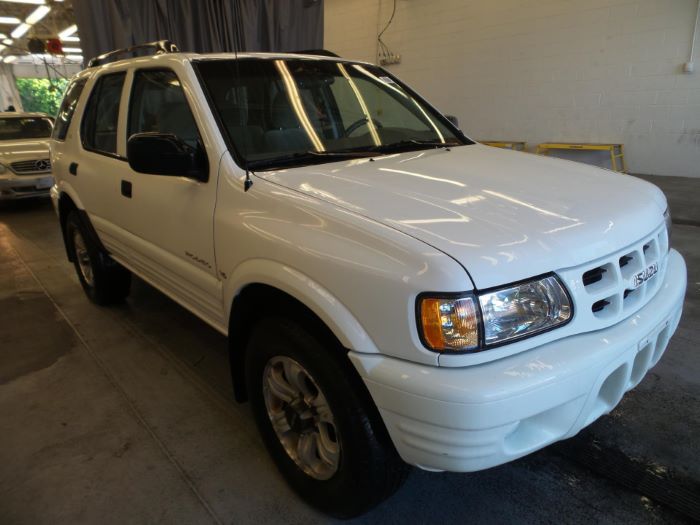 "Who the hell is going to buy that thing?"

It was the fall of 2001 and Sam McKnight was sweating bullets. His manager at the local Isuzu dealership was trying to rally the troops by giving them a nasty dope slap, and it sure as hell wasn't working.

"I told you retards to sell, not pick your own asses! Why the hell do we have 32 more Rodeos on our lot than we did 60 days ago?"

The answer was as simple as his bosses lecture was dumb. The dealership was run by a lying cheapskate who never did any local advertising that was ever worth a flip. His name was Joe, and he walked around the dealership at odd hours looking like this.

Joe Isuzu, the owner of Honest Isuzu, was renowned for promising people the moon while giving them the proverbial bird. Sam had been promised at least three bonuses that year and not a single one of them had materialized. By now his IOU amount was well over $3000 and Sam didn't believe he would ever see a nickel of it.

"We have to sell these vehicles damn it! Look at that sad little Rodeo over there. It had been sitting for a year now because you prancing Neanderthals can't figure out how to sell a four-wheel-drive stick!"

Sam thought to himself, "Yeah, we're in the middle of central Florida in the smack middle of traffic central and they want me to see THAT!" If only Sam had bothered to apply for that sales job at Lexus of West Palm Beach instead of this rinky-dinky Mickey Mouse outfit, he wouldn't be stuck listening to this hormonally imbalanced baboon of a boss tell him how to sell cars. Sam began to doodle on his notebook when he heard the words that would forever change his life.

"Sam! I need to talk to you! Everyone else dismissed!"

Sam gave off a big sigh and moved up to meet his boss, Mr. Baboon.

"Sam, if you don't sell at least five more this month, I'm firing you."

"What? I'm the top producer here."

"Yep, six sold in twenty days. You should be damn proud of yourself Sam. You're a star! But guess what. The boss believes you should be selling twice as many and we're not seeing you do that."

"Maybe if he paid me my bonus like he promised, I would be more motivated."

"And maybe you'll see that bonus if you meet your quota."

Sam knew there was no use talking to the guy, and Sam also knew there was no way in God's green Earth he would ever see that bonus money.  So he decided to go out drinking and that's when the light bulb in his head went from a dim of misery to a neon of hope.

He knew a guy. Dave Mattingly owned a store on the beach that sold everything from temporary tattoos to fake IDs. They played poker every Sunday evening, and Dave was the type of guy who loved to be part of any minor case of trouble that would be entertaining.

"What I want you to do is be me. Go to the dealership and drive a creme colored Isuzu Rodeo with a 5-speed"

"Look, they haven't touched this thing for nearly two years. I want you to create a fake ID that has my information on it, and go there to drive the car."

"I sure as hell do. Take a look." It was there that Sam pulled out his bank statement which showed well over $30,000 in savings. Sam may not have been rich. But he had one big fat pillow of a savings account thanks to his lack of family or vice.

"Use my name and address on the fake ID and I'll take care of the rest."

The next Saturday was known as the 'end-end' of June. End of the month and end of the quarter. In dealership speak this was the time when most quarterly bonuses get handed out to everyone from the General Manager right down to the grunts who do all the heavy lifting at the dealership. Technicians, parts advisers, and even new and used sales associates.

Everyone needed their money, but there was a problem. Joe Isuzu was cooking the books. It was a strange compulsion. The worse the dealership performed, the more Joe took off the top. That meant that this quarter the only thing most of his employees were paper IOUs and empty bucks. These papers had become so entwined to the daily financials of the dealerships that they were called, "Joe Bucks."

"Folks, I'm sorry but our cash flow is pretty tight. I'm giving everyone an extra 5% if they wait until next week to get their bonus checks. "

What could anyone do? Sit, wait, cuss, pray and twiddle their thumbs. Everyone did that.... except Sam.

When Dave walked into the building, he went straight to Sam and said, "I'm buying a Rodeo before the end of the day. What can you do for me?"

"It can be anything as long as it's dirt cheap and the title says my name on it." The General Manager overheard Dave, and motioned Sam over for a quick briefing as Dave walked outside to look at the creme colored Rodeo.

"Care to put it in writing right next to this IOU?"

"Are you kidding me?"

The General Manager paused, grumbled under his breath and signed off on a $2000 promise if the 5-speed Rodeo got sold.

It was 8:00 P.M. and Sam along with Dave needed some time to kill. So they went off to the nearby Palm Beach Mall and people watched before heading back to the dealership at 8:45.

"Where the hell have you been? We need to get this vehicle sold."

"This guy went through everything on that vehicle. I have never seen anyone be more thorough with a vehicle in my life. He's saying that his absolute flat bottom dollar is thirteen five out the door."

"He won't budge and he already has one foot out the door."

Sam knew in his gut there would be no next month. Not even a next week.

The paperwork was drafted in the name of Sam McKnight with an address that belonged to his parents. Once same had the paperwork he went to the copy machine and made a copy of the $3,000 IOU along with the $2,000 bonus. He then wrote a check for $8500, replaced the copy of the Fake ID with his own, and escorted his friend to his new ride with title in hand.

The next Monday at noon he got the call.

"We're calling the police and having your ass arrested." - said Joe Isuzu

"Then you better have one hell of a good lawyer because what you have a copy of is a legal and binding document."

... and sure enough, it was. Joe had no shortage of former employees who had sued him in small claims court for those IOUs and won in the past. He knew he wasn't getting that SUV back. But why not bluff a little.

"I have Detective Clancy over here and he wants to...

Sam may not have ever seen his bonus, but he got one hell of a good ride. 17 years and 392,184 miles later, Sam works at the Parks and Recreation Department in Pawnee, Indiana and Joe Isuzu has nothing to show for his deviousness other than a bunch of Youtube commercials.