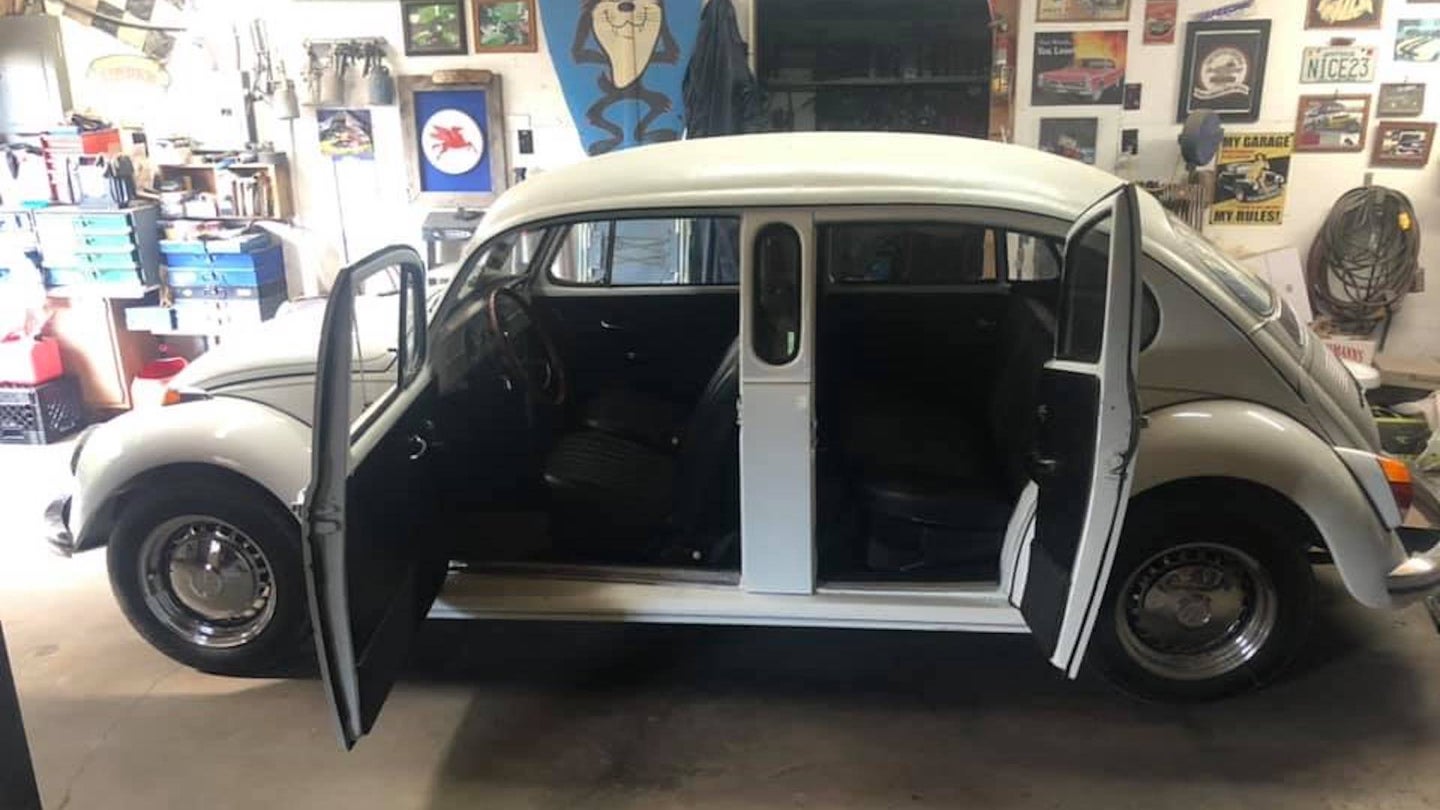 There aren't many cars whose silhouettes are more recognizable than that of the Volkswagen Type 1, more popuarly known as the Beetle. In addition to being obviously insectoid, its cab-rearward body was—as best scientists could tell in the 1930s—hella aerodynamic, not to mention surprisingly spacious given its proportions. But with only two doors, the Beetle's back seat wasn't what you'd call accessible, though someone has addressed that problem by creating the four-door "limo" Beetle you see here.

This 1965 Beetle appears to have been cut in half crosswise just ahead of the factory B-pillar, and had a couple feet of extra sheet metal (plus a new, structural B-pillar) added in to lengthen its wheelbase. Unlike the last stretched Beetle we fawned over, this example is no three-rower. Its extra length only goes toward adding legroom to the second row, which is admittedly on the cozy side from the factory.

Now, there shouldn't be any issue shoehorning an additional 10 clowns into the backseat over stock.

Whoever it was that centipeded this Beetle didn't limit their attention to its body, as according to its Facebook Marketplace seller, it has a fresh front end, interior, and air-cooled, flat-four engine. If said motor matches the original 1965 displacement and hasn't been swapped for a later, larger flat-four, it'd be a 1,200 cc unit, one which appears to have been modified with separate intakes and carburetors for each bank of cylinders. Its exhausts are similarly separate, with a pipe exiting at each side of the rear bumper.

Unlike the body and exhaust, which err on the side of outrageous, this Beetle sedan's asking price is a relatively sane $7,500. A quick search for other Type 1s online reveals that in running condition, their selling prices range anywhere from about $4,000 to in the 20s, placing this example nicely in the "affordable" category. If you don't have that kind of cash, the seller says they're also interested in trading for a rat rod, though it speaks volumes about their imagination that they haven't considered turning this unusual Volkswagen into such a vehicle, as so many Beetle builders have done prior.

The 2021 VW Arteon Is So Much Cooler in Europe

Shooting brakes and a high-performance R trim—Europe’s holding out on us.