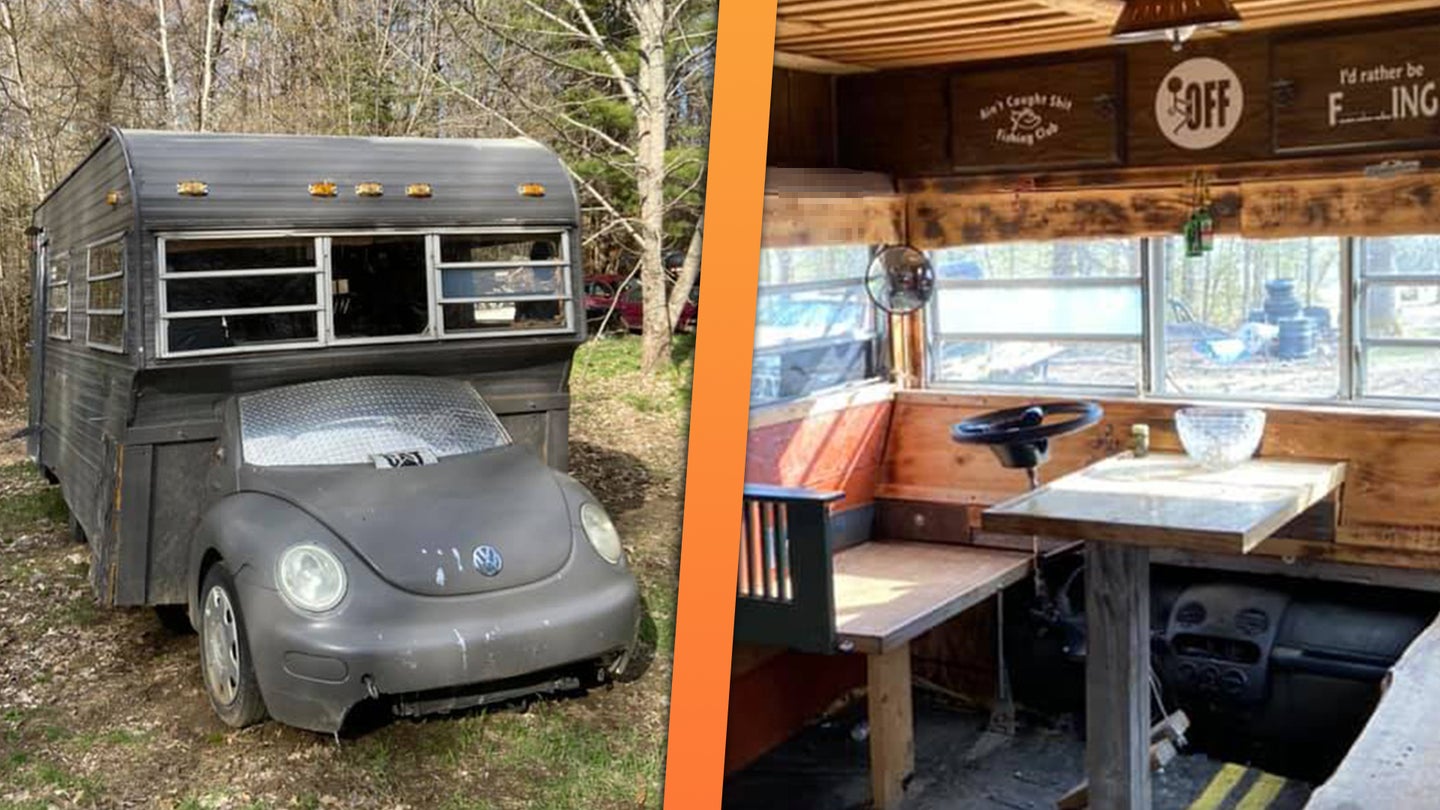 Whether you're a bike-riding backpacker or a truck-loving overlander, there's something about connecting with nature that makes everyone love a good camping trip. Now, you can bridge those two kinds of camping experiences by treating yourself to a staycation in this Volkswagen Bettle camper currently for sale on Facebook Marketplace.

Now, hear me out. We know that a 2003 Volkswagen New Beetle typically isn't an automobile commonly described as roomy or outdoorsy, but that's because the original engineers didn't think to cut it in half and weld it to a travel trailer for outdoor adventures like fishing, hunting, and obviously camping. Duh.

These two unlikely matches were welded together by owner Dylan Huff and a group of friends, who shared the common goal of making something...unique. Huff explained to The Drive that the camper was the result of an off-the-wall idea to build something that acted as a social-gathering mechanism that could also haul people around while fishing or hanging out.

"We don’t wanna be normal!" said Huff. "We wanted to stand out, and if the fish weren’t biting we wanted to be able to drive to the next fishing hole."

According to the Huff, this mashup is completely drivable from the inside, and not from where you might think. At first glance, you'll immediately notice the diamond plate metal windshield. Unless you have X-Ray vision, you probably won't be seeing through that. Instead, the steering wheel and pedals were moved into the trailer.

Poking out of the floor is the Beetle's dashboard, which we assume was left over to hide the nest of factory wires and electronics from the donor car. The steering wheel is then offset into an upright position, and the driver is located sideways to reach two wooden pedals for the brake and gas. The sideways orientation was chosen so that the driver would face the small picnic table, meaning they won't have to turn their body away from guests when moving the camper.

Although not explicitly stated, something tells us that this camper isn't road legal. The sideways driving position, lack of safety features, and questionable visibility are just three of virtually limitless indicators that this build isn't up to snuff on the Maine motor vehicle code, not that we'd want to pilot a wooden box down the road Top Gear style anyway.

The owner currently has the project listed for sale for a mere $600—a steal to some who are skilled enough to replace the Beetle's lifeless 2.0-liter four-cylinder engine and desire the world's most unique wannabe-RV.

When a beat-up old truck with a pop-up tent simply isn’t enough.

With worthy off-road chops and room to sleep two, you could disappear for days in this purpose-built rig.