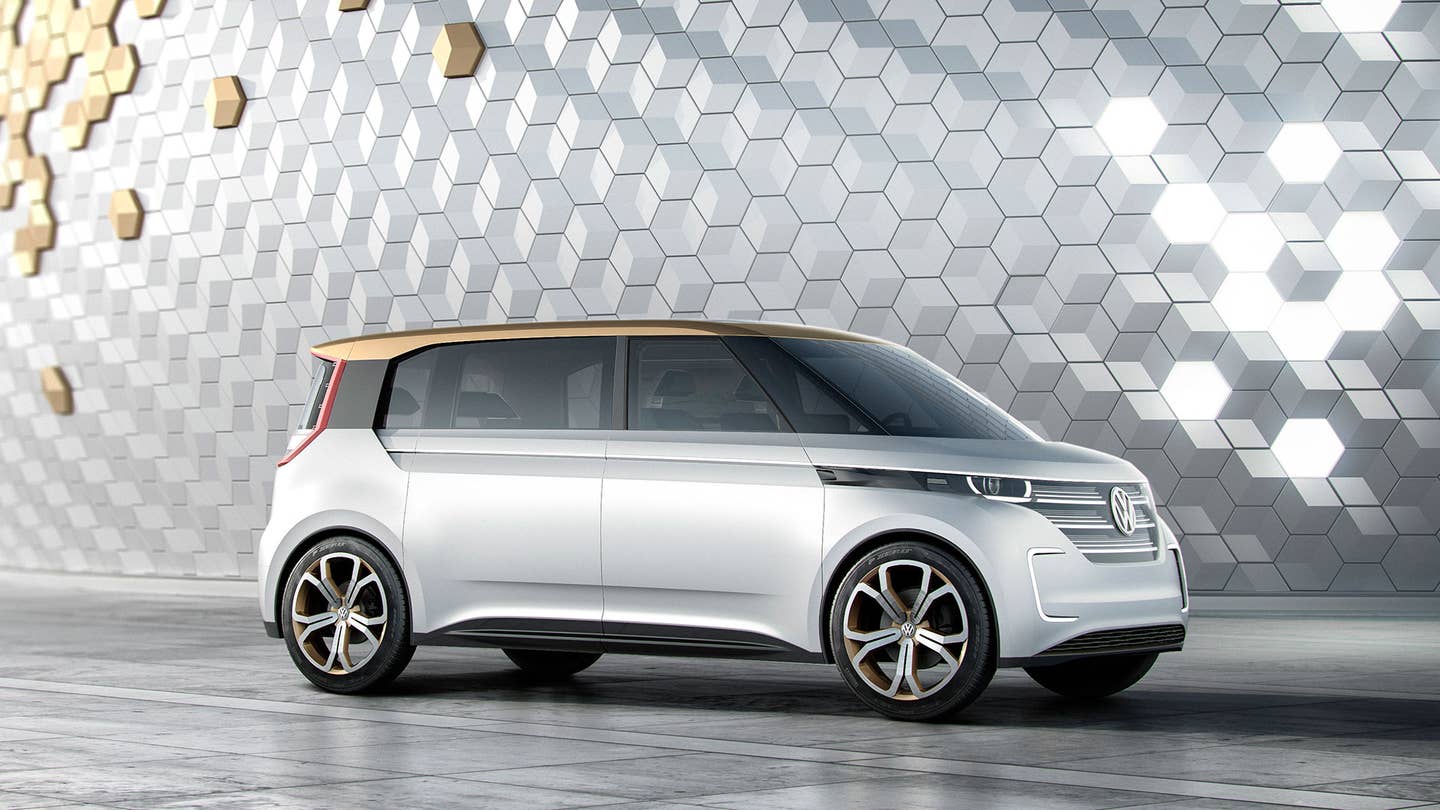 Almost nothing Volkswagen can say these days will eliminate the ick of #dieselgate. However, thinking back to an era when the interlocking V and W was essentially a hippie’s dream of peace and happiness—and climate change would be a mere gleam in the eye of surfer dudes, passed onto their children—is a supersmart play. That’s why the Volkswagen Budd-E Concept was brought to CES. Granted, what VW really showed is both a car promised, vaguely, for delivery sometime before 2020, and more importantly a platform called Modular Electric Toolkit (MEB), another mix ‘n match vehicle-architecture scheme to join MQB (Golf) and MLB (Audi mid-size sedans and Porsche Macan).

What matters, however, is that when Volkswagen showed a digital cutaway, the Budd-E had both front and rear electric motors and all of the batteries in the floor. The Budd-E itself isn’t huge, either, scaling as roughly 3/4 of a Honda Odyssey, which makes sense if you study the fat heart of what Volkswagen sells today: sedans, hatches, compact SUVs and the like.

As for specs, VW promises a stout 101-kWh battery with 373 miles per charge. For comparison, Tesla’s Model S tops out at 90 kWh of capacity. VW also say it could achieve an 80-percent recharge in only 15 minutes. Top speed is pegged at 93 mph—which, I’d grant, is considerably faster than a 40hp Microbus, circa-1960. And if it can chase down 60 mph in 10 seconds or so, which is a fair bet, it’d be about three times fleeter than those 30-year-old Syncros still rolling around the American Southwest.

What was actually on display, and demonstrated, were futuristic controls. You can talk to Budd-E and, because it recognizes the driver even from the outside (presumably by the signal from a phone or wearable device), it will open the doors. As such, the show car has no door handles. And, ta-da, as carmakers love to keep showing us and regulators keep denying, Budd-E also has no side mirrors—in the manner of Volkswagen’s remarkable XL1—replaced instead by cameras.

Some of what’s been shown is conceivable now. For example, Budd-E has both voice recognition and passenger position recognition, which could be done today with multiple microphones. Though the challenge is to interpret, and filter out, the voice commands of a kid in the second row vs. dad riding shotgun.

And even advanced gesture controls that allow the driver to alter functions and swap “tile” positions on the flat-panel displays ringing the dash are doable now—although given how much electronic trickery is in the show car, there’s a natural question about what such a fully optioned peace-mobile might cost. And, oh my, the repair bill, should your Budd-E decide not to recognize any of your gestures one bitterly cold morning.

Not to worry. In the future, cars won’t ever break.

And actually, we don’t have long to wait before some of this virtual reality is no longer virtual.

The first car VW showed us was the e-Golf Touch, a version of the e-Golf available now in select states. It’s clearly the range topper, because it inherits the dual-display design we’ve already seen in the new Audi Q7. Volkswagen takes the idea yet further, via app functions. The idea: You have a Volkswagen Car-Net app on your phone, and whenever you get into any Volkswagen, a preferences sync occurs in the background. The car then knows your commute, not just your contacts, and can route you accordingly.

Volkswagen also says a 2.0 rollout will allow the car itself to have its own Twitter and Facebook IDs. This will allow automatic status updates when you’re motoring to dinner and are stuck in traffic. It’s all rather contradictory to the spirit of the Sixties, when you just showed up when you showed up. But by going big at CES, VW showed that it still has innovation in the tank.