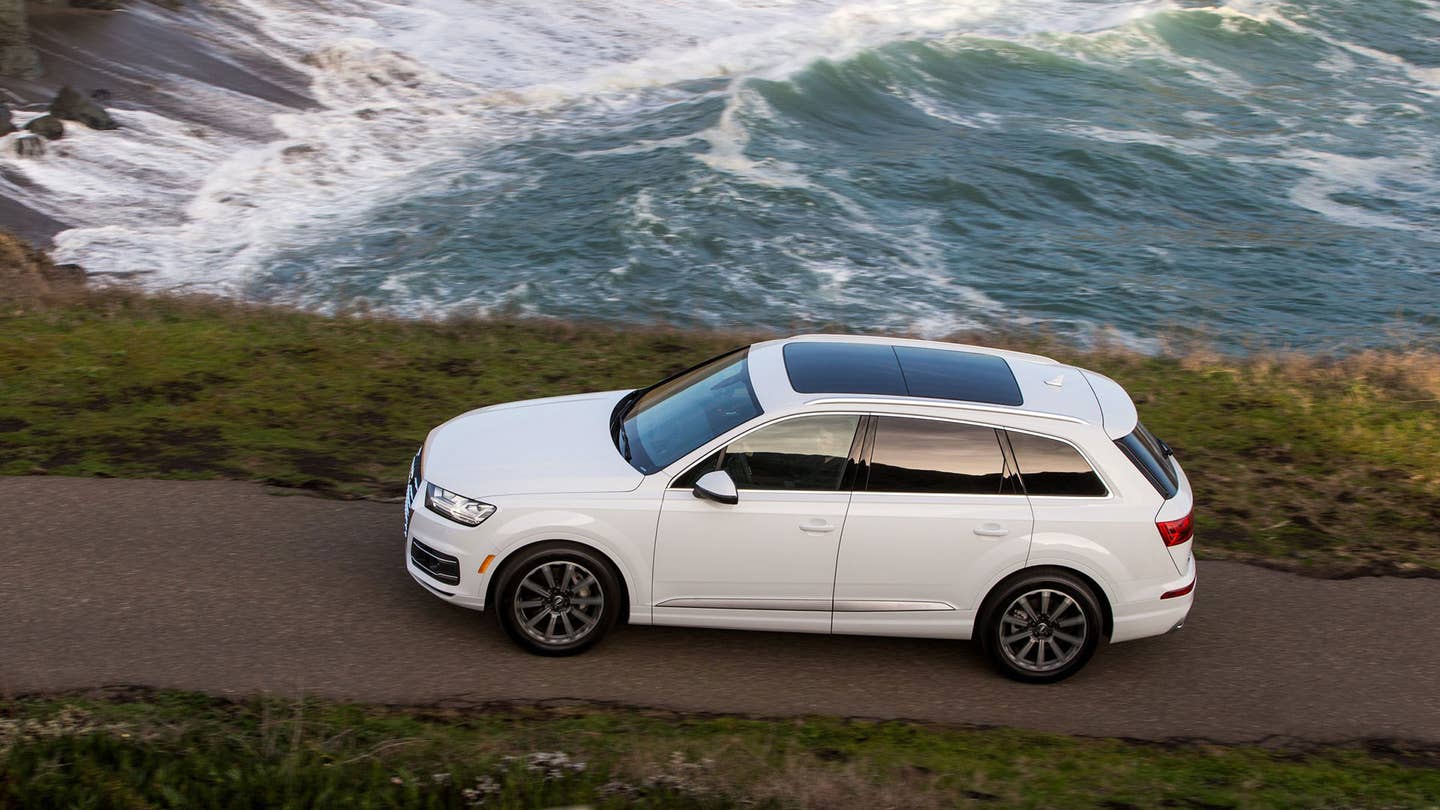 What’s a spoiled family to do with $60,000 to spend and a desire to sleigh and slay the suburbs? The acclaimed new Volvo XC90 and Mercedes GLE-Class are freshly wrapped holiday temptations. And now the redesigned Audi Q7 comes to dangle from the tree, a seven-passenger sugarplum sparkling with aluminum and enough peerless Audi gadgetry to bring joy and wonder to parents and kids alike.

Toys include the dazzling “virtual cockpit” animated display first seen on the Audi TT, optional air suspension and rear-wheel steering, and the most advanced semi-autonomous driving this side of Tesla’s Autopilot. On our all-day loop from California’s Napa Valley north to Mendocino, then south along a foggy Pacific coast, the Audi’s new traffic jam assistant steered the Q7 with spooky decisiveness on curves that would flummox competing systems from Mercedes or Volvo. And its adjustable controls let the Q7 keep a surprisingly aggressive pace with cars ahead, with nary a foot on either pedal.

Even the Grinchiest part of the Q7, a jacked-wagon exterior that initially seemed blandly conservative, turns out to be a welcome guest in Who’s Whoville. I said I hated it. I was wrong. Parked alongside the 2016 model, the previous Q7 instantly looks aged and overfed. And its retainer-mouthed face can’t touch the trompe l’oeil design of the new grille, with its glowing aluminum frame, serrated slats that recall angry Ginsu knives, and a quartet of black gun barrels that terminate in four Audi rings.

The Q7 is still demure enough for the Harper Valley PTA. But the Audi’s clean facets, solid-as-a-butte stance and sculpted wheel arches—the latter a nod to the ur-Quattros of rally-racing fame—do grow on you. Typically precise Audi details include aluminum blades running beneath the doors, trapezoidal exhaust outlets and LED headlamp markers and taillamps. Audi calls the lights arrow-shaped, but they also look like little space shuttles.

The interior needs no critical deconstruction. This is an Audi, an expensive Audi at $55,750 to start, and well over 70 grand for an option-laden model. It’s as deluxe inside as an A7 sedan, with a furniture maker’s attention to craftsmanship and the rich-grained timber to match. The steering wheel is slim-spoked Germanic perfection. A huge, slim-framed panoramic sunroof is standard, along with a child-sized third row with a welcome trio of power switches to erect or stow seats: one inside each rear door, another in the hatch. A handsomely slim, fall-away wafer of a dashboard accentuates the width and airiness of the space, including added shoulder room in all three rows and 1.7 inches more legroom in the second row. That’s despite the Q7 being 0.7 inches shorter and 0.6 inches narrower than before. The second row is split 35/30/35, carving a more comfortable middle perch than the usual 40/20/40 arrangement.

A line of vents spans nearly the full width of the dash, including a functional diffuser before the front passenger seat that moves air without blowing annoyingly on exposed skin. The Q7 debuts touch-sensitive rockers for climate controls (coming next on the 2017 A4) which display available functions when they’re brushed by fingertips. A pair of 3D audio systems include a Bang & Olufsen headbanger with 1,920 peak watts and 23 speakers, including those pop-up, motorized tweeters that so impress passengers.

A two-toned mix of indirect and pinstriped LED ambient lighting can be adjusted over 900 color combinations. But the virtual cockpit supplies the biggest eye-pop, spreading its Atlas-sized Google Earth maps across the full 12.3-inch driver’s display at an Nvidia-powered 1,440 x 540 resolution and 60 frames per second. And unlike the TT and R8, which run every function through the driver’s display—a bit awkwardly at times —the Q7 adds a supplementary, central multimedia interface screen and rotary controller. The MMI controller and its expanded glass fingertip drawing-pad reside on a luxurious center console with generous cubbies for phones and other gear.

Add an optional head-up display and there are three information displays to feast eyes upon, though the pop-up screen arguably crowds too close to the virtual cockpit display. Still, from its realistic graphics to operational ease, the Audi’s scalable interface beats Mercedes’ Comand and whips the clunky unit in the latest Volvo.

Audi calls the Q7 its most connected car in history, and the roster approaches ridiculousness: Wi-Fi and Google Street View; smartphone-managed geofencing, curfews and remote locking; stolen-vehicle locating; a car finder; Twitter; streaming radio, weather and traffic. Apple CarPlay and Android Auto are on board. You can even manage functions with an Apple Watch.

When you’ve had your fill of digital toys, the Audi is also decisively more playful to drive. Where the previous Q7 was thick and ponderous, with steering as lively as a Brink’s truck, the new one is transformed by its car-based platform—the longitudinal MLB architecture that will undergird an army of models from a redesigned A6, A7 and Q5 to a 2018 Porsche Cayenne. With a body composed of 41 percent aluminum, this former lardass tips the scales at 4,938 pounds and lowers its center of gravity by 1.6 inches for sharper control. A slick five-link suspension saves 235 pounds alone, and allows a flatter, wider cargo floor in back. Doors skinned in aluminum save another 53 pounds.

With its overachieving V6, the resulting Q7 is even faster than our seat-of-pants testing might suggest. Audi cites a class-leading 5.7-second dash to 60 mph for the 3.0T model, whose reworked supercharged V6 supplies 333 horsepower and 325 pound-feet of torque. The supercharger now spins up only on demand, disconnecting via a clutch to save premium gasoline. An eight-speed, paddle-shifted Tiptronic automatic transmission is as invisible and uncomplaining as a Washington political handler.

Fuel economy rises 17 percent to 19 miles per gallon in the city and 25 on the highway; we saw 20 mpg over seven hours of mostly aggressive driving. Audi will add a more affordable two-liter turbo-four version during the 2016 model year, supposedly followed by a three-liter TDI diesel-six at an unspecified date. Don’t hold your breath on that TDI, with Audi trying to keep the multibillion-dollar stink of the VW scandal from harming their still-sterling reputation.

Steering is on the light-and-carefree side, though it firms up in the Dynamic mode of Audi’s Drive Select system. But the Q7 feels altogether more nimble and car-like: It’s no Porsche Cayenne or BMW X5, but it’s as dynamic as any seven-passenger, kid-convoying SUV. You’ll want the air suspension, and not just for its superior ride quality, versatile bandwidth between comfort and sport, and an adjustable ride height that can stretch to 9.6 inches of off-road ground clearance. That optional suspension also comes with the rear steering that boosts high-speed stability and gives the Q7 the tightest turning radius in its segment. “Best in class” also describes the 7,700-lb towing capacity.

Naturally, the Q7 is chockablock with standard or optional driver assistance systems. The Q7 will stop or slow itself when its cameras spot a vehicle or pedestrian and a vegging driver fails to halt. Attempt to turn into oncoming traffic at slow speeds—with not enough room to make it—and the Audi will block the move. Try to open any door when a car or bicyclist breezes too close and a strobe-like warning flashes in that door. As I attempted to reverse down a view-blocking gated driveway at a Napa vineyard, the Audi suddenly dabbed the brakes when it sensed a car speeding past. Impressive.

As mentioned, the Audi can mirror traffic and steer itself in stop-and-go situations with a remarkable degree of robotic skill. And the slightest fingertip pressure on the steering wheel—even a cleverly placed knee—keeps the video game going, mile after mile, without drawing a system rebuke to put your hands back on the freaking wheel.

Despite its truckish flaws, the departing Q7 was a favorite among the professional classes. The competition has grown fiercer, but this Q7 smoothly fulfills every luxury-SUV mission: protecting tykes with growing college funds, lavishly affirming mom and dad’s tax bracket and taste, and bringing us all one step closer to driving obsolescence. Cued by the pampering, faux-ranching environs of Napa, where this magic bus will soon proliferate like cabernet grapes, we kept whispering the same thing: Audi’s going to sell a shitload of these Q7s.