Infiniti ‘Will Be Great Again’ by Going Less Luxurious

Struggling Infiniti is expected to cut costs and become “Nissan-plus.” 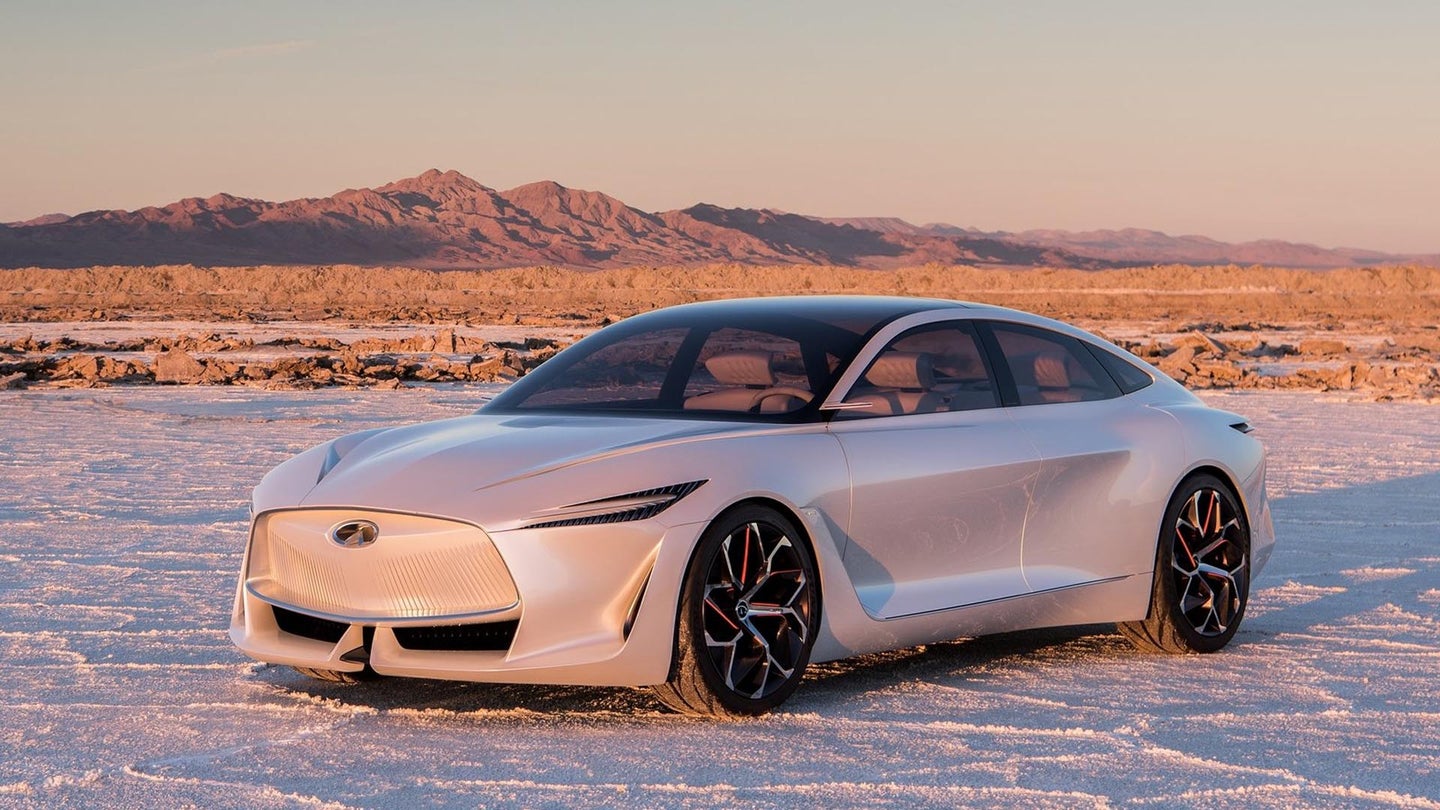 Good morning and welcome back to Speed Lines, The Drive's morning roundup of what matters in the world of cars and transportation. We hope you are managing to stay safe and sane right now. Today we're talking about Infiniti, Tesla, America's subpar electric vehicle charging network and more.

In 1989, Toyota and Nissan both launched U.S. luxury divisions as part of the Japanese automakers' coming-of-age, and in an attempt to squeeze out higher profit margins amid voluntary export restrictions. One of those brands redefined what luxury and reliability were in the modern age, and forced every other automaker in that space to up their game. The other brand was Infiniti.

It's safe to say that aside from a few hits, like the original Q45 sedan and the G series sedans and coupes of the 2000s and 2010s, Infiniti has struggled to ever make a splash. In addition to spending most of its existence as a home for slightly nicer export-grade Nissans from Japan and Europe, it's suffered from the same problems as its parent company lately: outdated technology and an unclear brand identity and value proposition.

As recently as a year ago, it seemed Infiniti was poised to lead the charge (pun intended, I guess) as Nissan's electrified brand. But that was before everything went to hell. Now that Infiniti's in the midst of a huge cash crunch, an emergency executive shuffle and aggressive global cost-cutting. A planned tie-up with Mercedes-Benz parent Daimler has largely fizzled out as well.

Where does that leave Infiniti? A move downmarket, reports Automotive News: away from competing with Mercedes and BMW and more like "Nissan-plus." It means more platform sharing with existing Nissan cars—sort of like it was in the 2000s. From the story:

Under the shuffle, Infiniti's trademark rear- wheel-drive coupe and sedans — epitomized by the Q50, Q60 and Q70 — may eventually die off. In their place would come a Nissan platform, possibly pulled from the Altima or Maxima sedans, that accommodates the company's e-Power hybrid setup.

Infiniti, which saw global sales stagnate and then fall over the past four years, will focus mostly on the U.S. and China and get its own high-performance variant of e-Power to set it apart from rivals.

"We will bring back Infiniti as Nissan-plus, in terms of product and technology," Gupta told Automotive News in discussing Nissan's larger restructuring. The efficiencies brought by piggybacking Infiniti on top of Nissan are envisioned as powering a rapid rollout of new models.

The first Infiniti vehicles under the new approach should debut by 2023.

The story goes on to say that this is kind of a necessary move since Nissan has to make billions of dollars in cuts, so it can't afford to pump tons of money into rebuilding an already shaky luxury brand to fully compete with Lexus and the Germans. (It also says that former Nissan-Renault megaboss Carlos Ghosn "wanted Infiniti to account for 10 percent of the world's luxury market and rack up annual sales of 500,000 vehicles," which is ambitious and comical in equal measure.)

That story's worth a read in full, and it also notes that Nissan has work to do with its U.S. Infiniti dealers, who also aren't happy with the current regime's abysmal sales and may not love this new cut-rate direction. At least we're getting a new Z on the Nissan side.

What Do Tesla's Price Cuts Mean?

Last week—which feels like a year ago, given everything lately—Tesla announced price cuts to all its cars except the new Model Y. The aging Model X and Model S are being reduced by $5,000, and the Model 3 gets a $2,000 discount. As we noted in our story on the matter, Tesla's trying to drum up sales after its California factory shut down during the pandemic (and after CEO Elon Musk ordered everyone back to work early) but it lacks an in-house finance arm to offer zero-percent deals like most automakers.

The Verge has some additional thoughts on the situation, distilling the price cuts to five factors:

Tesla isn’t immune to the pressures facing other automakers.

The price cuts target older vehicles and suggest they have peaked in demand.

Tesla relied on federal tax incentives for electric vehicles and a strong economy to boost sales — and now both are gone.

Other automakers are offering deals, so Tesla needs to offer deals to remain competitive.

The last one is especially important, because no automaker is more beholden to quarterly ups-and-downs than Tesla and its often-volatile stock price. Though it came into 2020 in much better shape than some legacy competitors, it now has a lot of work to do to catch up with projected goals.

One thing I wonder about is the future of the Model S and Model X entirely. They're both older, expensive and outpaced in attention by the newer Model 3 and Model Y. I'm sure they're due for eventual heavy updates, but I'm curious if an outright replacement is in the cards.

Finally, on the subject of electric vehicles, let's talk about charging. I still maintain Tesla deserves infinite credit for stepping up to build a propriety charging network as most competitors resorted to half-hearted partnerships or punted to municipalities and employers. While U.S. road-tripping in a Tesla is no longer anything novel, that's far from the case for other automakers.

No matter which automaker we're talking about, however, there still exist significant gaps in charging—especially in rural areas, as this Bloomberg story points out. Basically, charging stations can only make money right now when they're extremely busy. That may change with EV adoption, but there's your chicken-and-egg problem.

Here's a glimpse at the costs involved:

In the Upper Midwest, the future of driving comes to a halt in the parking lot of Noodles and Co., in Moorhead, Minnesota.

Hard by I-94, customers can plug in while picking up gluten-free Mac & Cheese and cauliflower rigatoni. To the west, just across the Red River, is North Dakota, but for EV drivers planning a road trip it might as well be the Rocky Mountains. The closest public, fast-charging station in that direction is 759 miles away, at a Harley-Davidson dealership in Belgrade, Montana—more than one-quarter the distance across the country—and it closes at 6 p.m.

For charging networks, the calculus is unforgiving. Not only is a rural station a bet on future demand, but an expensive one at that. The hardware for a level 2 charger costs $2,500 to install. Infrastructure for a level 3 charger, however, can easily top $320,000, according to a recent study by the Rocky Mountain Institute, a nonprofit focused on energy.

Such a unit can pump up to four times more electricity per minute than a standard outlet because it’s equipped with liquid-cooled wires and a high-capacity conduit. The surrounding grid often requires stronger feeders, new meters and transformers that cost up to $173,000 apiece. Digging trenches for cables and building a structure to protect the pumps adds to the price tag.

Every automaker is aiming for a huge EV push in the next few years. They all should have aggressive plans for how they're going to clear that hurdle.

The coronavirus is losing its potency in Italy and 'clinically no longer exists,' according to Italian doctors (Business Insider)

What should Nissan do with Infiniti? It seems like time to finally call it a day with that brand, is what I think. I don't see how "Nissan-plus" is going to make a dent in the market the way executives seem to think it will.