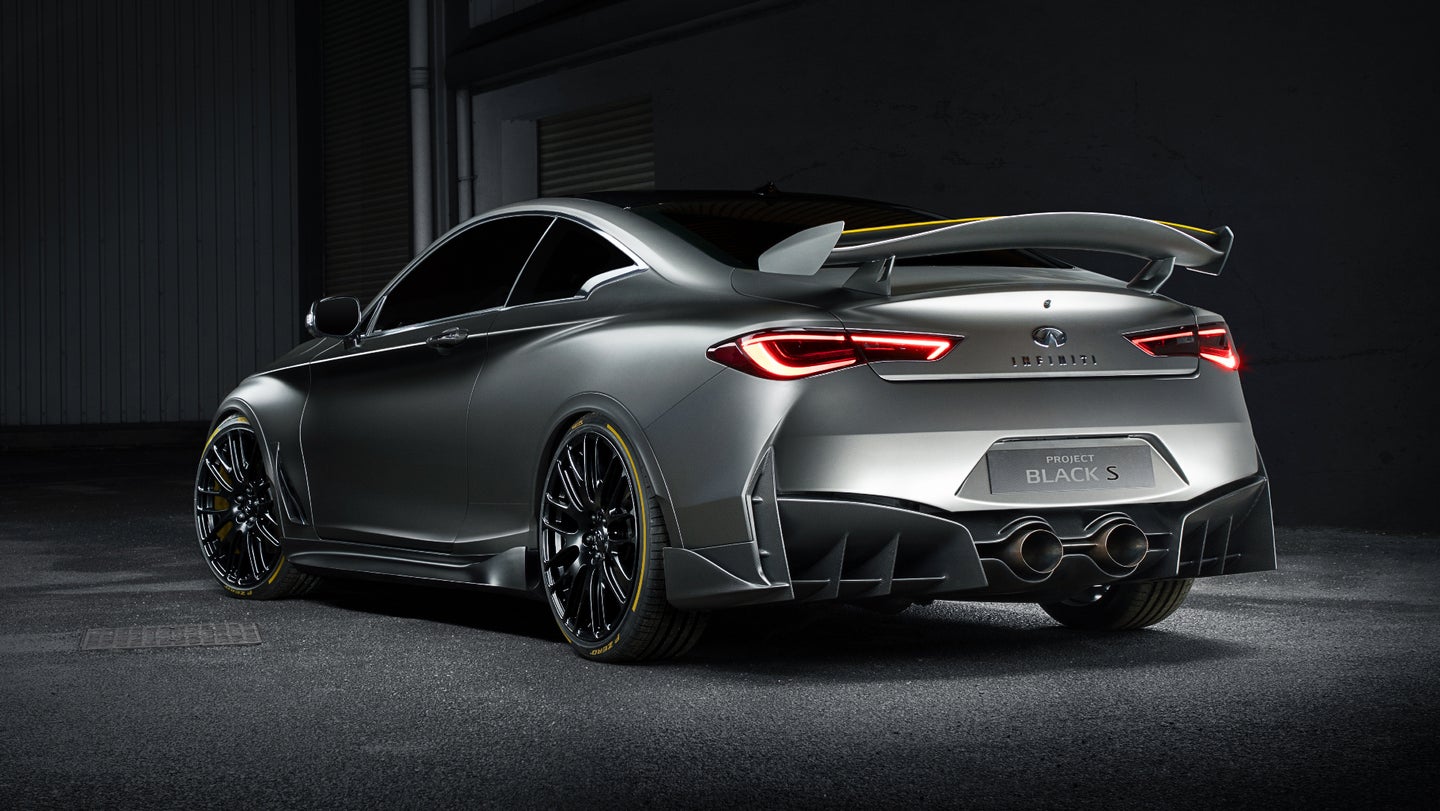 The Infiniti Project Black S concept was a Q60-based performance hybrid halo coupe with technology borrowed from the Renault R.S.18 F1 car. For a while, it sounded like Infiniti might actually build it, but Infiniti dropped its association with the Nissan-Renault-Mitsubishi Alliance's Formula 1 effort in December. Now it's official, per Automotive News: the sweet Project Black S concept is never going on sale.

Like the wild Nissan-GT-R-engined Infiniti Q50 Eau Rouge before it, the Project Black S debuted as a running concept car in 2018. It was unveiled at the Paris auto show and featured a ton of tech that was co-developed with the Renault Sport F1 team. The Project Black S featured F1-style energy recovery systems for both braking and exhaust heat that fed a 4.4-kWh battery pack for the hybrid system. That hybrid system boosted the car's twin-turbo V6 engine from 400 horsepower all the way up to 563 hp.

Those F1-style engine mods could rocket the Project Black S from 0 to 60 in less than 4 seconds—not bad at all for a comfy luxury coupe. Like we said, super cool stuff, even if we were always skeptical that it would happen based on Infiniti's track record of not building other cool concepts.

Infiniti spokesman Kyle Bazemore told Automotive News that the concept may be shelved, but it "continues to inspire" the brand. That being said, Infiniti dealerships weren't exactly sold on the limited-run halo coupe.

Ah, yes. Another Infiniti crossover. Boy howdy, that is almost as exciting as a monotone lecture at 8 a.m., or perhaps even a slab of beige sliding.

Infiniti National Dealer Advisory Board chariman Ed Lennon told Automotive News that they'd rather have a "volume product" instead of a "premium Japanese performance coupe" that "has to be very low volume" in today's market. Lennon, who is also the president of Circle Infiniti in West Long Branch, N.J., also didn't think it was a great fit for the brand as a whole.

"We're not really in the racing business," Lennon told Automotive News. "I would much rather see something like the QX60 [crossover]. That's a volume vehicle, that's where this company needs to go."

Sadly, there isn't much reason for Infiniti to have an F1 tie-in without being involved in F1. Renault Sport continued on as the Alliance's F1 brand, so if we want a cool F1/road car collab, it will probably come as a Renault instead. Infiniti also pulled out of the western European market in 2019, where F1 is a much bigger deal.

There's another important factor missing from Infiniti now in terms of the Project Black S going into production: its main champion within the brand, Roland Krueger. As Infiniti's president, Krueger touted the Project Black S as a showcase of the brand's electrification efforts and committed to bringing it to production in October 2018, per Automotive News. He left the company three months later, and the brand is on its third president since then. Ouch.

Then again, there needs to be something interesting in the lineup, even if it's more volume- or utility-oriented. When was the last time anyone was truly excited about an Infiniti that wasn't a concept car? Halo cars bring positive attention to a brand, even if they're not volume sellers. Dodge lives rent-free in many heads based on its Hellcat engine alone, after all. It's one thing to shift away from performance, but another thing entirely to fade into the background from a lack of stand-out products.

Perhaps being overly practical to the point of becoming an also-ran is why we can't have nice things from Infiniti.