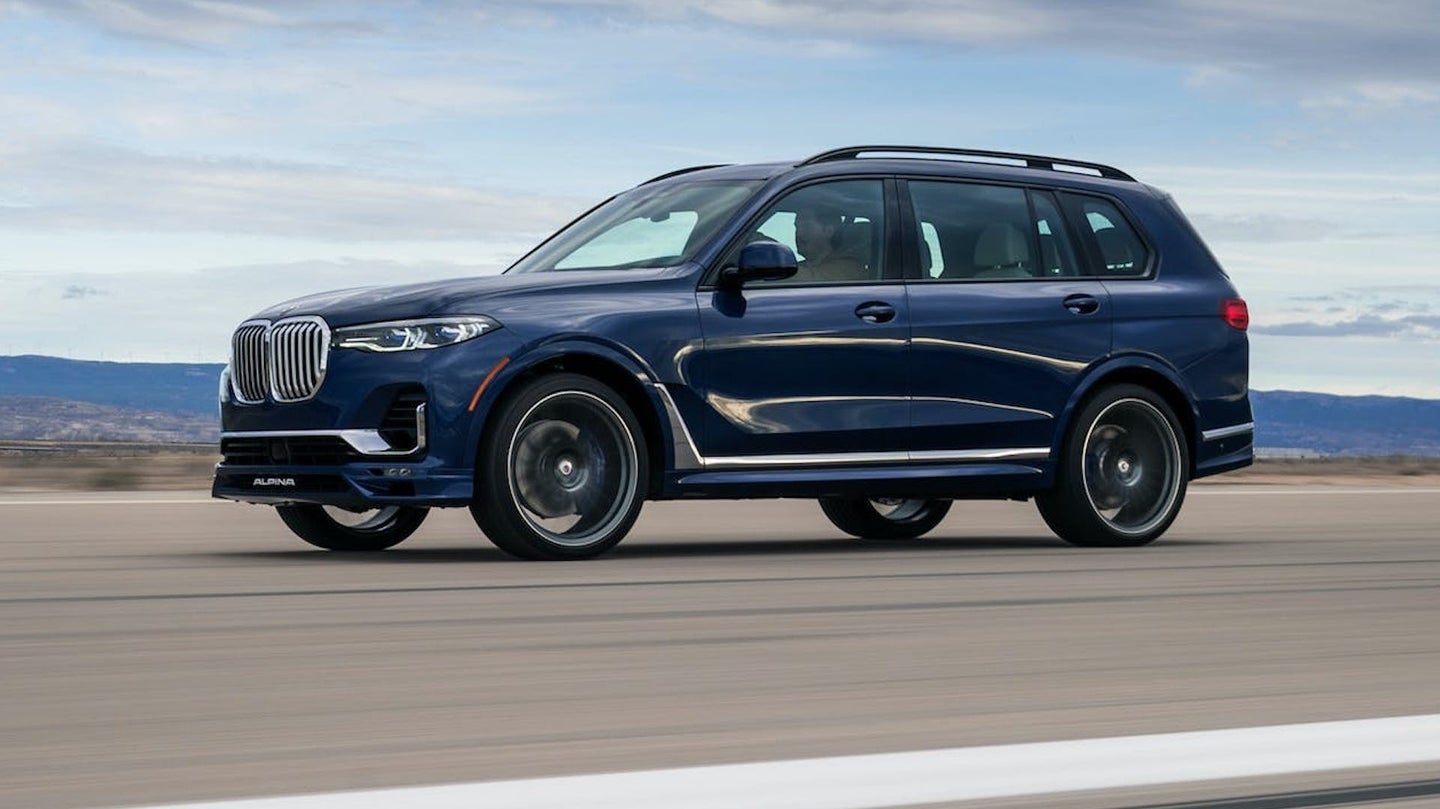 Alpina has taken some of BMW's best cars to even greater heights of performance and luxury over the years. Thankfully, we've been lucky enough to see a few of the factory-backed tuner's cars here in the states, but until now, we haven't gotten an SUV from the company. That's all about to change with the 2021 Alpina XB7. The new vehicle, based on the BMW X7, will be Alpina's first SUV entry for the U.S. market. BMW says the spicy crossover will be built alongside the standard vehicle in Spartanburg, SC, but make no mistake—this is a lot more than your standard luxury mall-cruiser.

The XB7 will get a 4.4-liter twin-turbo V8 that makes 612 horsepower and 590 lb-ft of torque, which will be good enough for the large SUV to make the run from 0-60 mph in just four seconds flat. That engine will be paired with a ZF eight-speed transmission and an aluminum oil sump located in the underbody to keep it cool. The gearbox has also been specially tuned to handle the additional power.

With the X7's curb weight well in excess of 5,000 pounds, keeping all that heft in check is a big job. Alpina has added its special dampers and uses the BMW’s standard two-axle air suspension to allow for a ride height change of up to 1.6 inches, depending on the vehicle’s speed and drive mode selection. Alpina will leave the X7’s xDrive all-wheel drive system in place, but will change the torque distribution between the front and rear axles to maximize performance and traction. A rear-steering system from ZF will allow the rear wheels to pivot up to 2.3 degrees left or right.

As you might imagine, Alpina had to add more than just performance to justify the XB7’s base price of $141,300 before destination—not far off of double the standard X7's starting price. The interior has been upgraded with a crystal iDrive controller that has a laser-etched Alpina logo, Merino leather, soft-close doors, and a three-panel panoramic sunroof. If that’s not enough, you can add the “Panorama Sky Lounge LED Roof”, which spreads light across the glass roof in more than 15,000 graphic patterns to replicate a starlit sky. BMW owns Rolls-Royce, after all, so it’s no surprise to see that the brand’s fancy interior lighting has made its way "down" into an expensive Bimmer.

For those who are unaffected by the worst economy since the Great Depression, BMW says that orders will open this month with the first deliveries planned for September. The XB7’s price might be steep, but if Alpina’s other masterpieces are any indication of how it will perform, it’ll be worth its price tag and then some.

Only 21 units will be built and all will be sold in Canada.