Canadian Driver Cheats Death After Axe Flies Through Windshield, Hits Him in the Face

And amazingly, it’s not the first time. 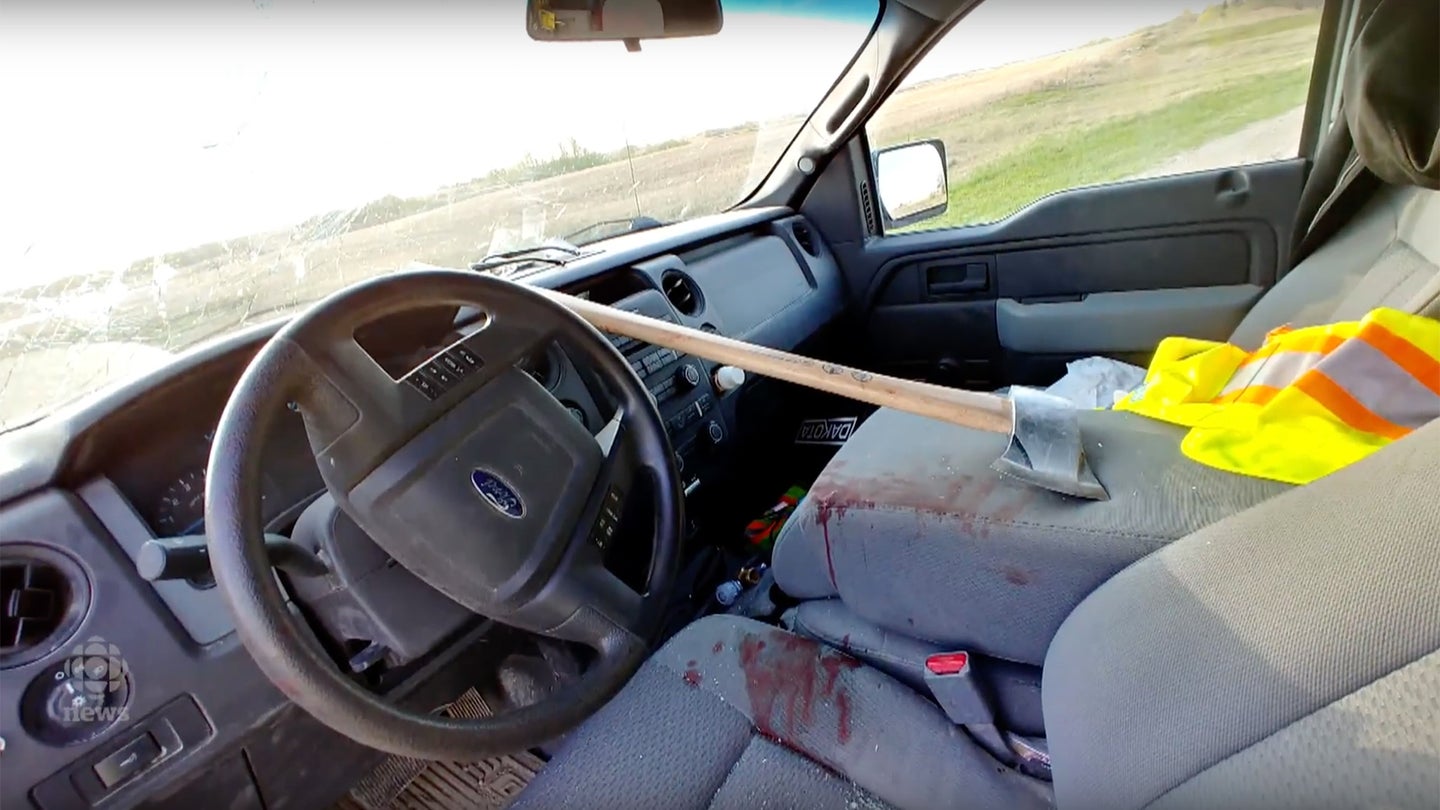 Out there on the road, freak accidents happen more often than most of us would like to admit. For one driver in Canada, though, that reality struck home in terrifying, Final Destination-esque fashion on a rural highway when an axe came flying out of nowhere, crashed through the windshield of his Ford pickup, and struck him in the face earlier this month.

The CBC has the unbelievable tale of local electrician Mackenzie Peddle, who cheated death as he drove on the Trans-Canada Highway between the small towns of Guernsey and Plunkett on May 16. He told the station that the last thing he remembers is enjoying the sunny day and feeling "excited to get home" from work. An hour later, he regained consciousness on the side of the road with his foot jammed on the brake, blood pouring out of a fresh head wound, shattered glass all over the cabin, and a two-foot axe that definitely wasn't there before resting on the center console.

Peddle was disoriented and confused. He soon realized there was a passerby tapping on his window, asking him if he was OK—but in his shock, he said that it took him a while to understand that he'd been hit in the face with a flying axe. The Good Samaritan helped Peddle call the authorities and his boss, and he was later transported to the hospital. Amazingly, he escaped with just a single laceration and a concussion.

The Royal Canadian Mounted Police told the CBC that the incident is under investigation, and while they're confident the axe fell off a passing truck, there are currently no leads in the case. Peddle himself still can't remember what happened in that missing hour, and he's not sure how he was able to pull his truck over and stop safely on the side of the highway.

"My wife said I should mount [the axe] on the wall as a reminder to make sure you're always tying down the load and making sure everything's safe before you leave," he said.

Peddle's got good reason to be concerned. Ten years ago, he was driving in a different part of Saskatchewan when an oncoming truck dropped a piece of rebar, which speared straight through his windshield, passed an inch over his shoulder, and drove itself through the backseat and into the truck.

"I was just kind of upset that it happened again and that things like this keep happening. Ever since the incident, I've had people reach out to me and tell me stories of similar things that have happened to them," he told the CBC. "It's frustrating—I guess that's the best way to describe the feelings from that—that people still don't tie down their loads, don't secure things in the back of their vehicles and are careless."

Is a pet treat hoarding dog the reason these wipers don’t work?