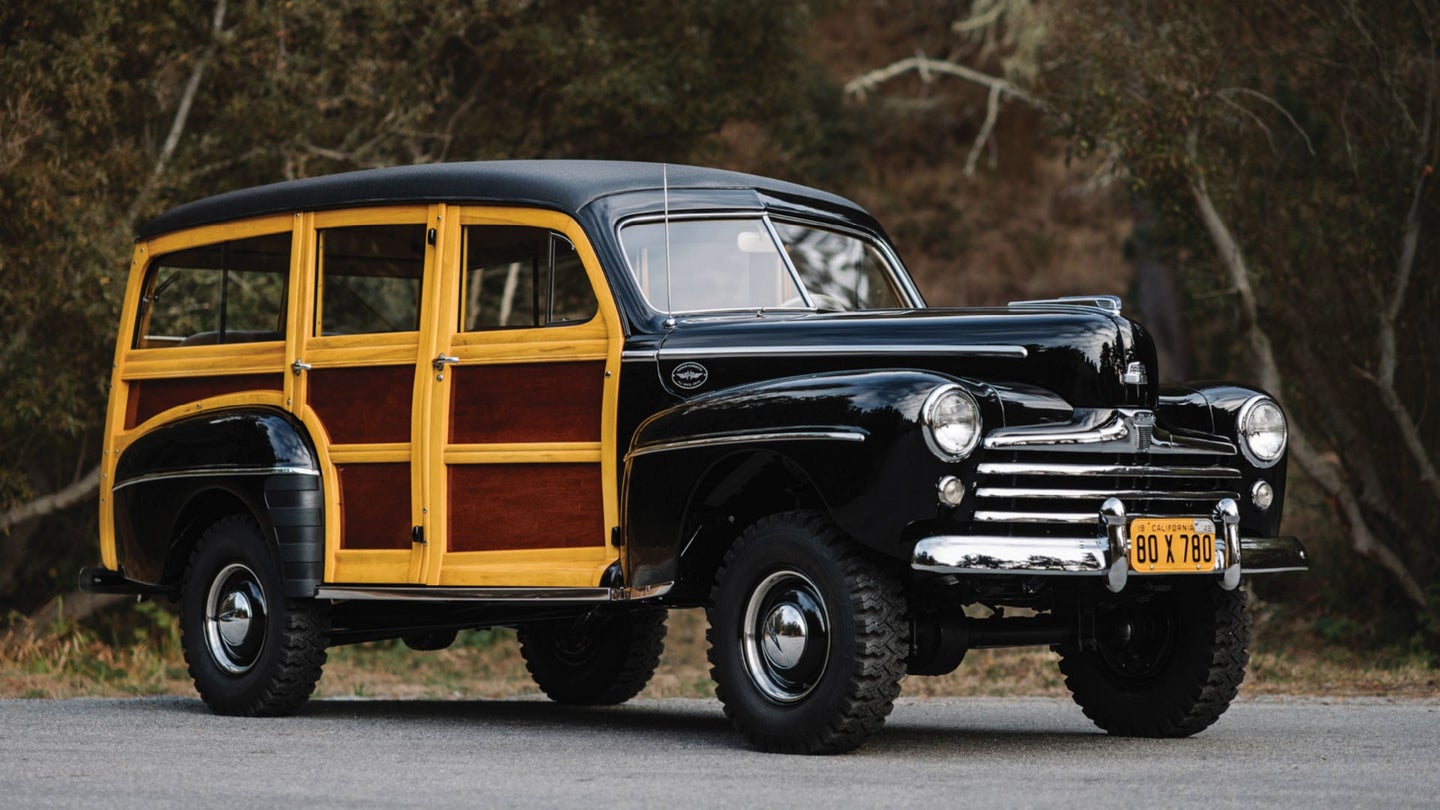 Drive around any well-to-do neighborhood or private school pick-up line and you'll see them: luxurious SUVs that will never, ever set a tire off the pavement. They're one of America's most popular fads, and essentially every automaker has hopped aboard the bandwagon of building high-priced crossovers that claim to have four-wheeling capability. Lucky for them, most customers won't actually test that theory out.

In 1948, though, everything was different—instead, buyers yearned for 4x4 solely because they needed it and unlike today, not many companies were offering such equipment. That's why Marmon-Herrington, an Indianapolis-based aftermarket firm, built a business model on converting then-modern machines to four-wheel-drive like this period-correct Ford Super Deluxe.

Soon to be auctioned off by RM Sotheby's is the above Ford people-carrier that was far ahead of its time. Much like some of the 21st-century's most popular SUVs, it sports a V8 engine, although its flathead design is a bit simpler than a contemporary fuel-injected power plant. It's even got third-row seating should you need to bring your kids and the neighbors. So help us though if so much as a drop of juice landed on these exquisitely reupholstered seats...

See, this truck was once a rugged yet well-appointed model that people could drive through inclement weather without worry of traction or condition. Now? That's not so much the case. Because it's been painstakingly restored by the woodie-obsessed Nick Alexander Collection, it's more likely to fetch six-figures when it crosses the auction block than be caught dead in snow and ice.

Just one year after the end of World War II, Americans were reveling in the availability of resources and labor. Still yet, this car's original $4,000 price tag kept most from being able to afford such a vehicle. Since it was only available in full-time 4x4, it was also limited to off-road use. This lent the Marmon-Herrington trucks to a special demographic, which included the U.S. Army and U.S. Forest Service, along with a few lodges that needed to transport their customers to and fro ski slopes.

This example has been recreated more in the spirit of the latter, with unbelievably refined aesthetics inside and out. The Super Deluxe's exterior woodgrain accessories have been refinished to the nth degree, as has its sparkling chrome and subtle black paint. And things only get better when it comes to the cabin.

Every surface you touch is of utmost quality, and to be honest, it's likely far better than it came from the factory. The driver is still responsible for operating the four-speed manual transmission, and there's no mention made of power steering, either. As a result, this is a wonderfully analog machine that harks back on an almost artificial sense of classy capability.

This Blue Oval restoration has only traveled 600 miles since it was restored in 2013, and it was shown at last year's Hillsborough Concours d’Elegance. No estimated going price is listed on RM Sotheby's website, but don't be surprised to see the Ford fetch more than any new Range Rover come Jan. 16-17 in Phoenix, Arizona.

Teddy Roosevelt would be all over this one.

With each taking about six months to build, these are nothing short of magnificent.

And it’s a bit more modern than it appears.