A 6.75-liter twin-turbo V12 that now produces 592 horsepower propels the brand’s “darkest and most urban” vehicle ever. 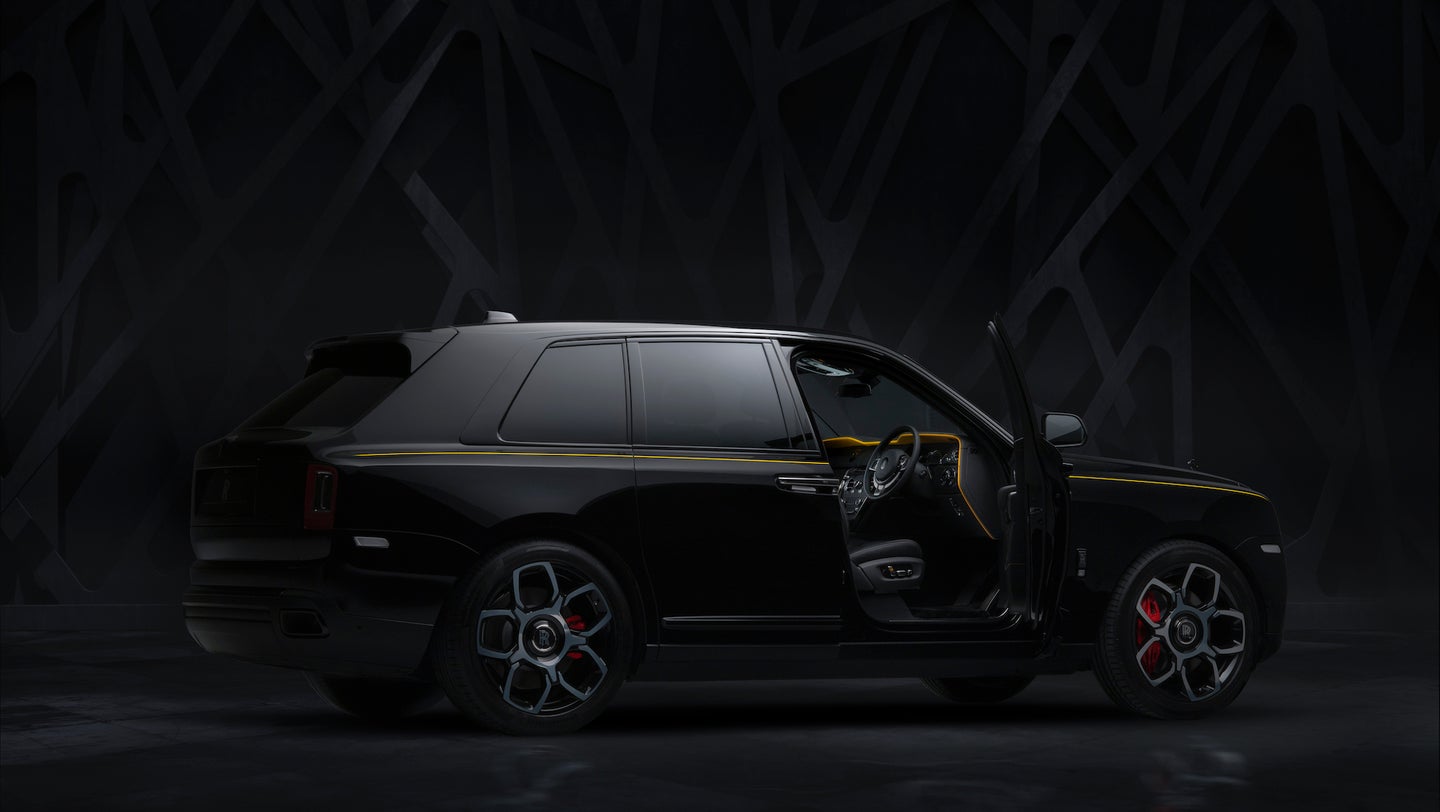 Rolls-Royce has unveiled its newest high-dollar creation: the 2020 Cullinan Black Badge, the darker and sinister sibling of the brand's majestic Cullinan SUV. The new variant offers dark motifs throughout worthy of the world's supervillains, or just anyone who highly dislikes chrome. There's also more power and several other performance enhancements to be found.

Dubbed "The King of Night," Rolls-Royce says the Black Badge aims to satisfy the overwhelming demand for vehicles from "younger, more adventurous clients who desire the most enriching experiences as well as a motor car's domineering presence." If that's code for Instagram-loving oligarchs who adore partying and taking selfies to make the masses jealous, then they're spot on.

The exterior of the new SUV is adorned with multiple layers of black paint and lacquer that are meticulously applied and hand-polished 10 times. Should you desire a different hue than the Black Badge's signature black color, the brand can call upon its 44,000-deep "ready to wear paint" portfolio. Yes, we said 44,000. If none of those hues satisfy you, however, the brand's paint facility in Goodwood will design a bespoke paint for you and only you.

Aside from the black paint, the Cullinan sports a black chrome Spirit of Ecstacy that can lower itself into an equally dark grille, and all chrome surfaces have been eradicated. Down low, 22-inch forged alloy wheels designed specifically for the Black Badge adorn all four corners, proving once again that the British have exquisite taste in wheel design. Seriously, look at those things. Inside the rolling works of art, the brand's first-ever colored brake calipers shine thanks to their high-gloss red paint, which has allegedly been developed to withstand the elevated temperatures generated by the rotors—assuming someone's chauffeur is in a hurry on their way to the marina or airport.

The dark theme continues inside with black leather and bright accents throughout and "technical carbon" veneer replacing the more traditional glossy or open-power wood trim. "A naked-weave carbon-fiber finish has been developed to create highly accurate repeating geometrical shapes that produce a powerful three-dimensional effect," read the press release, also claiming that the new veneer was a result of Sir Henry Royce’s founding philosophy: “When it does not exist, design it.”

The technical carbon requires six coats of lacquer before curing for 72 hours and is then hand-polished to receive its iconic mirror finish. According to the brand, the entire process for the interior alone takes 21 days and is only complete once all of the 23 interior pieces' uniformity has been confirmed.

Under the hood, the 6.75-liter twin-turbo V12 remains, but now it pumps an additional 29 horsepower, which takes the already hefty figure of 563 all the way up to 592 ponies. Torque is also increased to 577 pound-feet of torque. If only Rolls-Royce would offer a towing package in America as it does in Europe, this would be the perfect weekend hauler. Other performance enhancements include an all-new exhaust system that produces louder, richer tones and a high-performance braking system recalibrated for a sportier feel and response.

Pricing for the Cullinan Black Badge wasn't divulged, but with each Rolls-Royce practically being a one-off, getting a starting MSRP for what's essentially a rolling eff-u wouldn't mean much anyway. If you're curious, however, the regular Cullinan starts at $330,000, but the one we lived in for a couple of days was $410,000. Expect the Black Badge to come in closer to the half-million mark.