This unique sports prototype is one of three built, and it could be yours—if you've got boatloads of cash, that is. 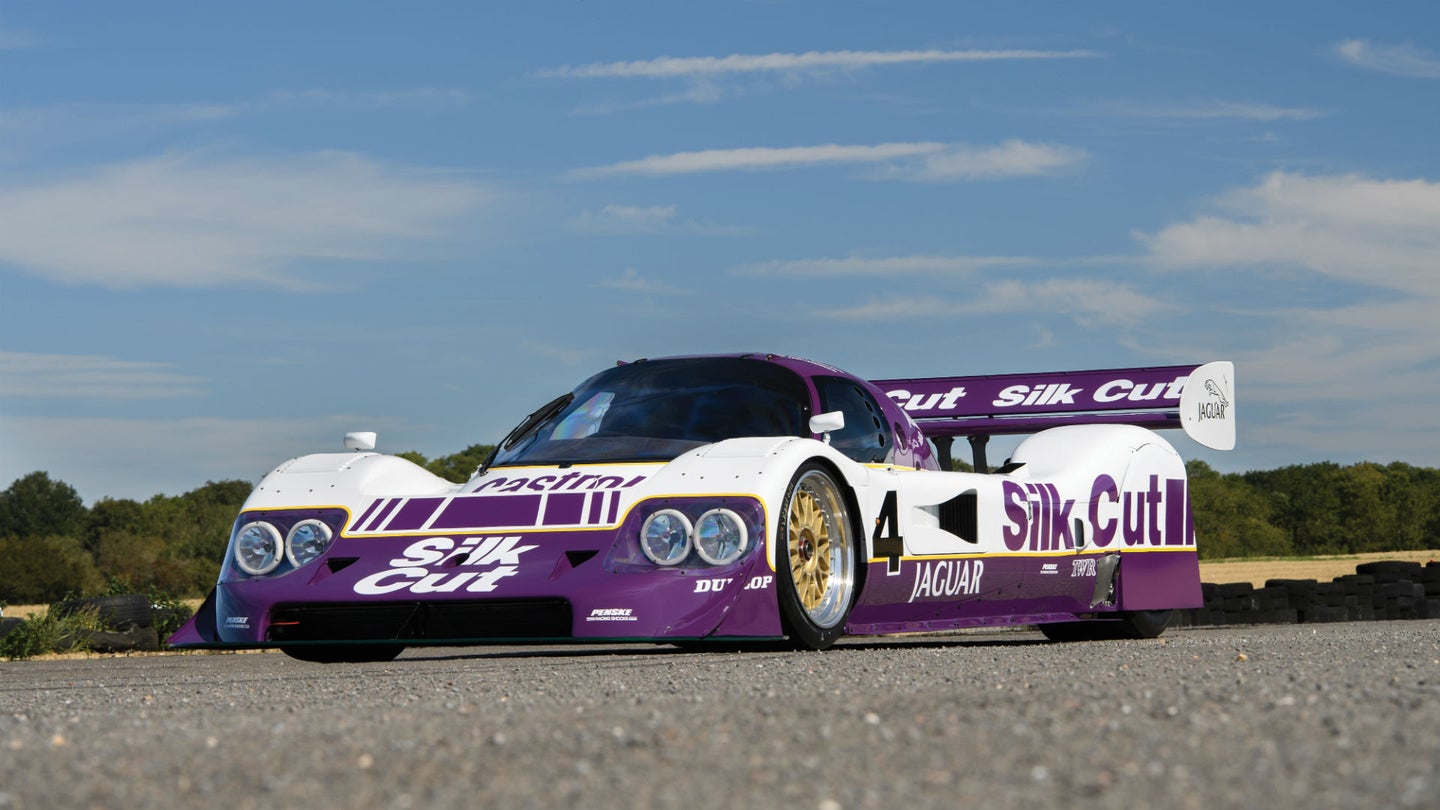 Everyone even slightly familiar with '90s performance cars remembers the Jaguar XJ220, the beautiful, ridiculously fast, and ill-received supercar Jag put out as the successor to the iconic XK120. Although the XJ220's specifications were controversial, it was still crowned king of the fastest production cars in the world in 1992. Jaguar's Bugatti-rival can trace its performance success to the XJR-11 prototype racecar, one of which is going to auction this October at RM Sotheby's fall sale.

The car was part of the XJR sports prototype lineup, known for its wheel spats and purple and white Silk Cut cigarette livery. As the successor to the mighty XJR-9, the first car to take away Porsche's seven-year winning streak at the 24 Hours of Le Mans, the XJR-11 had some serious tires to fill. Just three XJR-11s were developed by Tom Walkinshaw Racing (TWR) to comply with FIA Group C's new fuel regulations for the 1989 season, and it replaced the 9's V12 with a twin-turbocharged 3.5-liter V6. With the new-found knowledge of twin-turbo setups taking IMSA and Group C by storm, the XJR-11's motor was now 220 pounds lighter than its predecessor but produced 750 horsepower in the more powerful Group C variant (the car used for IMSA used a 3.0-liter engine and was called the XJR-10). A de-tuned version of this engine later became the XJ220's power plant.

Even with the new engine setup and handling improvements paired to an upgraded monocoque, the XJR-11 simply could not continue the XJR-9's legacy. Reliability problems, mostly attributed to the motor, plagued the cars constantly. The final two nails in the coffin came when a V12-powered XJR-12 won the 1990 24 Hours of Le Mans, and new Group C rules banning turbochargers emerged for the 1991 season. 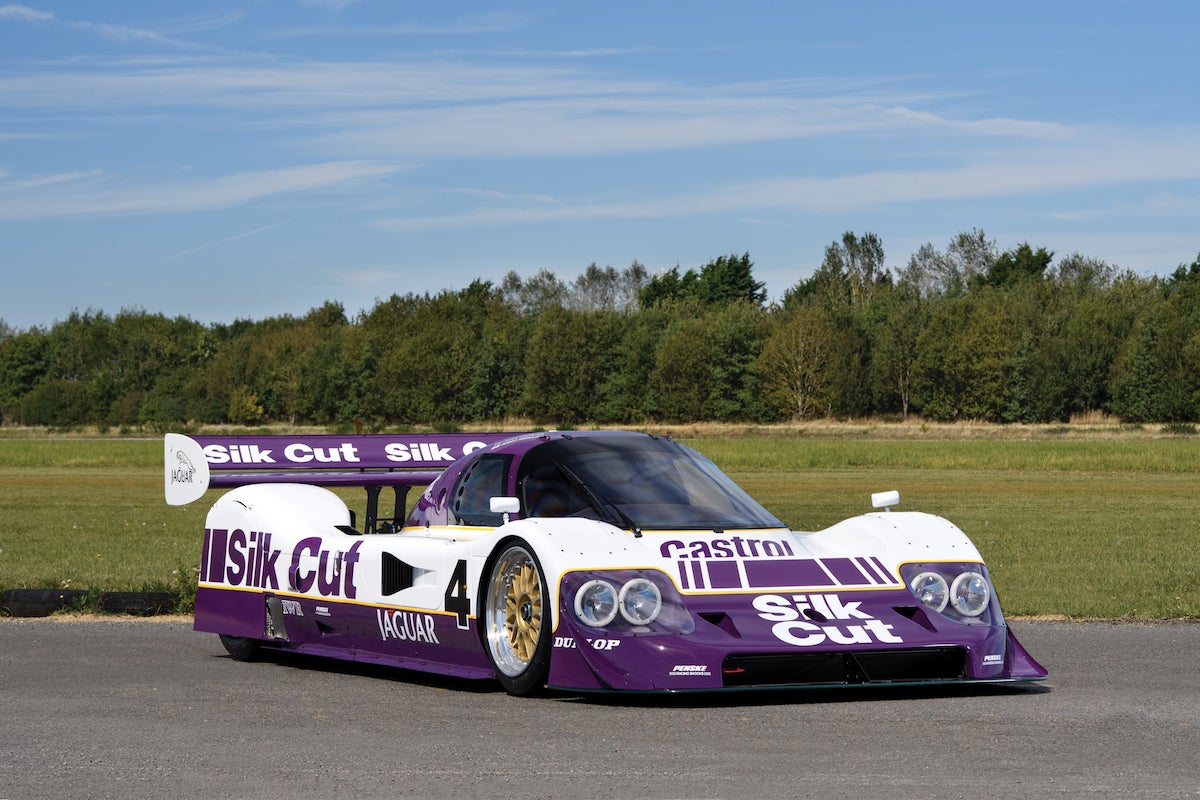 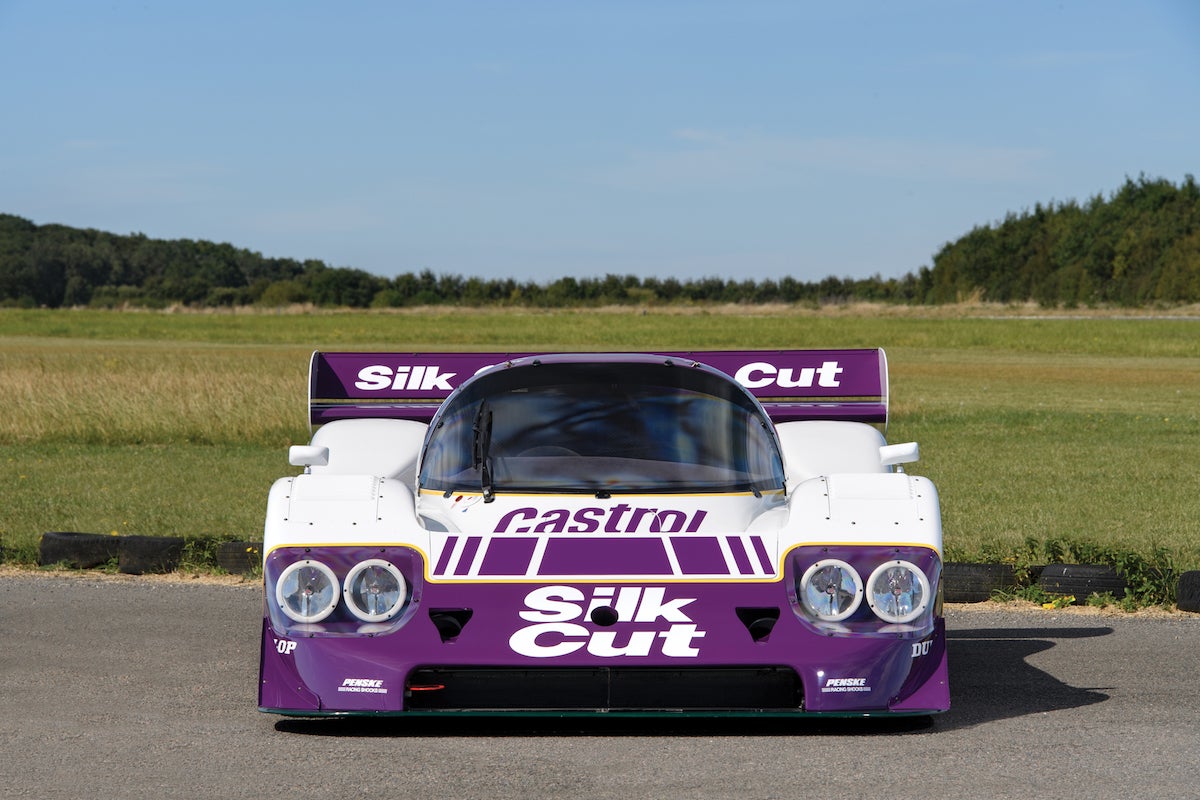 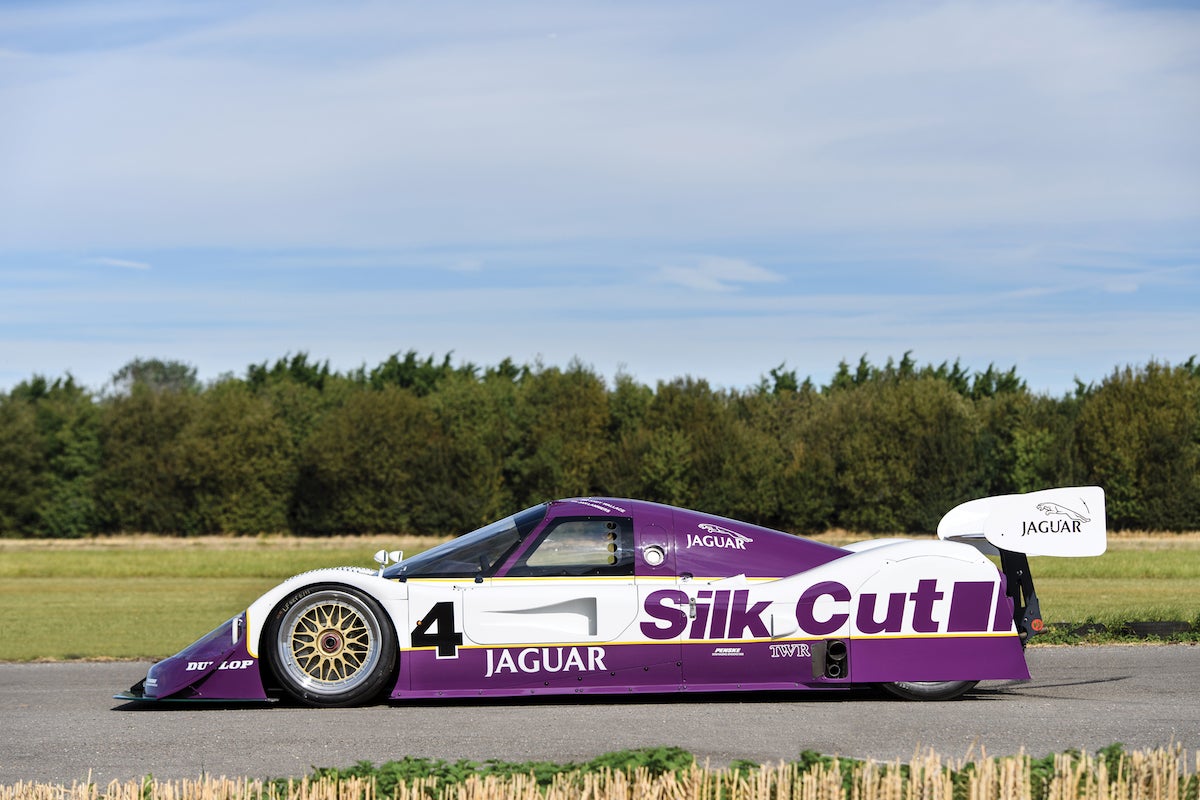 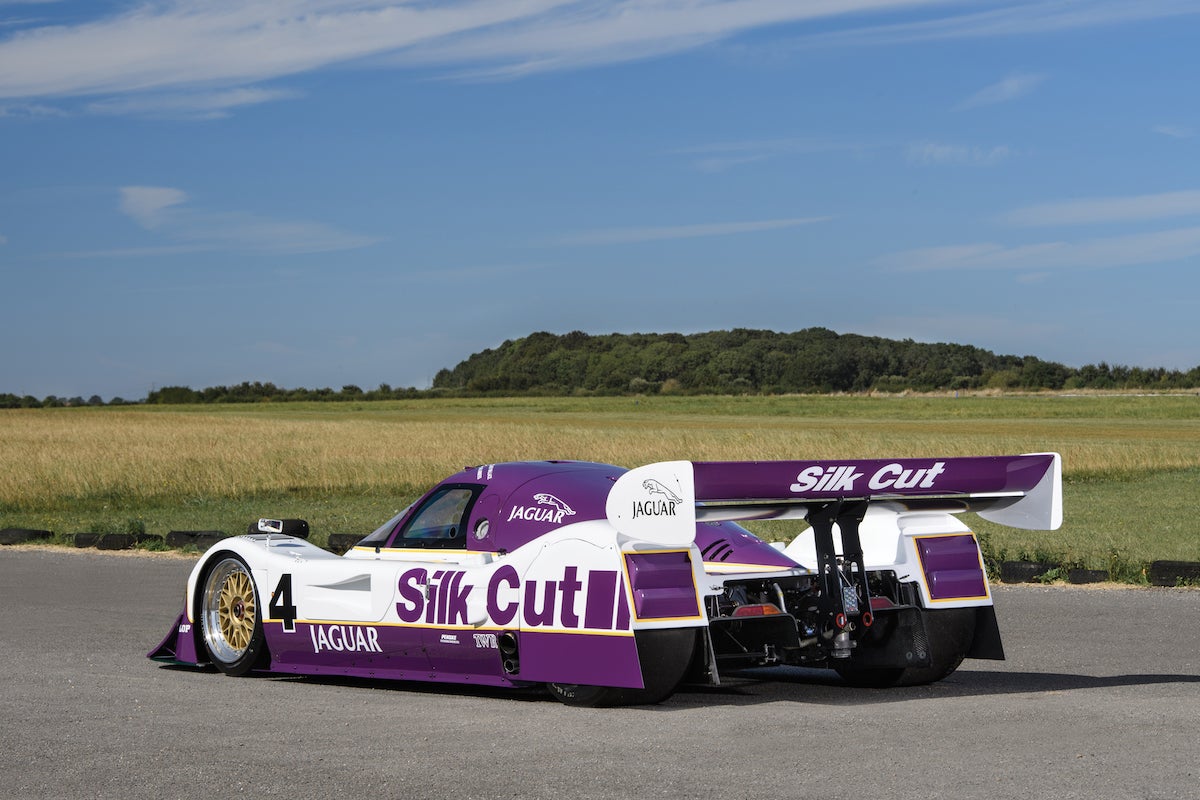 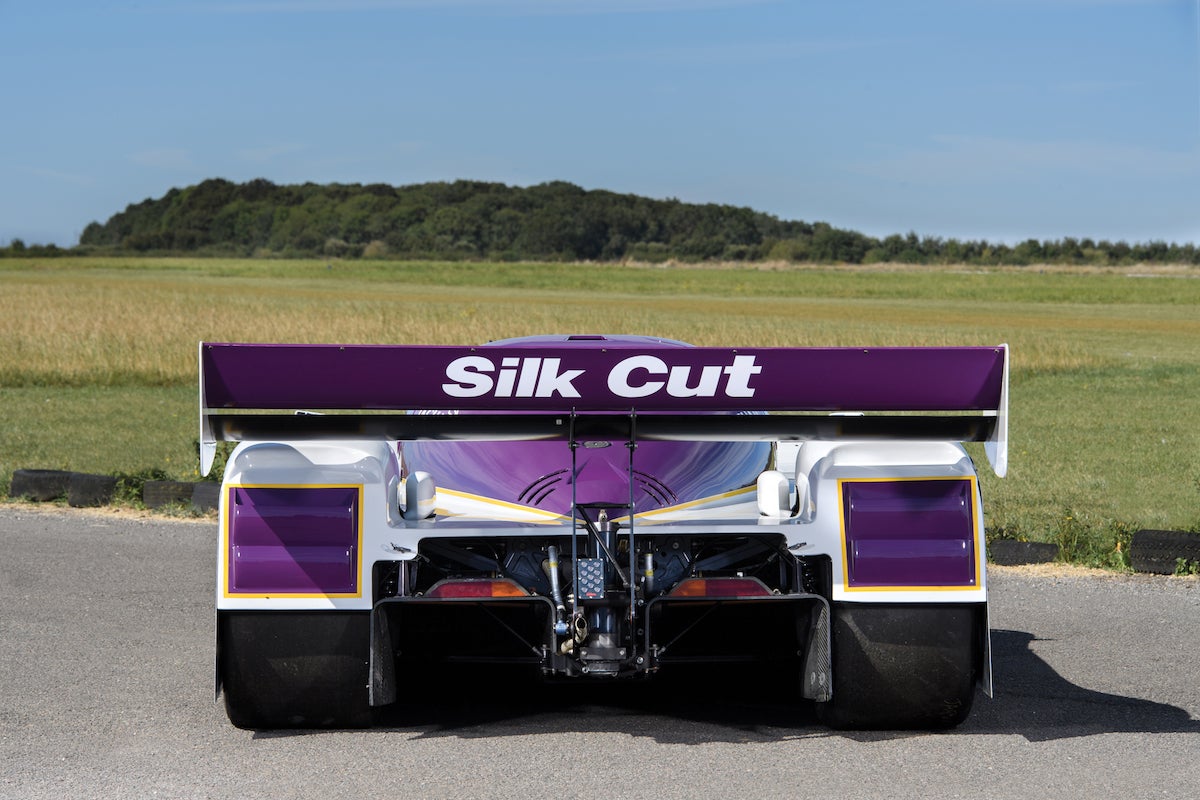 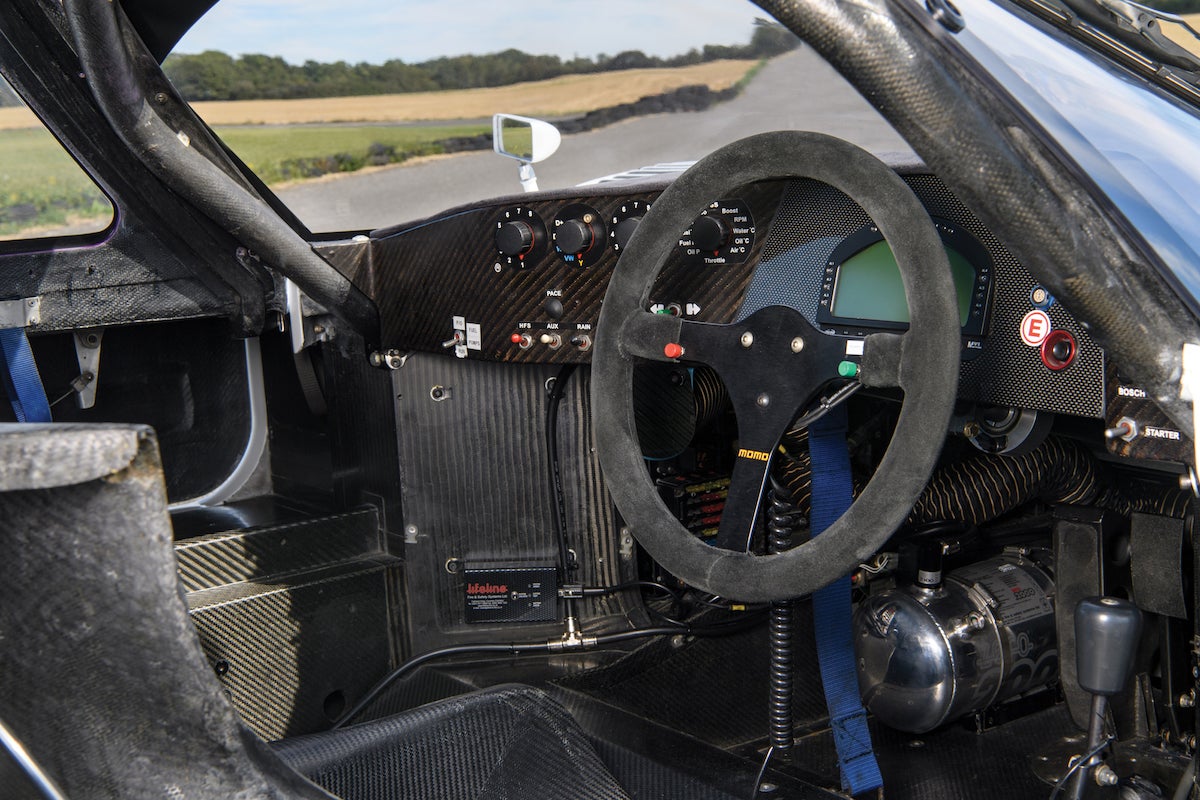 Despite the design's shortcomings, this particular car—which has held chassis numbers 289, 1290, and currently 590 (shuffling chassis codes was common practice at TWR)—participated in 13 races during its career, scoring podium finishes at Spa, Silverstone, and the 6 Hours of Mexico. It was driven by Andy Wallace, at all but one of its events.

"The [XJR-11] was actually a massive step forward on the V12 Jags," Wallace said. "It was a great car, but it just happened to coincide with one of the greatest sports cars ever, the Mercedes C11."

With its forced induction program smothered, chassis 590 floundered around in TWR's care for a while before it fell into the hands of Aston Martin Works president Paul Spires. He had it restored by an XJ220 specialist and campaigned it in a number of Group C and Jaguar racing showcases for the remainder of its time in his possession. Now it's looking for a new owner to continue the tradition.

This 1989 Jaguar XJR-11 will go under the hammer at RM Sotheby's London auction on Oct. 24. It's an ill-fated blip in Jaguar's motorsport history but its development paved the way for more successful Group C Jags as well as the elegant XJ220 supercar.