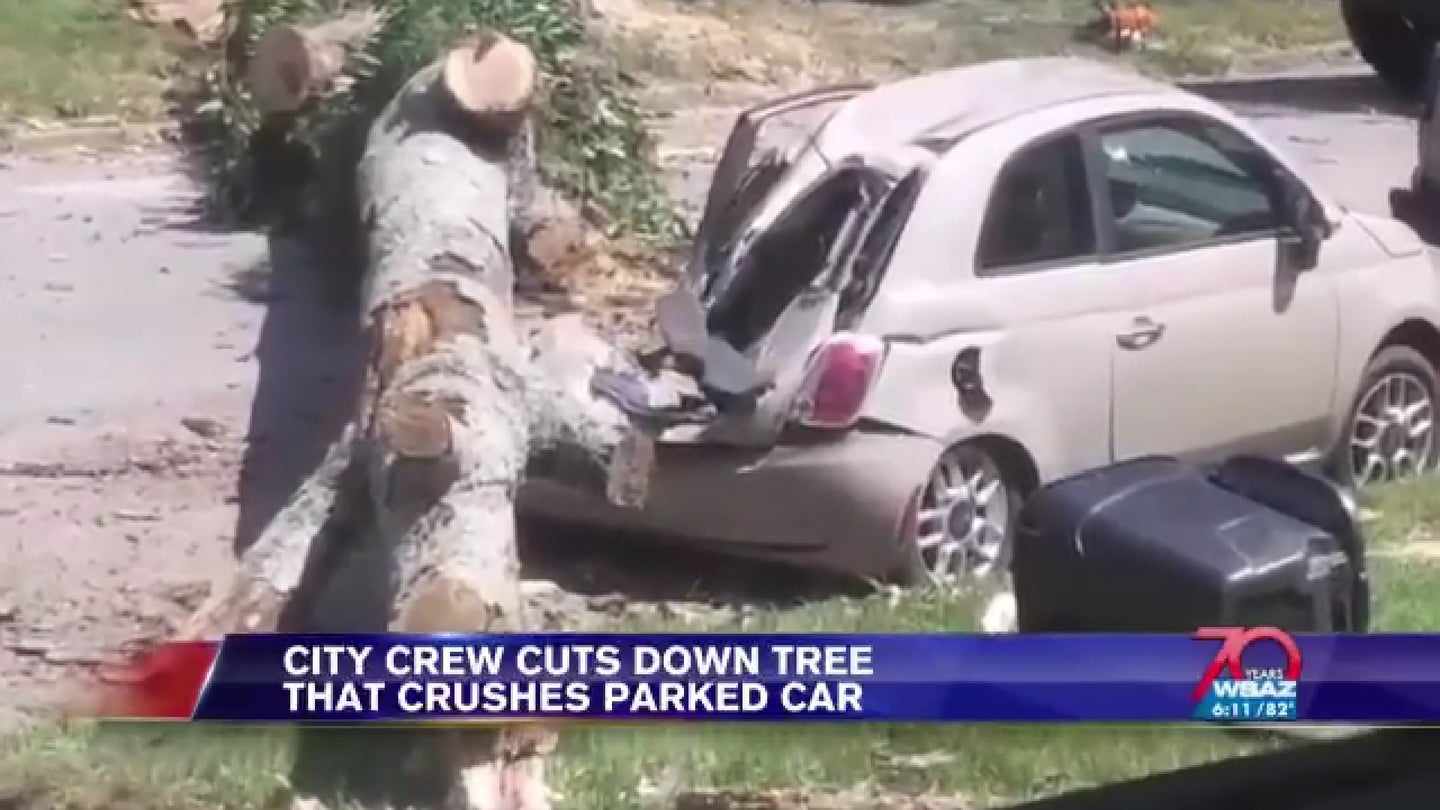 A West Virginia student found her Fiat 500 thoroughly destroyed early last week when a tree that was being cut down close to where it was parked fell on top of it. What just might be more noteworthy than the flattened Fiat, however, is one bystander's recorded reaction to it all.

Brought to our attention by WSAZ, it happened last Monday morning in the town of Huntington when a city crew was attempting to cut down a tree that had reportedly been giving the neighborhood grief for quite some time. Billy Tatum, who was apparently playing cards on his porch watching the crew work, told the news outlet that one of the tree's limbs was blown off during a storm several weeks prior, hitting the windshield of a parked truck.

It appears the tree was not done with vehicular destruction because when the city workers cut the thing down, it landed right on top of the Fiat city car that was parked nearby and owned by a female Marshall University student.

"It sounded like a beer can getting flattened," Tatum told a news camera. "It just was 'crunch.' I hate to say it, but it was kind of cool, you know? What guy doesn't like destruction. That's why we go to demolition derbies, but hey, the bottom line is that's that poor girl's new car, and she can't get to school now."

In order to get the full effect, here's that quote in glorious video form.

More golden Billy Tatum takes on the incident include:

"It flattened it like a pancake from the back seat to the tail and I said, 'Oh, whoops.'"

"I know things happen but some stuff is avoidable," Billy wisely points out.

"Shocking," another unidentified man in a blue shirt aptly comments.

A Huntington city spokesperson told WSAZ that the crew responsible was negligent and didn't follow proper protocol. The city rep also says Huntington has provided the student a rental car, opened an insurance claim, and is "committed to resolving this as quickly as possible to make sure the family is made whole."

While the student herself refused to speak to the press, her mother reportedly says she hopes the city employees involved get the proper training and that her daughter's car will be replaced.

Which material is more durable under extreme pressure?

Woman Says Feces Fell Off Plane, Through Sunroof, and Into Her Eyes

One hell of a crappy airline story.