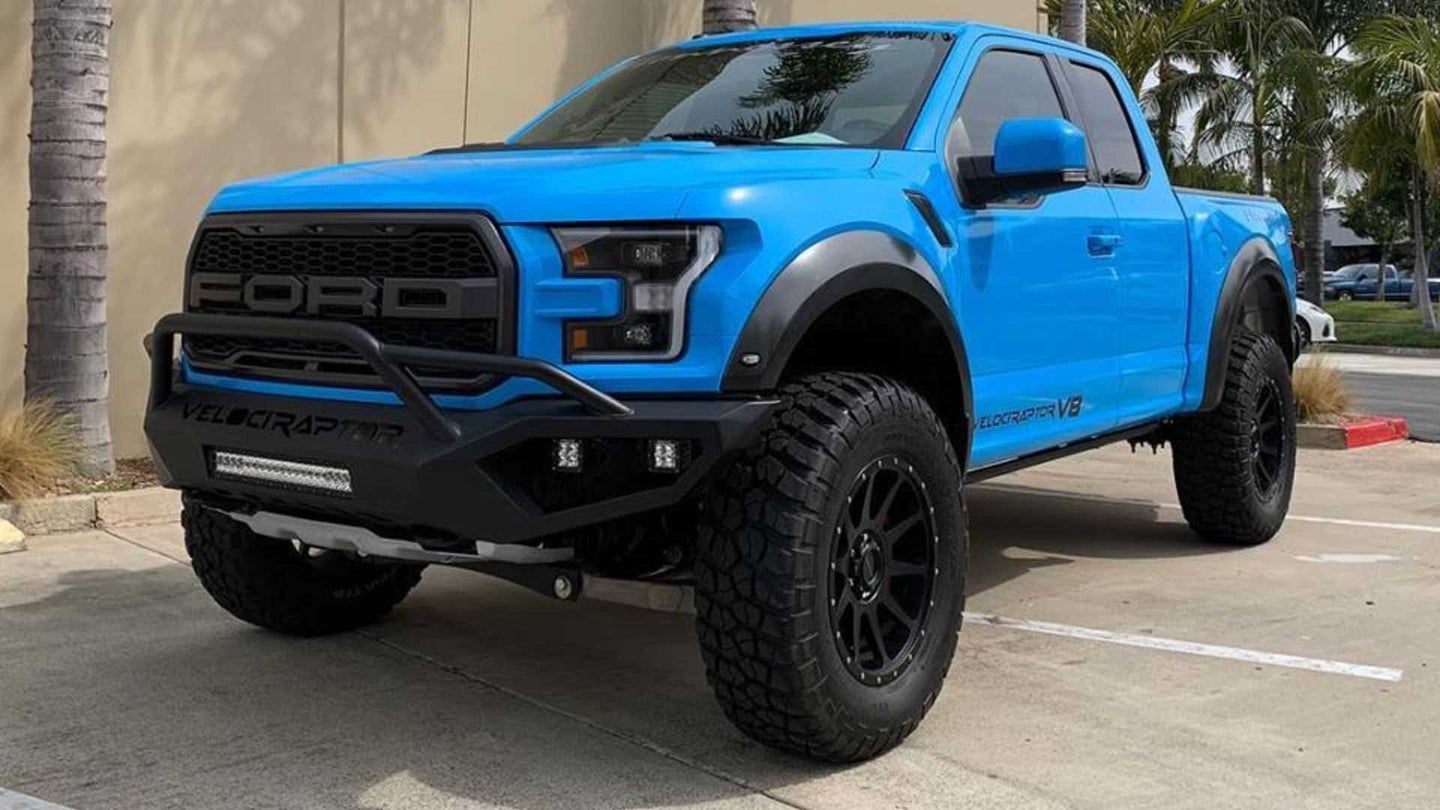 Hennessey Performance Engineering knows its way around the Baja-conquering Ford Raptor. It's modified the truck in essentially every capacity from adding two extra wheels at the back to swapping out the current-gen's twin-turbo V6 for a hearty V8. The latter appealed to former WWE star and current mega-celebrity Dwayne "The Rock" Johnson who recently picked up a truck of his own from the Texas-bred tuner—and it's a looker.

Coated in stellar baby blue and treated to a host of exterior upgrades including upsized wheels and tires along with a new front bumper, Johnson's VelociRaptor is all but factory stock. Arguably, it looks better than the already-handsome Raptor offered by Ford and one thing's for sure: it sounds infinitely better.

While we aren't ones to hate on the Raptor's 450-horsepower, 3.5-liter, twin-turbo V6, it leaves a bit to be desired in terms of aural amusement. Hennessey has fixed that issue by swapping in a supercharged, 5.0-liter, Coyote V8 that now makes a mountainous 557 horsepower and 449 pound-feet of torque. It's been dyno-tuned by the crew who built it and is set to run seven pounds of boost through the top-mounted blower. Not only that, Hennessey has managed to pair the truck's new V8 with its existing 10-speed automatic transmission, making for optimum power and quick shifts when it counts.

In total, this extra output helps the VelociRaptor to sprint to 60 miles per hour from a standstill in 4.1 seconds, or a full second quicker than a stock Raptor.

Hennessey can be seen congratulating Johnson on his new addition via Instagram, and rightfully so. The Rock now owns one of 100 VelociRaptors that will be built this year with each costing $147,950 including the Ford Raptor base.

The Fast and Furious star now owns yet another cool-mobile to go along with the rest of his admirable collection. This one's almost as cool as Lady Gaga's Ford F-150 SVT Lightning. Almost.

New Hampshire’s Team O’Neil Rally School is all about rally cars, but the burly Raptor proves more than willing to play along.