The show says the Teslas didn’t fit the “classic car theme” of the display, but other modern vehicles were allowed to stay. 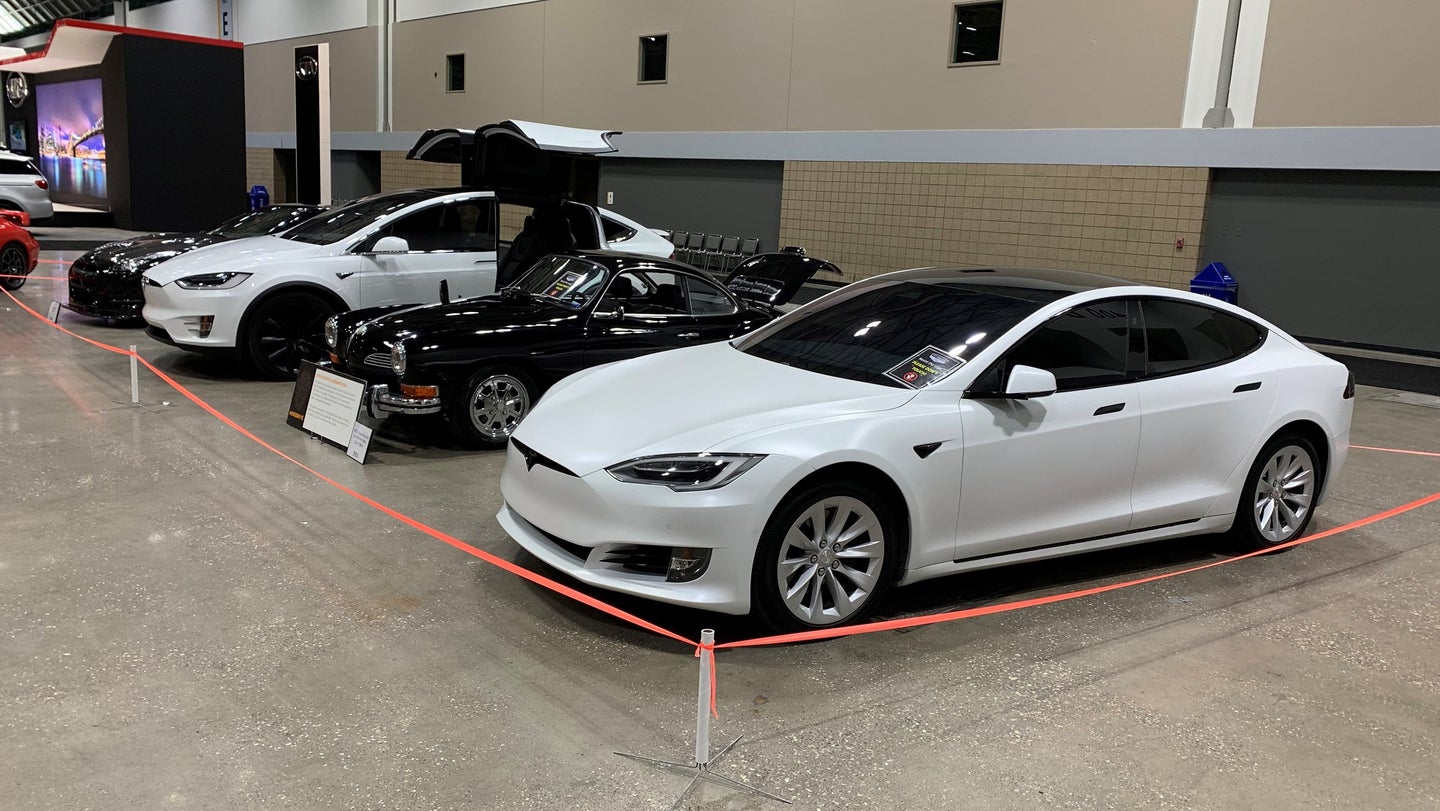 A group of Tesla owners is claiming discrimination by the operators of the 2019 Kansas City Auto Show and the Automobile Dealers Association of Greater Kansas City (ADAKC) after they were forced to remove their electric cars from an enthusiast display on the auto show floor. The issue? The owners believe the fact that Tesla circumvents the traditional dealership model and sells directly to consumers angered someone at the dealer group—and the evidence seems to back them up.

It all started when a small portion of Bartle Hall, the convention center where the Kansas Auto Show is being held, allowed the Kansas City Automotive Museum to put together a small group of cars that would appeal to auto enthusiasts, according to a show exhibitor. Separate from the official show floor, the small exhibition would host a plethora of unique cars to be provided by the museum or private individuals rather than franchised dealerships. It appears everything was going dandy until ADAKC got wind of the system-disruptive Teslas joining the exhibit.

The Drive was contacted by several Tesla owners that were originally approached by the museum to display their cars for the duration of the show. Based on our findings in several car forums and owner clubs, these individuals are well embedded into the Kansas City auto community and own other interesting vehicles like vintage European cars and modern exotics in addition to Teslas. One of these members is James Ransom—who, after prepping a Tesla Model X and Model S for display from March 6-10, he was told he had to remove the cars just one day after dropping them off.

"I was called on Wednesday evening and asked to remove the Teslas," Ransom told us. "I was told that the cars were not allowed to stay because they were not part of the Dealers Association. Something about a higher-up in the association who said that the Teslas could not be at the show due to the manufacturer not using dealerships for their sales."

Ken Smiley, a Tesla owner who's a prominent member of the Kansas City car community, was outraged when he found out what had happened, and decided to email ADAKC. While his own Tesla Model 3 isn't on display, Smiley is displaying his 1956 Jaguar XK140 and 2016 Porsche Cayman GT4 at the museum-led exhibition. Smiley shared the email he sent to ADAKC CEO Larry Carl and ADAKC administrative assistant Diane Connelly, who also serves as the auto show's floor manager, with The Drive.

It has come to my attention that a particular make of automobile is being singled out for unfair discrimination at the KC Auto Show this year and that the owners of these cars were asked to remove them from Bartle Hall. The cars in question were 2 used Tesla automobiles owned by private individuals and put on display as part of the KC Auto Museum’s variety of cars display at the KC Auto Show. As an officer/member in multiple car clubs in Kansas City (Porsche, Jaguar, All British, Tesla) I find this action reprehensible and urge you to immediately reconsider your actions before something like this goes viral and brings negative publicity to the car show.

I understand that with regard to new cars that Tesla does not have a dealer network and does not participate in the Automobile Dealer Association of Greater Kansas City. I would understand if your association told Tesla that they could not bring new cars down and could not be represented at the show unless they joined the organization. However, this is NOT what is happening in this instance. These two cars are privately owned used cars brought by their enthusiastic owners to help support the KC Auto Museum display at the auto show. There were owners who brought Pontiacs, a Noble, a couple of Ariel Atoms and Lamborghinis all of which are NOT members of the ADAKC. So if you are going to discriminate against non-members then you need to do it equally and ask that ALL non-member cars leave the show, not simply single out Tesla.

Please let me know whether or not the Teslas are welcome to come back or if the unfair discrimination against these owners and their vehicles is going to continue. Speaking of the owners, the people you are hurting are automotive enthusiasts, not the audience you want to hurt. These individuals took their time to clean up their cars and transport them down to Bartle Hall only to be told a few hours later that they had to take them back out. While I currently have 2 cars on display at the show (1956 Jaguar XK140 and 2016 Porsche GT4) I am not sure that I will be willing to support a show in the future that unfairly discriminates against a certain model car. I hesitate to think how [omited for privacy] would react if I told him that either my Jag or Porsche was being discriminated against and being asked to leave the show. As I mentioned this unfair discrimination isn’t hurting Tesla the car company which the association may have an issue with, but rather hurting individual automotive enthusiasts.

Smiley has yet to hear from either party, and emails from The Drive to the same executives have gone unanswered. Meanwhile, ADAKC made it clear it believes this is all much ado about nothing.

"This is a non-story," an ADAKC spokesperson told The Drive over the phone. "Ken Smiley is simply bringing this up because he seems to be angry and wants to stir the pot."

When asked for the reason for the Teslas' removal, the spokesperson claimed that "the show's producer deemed they didn't fit the classic car theme of the exhibition" and that it wasn't because of the dealers' association, although the spokesperson acknowledged that Tesla didn't follow such business model. When pressed about the fact that other modern-day vehicles like Lamborghinis, Nobles, and even Ariel Atoms were allowed to remain at the exhibition, the spokesperson said they "had to talk to the show's producer and call us back."  We have not yet received an answer.

Until there's an official word on why the Tesla vehicles didn't meet the exhibits criteria, we can only assume that current beef between dealers associations and Tesla is to blame for this ridiculous segregation. It's worth noting that other modern vehicles currently on display whose manufacturers aren't part of ADAKC didn't endure such unfair treatment—only Tesla.

For their part, Ransom and Smiley simply seem to want answers to a legitimate question: Why are others allowed to display their cars, but they aren't?

"I would love to put the two Teslas back in the show," Ransom told The Drive via email. "I do think an apology to me would be appreciated. They are just sitting in my warehouse down the street from the show.  Still clean and everything.  It would be great to bring them back to the show!"

"I don't feel that other people should have to remove their vehicles [that don't fit the "classic" criteria] just because I was forced to remove mine," Ransom added.

Courts refused to strip the automaker of its dealer license based on controversial sales tactics.