Could this be Tesla’s all-electric pickup test mule in disguise? 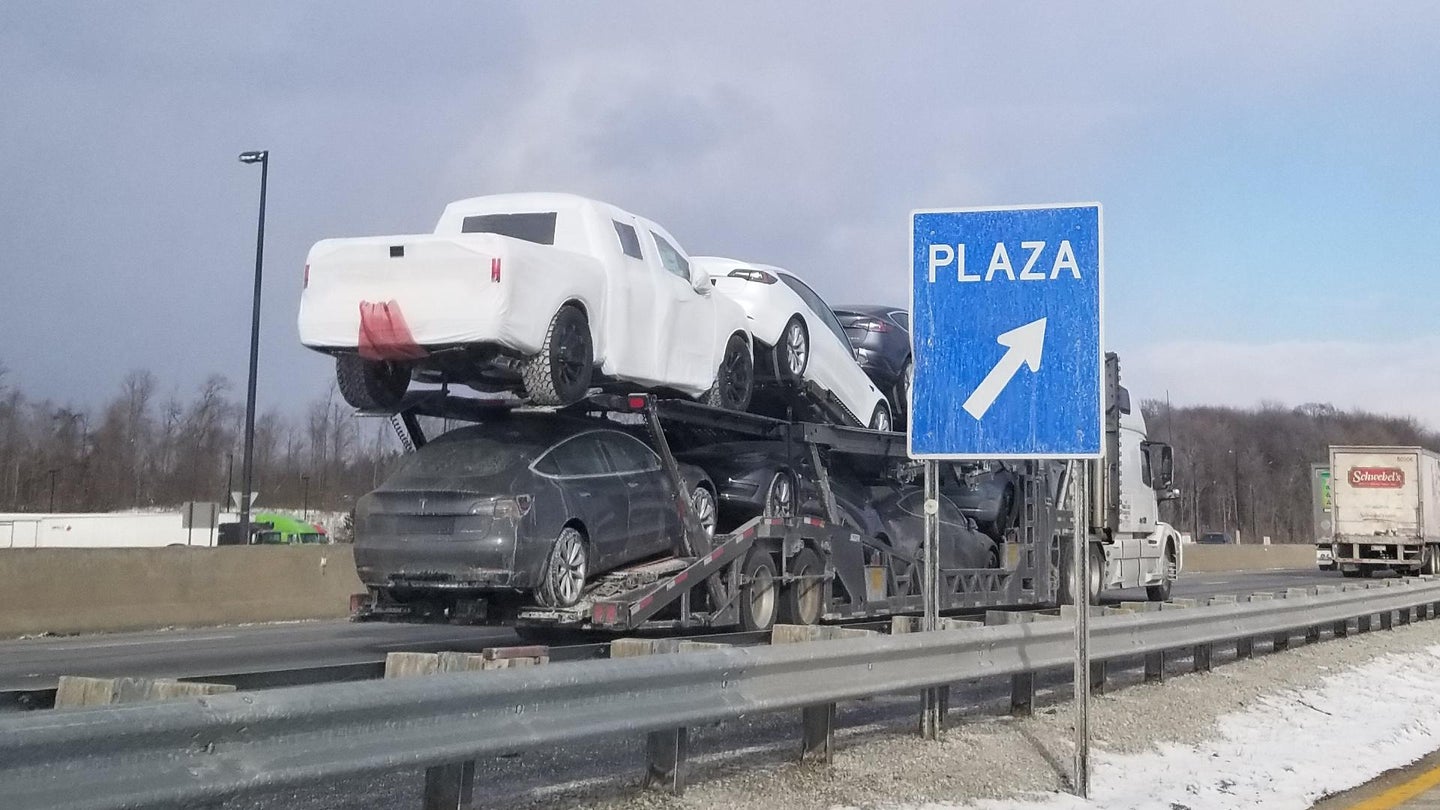 A tractor-trailer carrying a load of Tesla Model 3s traveling through eastern Ohio caught the eye of a keen Redditor on Wednesday. The user, who snapped a picture of the vehicle's trailer, noticed a particularly interesting truck on the load full of EVs, bringing the TeslaMotors subreddit into a question-asking frenzy.

Immediate speculation jumps to the truck being one of Tesla's test mules. CEO Elon Musk promised that the truck would be "something quite unique, unlike anything else," meaning that the quite ordinary design of the pickup isn't likely to be a finished product.

And from what we can tell, it's not. Based on a few clues, the truck appears to have at least began life as a Roush F-150. The body lines and tailgate angles match up with the current-generation pickup and the wheels are a direct pull from the vehicle. The Roush also has the same dual exhaust tips featured in the rear as opposed to the stock F-150's single-tip. Tesla does use F-150s for its fleet trucks, however, that doesn't explain the presence of the wheels, nor the absence of fender flare, nor the protective wrapping used to protect or camouflage the vehicle. EV manufacturer and future competitor Rivian had a similar idea when it began testing its trucks under the farce of an F-150 body.

It would also be imprudent for Tesla to use such an expensive truck as a fleet service vehicle, raising the question of why the truck is on the carrier with the lot of Model 3s, especially when the vehicle is close enough to be teased over the summer.

A few hours west of the spotting lies the Transportation Research Center in East Liberty Ohio, a facility which is shared by automakers looking for an independent location to perform vehicle testing. The National Highway Traffic Safety Administration's (NHTSA) Vehicle Research and Test Center laboratory is also located on-site at the TRC, the facility in which the regulatory body uses to evaluate and test vehicles and components in accordance with Federal Motor Vehicle Safety Standards.

Another interesting note to make is that each visible Model 3 trunk in the photo is equipped with a European registration plate holder. It's not clear why the vehicles were headed to the midwest, nor why the vehicles had the Euro-standard plate holders. Perhaps they were headed to the NHTSA's test facility alongside a test mule pickup or maybe some reverse engineering at the TRC.

Or, perhaps, it was just a lone F-150 along for the ride. It just seems like quite the coincidence that the truck would happen to show up with a bunch of European hardware Teslas close-by a vehicle testing center while the automaker is working to build a pickup immediately after its upcoming Model Y, which is due to be unveiled next week. Speculate away.