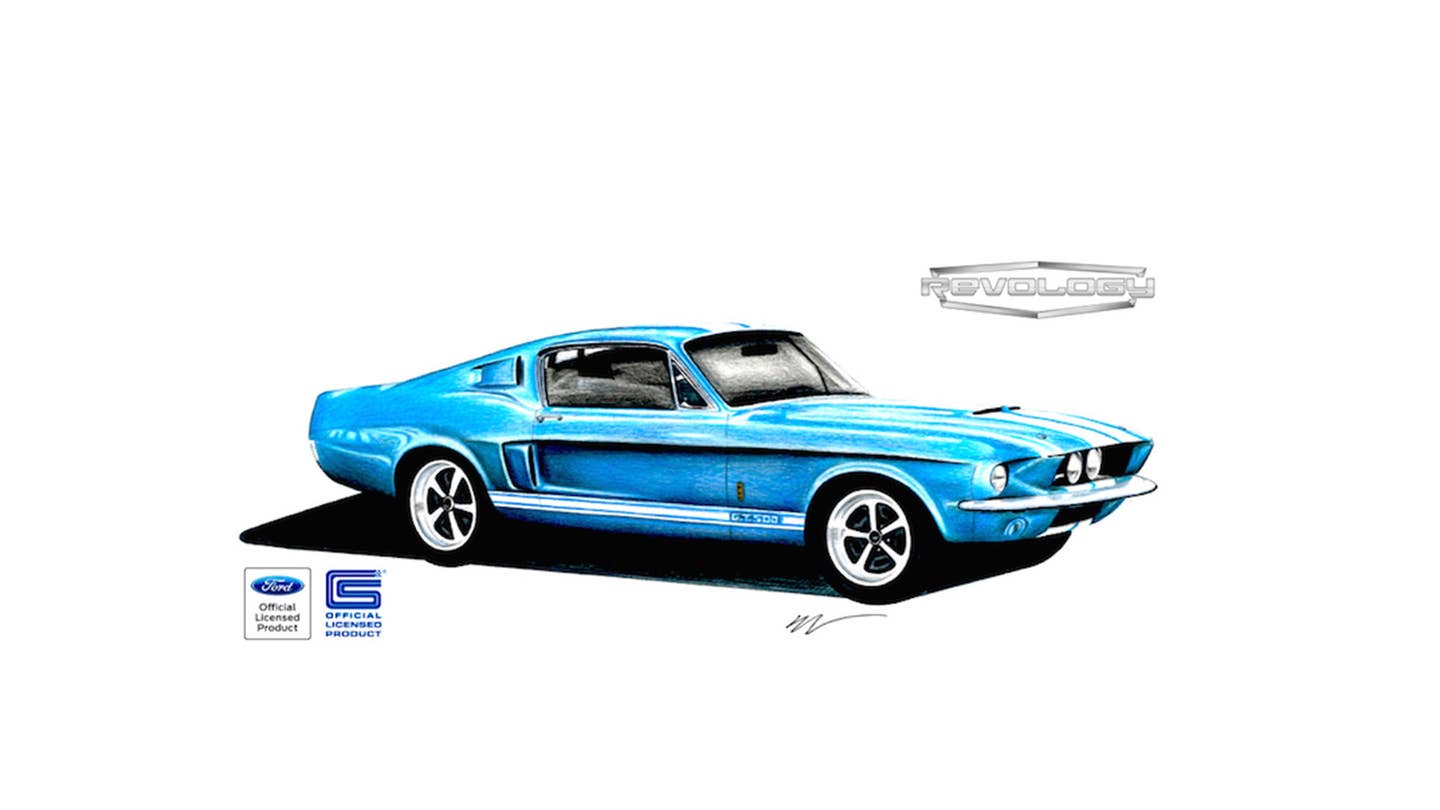 Revology Cars, the Orlando, Florida-based maker of classic Ford Mustang replicas, has announced it imminently intends to begin building a redux of the beloved 1967 Shelby GT500 Mustang. But while the new Mustang will look every bit original outside, beneath the skin will be another story

Details are wanting at the moment, but one feature that's for certain is the 5.0-liter, 435-horsepower Ford-made “Coyote” V8 that will sit under the hood—the same lump powering the current Mustang GT. The engine’s reduced displacement compared to the original Cobra Le Mans 428-cubic-inch V8 comes with a salubrious power increase, though, as the sixties icon growled out just 355 horsepower. The scale brings more good tidings: Revology’s newest Mustang is expected to weigh in about 550 pounds lighter than a modern Mustang GT.

Based on Revology's past works, it's possible to infer a little more about the new GT500. There’s a good chance a five-speed Tremec transmission will be the standard transmission. MacPherson front suspension and a three-link live-axle rear suspension will likely handle the handling, and six-piston front and four-piston rear brake rotors should hide under the officially licensed Dynacorn fastback body. If the option sheet for the Revology GT350 is a reliable guide, a six-speed manual and four-speed auto will also be on offer, plus a buffet of infotainment features and enough leather to make the Marquis de Sade gasp.

Revology says a $10,000 fully refundable deposit will secure a place in line for the new GT500. Final pricing is one of those redacted line items for now, but we’re told the GT500 will be priced similarly to the company’s GT350 models that start at $158,250. Comparison shoppers take note: Hagerty values an original GT500 in excellent condition at $163,000, but that assumes you can find one of the 2,048 original GT500s actually up for sale. The fastback coupes should appear sometime in summer 2017; as each one will be officially licensed by Shelby American, every Revology GT500 will be documented in the Worldwide Shelby Registry.

You might know the original 1967 Shelby GT500 as Nicolas Cage’s most memorable love interest, post-Valley Girls: Eleanor, the modified Mustang from the Gone in 60 Seconds remake. Developed as a classier and more mature evolution of the “rough-riding bronco” that was the GT350, the GT500 was still hard to handle. As Car and Driver put it at the time, you needed “biceps like [NASCAR driver “Fast”] Freddie Lorenzen” to control it; it wasn’t that comfortable inside; and it didn’t perform that much better than a stock Mustang. Ford only made it for two years, then sold the unsold 1969 production as re-numbered 1970 models.