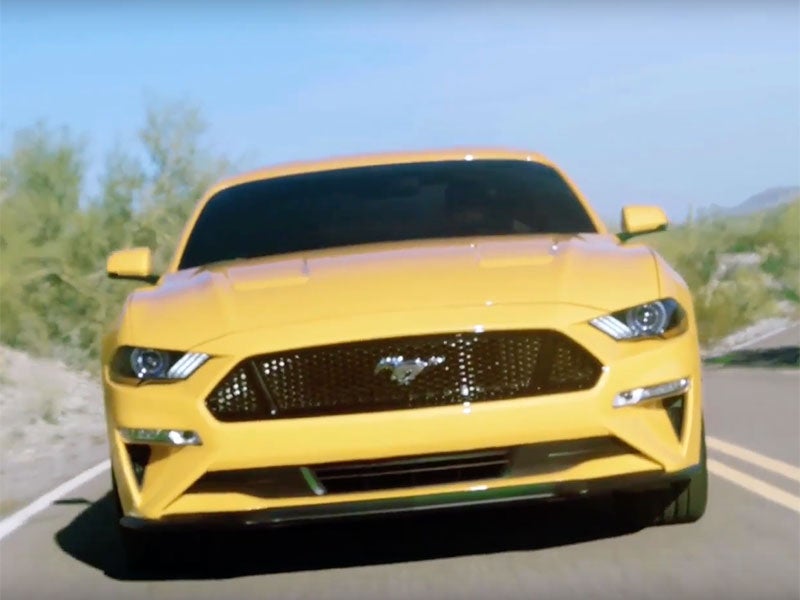 The Ford Mustang was America's best-selling muscle car last year, but you wouldn't know it by looking at the facelifted 2018 model that leaked onto the web yesterday. In fact, based on our first look at the mid-generation refresh in the footage below, we'd say the next Ford Mustang appears to have the clenched squint of Clint Eastwood staring into the sun.

The footage, which appears to be promotional B-roll video shot by Ford, was posted to YouTube by the avid pony car enthusiasts at Mustang6G.com, depicts what appears to be a 2018 Ford Mustang GT with the Performance Pack. The front fascia seems to have decided to go for a more European look than the original face of the sixth-gen model; the headlights have shrunken down, the LED running lights now sit awkward;y above triangular air intakes, nd the slimmer front splitter has inverted its direction, growing wider instead of narrower as it descends towards the ground. We hate to say it, but the over effect makes the new Mustang look a little more like (gasp!) the Camaro SS. (Which is something of a shame, as style was the one place where we at The Drive generally agreed that the 'Stang had the edge over the Chevy.)

Out back, the biggest change appears to be a large new spoiler of the sort that splits the difference between the old Mustang's subtle lip and the Nissan GT-R's wing; otherwise, the shark-gill taillamps, muscular fender flares, and rear diffuser all appear more or less the same as the outgoing model, though it's hard to tell for sure from the video.

Based on the silver badges on this pony's flanks, it seems the 2018 Mustang GT will stick with the 5.0-liter V8 it's been using for the better part of a decade, though presumably tweaked to squeeze a few more horses out of it than the current 435-horsepower output. An EcoBoost four-cylinder version is almost guaranteed to accompany the car at launch, though rumor has it the V6 model may finally be put out to pasture. We predict the beloved Shelby GT350 version will return, possibly offering a dual-clutch transmission; a Shelby GT500 packing Hellcat-riavlling power is all but certain, as well.

As Ford didn't reveal the car at the North American International Auto Show last week, we're guessing the car will make its world debut at the New York Auto Show this spring. After all, NYC was where the Mustang was first revealed back in 1964.  Then again, based on that new front end's European appearance, we wouldn't rule out a shocker of a Geneva Motor Show debut, either.