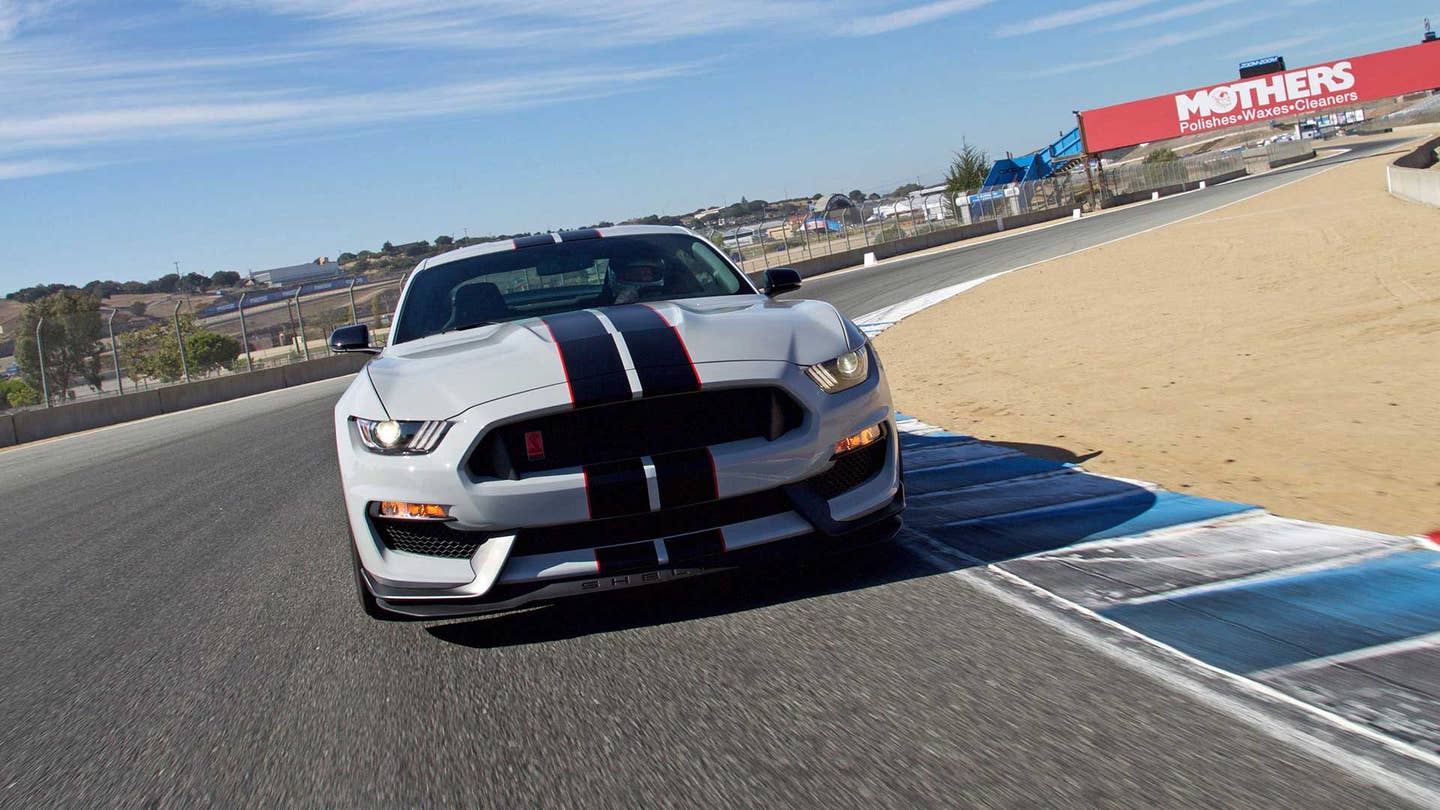 There are but a few perfect moments in life. All your senses become electrified, and you feel like you can see the world and where you fit into it with immaculate clarity. This moment is called ecstasy.

I experienced it recently. I was diving down the famed Corkscrew into a high-speed, left-hand sweeping bend at Mazda Raceway Laguna Seca, in Ford’s new Mustang GT350. It wasn’t just the car that made the experience. (If you’re looking for a straight car review, skip to the last few paragraphs.) It was more than that. All the elements conspired to deliver the joy of motoring in its purest form.

Let’s start with Laguna Seca. This track has everything: 180 feet of elevation change, plenty of flat out speed and every kind of corner, including a couple high-speed blind heart-stoppers. Even more importantly, however: This track has a romance about it. Its story harks back to the early Fifties, when a road-racing revolution occurred in California. All over the state, organizers were holding competitions of speed on public roads, notably at Pebble Beach, where the Concours d’Élégance is today. “Craze on the Coast,” the Los Angeles Times called it in 1958, noting the humanis Californianus’s peculiar “mania” for sports cars, a kind of auto that hitherto did not exist.

At some point, fans realized that speeding Jags and MGs through narrow tree-lined public roads could be dicey. And so, locals in the Pebble Beach/Monterey area scraped up $1.5 million (a lot of money back then) to build a racetrack. They named it Laguna Seca, after the Spanish for "dry lake." Over 65,000 spectators turned up for the track’s opening races, November 9-10, 1957. Among the drivers that weekend: Carroll Shelby, driving a 3-liter Maserati (he came in third).

Today, the track is most known for its glorious Corkscrew, corresponding to Turn 8 and Turn 8a. The latter is the real money shot. You could hurl a minivan down this roller coaster and have the time of your life. But it’s better if you’re driving something special.

Which brings us to the car. The GT350 is an American icon. The original was the first collaboration between Carroll Shelby and Ford Motor Company in the production of a Ford automobile (not a “powered by Ford” car, but an actual Ford).

The first (non Shelby) Mustang was unleashed on April 17, 1964. The car became an instant pop culture sensation the moment Lee Iacocca and his boss, Henry Ford II, unveiled it at the New York World’s Fair. About 22,000 orders came in the first day. As the story goes, Iacocca approached Shelby to make a racing version of the Mustang. “Can you do it?” Iacocca asked. “I don’t know,” Shelby answered. “It’s a secretary’s car.” Today, Carroll Shelby is, for most, a household name. Back then, he was a wild card, and he made everyone in the Ford offices a bit nervous.

On January 27, 1965, Ford unveiled the Shelby Mustang GT350 at a press conference at Riverside Raceway, in southern California. The 350 was a random number; it just sounded cool. The car was a stock Mustang fastback modified at Shelby American in Venice, California. Shelby’s team used a race-tuned 289-cubic inch V8, a four-barrel Holly carburetor, four on the floor, disc brakes at the front and a host of other performance-enhancing modifications. The tag: $4,311. Bear in mind that the base stock Mustang was going for about $2,400. Here there was no radio, no backseats. That first year, 2,889 GT350s hit the streets, plus 34 GT350R’s, in all-out racing trim (close to $6,000). Road & Track called Shelby’s GT350 “a brute of a car… There’s nothing subtle about it.”

An original ’65 GT350 in good condition now will run you hundreds of thousands. Can’t afford it? No worries. Fifty years after the original appeared, Ford is unleashing an all-new iteration worthy of similar appreciation.

For starters, the new GT350 is visually impressive. I’ve never been a Mustang fan aside from the Sixties cars, but this thing’s styling is well-executed and true to the DNA of the original. The entire package was redesigned to deliver better airflow with a lower center of gravity. Everything from the windshield forward is unique to this car, with the hood standing two inches lower than on the base Mustang and the front fenders more pronounced to accommodate a wider front track. The grille was resculpted with a more shark-face look, with the Shelby logo sitting small and understated off to the side.

As for oomph, the car’s engine is nothing less than the most powerful naturally aspirated Ford production engine of all time. The song of the 5.2-liter V8 could make for a hit single if iTunes would only stream it.

When you drive the car on both the road and the track, you sense instantly that the Shelby succeeds in doing what almost all sports cars today are meant to do: idle gently for smooth commuting, and roar in race mode for track days and the occasional police chase.

Motoring press has gone nuts for the new car’s flat-plane crankshaft V8. A quick explanation: Flat-plane cranks can deliver higher performance and greater efficiency than cross-plane crankshafts, which are the norm. However, they cause all kinds of problems, particularly harsh vibration and excessive noise. Flat-plane cranks are often used in race cars, since noise and vibration is to be expected. But road cars? Ford engineers managed to solve all the problems to get the performance out of a flat-plane crank without the annoyance. Here’s how the company puts it: “Unlike traditional V8s, where the connecting rods are attached to the crankshaft at 90-degree intervals, this design evenly spaces all crank pins at 180-degree intervals to optimize high-speed engine breathing.”

For me, the best thing about this car is the ease with which you can drive it fast. Its torque curve is vastly forgiving. Power is available at low revs all the way to the 8,250 rpm redline, with peak power at 4,750 rpm. Point: You can do a lap at a good clip around Laguna Seca without ever shifting out of third gear, if you choose. And the suspension is by far the best I’ve experienced on a Mustang, meaning you can put power to the ground with stability and confidence. Like all muscle cars, the Mustang has always been great in a straight line, but less so in tricky corners. Not so anymore. The updated suspension tech includes magnetic dampers usually found on more expensive cars (dampers are filled with a hydraulic fluid that's been shot through with iron particles; an electric charge, caused by braking, alters the stiffness of the ride according to what the wheels need at a given moment, thus giving you improved footing in tracklike conditions).

Should you buy this car? You’ll have a hard time finding more fun for the price: a nick below $50,000. In fact, you’ll have a hard time finding a GT350 in 2015, as only 137 will be built. (Series production will increase next year.) The R version is even better, with more race-tuned suspension settings and a bigger rear spoiler, though at $63,495 it also does a pretty good job of stomping all over the Shelby's value proposition.

In the end, it is a Mustang, not a $250,000 McLaren. So if you want to experience true ecstasy, you need to add to the experience. Take it to Laguna Seca, where you’ll be racing three abreast with the ghosts of your heroes, and phantom crowds will be on their feet and too breathless to call out your name. If a car and a racetrack can resurrect the spirit of automania at its mid-century heights, the GT350 and Laguna Seca together get the job done.