Based on simulations, it's expected to be the fastest street circuit in F1 history. 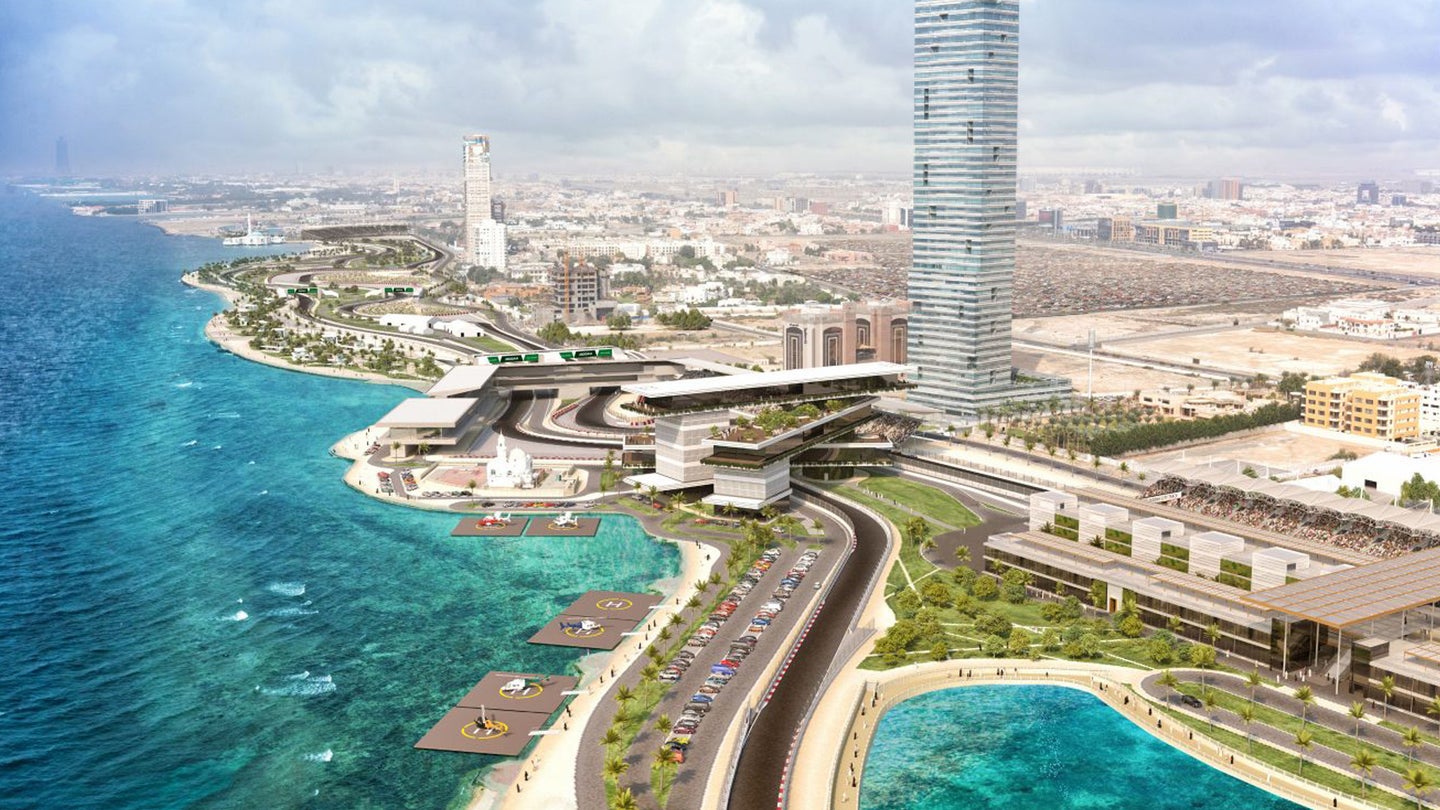 Last year F1 announced it was heading to Saudi Arabia after a season-long tie-up with oil producer Aramco occupied the advertising hoardings around empty grandstands. There'd been rumored discussions with teams over the idea as early as 2019 and even some pretty wild mockups of cars driving under rollercoasters at a proposed Qiddiya track, which promised to beat even Spa-Francorchamps to the longest on the calendar.

Jeddah, the Kingdom's second-largest city, emerged as the host for the inaugural Grand Prix. The decision was taken to run a street circuit there before a permanent circuit could be built elsewhere; Jeddah was pretty much the only choice, as although it's smaller by population than capital city Riyadh (which hosts Formula E), it's much more geared towards tourism and so had hotel capacity to host F1 as well as the larger international airport. Although you might associate Saudi Arabia more with the desert than the beach, Jeddah is coastal and so the 3.84-mile long circuit will be squeezed between glass towers and the Red Sea.

The track is long—it's only beaten by Spa on the 2021 calendar, and it's over half a mile longer than its closest street circuit competitor, Baku. Clocking in at nearly four miles is substantial enough but the long straights and flowing sections necessitated by being, basically, a squishy up-and-down, mean it's also set to be really, really fast.

F1 itself reckons the previous fastest street circuit was Spa's old layout before it was made into the year-round facility it is today, which Chris Amon allegedly lapped at an average pace of roughly 151 miles per hour (244 kilometers per hour) in 1970. From what's been simulated for the Jeddah track, it's expected to have an average speed of around 157 mph (252.3 kph) on a flat-out lap.

That's still a ways off from Lewis Hamilton's qualifying lap at Monza last year where he maintained an average speed of just over 164 mph (264.363 kph).

F1 is slightly generously managing to count 27 corners, quite a few of which it seems seriously doubtful would even register as one in today's high-downforce cars. Given 130R at Suzuka is now a straight and Eau Rouge is completely flat-out, it seems extremely optimistic that turns 3, 11, 12, 14, 15, 18, 19, 20, 21, 23, 24, 25 or 26 would register as such—at least, on a permanent circuit. Depending on what track is laid at Jeddah, though, cars could have a lot less grip than we'd expect from a grade one track, especially because it's, well, on the beach so both sand and wind will be persistent issues.

It'll be physically and mentally grueling for the drivers at those speeds, especially since Jeddah is notoriously humid, even in November when the race is set to happen. Although it's cooler than much-shorter, much-slower Singapore, it's not actually by very much; the average temperature in Jeddah in November is 91 degrees Fahrenheit and humidity is usually around 70 percent, providing brutal conditions for laps at that pace. By comparison, Singapore's lap record average speed is 111 mph (179 kph).