While IndyCar's race at the Brickyard was marred by chaos, hard-fought competition highlighted F1's virtual Grand Prix at Interlagos. 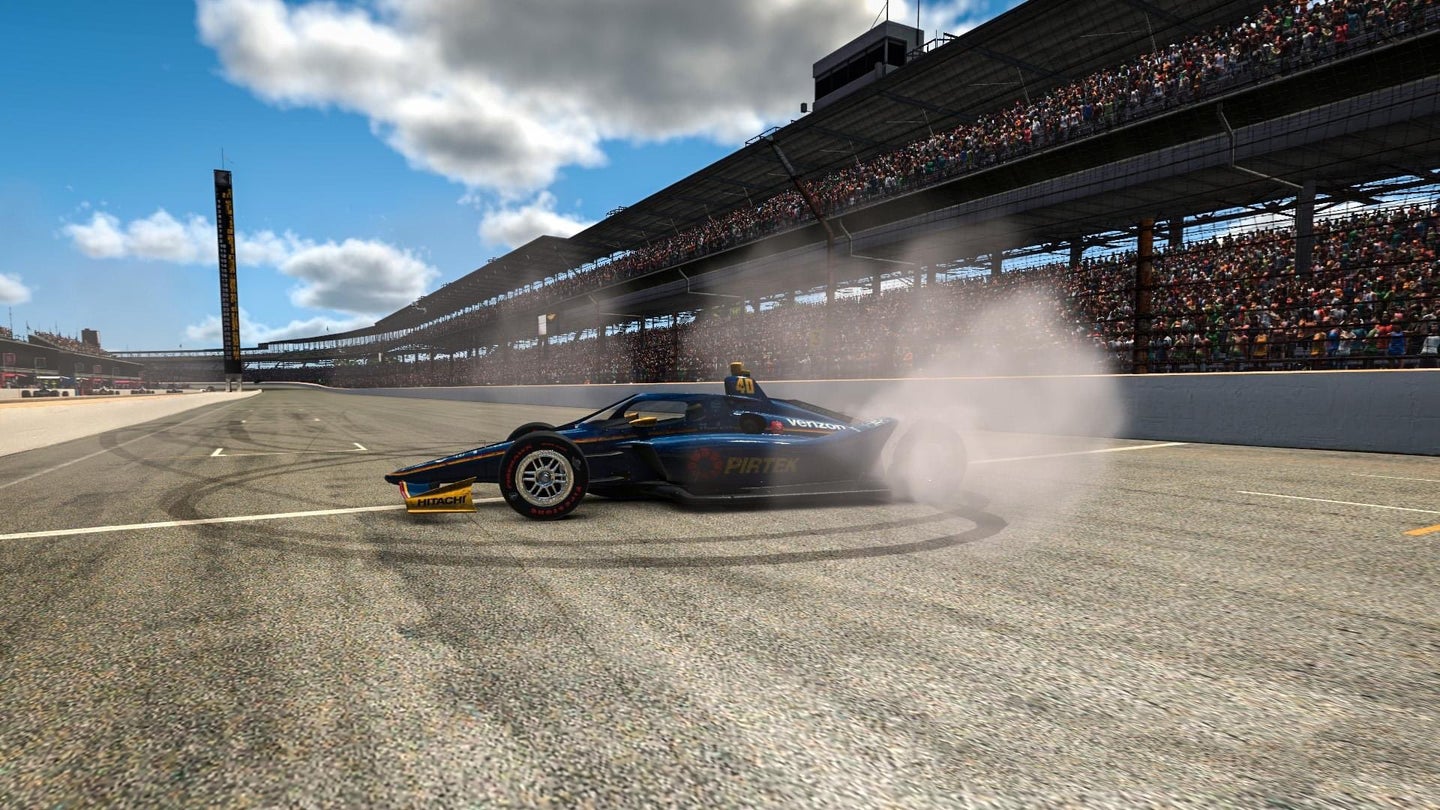 Real-world drama has somehow found its way into almost every weekend of sim racing during this makeshift motorsport season. Some have been more serious than others, of course, but this past Saturday and Sunday were no exception. Intentional wrecks have always been a persistent issue in iRacing and every other sim platform, but they played a major hand on the main stage of IndyCar's short-format virtual championship finale. Meanwhile, F1's simulated Grand Prix at Interlagos saw an epic head-to-head battle between two of the sport's brightest up-and-comers.

Here's the breakdown of everything you might've missed over the weekend.

McLaren Formula 1 driver Lando Norris returned to the IndyCar iRacing Challenge series this weekend in hopes of gaining his second consecutive win. He swept the field from pole at Circuit of The Americas and was on-track to do so again at Indianapolis Motor Speedway, this time starting in second. However, with two laps to go, he was wiped out by a slow-moving Simon Pagenaud who had intentionally blocked him from advancing past him.

We gave the full story here, but rest assured that Norris wasn't happy following the incident. And neither was his Arrow McLaren SP teammate Oliver Askew, who was crashed into by Santino Ferrucci just before the finish line, ruining his shot at a race win.

In the end, it was Team Penske driver and polesitter Scott McLaughlin who lucked into the win. The Kiwi actually ran out of fuel earlier in the race but clawed his way back to the front, putting him in the best possible position when Askew and Ferrucci collided.

Ferrari's Charles Leclerc had won back-to-back virtual Grands Prix heading into Sunday's contest at Interlagos. However, his winning streak would end at two courtesy of Red Bull driver Alex Albon's performance which included an epic head-to-head throughout. Both of the young drivers have tested each other throughout the handful of sim races thus far, bouncing from Bahrain to the Chinese Grand Prix circuit ahead of this weekend's bout in Brazil. Alas, it was Albon's time to shine in his Honda-powered No. 23 racer.

Polesitter and Mercedes-AMG test driver Stoffel Vandoorne botched the start and drug several cars along with him to the wall, allowing Albon an opportunity on Lap 1. There were many more lead changes, though, with Leclerc nudging his way to the front with Williams' Geroge Russell in the mix all the while.

Leclerc and Albon traded places time and again, although the former was dealt a three-second penalty and had to not only overcome the deficit to his opponent but build a sizeable gap as well. The Monegasque youngster was unable to trump Albon and finished behind Russel as well, making for a Red Bull, Williams, Ferrari podium. Didn't think you'd hear that in 2020, did you?

William Byron, as we knew going into the eNASCAR iRacing Pro Invitational series, is a stellar sim racer. He actually built the foundation of his career on virtual competition and now that stock car racing's best are pitted against one another remotely, he's done nothing but impress. This dominance continued for Byron on Sunday as he took his third victory of the Pro Invitational at Dover International Speedway.

The "Monster Mile" brought about results similar to the most recent short-track iRacing bout at Bristol. Byron managed to stave off fellow young gun Christopher Bell of Leavine Family Racing, driving his Hendrick Motorsports No. 24 Chevrolet Camaro to the finish line in P1.

“It was a lot of fun today,’’ explained Byron, at race's end. “Obviously there was a lot of cautions, so I just had to kind of pace myself. It was hard to predict when we were going to get a longer run, so it’s hard to know what to do with the tires in terms of how much to save, whatnot."

With Bell in second, the next spot was occupied by Timmy Hill who earned his fifth top-three result in six races, including a win at the virtual Texas Motor Speedway.

NASCAR will return to real racing, sans fans, at Darlington Raceway on May 17. This'll kick off a stretch of seven races in 11 days as the Cup Series hopes to recover lost time from the coronavirus pandemic.

The all-electric Formula E series is packed with experienced sim racers, putting some at a major advantage over others in the field. BMW Andretti driver Maximillian Gunther is one of those with hundreds of hours of sim seat time, which not only helped him win the first FE Race at Home event but also the second this past weekend at the fictitious Electric Docks circuit.

The high-speed, 3.2-kilometer virtual track was built specifically for this weekend's race on rFactor2, though it would fit right into the series' packed schedule of street circuits. Gunther maneuvered the all-new, 18-turn course with grace, unlike polesitter Stoffel Vandoorne of Mercedes. Vandoorne made a slow start and pulled to the center of the track to maintain position into Turn 1, though he scuffed the wall and dropped to fourth place.

Much like last weekend, Gunther capitalized on this snafu and pulled ahead to a four-second lead by the end of lap one. The German never surrendered the lead, either, as he crossed the finish line an amazing 7.7 seconds ahead of his nearest rival.