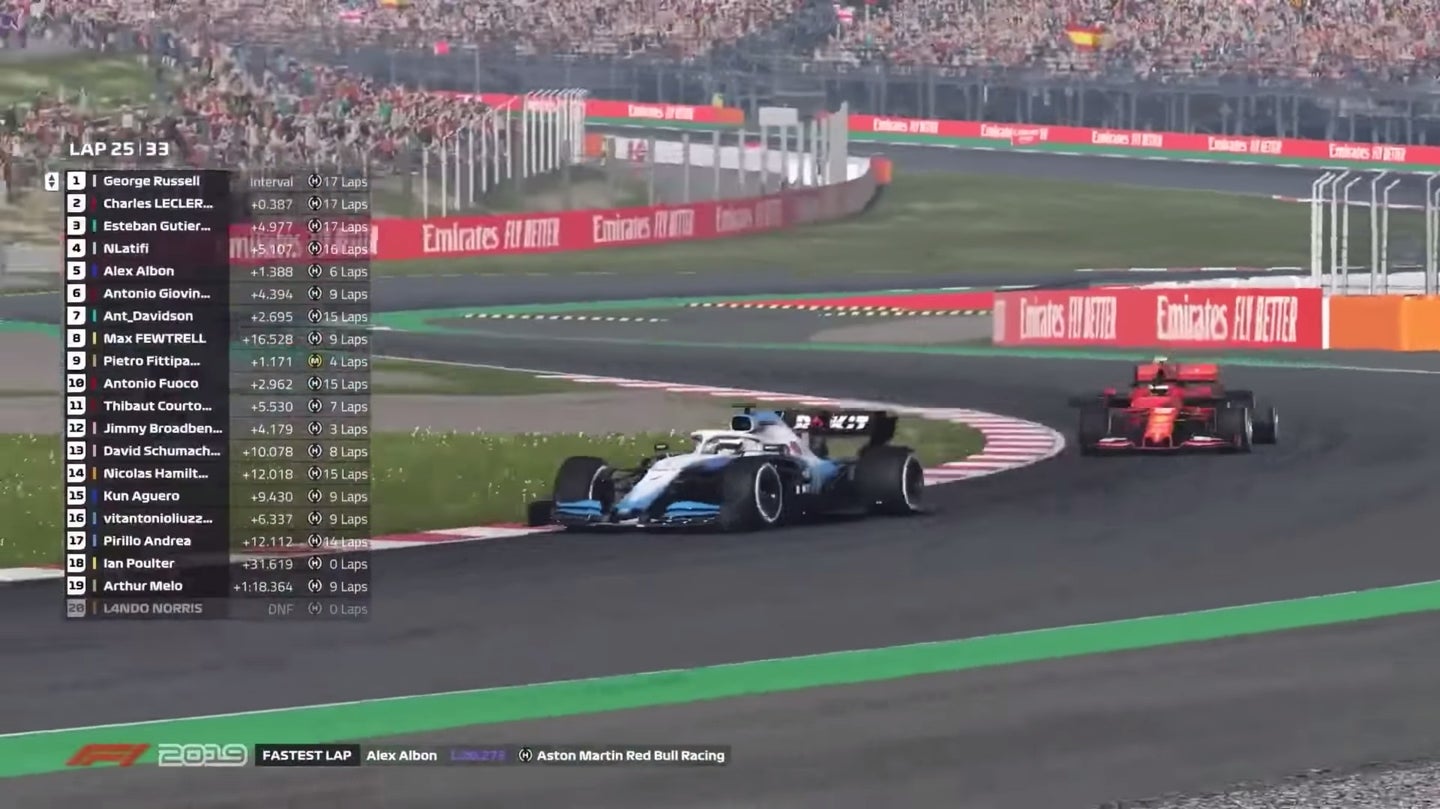 Sim racing stops for nothing—not even Mother's Day. Well, actually, NASCAR scheduled its Pro Invitational season finale for Saturday to avoid Mother's Day and, internationally, it's celebrated on totally different dates. So, maybe that's not the best analogy to use, but either way. There was plenty of racing last week, and we've got the breakdown of the top three contests from May 9-10.

Anything is possible in sim racing, like wrecking and flying into outer space or winning in a Williams Formula 1 car. That last bit might sound far fetched, but it actually happened for George Russell, who took home the virtual Spanish Grand Prix victory on Sunday. The ace Mercedes young driver was able to outduel Ferrari's Charles Leclerc, as well as reigning race-winner Alex Albon of Red Bull.

Russell started from pole position, though a frantic sprint to turn one switched the order up almost immediately. The Brit managed to stay toward the front, nipping at Leclerc's heels as the Tifosi's hero dealt with lag. This allowed the Williams to gain 1.5 seconds in short-order, pushing in second place. However, amidst looking to make up time wherever possible, Russell was handed a three-second penalty for cutting the corner at the final chicane.

The 22-year-old driver thought that might be the final blow but, on the last lap, Leclerc was dealt a penalty for the exact same action. He was unable to build a large enough lead to Russell at the race's end, helping him to win his maiden virtual Grand Prix at the Circuit de Catalunya. It was earned by far more than a lucky penalty, though, as Russell strung together a series of heroic moves to keep him in contention throughout.

For 47 years, North Wilkesboro Speedway was a staple of the NASCAR Cup Series schedule. Primetime stock car racing would return to the North Carolina short oval time and again, putting on a show in the series' homeland. But since the track officially closed in 1996, it's been—more or less—a ghost town. The eNASCAR iRacing Pro Invitational fixed that on Saturday, though, as a full field of racers packed a laser-scanned version of the track with Denny Hamlin coming away as the winner.

NASCAR is returning to real racing on May 17 as it plans to compete at Darlington Raceway, sans fans. In turn, this past weekend saw the Pro Invitational Series' season finale. It's only fitting, then, that Hamlin won as he was also victorious at Homestead-Miami Speedway, the race which opened up the sim racing series a few months back.

Hamlin wasn't particularly dominant throughout; in fact, he managed to drive to the front after a bump-and-run with Ross Chastain. He forced Chastain out of the groove without wrecking him, catapulting into the lead and staving off previous Pro Invitational race winner Timmy Hill for the victory.

“I can only speak for me, but yeah, sure, I’m way more excited than if I wouldn’t have won,” said Hamlin, who drives the No. 11 Toyota Camry for Joe Gibbs Racing. “Winning the last iRace, the first and the last one, it’s significant. We have millions of people watching. It’s good publicity for my sponsors. It’s good for me and my confidence.

Monaco is a dastardly mistress. Full of glamour, theatrics, and riches, but also devastating when you cross it the wrong way. Luckily for Mahindra Racing's Pascal Wehrlein, he never had to worry about any of that at this past weekend's ePrix. From pole to victory lane, Wehrlein made short work of the famously difficult street course, knocking two-time-defending race-winner Maximilian Guenther off the top step of the podium.

"The start was very important and I’m not sure what happened behind but I saw there was a crash," said Wehrlein after the race. And a crash there was, as it knocked out all but the frontrunners who were able to clear a path to the checkered flag without worries of others pursuing behind, at least for the most part.

Mercedes' Stoffel Vandoorne, who started on pole the previous two races, lined up alongside Wehrlein on the front row and challenged him into the first corner. However, for a third consecutive race, Vandoorne was involved in a turn-one collision as he was bounced by ROKiT Venturi Racing's Edoardo Mortara.

"After that I had a small gap and I just worked to keep the pace," explained Wehrlein. "In the end I was a bit quicker but for me it was quite a straightforward race."

I never knew you could make a victory lap around the millimeter-tight Monaco circuit sound so...mundane.