F1 Wants To Fight Racism. Why Aren't All Its Drivers In?

We can only assume that racism doesn't exist in those drivers' countries. 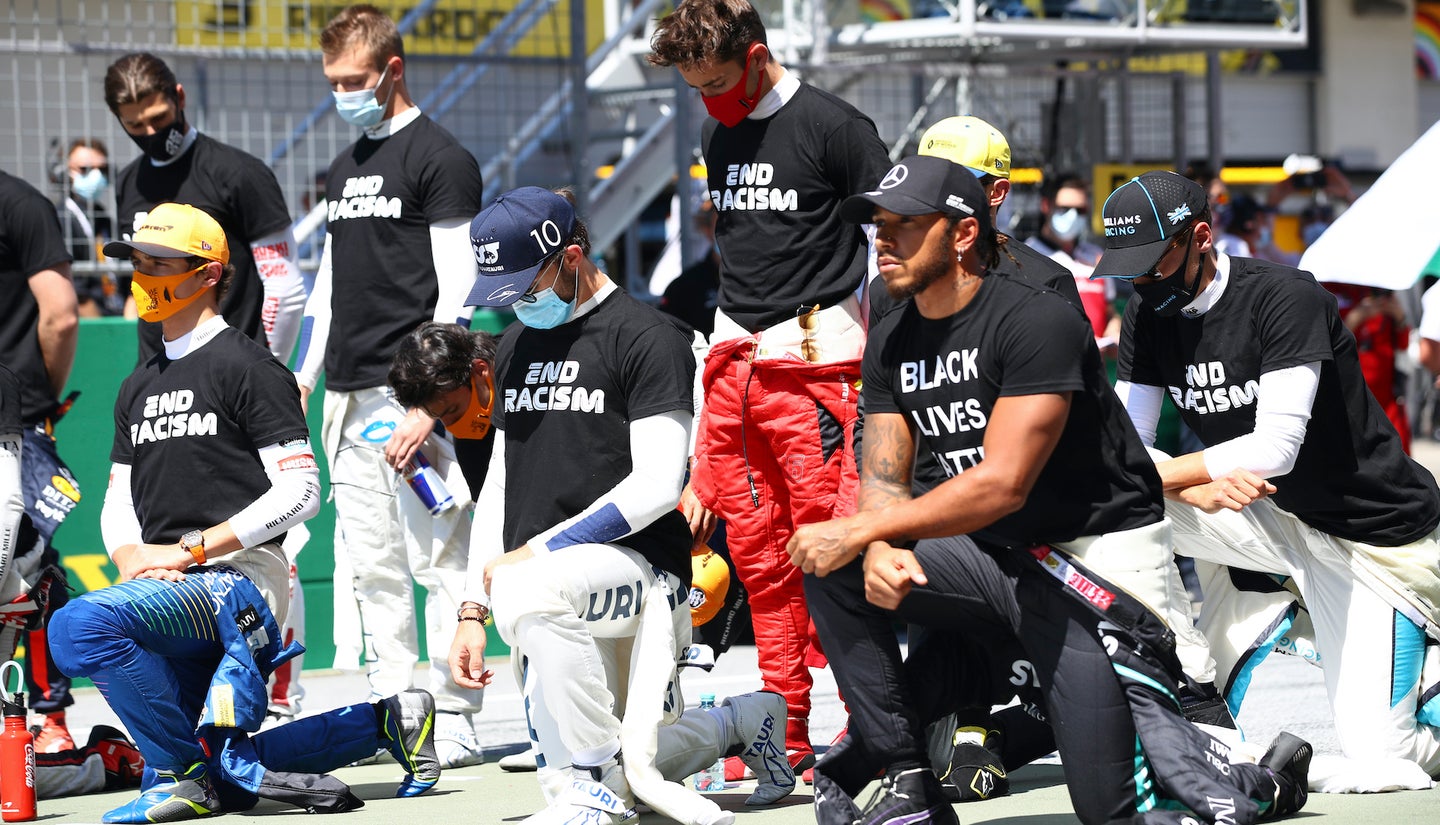 ​Sunday's long-delayed Formula One season opener at Austria's Red Bull Ring was exactly what every fan hoped it would be: exciting, dramatic, and filled with hungry midfielders fighting for the top spot. Normally Australia, not Austria, is the race that kicks the season off, but this race was more exciting than anything we've seen out of Albert Park in years. The Grand Prix itself wasn't the only cause for headlines following the podium celebration, however—several drivers also took a knee during the Austrian national anthem in support of anti-racism movements worldwide.

Led by the sport's reigning champion and most vocal driver, Lewis Hamilton, the field of 20 racers lined up on the starting line where an "End Racism" banner was displayed for the cameras. As a show of solidarity, all drivers wore a black t-shirt reading "End Racism." Hamilton, the sport's only Black driver, wore a modified version reading "Black Lives Matters" in the front and "End Racism" on the back.

When it came time to take a knee, however, not everyone was on the same page, and it made for a somewhat awkward scene on live, global TV. While most drivers, who in total represent over a dozen nations from around the world, got down on one knee along with Hamilton, six of them decided such gesture simply wasn't for them. Ferrari's Charles Leclerc, Red Bull's Max Verstappen, Alfa Romeo's Kimi Räikkönen, McLaren's Carlos Sainz Jr. (who will be a Ferrari driver in 2021), Alpha Tauri's Daniil Kvyat, and Alfa Romeo's Antonio Giovinazzi remained standing.

Started by San Francisco 49ers' quarterback Colin Kaepernick in 2016 to protest police brutality against Black Americans, taking a knee during the United States national anthem has been wildly politicized and controversial. Earlier this summer, F1 launched its own anti-racism campaign. It's not just linked to current events in the United States, such as the killing of George Floyd by Minneapolis police, but to other cases of extreme discrimination around the globe.

With racism being a worldwide problem and not one that applies to just Americans and the Black Lives Matter movement, it was disappointing to see those six drivers decide not to join with Hamilton in taking a knee. While I could understand eccentric mumbler Raikonnen not wanting to have anything to do with issues plaguing America, it's worth noting that Finland very much so has issues accepting Black Finnish citizens, whom some whites think don't fit the mold of what it's like to be a true Finn.

And what about Carlos Sainz Jr., whose motherland, Spain, is known for being quite extreme when it comes anti-Black sentiments? Remember when Hamilton partnered with Alonso at McLaren back in the late 2000s only to receive death threats from Spanish fans comparing him to monkeys? Perhaps Sainz, not wanting to bring the heat to an already moribund McLaren organization led by Californian Zak Brown, decided to stand instead of kneeling. But in doing so, he's ignoring the problems in his own backyard.

If anything, perhaps it's Leclerc, a privileged Monegasque who might've been too sheltered to witness some of the real issues that most people have to deal with across the globe. Not exactly a get-out-of-jail-free card, but whatever. "I believe that what matters are facts and behaviors in our daily life rather than formal gestures that could be seen as controversial in some countries," he said on Twitter.

If Leclerc thinks it's more controversial to take a knee than to show solidarity to people across the globe who have been killed and abused for decades on end, then perhaps he needs to leave Monte Carlo and visit Minneapolis.

"Silence is generally complicit. There still is some silence in some cases," Hamilton said on Saturday when asked about how other drivers and teams have reacted to his pleas for more diversity and overall awareness. Much like Leclerc, Verstappen also felt that one can show solidarity without, err, showing solidarity?

"I am very committed to equality and the fight against racism. But I believe everyone has the right to express themselves at a time and in a way that suits them," said Verstappen on Twitter. "I will not take the knee today but respect and support the personal choices every driver makes."

Needless to say, the responses on social media toward the six drivers who chose to stand weren't exactly pretty.

As we've stated before, the world's second-most-watched sport could flex its muscles and push for real change, just like other institutions including the NCAA here at home have done recently. But in order to do that, it must find solidarity within its drivers, teams, and sponsors in the same way NASCAR drivers rallied around Bubba Wallace when a noose was found in his garage. Or even how the NFL finally admitted that black lives matter. Without that, this kind of divided stunt simply looks like another halfhearted campaign built to appease the media rather than squash the real issue.

With the season's second race happening in Austria again this coming weekend, it'll be interesting to see if the court of public opinion sways any driver to change their mind. Hopefully, there will be fewer folks standing come next Sunday.