This Had Better Not Be a 112-MPH Koenigsegg

Koenigsegg and Polestar are up to something together. 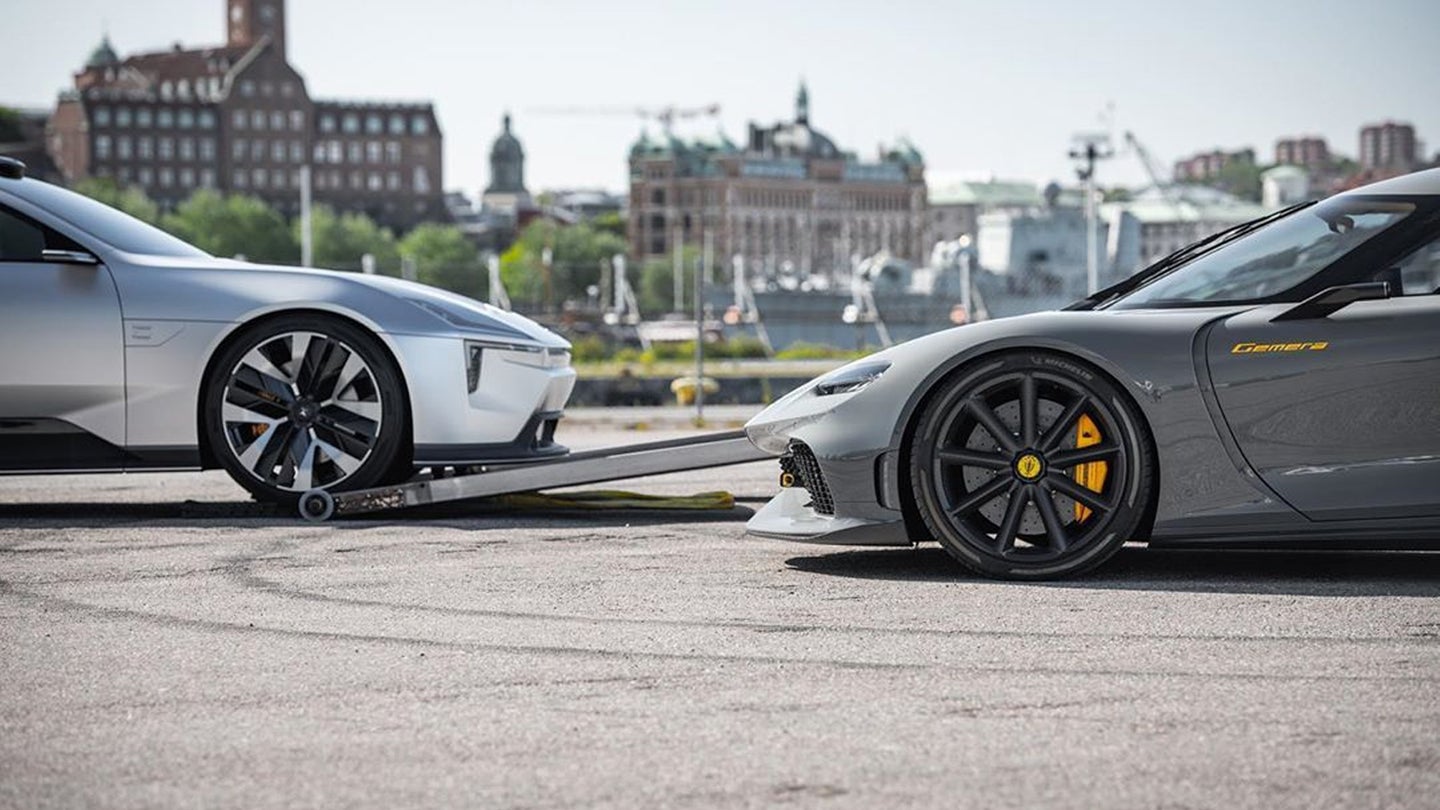 The Swedes are up to something, ladies and gentlemen. In an unexpected Tuesday announcement, electric car brand Polestar and hypercar maker Koenigsegg teased a new partnership via Facebook. And while we won't know for a while exactly what this is, we sure hope it isn't limited to 112 miles per hour. Ahem, Volvo.

News of "something exciting" was announced by both automakers on social media, ringing rumors of a potential collaboration of an unknown extent. Both posts feature the Polestar Precept concept and upcoming Koenigsegg Gemera hyper-GT. We were able to track down the location of the photo to a peninsula near Gothenburg, which puts the pair about six miles from Polestar's HQ.

Polestar created the Precept as a precursor to its upcoming Polestar 3, but more importantly, it's using the opportunity to show the "three pillars" of its brand: Sustainability, Digital Technology, and Design. While Polestar does consider battery-driven performance as being a keystone of its brand, it doesn't explicitly call it out as a focus of the Precept.

Koenigsegg, on the other hand, has one ongoing goal: to enhance vehicle performance. It clearly achieved that with the Gemera, building a 1,700 horsepower hypercar using a twin-turbo three-cylinder engine aided by three electric motors.

"Something interesting is happening on the west coast of Sweden," wrote Polestar in an Instagram caption on Tuesday. This time a different angle of the Gemera and Precept. Both Polestar's home office of Göteborg and Koenigsegg's Ängelholm headquarters are located on the west coast, meaning that there appears to be some sort of collaborative effort going on between the two niche automakers.

You might instantly think of an SUV wearing a Koenigsegg badge. After all, that's the norm nowadays. To think that Koenigsegg might create a family hauler to do battle with Lamborghini's best selling Urus might not seem like the craziest idea, but it's probably not what's happening here (or at all).

"I'm not a big fan of SUVs in general," said Christian von Koenigsegg in an interview earlier this year. "I mean, if you use them for bad road conditions and family cars in general, I have nothing against them, but we're a sports car brand and to me, sports cars and SUVs are two different things. Maybe we'll do some crazy off-road thing that relates to sports cars, but not an SUV."

Perhaps that's what we'll see in the near future: a one-off, off-road style Polestar Precept with a Koenigsegg powertrain. Or perhaps a fully-electric Koenigsegg with Polestar underpinnings will make its way out Polestar's garage. Regardless of what it is, we can't imagine that we'll see a 112-mph speed limit imposed by Polestar's parent company Volvo involved in this trade.