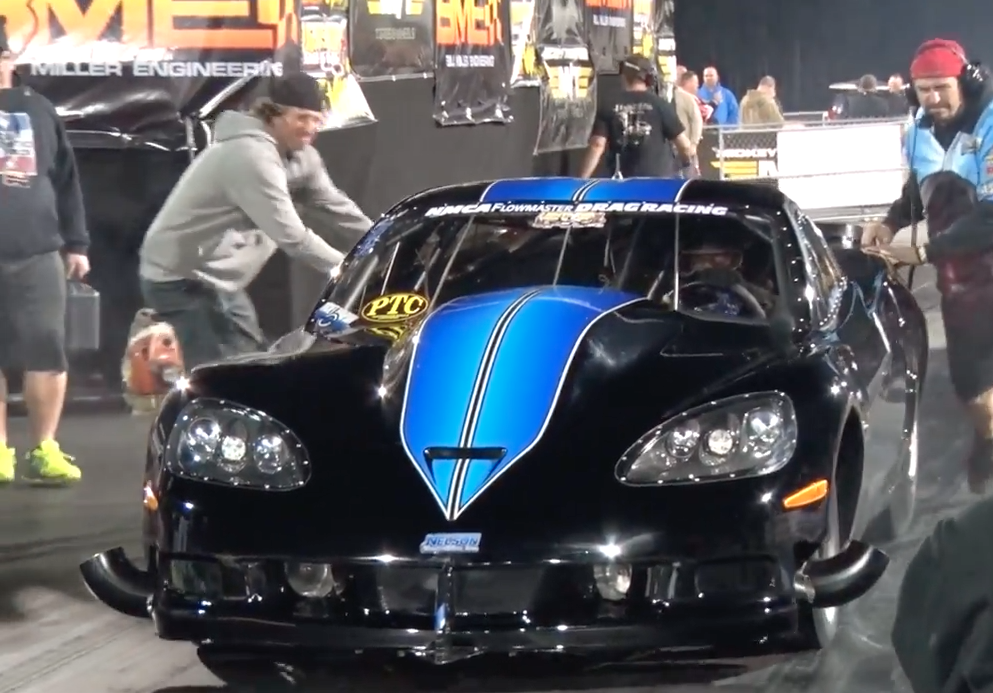 General Motors superfans, the type that were baptized in DEXRON instead holy water, should cover their eyes and ears, because this C6 Corvette uses a Frankenstein combination of a Chevy big block and Chrysler-made Hemi cylinder heads, breathing air shoveled in from a pair of turbochargers. How on earth they discovered that a Mopar cylinder head was the best choice for their Chevrolet engine may never be known, but it isn't the first nor will it be the last time that racers look for that extra tenth of a second by going to other carmakes for parts that more closely fit their needs.

This car competed in the Lights Out 8 event, at South Georgia Motorsports Park, which claims to be the premiere small-tire drag racing series. Competing in the Radial vs. The World class, this car set a world record for a radial tire speed trap in the eighth mile, reaching 212.36 miles per hour at the end of its 660-foot run—before breaking its own record again, later, with a measured speed of 212.69 miles per hour. The car damaged a piston in the semifinal against famous radial drag racer Stevie Jackson, and the pit crew for this Corvette managed to replace the damaged part with only minutes to spare before the cutoff time for their next race.

Oddly, the publishers of the video seem to suggest that this car closely resembles the Corvette's appearance as it left the factory. "There is not much that gives this car away," 1320video claims, "other than the bolted windows, wing, cowl hood and bull horns." Even non-drag enthusiasts can spot the mismatched front and rear wheels, the passenger side dump pipe, and heavily modified front and rear quarter panels, not to mention the plethora of sponsor stickers.

Then again, what does it matter? We get to watch this car literally blow the hood off an unsuspecting Chevy Nova it races against. Remember your hood pins, kids.