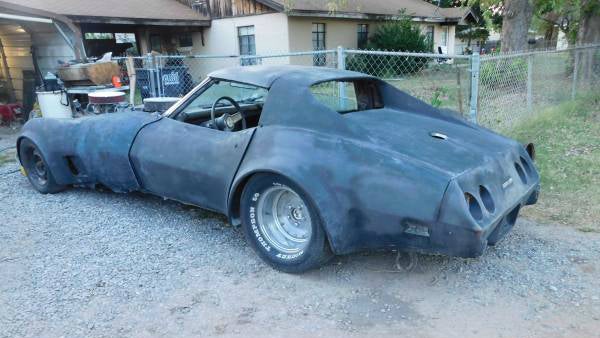 The phenomena of Chevy V8 loyalists deciding they need even more cylinders is nothing new. When even a 9.5 liter, LS-based V12 isn't enough, some turn to the radical step of combining two engines back to back, as one Oklahoma resident did in his stretched 1973 Chevrolet Corvette C3. With a pair of 5.7 liter V8 engines, known to many as just the 350 for its displacement in cubic inches, the power figure in this car could well be north of the 600 mark, provided both engines are the L48, or even a more powerful variant of the GM small-block V8.

A power figure around this level is made further believable by the seller's mention of the car utilizing a Turbo-Hydramatic 700R4 automatic transmission, which they claim to be modified, and capable of taking over 600 horsepower.

The drivetrain was fit into the stretched C3 with the use of an extended-cab frame from an S10 pickup. The fenders themselves were lengthened 26 inches to accommodate the dual V8s, and the hood... seems to have been considered a lost cause. One could imagine the fabrication of longest shaker hood ever devised being used to seal off the engine bay, though opening and closing such a hood could prove a challenge.

We wonder how the builder of this car managed to link the steering wheel to the front wheels, as the wheel and the front axle appear to be at least ten feet away from each other. The power steering is reportedly functional, too.

Listed for sale at $4,500, this may just be the cheapest way of getting supercar levels of horsepower on the planet, cheaper even than a clapped-out old Eclipse with boost turned as high as it will go. Whether the project had to be dropped due to budgetary concerns or loss of interest, the lucky buyer will stand to benefit from the builder's work.

That’s why they make filters, folks.