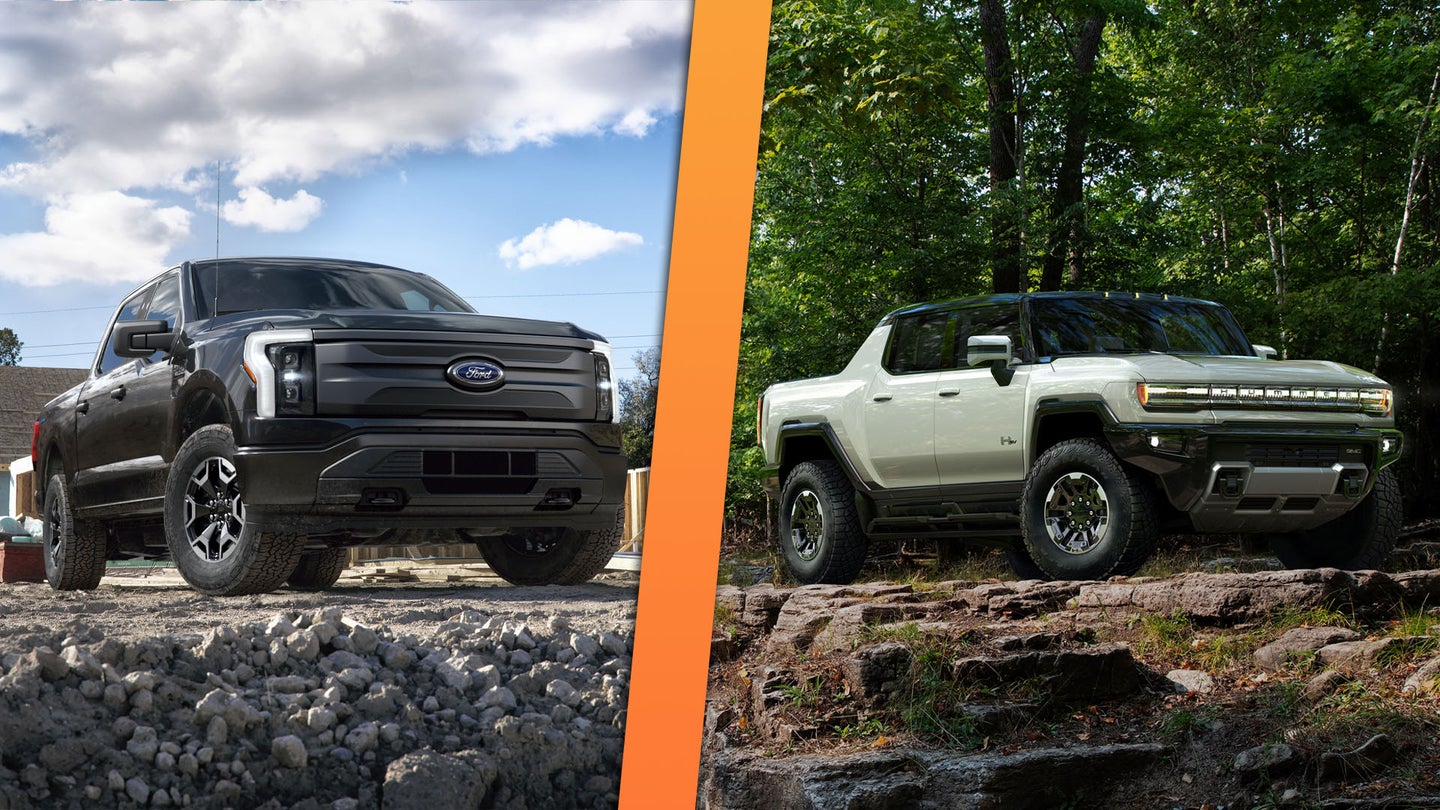 The GMC Hummer EV is really heavy. If you haven't heard already, it's over 9,000 pounds. It's also one of the first EV pickups to reach production along with the Rivian R1T. The Ford F-150 Lightning is set to arrive at dealers soon, but ahead of that, its owner's manual has been released. At a curb weight of 6,590 pounds with the extended range battery, it's much lighter than the Hummer while achieving a similar driving range of 300 or so miles. Why? Well, there are a few likely reasons.

The first is that the Hummer—although the true size of its battery hasn't been formally stated—very likely has a pack over 200 kilowatt-hours. The Lightning's, by comparison, is 131 kWh. Given that there's at least a 70-kWh difference between the two, that's likely where much of the extra weight comes from. Also, for comparison, 70 kWh is a good-sized battery for the average smaller electric vehicle, like the Polestar 2. There's basically an extra car's worth of battery bolted up underneath the Hummer.

The second thing is that the new Hummer currently available for sale is the top-dog "First Edition." It not only features the biggest battery, but also a tri-motor drivetrain. The F-150 Lightning has a two-motor drivetrain and it doesn't have 1,000 horsepower like GMC's beast—it's got "just" 563. Combine the considerable weight of an extra motor plus the fact that they're likely much bulkier to begin with considering the Hummer's output, and the picture starts to clear up.

It's also likely that the Hummer has more body structure than the F-150. Keep in mind the GMC has what is essentially a T-top, which has to affect the body's rigidity. To make up for it, engineers likely had to make the lower portion of the frame seriously strong, or even reinforce the battery casing to keep the stiffness of the chassis adequate. The whole car must also withstand launches to 60 miles per hour—despite weighing over 4.5-tons—in just three seconds. The Lightning isn't nearly as fast as the Hummer, sprinting to sixty in the mid-four second range, a fact we know thanks to President Biden.

None of this mentions the Hummer's extra trail armor, or the litany of technology packed underneath its skin. I can safely say, having driven a prototype of the truck, that the thing has more bells and whistles than any other vehicle I've ever driven. The Ford, with its comparatively utilitarian demeanor, doesn't have a lot of that kit.

To be clear, we'll have to wait and see for more details of both vehicles to come out before we can definitely say why the Ford is so much lighter. But between the third motor in the drivetrain and an extra car's worth of batteries mounted in the floor, there are a few obvious reasons as to why the Ford is the slimmer of the two pickups.

The automaker isn’t interested in customers paying “additional deposits or payments” to dealers.