"She's a big girl... she's not on the Jenny Craig program," the owner says. 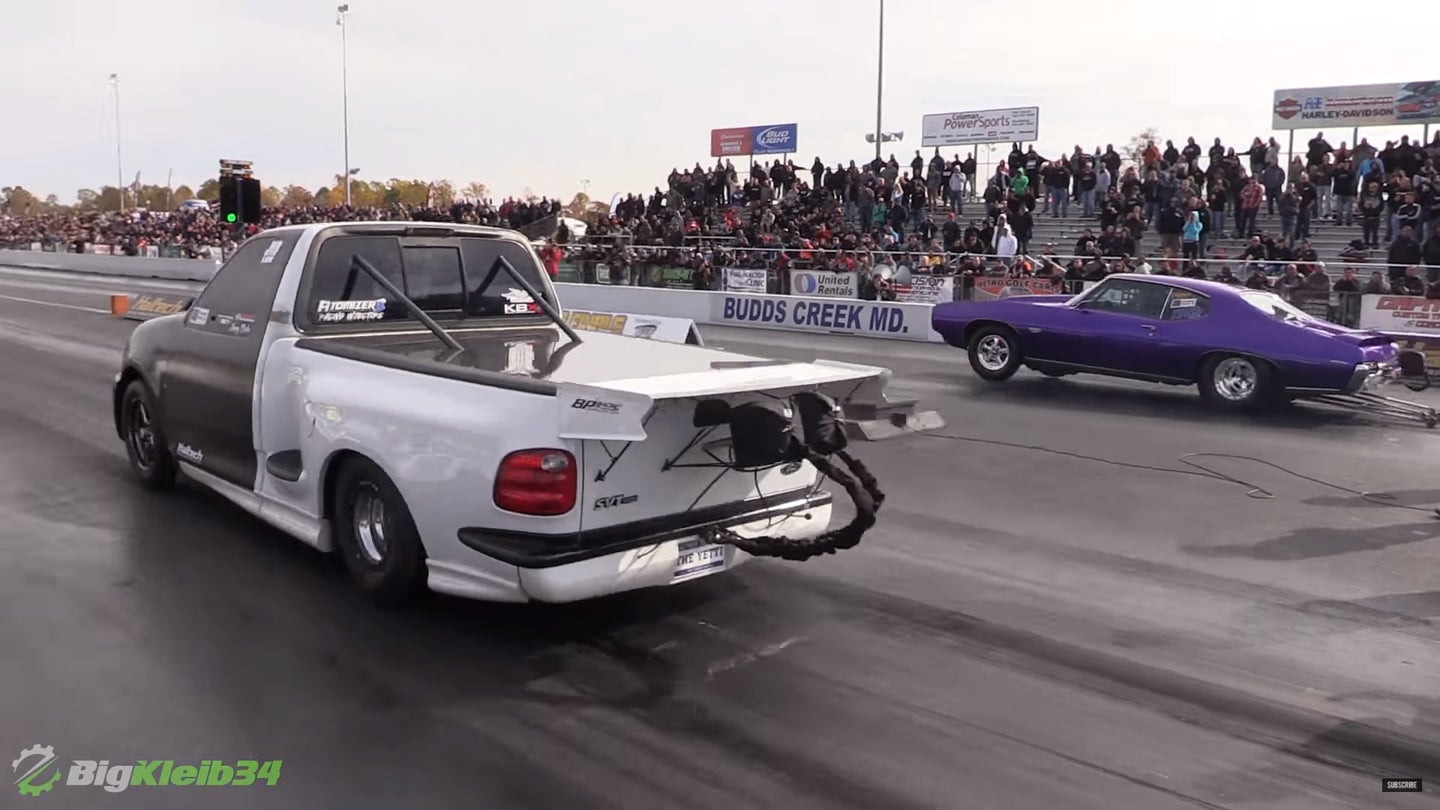 You don't have to be light to be fast. Take the 2018 Dodge Challenger SRT Demon, for example; the much-ballyhooed muscle freak rockets from 0 to 60 mph in 2.3 seconds despite weighing just under 4,500 pounds. Still, it's always a fun surprise to see a big ol' pickup truck dominate the drag strip like this 2004 Ford F-150 SVT Lightning at the annual Haltech World Cup Finals in Maryland last weekend.

The Ford SVT Lightning was a pretty potent package out of the box, though the cast iron block and other old school techniques were showing their age by the end of its run in the mid-2000s. But this 2004 model ditches the stock running gear for a 400 cubic inch Ford small block V8 built by Bennett Racing, a pair of twin 88 mm Bullseye turbos, a turbo 400 transmission from M&M Transmission, custom suspension from Menscer Motorsports, and a gigantic pair of drag slicks out back. The whole thing is good for about 1,900 horsepower at the crank.

YouTuber BigKleib34 caught up with the owner between runs, and honestly, he's one of the most humble, laid-back guys you'll ever see at one of these things. After proclaiming that he's "not too great at this interview stuff," he proceeds to credit his partners and sponsors with the success of the build and lays out all the specs in a pitch-perfect New York accent. Asked if he has any funny stories related to he build, he replies, "Yeah, the only funny story is yesterday my chutes didn't deploy. Not that that's funny, but it's funny now because I was able to get the car to stop."

At 3,400 pounds, it's a lot lighter than a stock truck, but as the owner says, "She's a big girl... she's not on the Jenny Craig program." That doesn't stop it from making short work of the field in the rest of the video, laying down seven-second quarter-miles left and right before finally getting taken down by what looks like a Mazda RX-8-bodied funny car. More impressive than that? The way the SVT Lightning's massive rear tires fit neatly under the flareside fenders. It's like they knew what people would do with them.