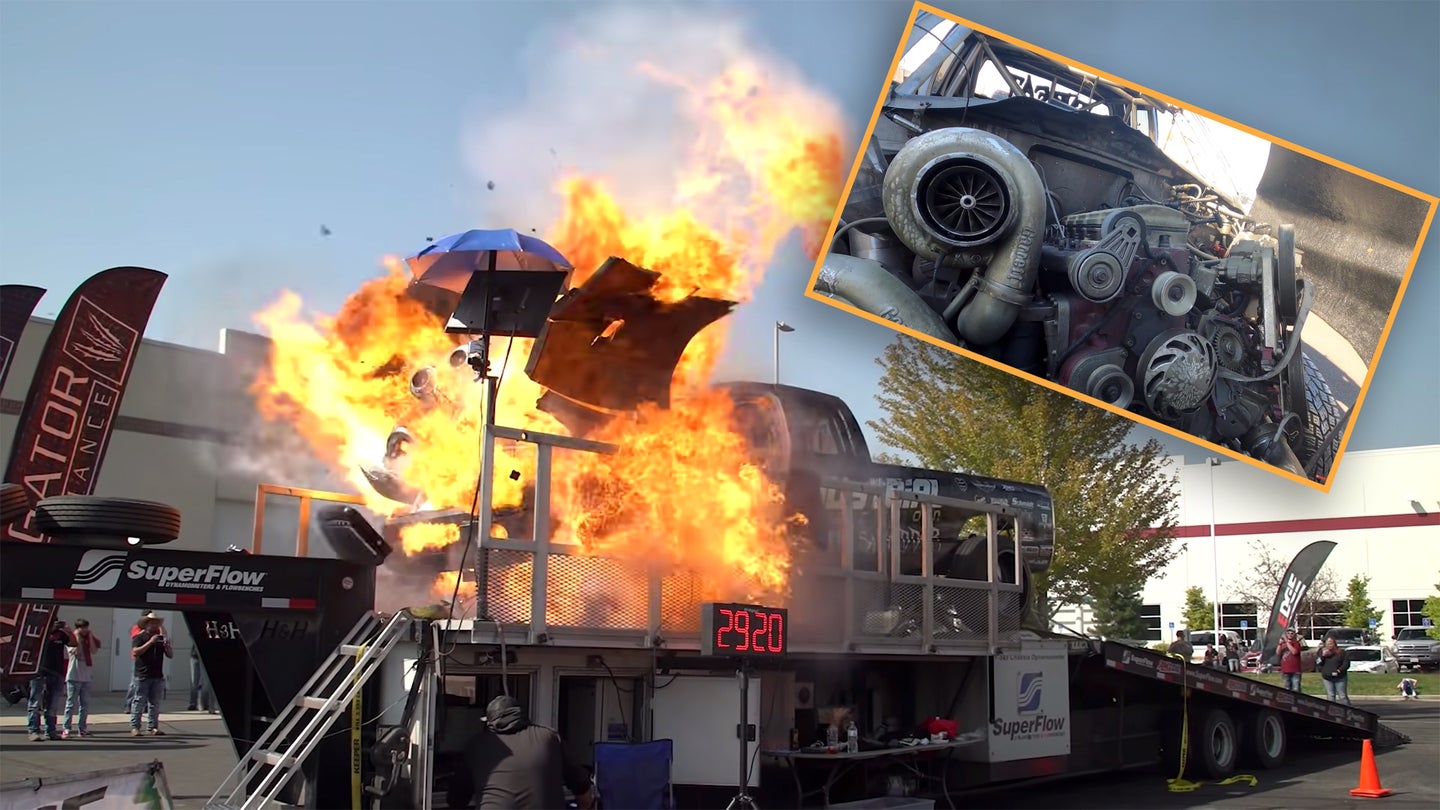 You might've seen that 3,000-horsepower Dodge Cummins diesel that came apart on the dyno back in September—we covered it here and the original video got shared around the internet a gazillion times, give or take. Amazingly, the driver was okay aside from some burns on his arm, though the same couldn't be said for the truck. We don't always get a close-up look at catastrophic engine failures but in this case, we do. And it's nasty.

For background, here's the blast from a couple different angles:

Now that you're up to speed, Industrial Injection posted a video with the rig's owner Shawn Baca giving a run-through of the incident, as well as a tour of the now-battered Dodge. Aside from the explosion itself, the first peek we get at the carnage is a cooler full of parts—and not just engine parts. There are brake and suspension components mixed in too, but they're all hard to identify at a glance.

Some wasted performance parts are still attached to the truck, albeit loosely after the massive fireball. The lightweight front clip was totally shredded by the incident, and the Cummins straight-six now sits cockeyed in the engine bay. A pair of compound Garrett turbochargers lay beside the head, and the built 48RE transmission is toast despite holding up to prior runs under crazy load.

As for the interior, everything touching the dash and firewall was blasted to pieces. The transmission tunnel was peeled back and the drag-spec shifter was slung somewhere in the cab—Baca's not exactly sure where. He was hanging onto an overhead strap when the truck went boom, and a friend was sitting beside him on a plastic crate. It's hard to believe they both escaped without any major injuries, especially after seeing how much shrapnel went airborne during the split-second failure.

At this point, it's hard to say what can be salvaged from the Dodge for a future rebuild. Baca talks about it in the video's closing minutes, and it seems like they're going through the process now of weeding out what's good and what's bad. It'll take a ton of work to get "Master Shredder" back to its former glory, but if anyone can do it, it's the crack team at Industrial Injection. They've built some pretty rad rides, after all.

What happens when a diesel engine decides it wants to be a rocket instead.

A two-stroke Detroit gave its life for this.