What happens when a diesel engine decides it wants to be a rocket instead. 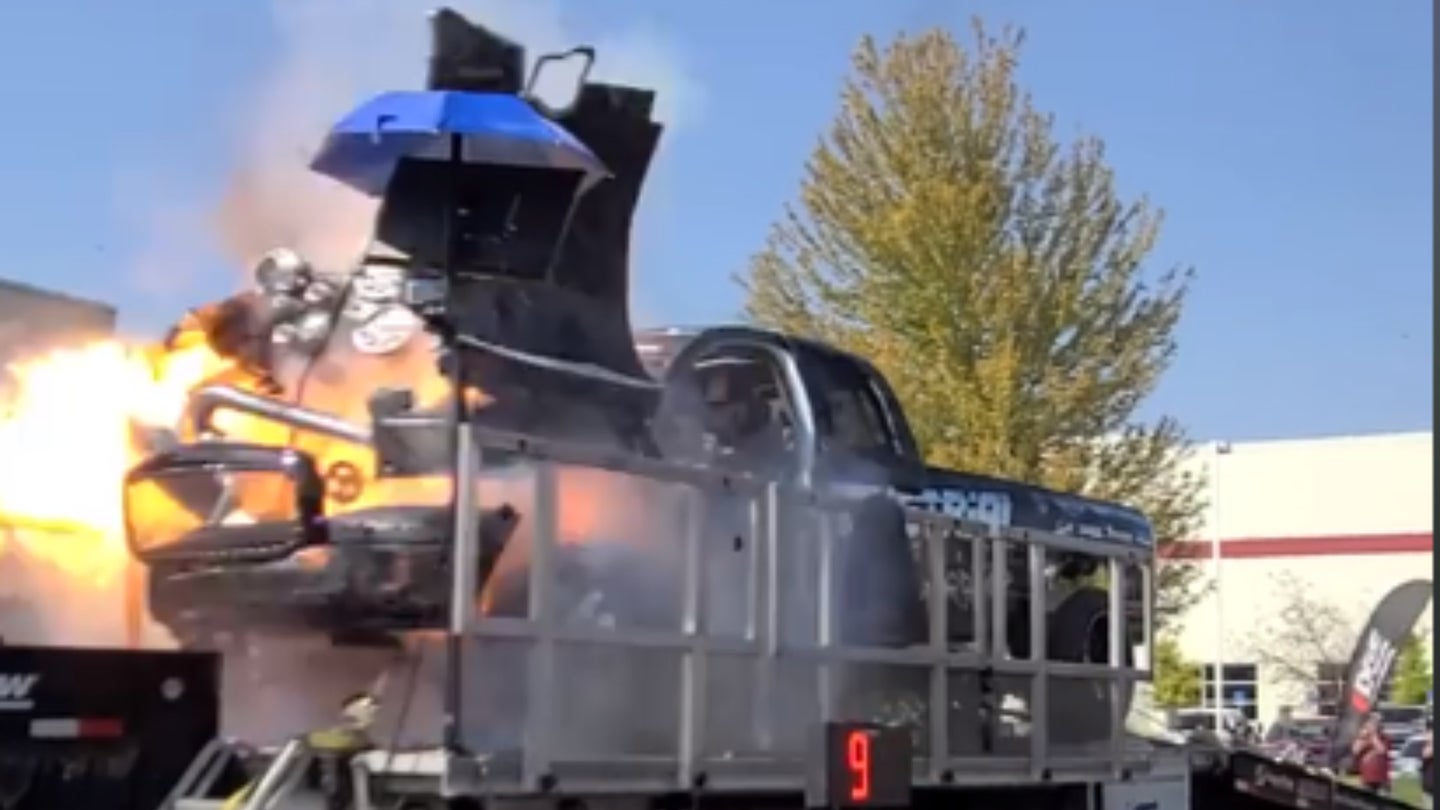 Ogden, Utah, witnessed the annual gathering of coal-rollers on Saturday's Weekend on the Edge Dyno competition. It's a motoring event that's been described by Diesel Tech as a celebration of "all things diesel." This year, the event was limited to an all-day dyno competition attracting some of the country's most powerful diesel trucks to flex torque stats on the dynamometer. How do you win a dyno competition? It's essentially a race to see which vehicle can deliver the highest performance rating. But things don't always go as planned.

UPDATE 9/21 8:30 a.m. ET: We've learned that the driver did, in fact, suffer some injuries, but none were life-threatening. Per the truck owner's Instagram story, he is out of the hospital and expected to make a full recovery.

Watching these tuned turbo-diesel engines give their best battle cries while fighting the dyno's wheel straitjacket's restraints can be good-old-fashion gearhead fun. However, this Facebook post from the Weekend on the Edge event shows what happens when a diesel engine decides it doesn't want to be an engine anymore and hits the self-destruct button.

The video was posted by Facebook user Randy Reyes, showing a late-model Ram Cummins diesel truck running on the dyno. According to Reyes' Facebook page, he builds transmissions for high-performance diesel trucks. The post description states that the truck had already made a "clean pass," celebrating its 48RE transmission for holding up against the highest horsepower rating recorded for a diesel. The post's tone goes from a high note to a free-fall of horror as the video shows the absolute worst-case scenario for an engine failure.

The video starts with the truck running steady before getting on the power. Within moments of whining up, the Cummins diesel decides to use the truck's chassis as a launch-pad. It shoots out of the engine bay like a missile, blowing the hood off the truck like it was made out of cardboard. Turbo spun flames devour the entire front end of the truck as the driver jumps out seemingly unharmed.

Crews quickly run to put out the fire with fire extinguishers, and you can see the charred remains of what used to be a Ram truck before the video ends. There are no details as to what went wrong. Thankfully, nobody was injured considering how many hot metal bits were sprung from the exploding engine bay.