This Diesel AWD Motorcycle is a Two-Wheeled Apocalyptic Frankenstein 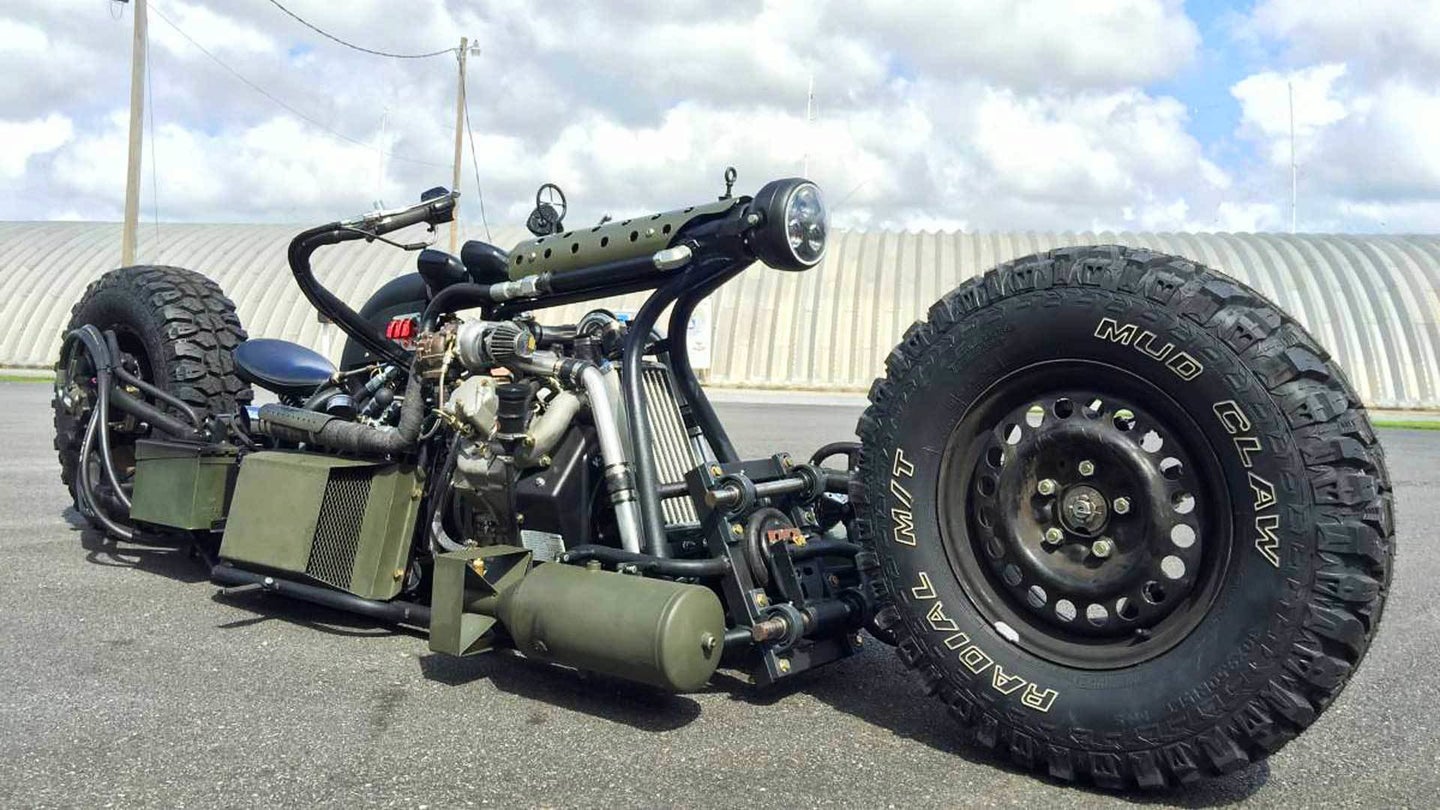 There are more than a few reasons why diesel-powered motorcycles aren’t mainstream. Diesel engines are generally heavier than their gas counterparts, and in order to get decent performance out of an oil-burner, it pretty much needs to have a turbocharger. A turbodiesel in a motorcycle is just too heavy and hard to package to be viable for production bikes.

Good thing this Frankenstein before us is the exact opposite of a production build. Diesel tech and mad scientist Sam Turner created an 11-foot-long custom motorcycle powered by a twin-turbo diesel V-twin. Oh, and it’s also all-wheel drive and has airbag suspension combined with coilovers. This video from Discovery recently resurfaced and got our attention. Check it out this monster:

The assortment of different vehicles and kitchen appliances that donated parts to this thing is insane. The engine is a Yanmar 840cc diesel V-twin from a Sunbelt cement mixer. Normally, that wouldn’t have enough grunt to power a motorcycle like this adequately, so it’s fed by two RHB31 turbochargers which use an intercooler from a Suzuki Swift.

To make this thing all-wheel drive, Turner designed a hydrostatic drive system. That means the wheels are turned hydraulically rather than one of the more traditional methods like a chain or a driveshaft. Turner used a little Buell-inspired engineering by using a hollow frame, but instead of putting fuel in it, it’s used as a hydraulic fluid tank for turning the wheels. The hydraulic gear pump was sourced from a log splitter.

In lieu of a kickstand, this monster has adjustable air bag suspension with coil overs and just sits on its frame rails when it’s parked. The bike has two 2,500-pound air bags that can raise the bike up 12 inches. The air tanks for the suspension are mounted on the sides of the bike and fashioned to look like bombs.

A few other custom touches include wheels from a Toyota Camry, a jerry can fuel tank, an ammo box for the battery, an even a P-trap from a kitchen sink to connect one of the turbos to the engine.

It’s too long and too heavy to control like a normal motorcycle, so instead of a traditional handlebar, it has control arms like on a speeder bike from Star Wars or a zero turn lawn mower. When you push the control arms, cables connected to the rear suspension and front spindle tell the bike to turn. It might not be the most practical or best-performing motorcycle, but it’s certainly one of the strangest and we love it.

An all-inclusive family-oriented motorcycle show with women at its core.